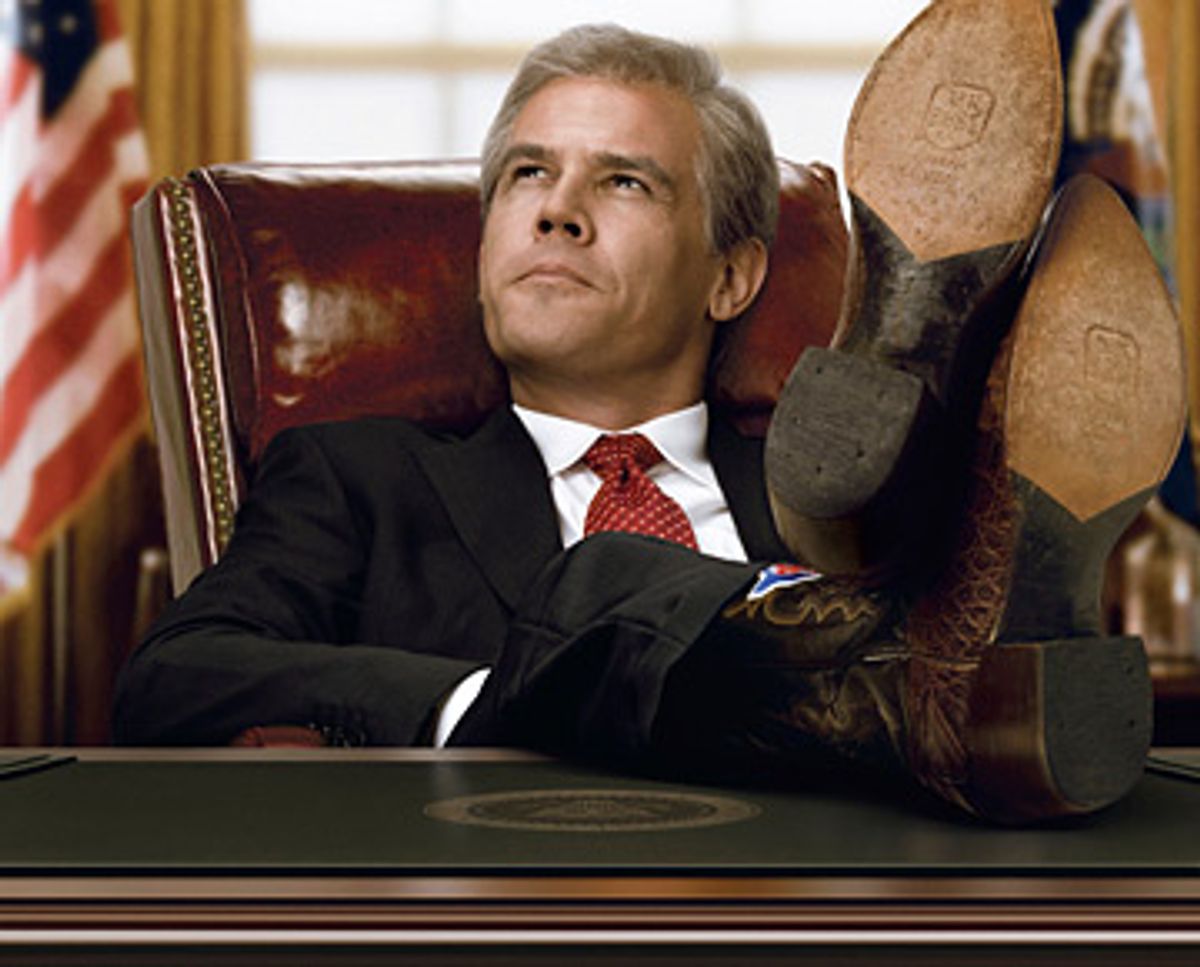 There's nothing overtly or even subtly disreputable about Oliver Stone's "W.," which is exactly what's wrong with it. I admit that my hopes were probably too high: In these twilight days of the George W. Bush administration, I find my anger intensifying rather than abating, and I was hoping "W." would be a more cathartic exercise than it is.

Stone is sometimes a fine director and sometimes a total nutball; sometimes he's both at once. But "W." needs more nuts and less finesse. That's not to say the movie is exactly subtle -- this is an Oliver Stone picture we're talking about. It's just that Stone and screenwriter Stanley Weiser seem to be torn between duty and impulse: Stone, who has earned plenty of accolades for ponderous, heavyweight pictures like "Nixon," may have felt compelled to deliver a historical document, something that will stand for the ages. But he also tips his hand frequently enough to let us in on his true feelings about our 43rd president: Stone leaves no doubt about his meaning when he shows his characters -- Bush, Rice, Rumsfeld, Franks, Powell, et al. -- trooping across a field in Crawford, Texas,  as the theme from the '60s TV show "The Adventures of Robin Hood" tootles in the background. It's when Stone engages in shameless editorializing -- when he lets his freak-flag point of view fly, rather than tempering it -- that "W." is most entertaining and most vital. The rest of the time it feels too much like awards bait: stiff, arch and knowing.

Stone and Weiser arduously poke into every corner of the W mystique, and their lead actor, Josh Brolin, follows fearlessly. The picture is a series of interlaced flashbacks, some fairly recent, others delving further into the back story (which is mostly factual, albeit enhanced by imagined details). We see young W as a Yale undergrad being inducted into a fraternity, one of numerous young men engaging in the thinly veiled homoerotic ritual of being stripped down and tied up and having liquor funneled down their throats. When young W lands in jail, Poppy (played, in a sympathetic and beautifully focused performance, by James Cromwell) gets the phone call asking for help -- and grants that help with a telling reluctance.

The picture hopscotches backward and forward, covering W's wiggly-waggly entry into politics (at one point, his greatest dream is to become baseball commissioner), a trajectory driven seemingly as much by happenstance as by ambition; his days of playing poker and drinking with his Texas buddies; his masterminding of the Iraq war, and subsequent attempts to manage it, with his Cabinet (more on these merry men, and woman, later); his early years with Laura, a supportive wife who, as she's played by Elizabeth Banks, sees everything and says nothing; and in between all that, numerous scenes in which he crumples under the only semi-approving gaze of his father.

Stone and Weiser pack a lot in -- too much. In trying to create a document for all time, they've made a picture that drags aimlessly in its last third. And while the scenes showing the Cabinet's Iraq war strategizing are reasonably well dramatized, I was left with the feeling that Stone was rehashing much of the same stuff we've already seen in documentaries like "No End in Sight" or read in the newspapers: These sequences would be more effective if he'd streamlined or even stylized them.

Because the moments in "W." that approach greatness are those in which Stone allows himself the luxury and the privilege of an artist: the freedom of stylization, as opposed to strict adherence to everyday logic. There are scenes in "W." that are beautifully played and shaped, and even though they're small scenes (much smaller than the elaborate Iraq war strategizing sequences), they embody the most potent parts of the George W. Bush story. A scene in which W and Dick Cheney (Richard Dreyfuss) talk torture -- although, of course, they barely mention the word -- takes place over an informal lunch between the two. The scene is brilliant and powerful for the way it asserts that history happens in haphazard moments: Significant words are often tossed around casually, even as sandwiches are being gobbled and soda is being guzzled. (At one point during the conversation, W refers to Guantánamo as "Guantanamera" -- just one of the ways in which Stone and Weiser use W's recurrent malapropisms as loony poetry.)

It's in the smaller scenes that Stone digs most deeply into the mysteries of the man himself: At one point W summons the man who helped him along on the path to religious redemption (he's a composite character, played by Stacy Keach, who looks alarmingly like Larry Flynt) to announce that God has told him it's his mission to become president. Elsewhere, W pouts and balks when the powerful men around him -- especially Karl Rove, played with slithery, unctuous bravado by Toby Jones -- try to put words into his mouth. He wants to be the visionary, the decision maker, the leader -- he doesn't want to be seen as a puppet. That's a shrewd observation on Stone's part, and one that flies in the face of the common view that W is just a pawn, a puppet, surrounded by a bunch of smart, manipulative guys. If W is a pawn, then he's not responsible for his actions, and Stone's view suggests, aptly I think, that the younger Bush is an extremely shrewd individual, possessed of the kind of sneaky smarts that don't necessarily come with book learning.

Because, as we all know -- and as Stone reminds us -- W has never been so hot in the book-learning department. Stone and Weiser use that fact to cut a small, fascinating window into the life of George and Laura Bush, maybe because, like many of us, they've often asked themselves, "Why?" That is, why would a seemingly intelligent woman, who'd worked as both a librarian and a teacher (and who, it appears, was far more politically liberal in her younger days), fall for a semi-literate Republican cowboy type? This is one place where Stone attempts to answer a question subtly, and the approach works.

Banks plays Laura Bush as a woman of mystery, but her silence isn't the dumb, complicit sort: In the scenes set in W's drinking days, she eyes the level of liquid in the whiskey bottle with a scientist's precision. And in the scene in which Laura and W meet -- a friend sets them up at a backyard barbecue -- she at first resists talking to him, knowing that their politics won't square. But by the end of the sequence, she's won over by his fumbling, regular-guy charm. Banks is so likable here that I found myself silently urging her character, "Run! Run now, before it's too late!" But the scene is played in a way that underscores the joy and tragedy of so many human relationships: Sometimes sexual chemistry carries the day, even when the parties involved know better, which is perhaps, in real life, the case with W and Laura. (To those of you who may have lost your appetite after reading the words "W" and "sexual chemistry" in the same sentence, I apologize.)

I know it's probably taking the artistic high road to view George W. Bush compassionately. But I'm just not ready for it right now. When it comes to Bush, I prefer the low road. "W." is more enjoyable and more effective when it's crazier, more exaggerated, like a Christmas Pantomime. In casting and directing his actors, Stone seems to have  followed his baser, truer instincts: He allows them plenty of wickedness, providing space for their performances to blossom in marvelous, insightful, almost expressionistically joyous ways. There's Jeffrey Wright as Colin Powell: The incredulousness on his face, as his cronies embark on engineering a war he knows can't be won, says more than a hundred lines of dialogue could. Richard Dreyfuss doesn't miss a single insidious detail in his portrayal of Dick Cheney, right down to the way he peels back his lower lip to reveal those tiny Chicklets of evil masquerading as lower teeth. Thandie Newton is frighteningly perfect as Condoleezza Rice; she wears a constant sneer, as if she were perpetually haunted by the smell of rotten eggs. Scott Glen doesn't bear much physical resemblance to Donald Rumsfeld, and so he instead pulls the performance straight from inside. When he utters lines like "Death has a tendency to encourage a depressing view of war," they come from the heart -- and that right there is terrifying.

Bruce McGill channels the baggy-eyed exhaustion of George Tenet; Ioan Gruffud shows up as perpetual schoolboy Tony Blair. And Brolin gives a performance that starts out as mere impersonation -- at the screening I attended, we all cackled at its precision -- and builds into something broader and deeper. Brolin captures the essence of that privileged swagger, that "fake it 'til you make it" braggadocio that sometimes (though not always) attends powerful men, so that as George W. Bush begins to believe in himself, we begin to believe more and more in him too -- or to understand, at least, how on earth this seemingly hapless character could ever become president.

Brolin also allows us to see the lingering self-doubt in W's eyes. In real life, I'm sure that doubt is there, and someday I might want to hear about it -- just not right now. I suppose the "W." glass is half-full or half-empty, depending on how you look at it: I wanted more wickedness and outrage from Stone, but for some, the restrained dusting of nastiness he gives us may be enough. Still, it's clear Stone grasps the enormity, and the dangerous affability, of his subject. In "W.," Bush grumbles about Saddam Hussein, muttering, "He's always misunderestimating me." Stone may not lead the charge against George W. Bush as viciously as he might have. But he doesn't misunderestimate him, either.