The end of "Opus"

Berkeley Breathed explains how our coarse national dialogue led him to end his strip. But what fate awaits our beloved, big-nosed hero? 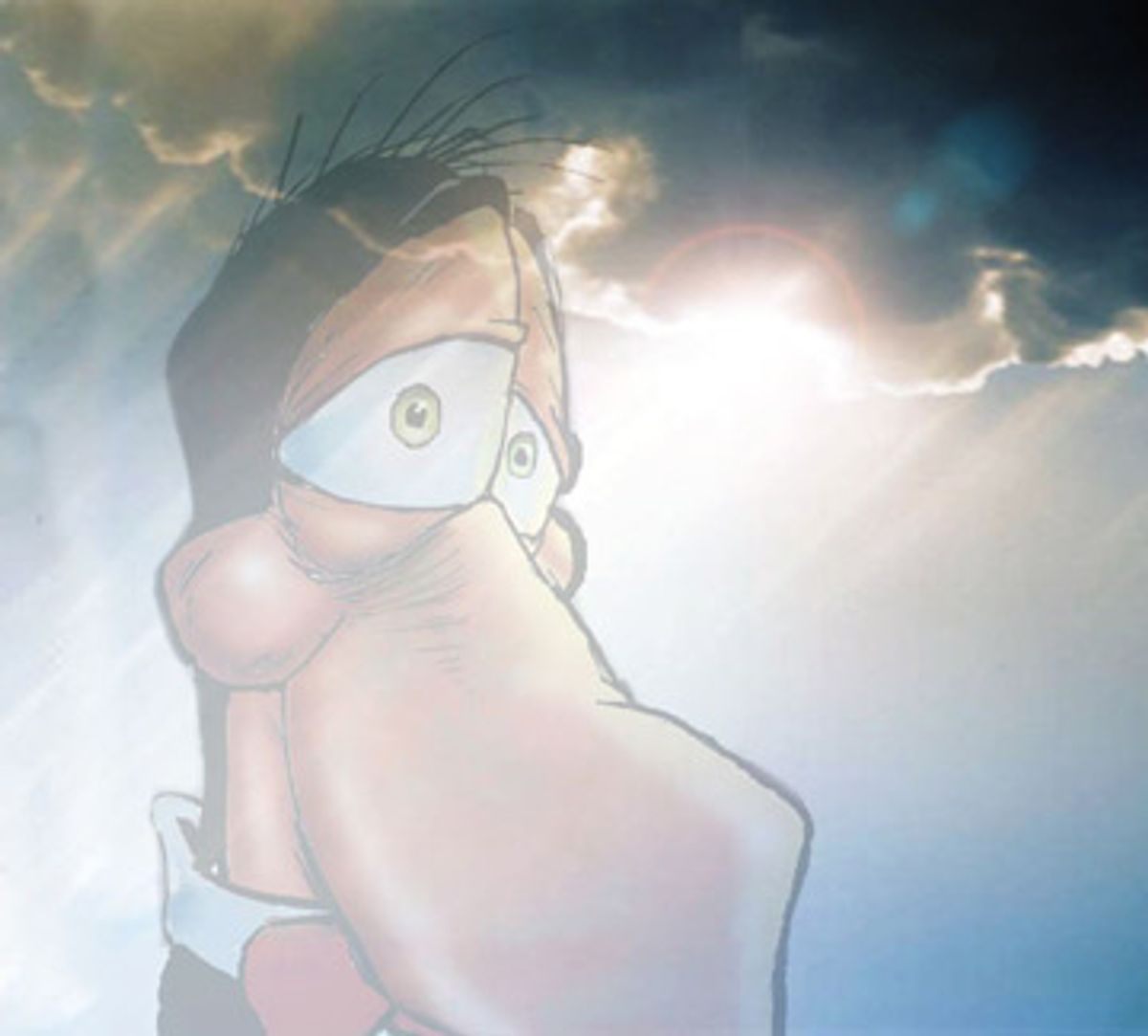 As the country excitedly awaits our great quadrennial political climax, a smaller subset looks toward the first week of November with great anxiety and dread. On Sunday, Nov. 2, the comic "Opus" will end. Worse yet, creator Berkeley Breathed has made it clear that the strip's namesake will, in that final strip, find his "final paradise."

Sure, it's been an unnaturally long run for a penguin. Opus, who started with a bit part in Breathed's Pulitzer-winning "Bloom County" (1980-89), starred in "Outland" (1989-95) and finally took center stage in "Opus" (2003-08). But for those of us accustomed to seeing our own thoughts -- and fears, hopes and simmering anger -- take flight in the broken-nosed face of a penguin every week, there's no preparation for his exit, only mourning.

Breathed says it's the anger that led him to close the book on "Opus," that the increasingly nasty political climate has made it too difficult to keep his strip from drifting into darkness. Breathed has described his work as a hybrid of "Peanuts" creator Charles Schulz's gentle humor and Michael Moore's crusading social justice. Perhaps losing touch with his inner Charlie Brown, Breathed has said that "a mad penguin, like a mad cartoonist, isn't very lovable," and wants Opus to take his final bow before bitterness changes him forever.

As for Breathed, he says he will turn to other projects, such as his children's books. His latest, "Pete & Pickles," is just out, a delightful love story of sorts between a practical pig and a whimsical circus elephant.

He answered a round of our questions this week, through e-mail, about Opus' end, rumors about Breathed's own health, and just what, precisely, will happen to our beloved penguin in two weeks.

You've said that you're ending "Opus" because you believe "We are about to enter a rather wicked period in our National Discourse," and that it will make keeping the successful tone of the strip impossible. Why do you think that things will get worse -- especially after the acrimony of the past eight years?

We're not a movie. In most aspects, there's no arc to the human story. Only a line heading upward. For nearly everything. In this case, the coarsening of the National Discourse. We aren't returning someday to any sort of golden era of political civility. The line heads heavenward and has been since the Republic started. And with the intersection of two rather dramatic dynamics -- the cable and Web technology allowing All Snark All the Time ... and the political realities of No More Free Lunch in America, it will spike in the coming years like Don Draper's sex life, and I hereby pledge that that's the last pop reference I use.

Aren't dark times exactly when satire is most needed?

It's not so much dark times now, as profane and loud. Satire you'll have, oh dear me, indeedy yes. "Vomitous" and "awash" are two words that come to mind. It used to be that everyone would be famous for 15 minutes. How antediluvian. Rather, everyone will now want a satirical YouTube film with 15 megabytes.

Satire we'll have. Rather, the real dearth in our world will be sweetness, comfort, thoughtfulness and civility. If I could do "Peanuts," that's what I'd be doing. Alas, I've tried. And oh, you get way, way richer.

There have been moments in the past few years when "Opus" upset your syndicate. (Specifically, this cartoon in 2007; and this cartoon earlier this year, which the Washington Post Writer's Group refused to even distribute.) How often in your career had that happened before? And is it more of a reflection of your work changing, or the climate that you're now creating in?

"Bloom County" had five times the edge of the work I do now. In 1986 I had a cockroach scream, "Reagan sucks!" in print size that took up the entire cartoon box. Nobody blinked -- 1,000 newspapers, quiet as a mouse. Now I draw a woman wearing a Muslim scarf, and the frantic publisher of the Washington Post Co. is on the phone at 9 p.m. telling me -- I am not making this up -- to adjust my character's hair so she doesn't look too unkempt.

I will miss the crinkly mass of pressed dead tree held aloft over my Caesar salad and iced tea at the corner cafe.

After your May 18 strip, in which you announced that you have spasmodic torticollis, there's been a fair amount of speculation -- especially among Salon readers -- about how bad your condition actually is; about whether it's contributing to the end of "Opus," and much more. Can you fill us in on your health?

It's far too big a cliché to quit for health reasons. Truly, I'm fine.

I'm quitting to spend more time with my family.

Your audience has, by and large, mostly read you in newspapers. These are far less vital times for newspapers than when your career started. What has that been like -- having your work distributed in what seems, increasingly, like a dying form?

Maybe you saw the YouTube of the kid at Halloween saying precisely that to the TV reporter when she asked what he thought of being made up as a zombie. It's a perfect dodge from unpleasant candor.

Do you think cartooning itself is a dying form, now that there are fewer news outlets for young cartoonists to get their start? Or will it evolve into some other form? And if so ...  any clue what that is?

They'll just be much harder to find.

The very, absolute last comic strip characters destined to become true household words across America were invented 23 years ago: Calvin & Hobbes. There are and will be no more new ones.

That's a technology and cultural issue. Not a talent issue.

Your children's books seem to appeal to your gentler, Charles Schulz side. But how -- without Opus -- will you exercise your Michael Moore side?

I'll be on my couch Sunday mornings screaming at Brokaw and Stephanopoulos to call out the blathering bastards on their stupid fucking talking points and pin the dancing, lying, spinning Tasmanian Weasels down about something, ANYTHING for Christ Bloody Sake THE COUNTRY IS GETTING STEERED INTO CHAOS AND INSOLVENCY AND WAR BY ITS UNREAD UNINFORMED DULLARD SHEEP CONSTITUENCIES AND YOU JUST LET THE CANDIDATE SAY ONE MORE TIME WITHOUT OBJECTION THAT HE'S GOING TO CUT TAXES WHILE HE CALLS FOR FREE 24 KARAT GOLD FRANKFURTERS TO BE INSERTED INTO EVERY AMERICAN'S ASS JUST BECAUSE BUTT BULLION POLLS WELL.

You see right there why I can't have Opus involved with this anymore.

"Opus" was the third in a series -- beginning with "Bloom County," followed by "Outland." Is this it? Are you ruling out the possibility of ever doing an episodic cartoon ever again?

When you say Opus will meet his final paradise, are you really saying what we fear you're saying? Some of us remember a certain amnesia episode with Opus, which saw him come back to life. Also, I want to remind you what you told us just last year, when asked about rumors that you'd finish the poor little guy off: "I was kidding about killing Opus, by the way. I'd like to walk the streets free from fears of spontaneous garroting ..."

K-k-k-kill? I've never said the K word. Did I? Don't YOU say that. COMPLETELY depressing. He's Passing Into the Ages. A Christian Scientist appreciates the distinction. Opus will be where I'd like to think of him being for the rest of my life ... which will be a small surprise to many readers. And possibly a Sopranos-like disappointment for some, but I simply will not bow to clichés this late in the game.

If nobody guesses it correctly after a bit of investigation, then they're probably still an undecided voter.

Come to think of it, I've given a good clue in this interview.

For the old "Bloom County" fans who take me as a cold-heart cynic about my cartoon, know that I made the mistake of playing Puccini's "Madam Butterfly" at midnight while I was drawing Opus for the very, final, last time last week and I got rather stupid. I'll just leave it said that way. It's an odd business.

Your new children's book, "Pete & Pickles," is getting amazing raves; Publishers Weekly says it has a "a dreamy intensity, a sculptural heft" you've never had before. Is creating books just a more rewarding canvas for you right now?

I mentioned that the coming days will be in extra need of sweetness, comfort, rationality and civility. I'm like Warren Buffett with a drawing hand. I see an undervalued market. As I did in 1981, actually.

"Pete & Pickles" made me smile while I painted it. My kids found me constantly grinning like an idiot as I drew. I often grinned drawing the comic strips, too. But it was a bit like the Joker's in "Batman." It begins to hurt after a while.

Stories for children are a refuge from the firefight going on above the foxhole. "Pete & Pickles" is my take on marriage ...  and the wonderful ridiculousness of the concept. But come to think of it ... marriage is a bigger firefight than politics. So much for the refuge theory.

What else do you look forward to doing -- professionally and not -- without that weekly "Opus" deadline looming over you?

Writing smart stories that leave people -- OK, my children-- feeling a bit better about the world at the end. You asked.

Here's a question we asked the last time you spoke to Salon, and it seems appropriate to ask again now: One theme of your work seems to be longing for respect -- a lot of Opus' story is about his uphill battle for dignity, and in "Mars Needs Moms!" Milo starts out frustrated at his "thundering, humorless tyrant" of a mother's lack of respect for him, and ends up respecting her more. Do you feel like you've gotten the respect that's due to you?

You have to be bloody well kidding. I'm a walking laughingstock, battered by ridicule from every corner. I work hard and get paid back with utter disregard, spitballs, jokes about my mustache and a lack of sex. You meant around the house I hope.

Not having this regular gig anymore -- and not having to keep up a respectable appearance for your hundreds of client newspapers -- must be liberating. Is there anything, in your nearly fully free state, that you're dying to say to the world?