Is NBC's "Crusoe" a gay escapist fantasy? Is Starz' series "Crash" as bad as the Oscar-winning film it's based on? Yes, yes, a thousand times yes! 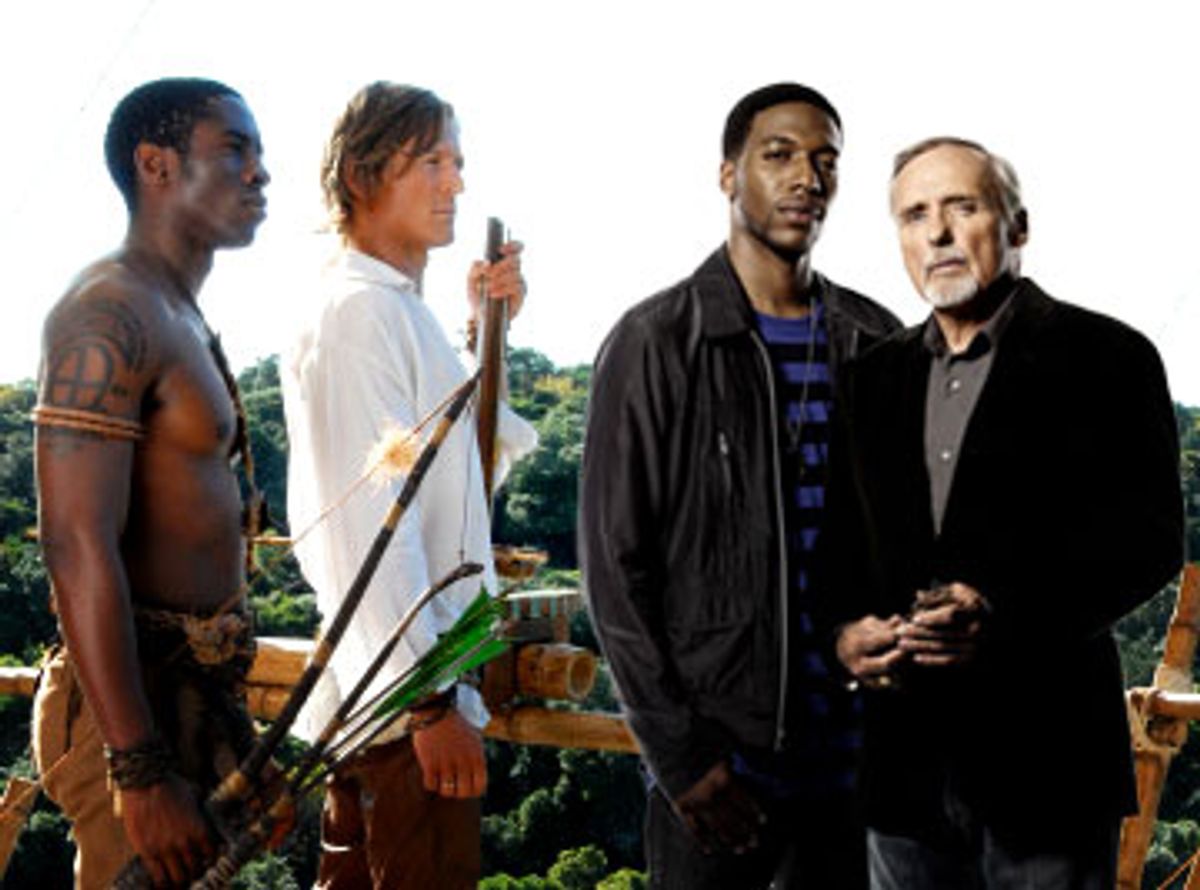 Trust is tough to muster these days, since its perils have never been more obvious: Trust the government and end up in some Godforsaken desert across the seas, launching heavy munitions at sleeping innocents based on bad intelligence. Trust in the institution of marriage and find yourself penniless with three hungry mouths to feed after that dreamy tall-talking bastard skips town for the last time. Trust the stock market and watch your life savings evaporate in a few days, reappear and evaporate again, defying the common wisdom of every investment guru on the planet. Trust in your family and feed on a daily diet of small disappointments as they fail to live up to your enormous expectations of them. Trust your friends and struggle in vain to free them from their favorite bad habits, year after year, until you're all too old and insufferable to tolerate one another's company anyway.

Maybe trust is overemphasized in Judeo-Christian cultures to keep us meek, to make us into followers, to instill a sense of learned helplessness in our bones. Surely the truly independent thinkers among us know better than to give into such fairy tales, instead fostering a healthy suspicion in the people, gods and institutions that claim they'll keep us safe. No matter how carefully we plan, the truth is that we could all find ourselves in desperate straits. Better to cast trust aside and know that when things get ugly, we're on our own.

Or, as the character Friday puts it rather solemnly to Robinson Crusoe in NBC's new series, "Crusoe," "Men are just men. Trust me. Trust your dog. But trust no one else."

Although "Crusoe" (8 p.m. Fridays) may look like a good, old-fashioned adventure drama filled with the sorts of hokey thrills and spills of a '70s-era made-for-TV movie, the theme of trust lies at the heart of this adaptation of Daniel Defoe's classic tale. If Crusoe, shipwrecked and presumed dead by his wife and children, describes his island home as a "prison," it's a prison forged out of suspicion and defensiveness. Crusoe (Philip Winchester) was betrayed by someone close to him, possibly by dear family friend Jeremiah Blackthorn (Sam Neill) (is any character played by Sam Neill not nefarious?), and he's ready to fight everyone and anyone to get back what he's lost.

Not surprisingly, Crusoe has set a maze of traps in the jungle and rigged his treetop paradise with sophisticated bamboo weaponry, barrels of gunpowder, sharpened bits of metal rigged to fly at enemies and lodge in their skin and the like. Friday (Tongayi Chirisa), his right-hand man and "brother," favors knives of various sizes, which he wears strapped to his body. Together, these two are armed to the teeth, prepared to defend their way of life against all unwanted intruders.

Hold on a minute. Is this an elaborate gay fantasy disguised in the widely accepted folds of an age-old classic? Sure, Crusoe says he dearly wishes to return to his family, but maybe that's his way of shifting the focus away from his little love nest with Friday, one that would surely be dismantled by the fearful, gay-hating policies of 17th century British rule. As Friday and Crusoe murmur to each other over candlelight in their treetop dining room, or Crusoe gently teases Friday about his cannibal past, it's tough to imagine either man is really all that anxious to return to life in the real world. Friday announces in one particularly touching scene that he'll follow Crusoe wherever he goes henceforth. How will Crusoe's wife and kids feel when he returns from the island with a wise and strapping black boyfriend in tow?

Hopefully for our star-crossed lovers, they'll never have to find out. Crusoe's flashbacks to so-called better times, in which his mousy wife swoons over him or his blond children sniff their little pig noses in his direction, aren't exactly convincing. Isn't Great Britain rainy and cold most of the time? Those houses in his flashbacks look so dark and misty, compared with Crusoe and Friday's sunshiny treetop nirvana. Shouldn't such a fine-looking man as Crusoe stay in his sun-dappled, leafy fort with his delicious lover man instead? How can we cheer this man in his quest to leave the island?

And why rejoin any society, when they're all so hopelessly corrupt? "My people eat the flesh of their enemies, while your people drink the blood of their God," Friday murmurs to Crusoe, and the two appear forever bonded in their status as willful outcasts.

Plus, if the pirates and soldiers who show up to challenge Crusoe are as hapless, gullible and temperamental as the ones he does battle with in the first episode, obviously he'll forever have the upper hand in this lush green paradise.

But that brings us to the central flaw of NBC's rather ambitious and fairly original dip into this oft-repeated and reimagined text. We're treated to the plot of every episode of the first season, condensed into the first two hours of the premiere: Crusoe encounters untrustworthy strangers who've come to the island to find gold or capture prisoners or mess with Crusoe himself; Crusoe and Friday appear to be surrounded or overpowered, they're taken prisoner, threatened or strong-armed by thugs, their lives are in danger, but just as the wick is lit and the barrel of gunpowder is launched skyward toward their plucky tree-condo, Crusoe launches a brilliant counterattack that leaves the thugs dead and wounded. There's no escape from the island as Crusoe had hoped, so our heroes are left to light candles, and fondly recall their joint adventures over hot tea and fresh oranges. (Isn't there a Leonard Cohen song about that?)

Of course, all the while, Crusoe reminisces about his past with his wife and children (those pale, unsavory, feminine creatures!) and ponders the details of his downfall through flashbacks. But are Crusoe's misadventures on this jungly island really worth our time? How many times can you see arrows flying and muskets being loaded and pointed at treehouses? Do archaic skirmishes, interspersed with one-note "Who betrayed me?" memories, add up to 20 episodes of swashbuckling fun, let alone a long-standing series?

Of course, even sophisticated fare can seem hopelessly lame under the right circumstances. The new drama "Crash" struggles mightily to appear slick and sophisticated and special, but the whole elaborate mess is just as leaden and obvious as the Oscar-winning movie upon which it's based. "Crash" (10 p.m. Fridays on Starz) may boast a cast that includes Dennis Hopper, expensive-looking scenes and film-worthy editing, but the story and the characters leave a lot to be desired.

Mostly what we have here are variations on the same unlikable characters and imbecilic scenarios that we found in the original: Everyone is an ill-tempered, selfish racist under the surface, from Ben Cendars (Hopper turning the aging-hippie parody of himself up to full throttle), the nutty, drug-addled music producer who's isolated, lonely and prone to Phil Spector-like outbursts with guns and knives, to Christine Emory (Clare Carey), the amiable housewife who seems to be the sanest member of her family until a trying situation leads her to show her true, angry, elitist colors.

Then there's Alex (Nick E. Tarabay), the bad lieutenant who's not only married and having an affair with a fellow cop but happily takes freelance work as a paid assassin. Alex is a heartless killer, but we're still supposed to care when he professes his love to fellow cop Bebe (Arlene Tur).

How is it possible for the show's writers not to realize how impossible it is to care about characters who consistently behave like charmless, soulless thugs? Take Kenny (Ross McCall), a smug, wiseass cop who plows his car into the side of a stranger's car as he's rushing to make it to court. Kenny gets out of his car, turns aggressive on the angry female driver of the other car (Inez, played by Moran Atias), then shoves her up against her car to arrest her when she loses her temper. "Your gun is poking me!" Inez growls at him. "That's not my gun, sweetheart," Alex answers. If we wanted to see unsavory miscreants flirting like dimwitted losers, why wouldn't we rent some bad porn and call it a night?

But "Crash" lands somewhere between a public service announcement on the pervasiveness of racism among the populace and a police-themed snuff film. In the second episode (spoilers coming -- don't read this if you plan to watch!), Kenny and Inez finally stop bickering and shoving each other and get down to business of making the love in her car. But first Inez says -- and I quote -- "My ass. You know how to find my ass, don't you?"

Yes, that's right. Not only does she crave this sniveling, sexist cop, but she wants him to sodomize her in the back of her wrecked car. Maybe people this pathetic and depraved do exist in the world, but if so, who really wants to know about it?

But why don't such scenes simply make "Crash" dark and murky, like, say, "Six Feet Under"? A big difference is that "Six Feet Under" had nuanced, thoughtful dialogue. And by the time the characters of Alan Ball's HBO drama found themselves in compromised or even demonically unfair situations (when David was brutally attacked or Lisa was killed), they had already been fully developed. We were invested in their futures, and in finding those redeeming moments that might make their ordeals worthwhile.

"Crash" doesn't have any such life-affirming moments. It's a mire of untrustworthy, annoying characters who lack even a few appealing traits here and there. It wants us to believe that we live in a cesspool inhabited by nasty, self-serving, racist bastards. Maybe that's just Los Angeles.

You may not want to trust with reckless abandon, but "Crash" unearths an equally dangerous perspective, that the world is an ugly place from top to bottom. Better to choose a more soothing, optimistic worldview, even if it's an illusion. Institutions may screw us, our faith in others may be continually crushed. But the resilient among us still dare to hope, dare to believe and dare to ask for more from the world around us -- even if that only means ordering some really good pizza and changing the channel.