A rock star is born 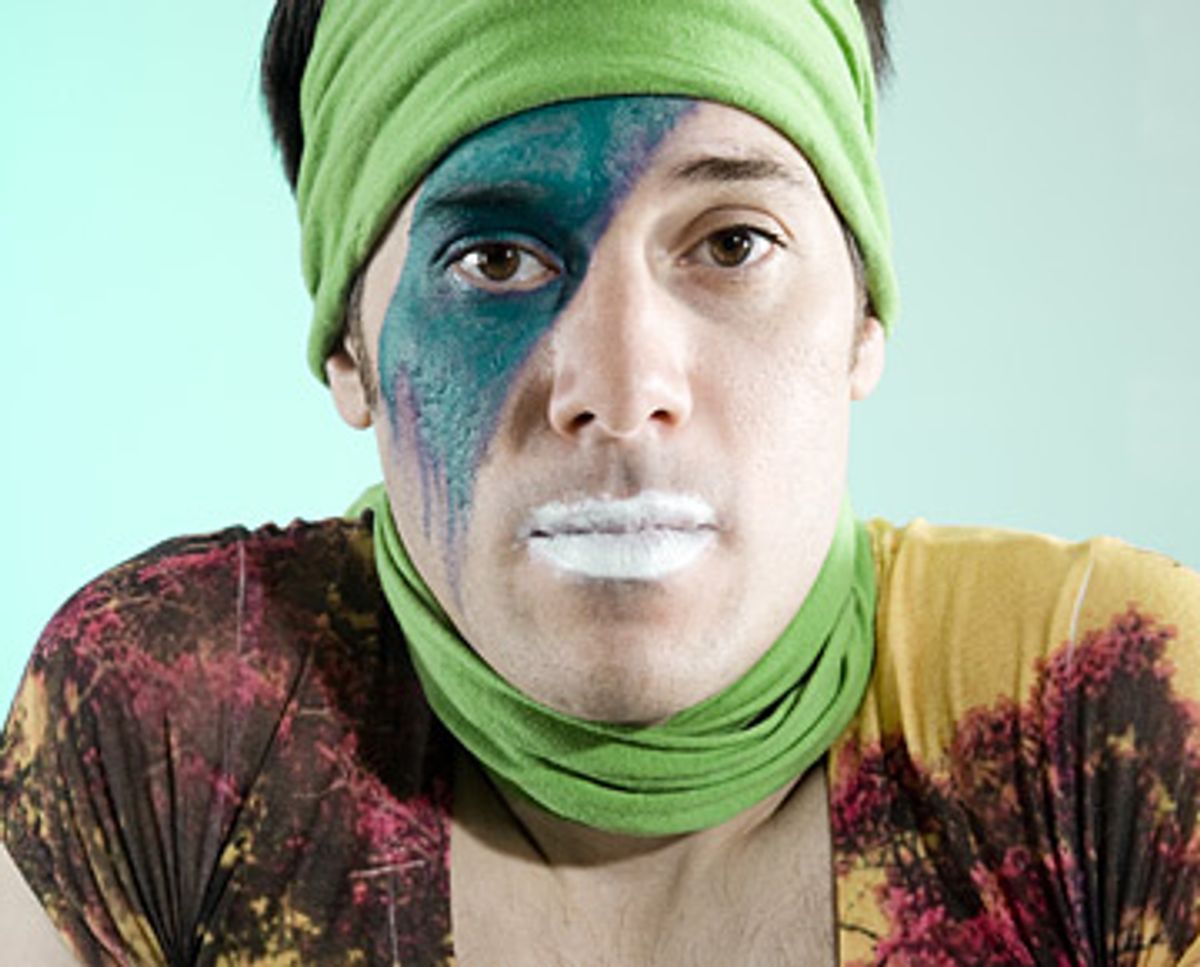 Ten years ago, it would have been hard to believe that Of Montreal would become the most consistently successful act to emerge from the Elephant 6 collective (aka E6) -- a loose group of psychedelic pop-rock bands from Athens, Ga. 1998 was the peak year for E6: Its main bands, like the Apples in Stereo and Olivia Tremor Control, rode a wave of critical acclaim, and Neutral Milk Hotel -- led by the charismatic, nasal brooder Jeff Mangum -- released their second album, a meditation on childhood, nostalgia and mortality set to Salvation Army Band arrangements, titled "In the Aeroplane Over the Sea." The album became an instant cult hit, a status that time has only solidified: Customers of the online retailer eMusic recently voted "Aeroplane" the site's best album, while L.A. writer Kim Cooper's ode to it is the best-selling title in the "33 1/3" series of short books on classic rock albums.

By contrast, a decade ago Of Montreal seemed like the runt of the E6 litter. Led by Athens native and super geek Kevin Barnes, Of Montreal's sound was a variation on E6 front-liners the Apples in Stereo: bright, bouncy, '60s-rooted candy-pop drowning in debt not just to the Beatles and Beach Boys but also to the Banana Splits and Archies. Within a community of whimsical bands, Of Montreal seemed eager to out-quirk them all, giving its releases ultra-twee titles like "The Bird Who Continues to Eat the Rabbit's Flower" and "The Bedside Drama: A Petite Tragedy." It seemed reasonable that if the band didn't work out, Barnes could always get a job at a children's theater -- or maybe a Renaissance Faire.

Cut to the present day. Of Montreal's new album, "Skeletal Lamping," is one of the year's high-profile indie-rock releases. It follows the release of two Of Montreal albums -- 2005's "The Sunlandic Twins" and 2007's "Hissing Fauna, Are You the Destroyer?" -- that garnered heavy critical acclaim and together sold some 175,000 copies -- good numbers for an oddball group on an independent label in the middle of the music biz's free fall. Neutral Milk Hotel's Jeff Mangum, who once seemed mere steps away from stardom, quietly quit the music business without recording a follow-up to "Aeroplane." (This, of course, has only bolstered the album's canonical standing.) In 2008, meanwhile, Of Montreal's Kevin Barnes is quite the rock star; he's even something of a sex symbol. (Approximate number of people who in 1998 would have predicted these developments? Zero.)

What happened? The oldest thing in the world: Of Montreal got a lot better and then a lot bolder. Starting with 1999's "The Gay Parade," Barnes began opening his music up beyond the giggly psychedelia he'd mined early on. The music still evoked a Peter Max fever dream, but Barnes' sardonic lyrics and gleeful choruses indicated something both sillier and sharper-eyed than the band's beginnings suggested. And after tensions within the group came to a head on a 2002 tour, Barnes went back to square one, recording 2004's "Satanic Panic in the Attic" by himself, a working method he's kept to ever since, with increasingly impressive results.

"The Sunlandic Twins" is where Barnes began to stretch out. In musical terms, it's the album where Barnes discovered rhythm, began to concentrate on the low end as much as the top. Its best song, "Wraith Pinned to the Mist and Other Games," is held in place by a rolling bass line and a mechanical kick drum inspired by the insistent grooves of Nigerian Afrobeat pioneer Fela Kuti. And just in case it wasn't obvious that Barnes was looking beyond the psych-pop continuum for fresh inspiration, the album's credits read, "produced, arranged, composed, performed, engineered, and mixed by," with "Prince" crossed out and "Kevin Barnes" written in. Like a lot of other indie-label artists, after a decade of riding the margins, Barnes started to think big.

That ambition became even larger with "Hissing Fauna." Like "Sunlandic," it skipped styles effortlessly -- disco pastiche on "A Sentence of Sorts in Kongsvinger," dub snares and synths on "Labyrinthian Pomp," grinding funk strut on "Gronlandic Edit." Unlike "Sunlandic" (and every prior Of Montreal album), the lyrics dealt explicitly with adult pain -- specifically, the separation of Barnes' marriage (they've since gotten back together). "Hissing Fauna's" centerpiece is "The Past Is a Grotesque Animal," 12 minutes of what feels like a real-time nervous breakdown, set to a dark, insistent rhythm; at one point Barnes says, "Sometimes I wonder if you're mythologizing me like I do you."

Like many performers, Barnes claims not to dwell too long on his work's meaning as he's making it. Fair enough, but it's hard not to hear "Skeletal Lamping" as a continuation of "Hissing Fauna," both in its richly divergent music and its lyrical preoccupations. Take "Gallery Piece." Over a splashy new wave rocker, Barnes recites a litany of the things he wants to do to his loved one with a discomfiting intimacy: "I want to hurt your pride/ I want to slap your face/ I want to paint your nails/ I want to make you scream/ I want to braid your hair/ I want to kiss your friends/ I want to make you laugh/ I want to dress the same." It says something about Barnes' playfulness that he couches his most wounded lyrics inside his most singsong melody. If I didn't speak English I might guess that "Gallery Piece" was a nursery rhyme.

That's the sort of disjunction that feeds "Skeletal Lamping." The album as a whole is fragmented. Barnes created dozens of short segments that he then sifted the best parts from to piece together the album, and many of the shifts are abrupt. But the lyrics match those dynamics. They're alternately pained and droll, jumping from the eerie acoustic "Death Is Not a Parallel Move" ("Don't be afraid, little man, of my troubled mind/ I'm just poisoning you a little") to the slinky funk sendup "St. Exquisite's Confessions," which begins with Barnes singing in his jumpy falsetto, "I'm so sick of sucking the dick/ Of this cruel, cruel city."

A line like that is part and parcel with the stage persona Barnes has adapted of late. Improbably, he's shifted from giddy, sardonic nerd to Warholian glam superstar, inspired, he assiduously tells interviewers, by David Bowie and Prince. This persona seems to be making its way into the songs, as on "Wicked Wisdom," which begins, "I'm a motherfucking headline, but, bitch, you don't even know it." And live, he works the persona for all the sexuality he can wring from it -- which is plenty. Barnes is lithe and good-looking, and he's coquettish in concert; last year in Seattle, Barnes ended the show by turning his shirtless back to the audience and turning his head to blow us a kiss on the last song's final note. Not only is he a geek turned leading man, he's made himself a leading man by stressing those things (wordy put-downs, loopy tunes, Guy Who Thinks Too Much lyrics) that made him a geek to begin with.

Alas, Barnes will never be Prince. Rather, the band Of Montreal most resemble, at least in long profile, is the Flaming Lips. Both bands are veteran psychedelic bands come up through the post-punk underground; both are known for florid, messy stage extravaganzas; both are late bloomers, careerwise. And both have cults that just keep getting bigger, gathering a kind of critical mass as word spreads about the live show. (That's especially impressive, given that Of Montreal gave an early-'00s performance so  tediously ramshackle it drove a mild-mannered friend of mine to consider violence.) The show I caught last year was a sloppy joy: wigs, men in dresses, and, of course, multiple costume changes for Barnes. He's earned them.