Putting out for Barack 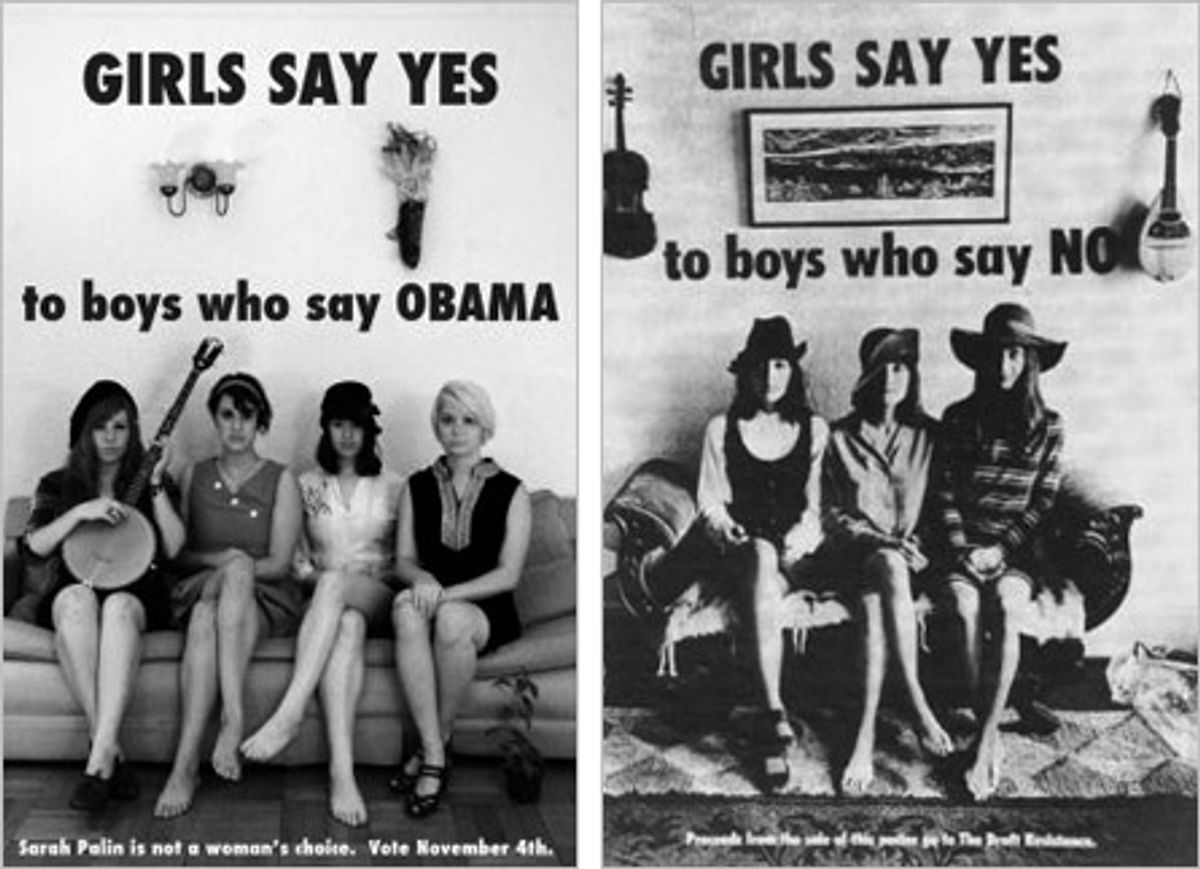 It's a theme as old as ancient Greek theater: Women give or withhold sex in order to achieve some sort of political end. The latest version comes from a quartet of young women who have created a poster that reads, "Girls say yes to men who say Obama." In smaller print, at the bottom of the photo, the women tell us, "Sarah Palin is not a women's choice. Vote November 4th." Their version updates a classic '60s antiwar image of Joan Baez and her sisters, emblazoned with the slogan, "Girls say yes to boys who say n0."

The ladies at Bust are all for the poster, and I certainly have no qualm about its pro-Obama and anti-Palin sentiments. But I have to admit that somewhere between its boring, overdone sexual politics and its hipster aesthetics, it makes me cringe a little bit. And it turns out I'm not alone. I asked a few Broadsheeters whether they found the poster adorably retro chic or obnoxiously retrograde. Here's what they had to say:

Rebecca Traister: Makes me want to put a fist through a wall, put a hammer through my skull and move to France. During the primary, a variation on this was one of the (less overt) vibes cited to me by some college women I spoke to who were considering voting for Hillary: that there was a derisive attitude from boys that anyone who would consider voting for her must be an unsexy feminazi, but supporting Obama made you sexy to the guys. I know it's different when McCain is the competitor, and I realize the suggestion here is about boys voting to impress the women, but still, the idea of any kind of political action being taken to impress the opposite sex -- or that guys would only vote a certain way if a woman promised sex at the end (that's also totally the only way you get them to pay for dinner, incidentally) -- sort of makes me want to drown myself.

Kate Harding: It really bugs me. Both the concept of a vote-for-sex transaction and the "obnoxiously retrograde" notion that women are merely gatekeepers for our own vaginas, not human beings with actual sex drives. We just say no as a matter of course until men do something wholly unrelated to sex (buy dinner, vote for Obama), which makes us decide they're worthy of coming inside us. We certainly don't want sex for its own sake! And that's without getting into the heterosexism. Where's my "Straight girls say yes to, and sometimes even initiate sex with, boys they find attractive for any number of reasons" T-shirt?

Also, if they had to do it anyway, "Girls say 'Yes, we can' to boys who vote Obama" would have been funnier.

Sarah Hepola: It doesn't bother me as much, but it's kind of gross. Are the women in this photo going to say yes to every boy who says Obama? Because if so, they are going to be very, very tired. And sore!

Considering this poster was made, according to Bust, by "a couple cheeky ladies in Brooklyn" -- where I (and Rebecca and Judy!) proudly live -- I would suggest it should be tweaked to read, "Girls say yes to boys who say Obama and also wear skinny jeans and have scruffy hair and buy me Stella Artois while I crochet an adorable bong cozy."

Also, I'm really irritated by the tag line "Sarah Palin is not a woman's choice." Look, I despise her policies, too, but I don't pretend to tell other women what they can and cannot do.

So what do you think? Adorably retro chic or obnoxiously retrograde?