Ashley Todd says she was robbed, and that the assailant then became enraged over her McCain-Palin bumper sticker and scratched a "B" on her face. But there are some questions about her account. 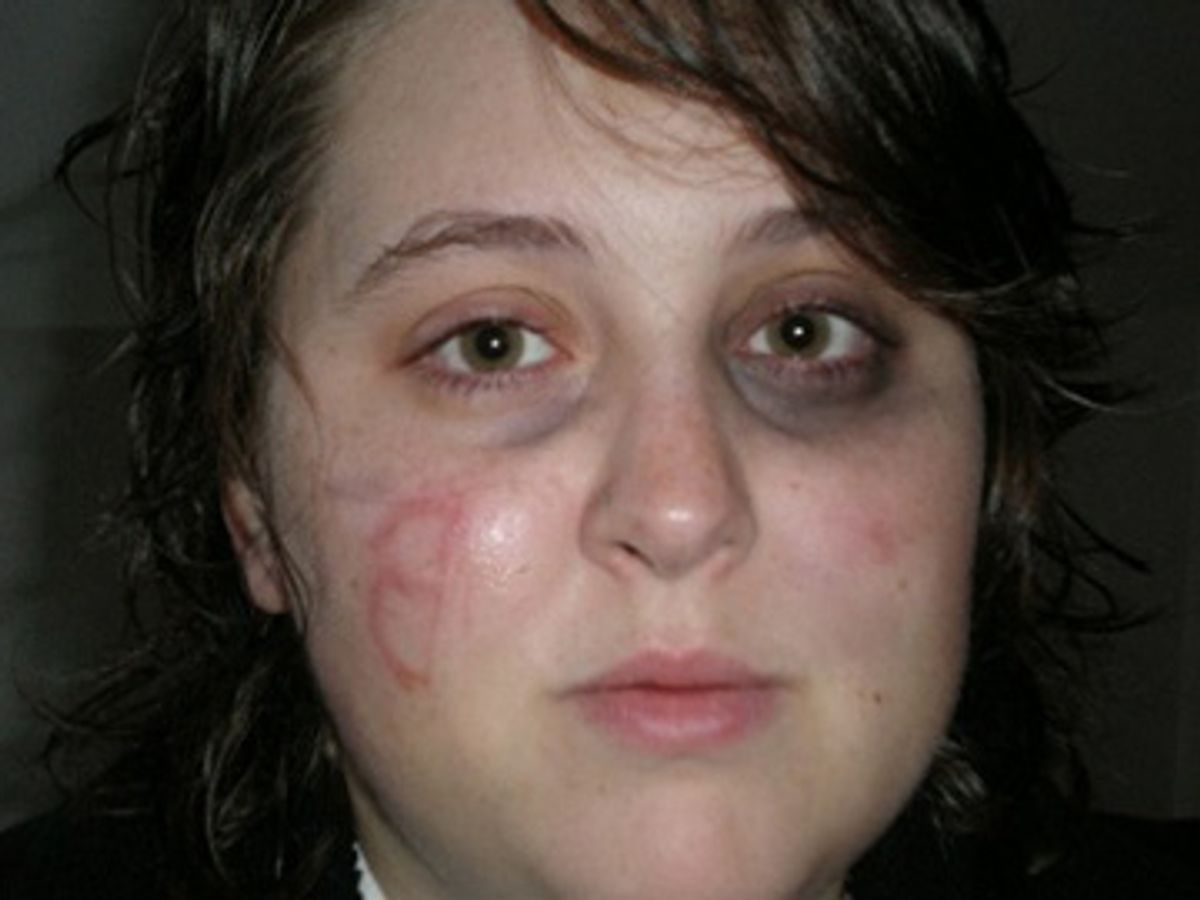 Ashley Todd, a 20-year-old volunteer for the McCain-Palin campaign, has told Pittsburgh police she was mugged and then targeted for further attack on account of her political beliefs.

The alleged attack happened Wednesday night, at a local ATM. Todd says her assailant came up behind her while she was using the ATM, put a knife to her throat and demanded money, and that she gave him $60. But then, Todd says, the robber saw her bumper sticker and attacked her, punching her in the back of the head and knocking her down. Todd told police that the man continued to punch and kick her, saying he'd teach her a lesson for supporting McCain. In a later interview, she added that he said, "You are going to be a Barack supporter." According to Todd, he then sat on her chest, pinning her hands with his knees, and used a dull knife to scratch the letter "B" into her right cheek. WTAE, a local television station, reports that this occurred outside the view of the bank's security cameras.

Todd, who is from Texas and is reportedly not familiar with Pittsburgh, then drove to a friend's house nearby. From there, she called police, and the responding officer followed her and her friend until they found the scene of the alleged attack. She refused medical attention, however, saying she would go to the hospital Thursday. Two senior officials with the College Republicans told HotAir.com that Todd did go to the hospital Thursday morning, where she had what the site reports was "an MRI and/or a CAT scan." The site also says that doctors "believe her cheek will heal fully."

The story came to national attention Thursday afternoon, when it was posted on the Drudge Report. Both John McCain and Sarah Palin reportedly called Todd to offer their sympathy and well wishes, and the Obama campaign issued a statement on the incident.

Since then, though, some people -- conservative blogger Michelle Malkin among them -- have begun to question Todd's account. And the Web site TMZ.com says it has sources inside the Pittsburgh police who say "they have serious questions about the authenticity of the alleged victim who says she had her face cut by a politically-motivated attacker." The site also reports that it has been told "there are several things about the alleged attack that don't add up." Police reinterviewed Todd Thursday night, the Pittsburgh Post-Gazette reports; the questioning lasted at least five hours.  And the Pittsburgh Tribune-Review says investigators plan to administer a polygraph test to Todd, reportedly because her statements conflict with evidence from the scene where she says the attack occurred.

A post-attack photo of Todd that the Associated Press says was not taken by police has been circulating on the Internet. Based on that image, some people on the Internet have been asking why the "B" on Todd's cheek is reversed, as if she did it to herself using a mirror. Others have brought up an incident from the late 1980s, when Morton Downey Jr. claimed skinheads had painted a swastika on his face. His story was similarly questioned because the swastika was reversed.

The photo also shows Todd with a black eye. Salon showed it to Jennifer Province, an emergency room nurse, who says she believes the black eye was faked. The color of it is wrong, Province said, and there's less swelling than typically seen.

This isn't the first time this year that Todd has claimed to be involved in an election-related incident. Earlier this month, she posted to YouTube a video she shot of a janitor at New York's Queens College. In it, she says, "This janitor took down all of my signs ... and tore them apart ... I am really perturbed. He closed off the bathrooms and is making it very hostile."

Salon was able to find some of Todd's personal Web pages, which we're not linking to in order to protect her privacy. What appears to be her MySpace page, which gives her age as 23 rather than 20, is private. But the quote at the top of it is visible -- it reads, "Lying is the most fun a girl can have without taking her cloths [sic] off, but its [sic] better if you do."

Diane Richard, a spokeswoman for the Pittsburgh police, was not available for comment.

Update: Shortly after I posted this, WTAE updated its story on the incident with additional comment from Richard, who said, "We have learned that the victim's statement has a few inconsistencies in it and her statement has changed." According to Richard, Todd now says she isn't sure if it was her bumper sticker that enraged her alleged attacker or a campaign button she wore on her jacket. (Separately, the Post-Gazette reports that she did not originally tell police about the bumper sticker at all.) She has also reportedly added new details to her story, saying she lost consciousness during the attack and also that she was sexually assaulted.

"She indicated that when he had her on the ground he put his hand up her blouse and started fondling her. But other than that, she says she doesn't remember anything else. So we're adding a sexual assault to this as well," Richard said.

Update 2: Todd has reportedly confessed to making the story up. See my follow-up post here for more.