Stop rolling your eyes -- the latest fluffy movie in Disney's powerhouse franchise is a total kick. 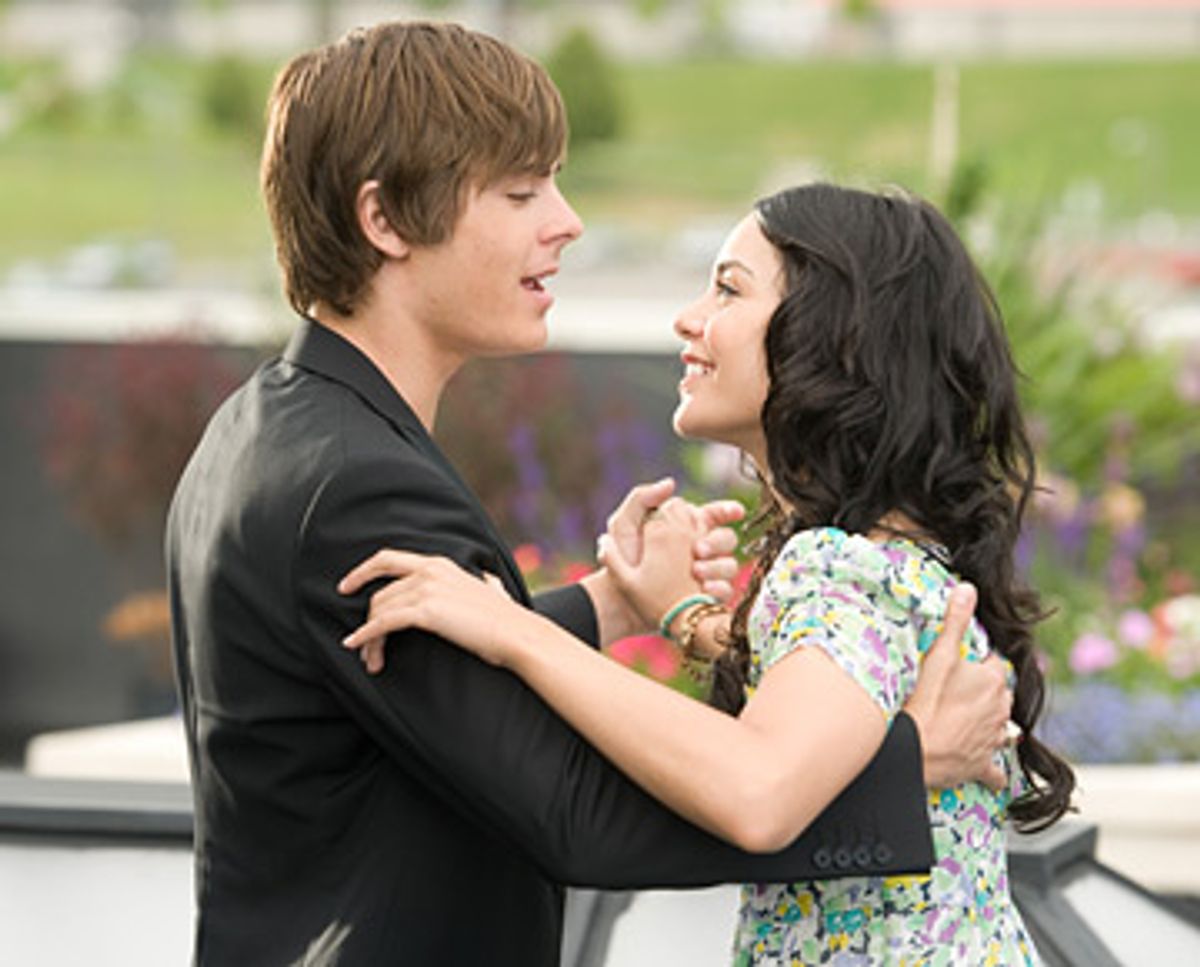 It can be a drag checking out the big cultural phenomena among the younger set, not least because it so often leads to unwelcome attacks of old fogeyism -- you know, pronouncements along the lines of "In my day, we had quality entertainment, like 'H.R. Puf'n'Stuff.'" Even beyond that, though, I don't know how many times I've dragged myself out to see some popular kids' entertainment and wondered, "Why do kids like this?"

But "High School Musical 3: Senior Year" -- a big-screen version of the explosively popular TV movies made for the Disney Channel -- is different. Why wouldn't kids like this? "HSM 3" is extremely innocent and fluffy, romantic in a smooshy way. The movie is light on plot, although the more you get into it, the more you realize it doesn't really need one: Teen heartthrob Zac Efron plays Troy Bolton, a high school senior who's unsure about his future. His girlfriend, Gabriella (Vanessa Hudgens), is heading off to Stanford; he's all set to enroll at University of Albuquerque, not far from home, until he learns he might have a shot at a Juilliard scholarship. (This is a kid who happens to be good at basketball and musical theater.) So Gabriella and Troy spend their final days of high school preparing for the prom, rehearsing for their last big school play, and wondering how on earth they're going to live without each other in the fall, even though, as it turns out, their separation comes much sooner. Meanwhile, the school's snooty starlet-in-training, Sharpay Evans (Ashley Tisdale), tries to steal the spotlight from everyone, while her twin brother, Ryan (Lucas Grabeel), a gifted performer and choreographer, struts around the school in lavender vests and plaid pants tucked into boots, surely a code for -- well, you know.

The fact that "HSM 3" makes a place for a character like Ryan without definitively spelling out his orientation is part of what's endearing about it. This is a movie for preteens, after all: There's plenty of time in the future for "Am I or aren't I?" worries; maybe, for some kids, it's just enough to see a kid on-screen they can relate to, for whatever reason.

And this is a movie that offers simple, buouyant pleasures. The director is Kenny Ortega, a longtime choreographer ("Dirty Dancing" is among his credits) and the director of the unjustly maligned 1992 Disney musical "Newsies," an enjoyable little picture that never had a chance. (The fact that a corporate entity like Disney would even make a pro-labor musical is interesting by itself.) The songs in "HSM 3" may not be particularly memorable, but I wouldn't say they're any worse than the faux-rock toodling of "Rent." And in staging the splashy, effervescent musical numbers, Ortega borrows, joyfully, from a wealth of references, taking bits and pieces from Busby Berkeley and from Bob Fosse, from "West Side Story" and from "Saturday Night Fever."

In fact, the overall vibe of "HSM 3" isn't so far off from the "Let's put on a show!" boisterousness of the old Mickey Rooney and Judy Garland musicals. Since when shouldn't it be fun to spend 90 minutes or so watching good-looking young people, singing and dancing relatively well? I had fun at "High School Musical 3" partly because I got such a kick out of the audience, which consisted largely of preteen girls. Most of my friends who are parents lament that their kids are growing up too fast, that they're no longer allowed to have a childhood, and in general, I can see that it's true: There's no shortage of 11-year-old girls out there who've already donned the uniform of low-rise jeans and belly-baring tops. But in one scene, when Efron peeled off his shirt to reveal a perfect V-shaped torso (we get only the back view -- no nipples!), a number of little girls scattered through the audience giggled with embarrassment. In their innocence -- there was nothing knowing or salacious about their laughter -- they were just so, well, cute. No matter how allegedly sophisticated our preteeners may be, if they can still giggle at the sight of a boy's naked back, perhaps all is not lost.