Should we be covering Palin's wardrobe?

Campbell Brown says no, but Salon writers debate the issue in light of news that the highest-paid individual in McCain's presidential campain is Palin's stylist. 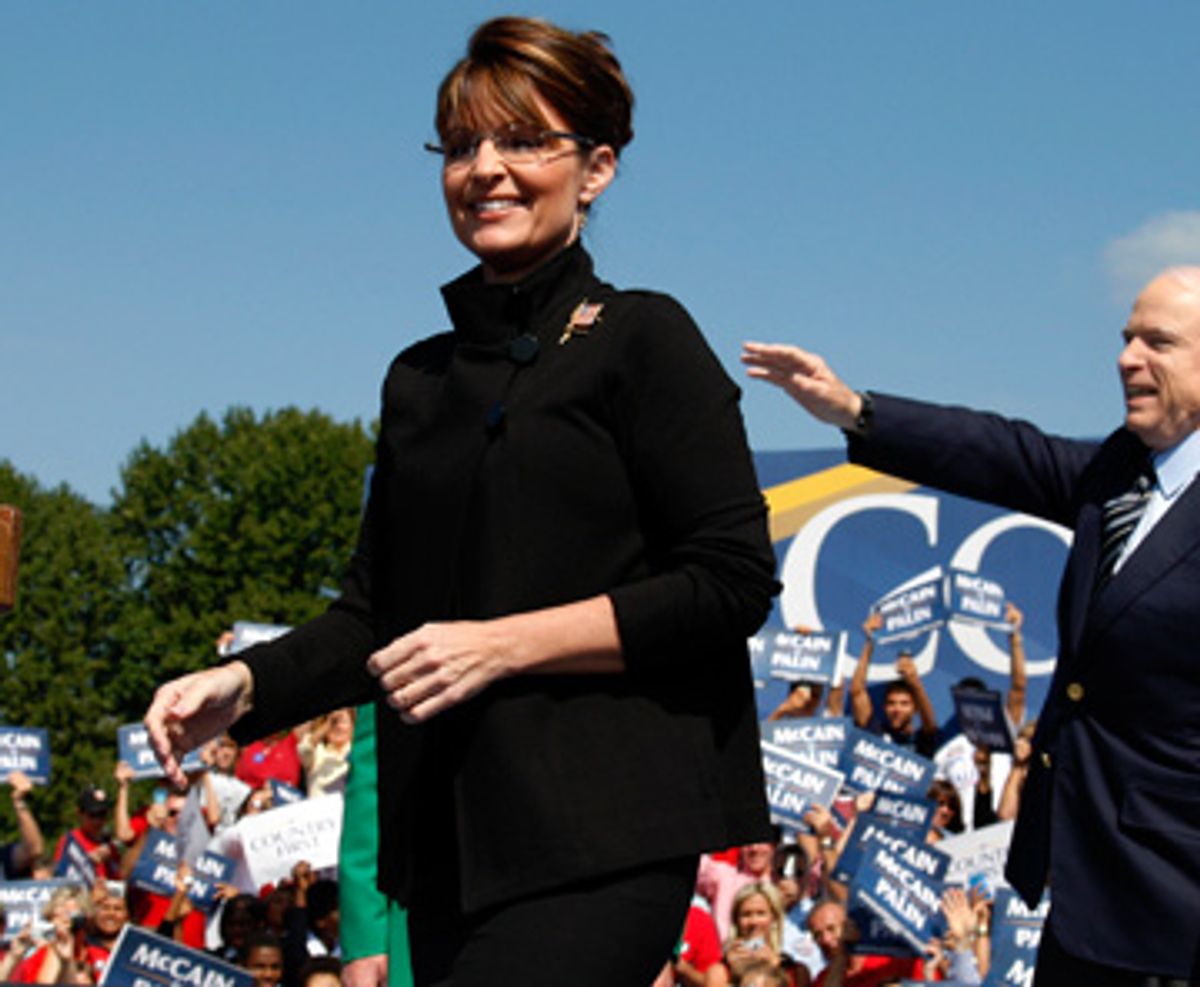 Today, the New York Times' Caucus blog broke the news that the highest-paid person in McCain's campaign for the past two weeks is Sarah Palin's stylist

[Amy] Strozzi, who was nominated for an Emmy award for her makeup work on the television show "So You Think You Can Dance?", was paid $22,800 for the first two weeks of October alone, according to the records. The campaign categorized Ms. Strozzi’s payment as "Personnel Svc/Equipment."

Before you sharpen your Ginsus, however, consider this: Last night, on CNN, Campbell Brown asked the media to stop covering the story about Palin's wardrobe (which Broadsheet had, of course, already covered).

There is an incredible double standard here, and we're ignoring a very simple reality. Women are judged based on their appearance far, far more than men. This is a statement of fact. There has been plenty of talk and plenty written about Sarah Palin's jackets, her hair, her looks. Sound familiar? There was plenty of talk and plenty written about Hillary Clinton's looks, hair, pantsuits. Compare that to the attention given to Barack Obama's $1,500 suits or John McCain’s $520 Ferragamo shoes. There is no comparison.

I asked Salon staffers: Should we stop covering this story? Is it newsworthy that Palin's stylist was paid so enormously well? Why -- if at all -- does this story matter?

The responses are posted below:

Andrew O'Hehir: Once again, I'm going to have my cake and eat it too. No question, Brown has a point -- women in public life are subjected to intense scrutiny of their physique, hair and wardrobe in a way men never are. But when people wrote or blogged snarky things about Clinton's ankles or her pantsuits or whatever, that's all it was -- random sexist bitchiness. No one argued that the specifics of Clinton's wardrobe or toilette were especially revelatory or pointed out some hypocrisy in the way she was packaged and presented.

For one thing, we were all pretty sure that Hillary Clinton was packaging herself, for better or for worse. And that's where the Palin clothing budget becomes relevant. As I said earlier, the GOP made a strategic and/or tactical decision to package Palin as a pop star and to play up her physical attractiveness by dressing her in flattering and extremely expensive designer outfits. I'm not horrified by this in the abstract, and I'm sure Obama and/or his people select his very nice and very not-cheap suits with immense care. They flatter his physique, too, and he looks terrific. (McCain, well, you have to feel for the poor bastard on this front. He can spend a million bucks on shoes made from Peruvian anteater hides if he wants, and God knows Cindy's got the money, but it won't help.)

But of course the media has seized on the Palin fashion budget because A) it appears to undermine her winky, Wasilla Main Street, Wal-Mart-mom stage persona, which as it happens is not resonating outside the Republican base the way they hoped it might; and B) it was a dumbass blunder that speaks to the arrogance and cluelessness of this year's GOP campaign, which just keeps dredging up golden oldies and finding that the audience has moved on.

So while I think there is always an element of sexism in any public dissection of a prominent woman's appearance -- and some of the media will fall into that trap more than others -- this remains a legit story.

Rebecca Traister: My take on Palin and wardrobe: I am just flat-out tired of talking about it. I didn't think it was sexist when it broke as a mini-story (see also: Edwards' haircut, Kerry's botox, McCain's 15 houses) but the four-day fetishization is pushing me to: Move along, folks, the lady bought too many expensive clothes. Nothing to see here. And can't help but feel that the gawking would be less intense and prolonged if it were about a man's wardrobe. But also: There is way more problematic distance between how Palin addresses her real American fans vs. how she legislates on their behalf than there is between how she dresses and how she talks.

Jeanne Carstensen: I agree with Rebecca that "There is way more problematic distance between how Palin addresses her real American fans vs. how she legislates on their behalf than there is between how she dresses and how she talks." Totally.

But I still the media scrutiny is warranted. Sure, sexism puts more pressure on women than men to play the beauty card, to spend extravagantly on fashion, hair, makeup. So it's not surprising to learn those Valentino suits and Manolo Blahnik shoes weren't in Palin's closet in Wasilla but were purchased after she was plucked by McCain for his veep. Same for that hair and perfectly applied foundation. Any politician, and especially a woman, would need a major makeover after being thrust suddenly onto the national stage from a regional one. But still, the disconnect between Palin's populist hockey-mom routine and her current status as a right-wing celebrity complete with GOP-funded fashion entourage is notable. She derides anyone not on the barstool next to her with "Joe Sixpack" as un-American. Since she's so aggressive about attacking others not in her supposed cultural camp, the details about what Sarah "Hockey Mom" Palin actually wears, and how much it costs, are facts voters have a right to know.

Judy Berman: I wasn't especially bothered by the original revelation about Palin's clothing expenditures, but the makeup artist's paycheck gets to me. Though I don't necessarily think the McCain camp should be prohibited from spending that much money on an employee whose entire job is to keep Palin's face looking VPILF-tastic, the decision does say something depressing about their priorities and judgment. You're lagging by a large margin in the polls, voters are hungry to hear something -- anything -- about how your administration would deal with the economic crisis ...  and you're paying the makeup artist from "So You Think You Can Dance?" nearly twice what the heads of your communications and foreign policy teams make? Really?

Katharine Mieszkowski: It's a great day when the political tempest in a teapot is that a woman is being paid too much.