Why Obama has to stay above 50 percent

A GOP operative argues that in a race between a white and black candidate, "undecideds" vote white. Meaning, "undecideds" will break for McCain. 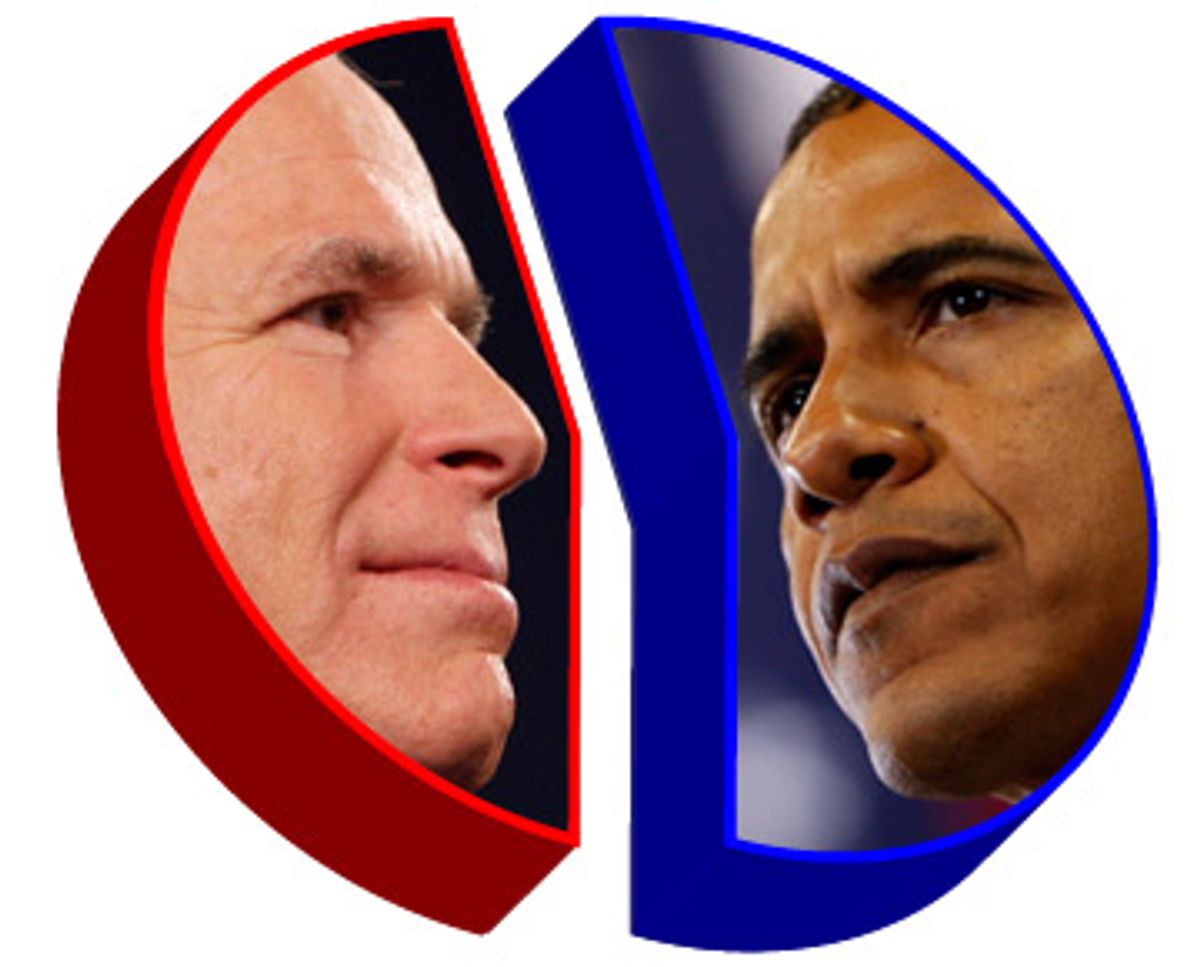 As his campaign manager has described it, John McCain is now looking at a "narrow-victory scenario." "The fact that we're in the race at all," added Steve Schmidt, "is a miracle. Because the environment is so bad and the head wind is so strong."

But talk of miracles and head winds aside, I think John McCain really does have a decent shot at winning, and that's not just because I'm a longtime Republican political operative. Despite what the polls seem to be saying, a closer look at the numbers shows that a Democratic victory is not a foregone conclusion. Why? Because if history is any guide, Barack Obama, as an African-American candidate for political office, needs to be polling consistently above 50 percent to win. And in crucial battleground states, he isn't.

Much has been written about the so-called Bradley Effect, in which voters lie to pollsters about whether they're willing to vote for a black candidate. The Bradley Effect is meant to explain why, for example, Doug Wilder had a healthy 9-point lead up to Election Day in the 1989 Virginia governor's race, and a similar lead in exit polling, only to squeak through to victory by one-half of 1 percent. But I'm not talking about voters telling pollsters they're going to support Candidate A when they're really going to vote for Candidate B. There are two other ways in which voters can mislead pollsters about their intentions. One is to decline to participate in a poll. (More than one expert has suggested that conservatives are more likely to decline than liberals, meaning there could be many uncounted McCain voters.) The other is when pollsters participate in a poll but withhold information. Specifically, they say they're undecided when they really aren't. It's the latter phenomenon in particular, I think, that gives John McCain a chance at winning enough swing states to reach the White House.

There's an old rule in politics that an incumbent candidate is always in danger when he dips under 50 percent, even if he is leading his opponent in the polls. It's all about the undecideds. In a race with an incumbent candidate and a challenger, on Election Day the undecideds tend to break for the challenger, at rates as high as 4 to 1. If an incumbent is polling at, say, 47 to 45 percent with 8 percent undecided, there's a good chance he's going to wind up losing 49 to 51. As it's sometimes expressed, if you're an incumbent, what you see is what you get.

The same pattern seems to be true for African-American candidates in much of the country. If you're a black candidate running against a white candidate, what you see is what you get. And it doesn't matter whether you're an incumbent or a challenger. If you're not polling above 50 percent, you should be worried. As of this writing, Barack Obama is not polling consistently above 50 percent in a number of electoral-vote-rich swing states, including Ohio and Florida. He should be worried.

I'm not going to revisit contests from decades past, like Harvey Gantt vs. Jesse Helms for a Senate seat in North Carolina, or even Tom Bradley vs. George Deukmejian for the governorship of California. Let's just look at the numbers from the final days of four races in four very different states in 2006. Voter behavior may have changed in the 18 years since black Democrat Gantt lost by 5 points despite being even in the polls, but I doubt it has changed as much in the past two years. Just to make it more interesting, none of these contests involved an incumbent trying to keep his job. All were battles for open seats. Two races involved black Republicans, two involved black Democrats.

Before we begin, I should say I'm not going to advance any theories for why voters do what they do, or why they may mislead pollsters. MIT professor Adam Berinsky thinks that some survey respondents, when asked racially charged questions, answer "I don't know" to conceal opinions they think are unpopular. Me, I'm only going to talk about math.

In Ohio in 2006, black Republican Ken Blackwell ran against white Democrat Ted Strickland for governor. On Nov. 6, the day before the election, Survey USA released a poll showing Strickland with 55 percent, Blackwell with 38 percent, two independents with a combined 3 percent and 4 percent undecided. On Election Day the actual results were Strickland 60.4 percent, Blackwell 36.8 percent and a combined 2.8 percent for the independents. For Blackwell, what he got was just a little less than what he saw.

In Maryland, black Republican Michael Steele and white Democrat Ben Cardin were vying for the Senate seat long held by Democrat Paul Sarbanes. During the week before balloting, the polls were fairly static. Steele wobbled between 43 and 47 percent in surveys from four different companies. Cardin's total ranged from 47 to 49 percent. Depending on methodology, undecideds accounted for 2 to 7 percent of the sample. The day before the election, a final poll from Survey USA put Cardin at 49 percent and Steele at 47. On Nov. 7, Cardin won with 54.2 percent of the vote. Steele got only 44.2. For Steele, like Blackwell, what he got was less than what he saw. Apparently, Cardin got virtually all the undecideds.

How about Tennessee, where black Democrat Harold Ford was up against white Republican Bob Corker for Republican Bill Frist's old U.S. Senate seat? Harold Ford did slightly better than Steele and Blackwell. The day before the election, he was within a point of Corker, 47 to 48 with 5 percent undecided, according to OnPoint Polling. On Nov. 7, Corker got 50.7 percent of the vote, Ford got 48 and an assortment of independents took 1.3 percent. Ford was able to pick up one out of every five undecided voters.

In deep blue Massachusetts, white Republican Kerry Healey lost badly to black Democrat Deval Patrick in the race to succeed Mitt Romney as governor. But Healey, who had been Romney's lieutenant governor, outperformed her polling. In the three weeks prior to the election Healey peaked at 31 percent in five polls that allowed respondents to choose "undecided." In those same five polls, Patrick averaged 53.4 percent. The number of undecideds ranged from 4 to 11 percent. On Election Day, Healey got 35.33 percent of the vote. Patrick got 55.64. Healey had added more than 4 points to her pre-election poll total, twice as big as Patrick's increase.

A skeptic could point out that Healey may have been drawing more heavily than Patrick from the relatively large pool of survey respondents who claimed they would be supporting an independent. But a Republican, like me, might point out that there does appear to be a pattern in these four races from just two years ago. And, in the case of Ohio, there was another poll with a different methodology and different results that seemed to confirm that pattern. The University of Cincinnati conducted a poll the day before the gubernatorial election that did not include undecideds. Respondents who initially answered "I don't know" were pushed to reveal which way they were leaning. All respondents were assigned to a candidate.

The results showed Strickland at 59 percent and Blackwell at 37 percent and the independents at 4 percent. That's exactly what each candidate got on Election Day. Now recall that the Survey USA poll of the same race, which did allow respondents to answer "undecided" and was conducted the very same day, showed Strickland's support at 55 percent. It suggests that on Nov. 6, 2006, all the "undecideds" in Ohio, 4 percent of the vote, were really supporters of the white candidate, Ted Strickland.

As you look at the polling data in the homestretch of this election, pay close attention whenever you see any numbers, be they statewide or national, where Sen. Obama is below 50 percent. So long as there are more than a handful of voters describing themselves as undecided, I will maintain that Sen. McCain is very much in the race. Even if Sen. Obama were to open a larger lead, my basis for analyzing things would remain the same. Are there enough undecided voters in crucial states to bridge whatever gap exists in the head-to-head? If so, don't be shocked if on Election Day, Sen. McCain is your winner.

Bill Greener is a founding partner of the political consultancy Greener and Hook. He served in both the Ford and Reagan administrations and as convention manager for the 1996 Republican National Convention. He also teaches at the George Washington University Graduate School of Political Management.