On Iraq, McCain doesn't have a clue

Despite the impasse in U.S.-Iraq negotiations, he clings to his fantasy of "victory" and America's ability to set the terms for withdrawal. 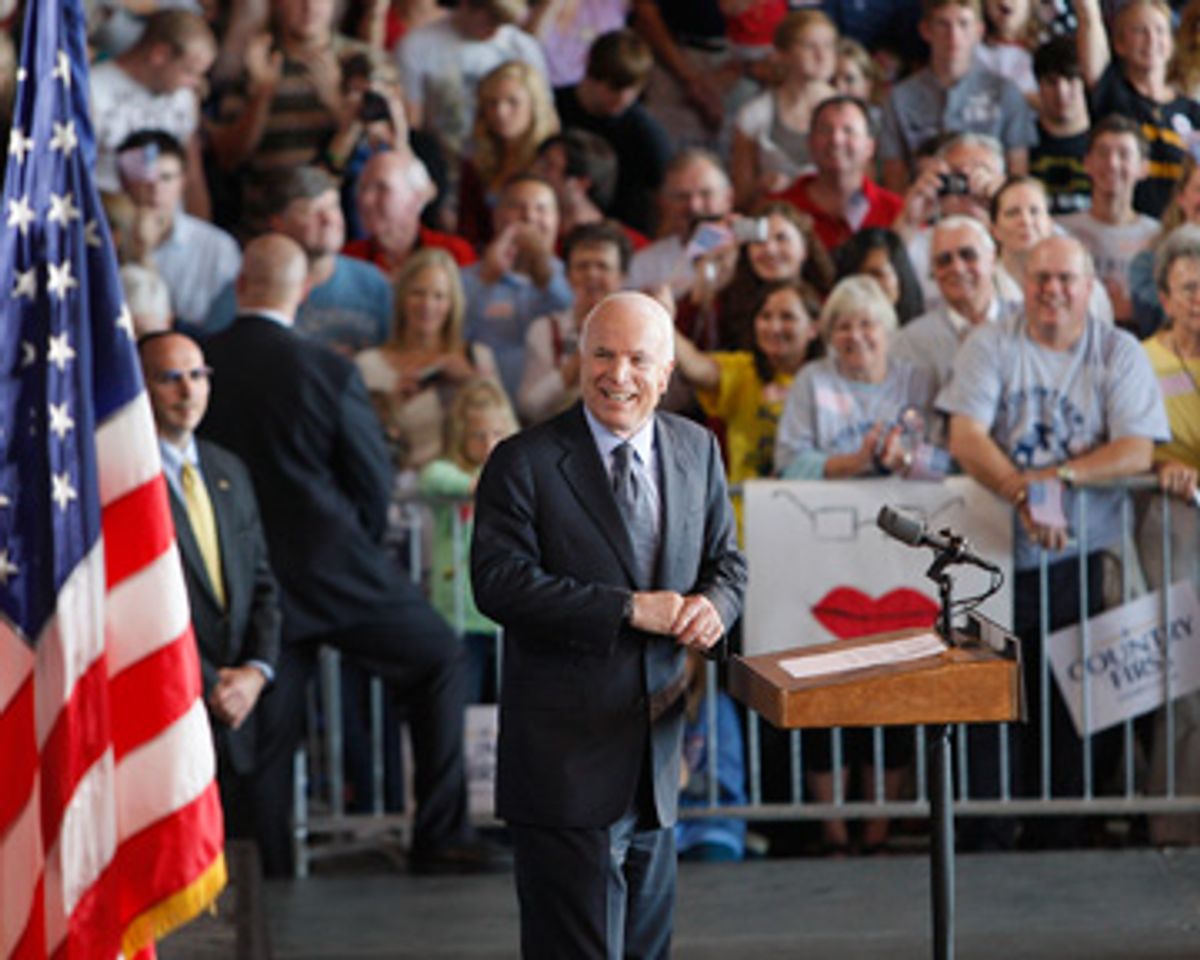 Declining violence in Iraq — though still punctuated by spectacular car bombings and the daily civilian death toll — has removed the war from front-page news during the presidential election campaign. The absence of headlines has allowed John McCain to pretend that his insistence on maintaining the American occupation until "victory" is still relevant.

But despite McCain's claim to greater experience and judgment in foreign policy, he just doesn't seem to know what he's talking about. If he did, the latest developments in relations between Baghdad and Washington would dampen the Republican nominee's enthusiasm for a prolonged occupation.

Negotiations between the Bush administration and the government of Nouri al-Maliki over the presence of U.S. forces have reached an impasse that no longer seems certain to be resolved until George W. Bush has left office. If any resolution is achieved over the coming weeks, moreover, it will render McCain's hard-line position on the war null and void.

For many months, American and Iraqi officials have been trying to reach consensus on a new status-of-forces agreement (SOFA). It is the same kind of bilateral treaty — essentially a contract — that governs the presence of U.S. troops in other nations around the world, and it covers everything from prosecuting violations of Iraqi law to establishing operational command and a deadline for withdrawal. It must be completed before Dec. 31, when the United Nations mandate covering the presence of foreign troops in Iraq will expire.

As Prime Minister Maliki revealed earlier this year, those negotiations have been marked by Iraqi determination that our troops should leave no later than 2011, on a timetable roughly similar to the withdrawal plan preferred by Barack Obama. But President Bush strongly objected to any hard deadline for the United States' departure. He preferred a deal that would allow American commanders to schedule the withdrawal according to conditions on the ground.

Even within Maliki's own governing coalition, however, growing resistance to any agreement that would allow American troops to stay beyond 2011 reflected the overwhelming feeling among Iraqi voters that the occupation must end. Maliki didn't agree with the Bush position, and neither did his Cabinet, let alone the Iraqi Parliament that must approve any SOFA by a two-thirds majority.

The result was that while McCain stumped the country this summer, berating Obama for his willingness to "surrender" in Iraq and promising to win "victory" and "honor" for America, the Bush negotiators quietly capitulated to the Iraqi demands. A final draft of the SOFA terms that has circulated recently sets Dec. 31, 2011, as the date for full withdrawal and includes withdrawal of U.S. troops from all cities and villages by next summer. Changing those terms would require a full renegotiation of the treaty and ratification by the Iraqi Parliament.

In other words, the White House abandoned its own long-held position and completely undercut McCain at the same time.

Yet from the Iraqi perspective, even the revised terms of the withdrawal have proved unacceptable. While the Kurds and some Sunnis who fear the aftermath of an American withdrawal approved of the SOFA terms, most Iraqi politicians and voters believe that three more years of occupation is too long and that other aspects of the deal disrespect Iraq's sovereignty. The unpopular presence of coalition troops is a critical issue in the upcoming provincial elections that will take place next January.

So now, the Iraqis are demanding that negotiations over the SOFA be reopened, much to the exasperation of the Bush administration and the Pentagon. Defense Secretary Robert Gates has warned of "pretty dramatic consequences" if the existing draft treaty is not ratified before the new year, although what he meant is unclear. "We basically stop doing anything," he said this week.

But having presented the Iraqis with a draft treaty last spring that would have permitted an indefinite occupation, the White House has folded so completely and so often during the course of the ensuing negotiations that such warnings have little credibility.

Meanwhile the Iraqis are obviously well aware that Bush has forfeited his influence at home and abroad and will be leaving office at the end of January anyway. Their latest proposal is to ask the United Nations to "extend" the coalition mandate for one more year, allowing the Iraqis to enter talks with the incoming administration.

So much for the fantasies of the neoconservatives, who once imagined the new Iraq as a permanent base for American troops in the Middle East, with a client government that would reflect U.S. priorities. What has come to exist instead is an Iraq much closer to Iran than to the United States, one that will countenance no permanent U.S. bases and prefers that our troops depart sooner rather than later.

Yet McCain still seems to believe that we will be able to have a "conditions-based" agreement with the Iraqis that allows the withdrawal of our troops according to the judgment of American commanders and the president. Someone should try to bring him back to reality, and soon — just in case he wins this election.