"Is McCain a competent fellow?"

When President Johnson asked that question about John McCain's father, Adm. Jack McCain, the answer he got was not flattering. But McCain got a promotion from LBJ anyway. 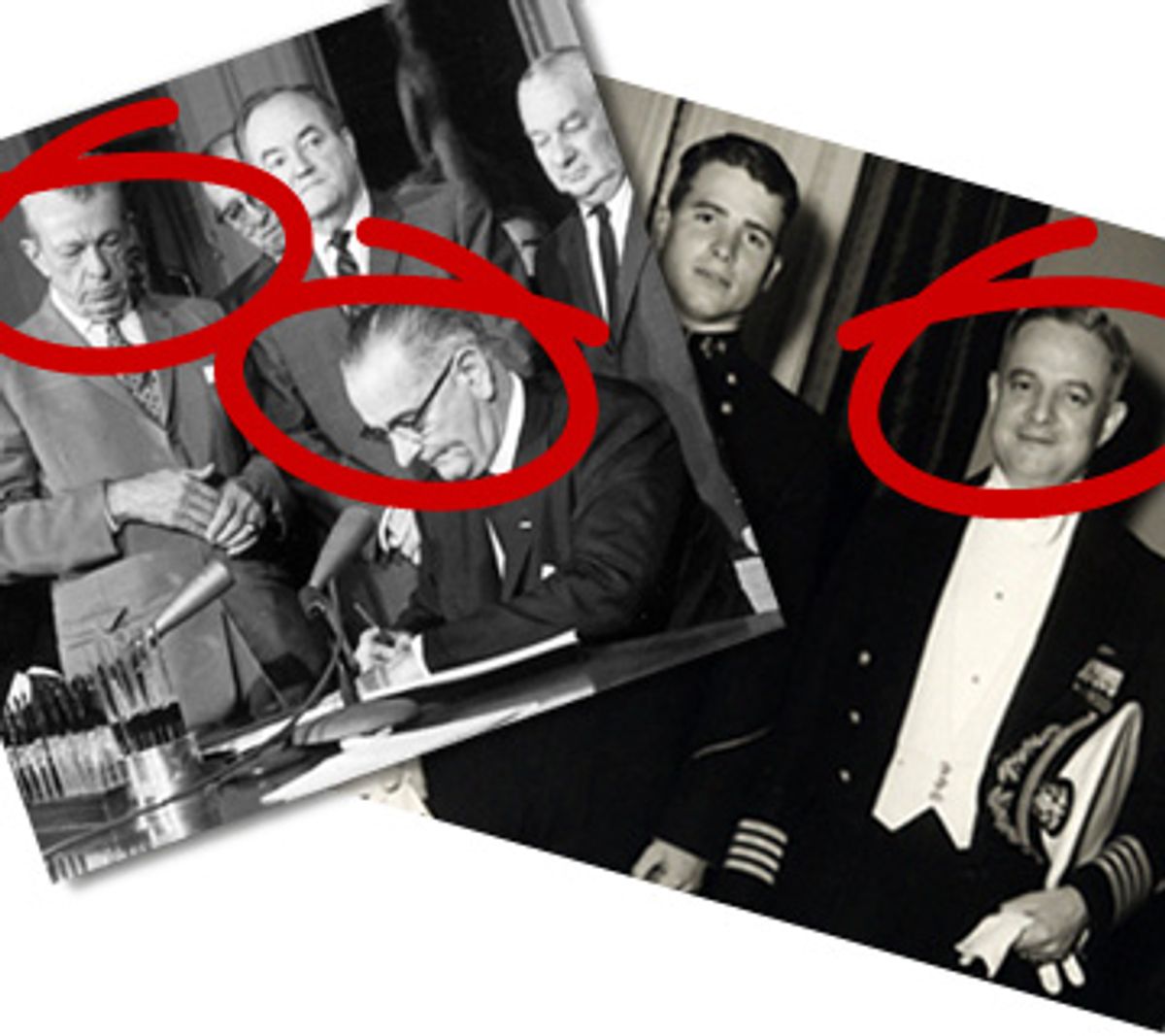 As the Republican nominee for president this year, John McCain is running as a maverick against Washington,  but he and his family have long been part of Washington's military-political culture and benefited professionally from their connections. And now a Salon investigation has revealed that a powerful senator prodded President Lyndon Johnson into promoting John McCain's father to a four-star admiral, despite the defense secretary's concern he wasn't competent for the job.

After years of badgering by Senate Minority Leader Everett Dirksen, R-Ill., Johnson in 1967 promoted Vice Adm. John S. "Jack" McCain Jr. from a dead-end post to commander of the Atlantic fleet, according to archived letters, documents and tapes of phone conversations that have not been reported until now. Johnson did it even though Defense Secretary Robert McNamara said in a 1966 phone conversation with Johnson that he had been told McCain wasn't competent and that "he's not a good strong tough commander."

McCain, his father and his grandfather learned the levers of power, made White House contacts and cultivated powerful, helpful allies among important members of Congress when each of them served in a mid-career posting as the Navy's liaison to Congress, according to documents and books. While all three McCains had celebrated military careers, Johnson's intervention in Jack McCain's case fits a pattern: Records show that presidents intervened to help McCain's grandfather, John S. "Slew" McCain; Jack McCain; and McCain himself.

After Adm. Slew McCain lost his command in 1945 when a court of inquiry found fault with his handling of a fleet during a typhoon that resulted in damage and deaths, President Harry Truman gave him a prestigious appointment in Washington.

And after John McCain III, the current presidential candidate, divorced his first wife in 1981 to marry his current wife and enter politics, President Ronald Reagan helped him out by giving his first wife a White House job.

Then there is LBJ's going to bat for McCain's father. The case of Jack McCain is well documented in letters, memos and two recorded telephone calls in the archives of the Dirksen Congressional Center in Pekin, Ill., and the LBJ Library in Austin, Texas.

In an era in which both political parties included liberals and conservatives, Johnson relied heavily on Dirksen to help him shepherd through his Great Society program during the 1960s. It was Dirksen who broke the filibuster of Southern conservatives to allow Congress to pass the historic Civil Rights Act of 1964, a debt that Johnson never forgot, as he made clear in notes, letters and phone calls to Dirksen.

John McCain and his biographers write that McCain's father developed powerful friends during his posting in Washington. "The political relationships my parents formed during this period contributed significantly to my father's future success," McCain wrote in his memoir, "Faith of My Fathers." But none of McCain's books or other biographies shed further light on those relationships.

Jack McCain, a decorated submarine commander during World War II, apparently made no secret about wanting to match his own father's achievement in becoming a four-star admiral, the top rank in the Navy.

In February 1966, Dirksen wrote a note teasing McCain, then a vice admiral, asking, "How come there are not four stars on your flag? Something must be done about that." And for two or three years, records show that Dirksen lobbied Johnson on McCain's behalf.

On April 7, 1966, Johnson aide Jack Valenti wrote a note to the president about a phone call from Dirksen: "He said he had mentioned some time ago his high recommendation of Adm. Jack McCain."

A few weeks later, on the morning of April 25, 1966, Dirksen talked to Johnson on a telephone call that Johnson recorded.

"Jack wanted that fourth star," Dirksen told Johnson, according to the little-heard tape recording. "Now I get some overtones that changes are in prospect over in Pentagon," Dirksen continued, "and the only way he'll get that fourth star is either to be CNO or vice CNO or commander of the United fleet or commander of the Pacific fleet." The CNO, or chief of naval operations, is the U.S. Navy's highest-ranking officer and reports directly to the secretary of the Navy.

Johnson promised to check into it. An internal White House memo says McCain had some champions in the Navy, but that the top Navy commanders had sidetracked his career, posting him as advisor to the U.S. representative to the United Nations, Arthur Goldberg. It was considered a dead-end posting that would strand McCain as a three-star admiral for the rest of his career.

The next morning, on April 26, 1966, Johnson called McNamara and said, "Dirksen's calling and he's all upset about McCain again. He wants him to be chief of naval operations." McNamara replied, "Oh boy, that's just impossible."

McNamara, however, did promise Johnson he would examine all four-star admiral positions and see if he could find one for McCain.

"Then go sit down with Dirksen and try to keep him aboard." McNamara replied, "I sure will."

In May 1967, Johnson promoted McCain to commander of the Atlantic Fleet (just five months before McCain's son John, a Navy pilot, was shot down and captured by the North Vietnamese in Hanoi). A year later, after Johnson had taken himself out of the running for reelection, he promoted McCain to commander in chief of the Pacific Fleet, which placed him over naval operations in Vietnam. McCain held that post until he retired in 1972.

In June 1967, after his promotion to four-star admiral, McCain wrote to his patron, Dirksen.

"I want to thank you for your trust and confidence in my professional ability," McCain wrote. "It is an assignment of great responsibility and I am most humble to have been chosen for this command."

Copies of the documents and a link to the taped phone calls were sent to the McCain campaign, but it did not respond to requests for comment. McNamara, reached at his home in Washington, said he's 93 now and does not recall the conversation with Johnson, Dirksen's lobbying or "having anything to do with McCain."

Tom Brune, a Washington correspondent for Newsday since 1999, has covered the presidential race for the past two years.