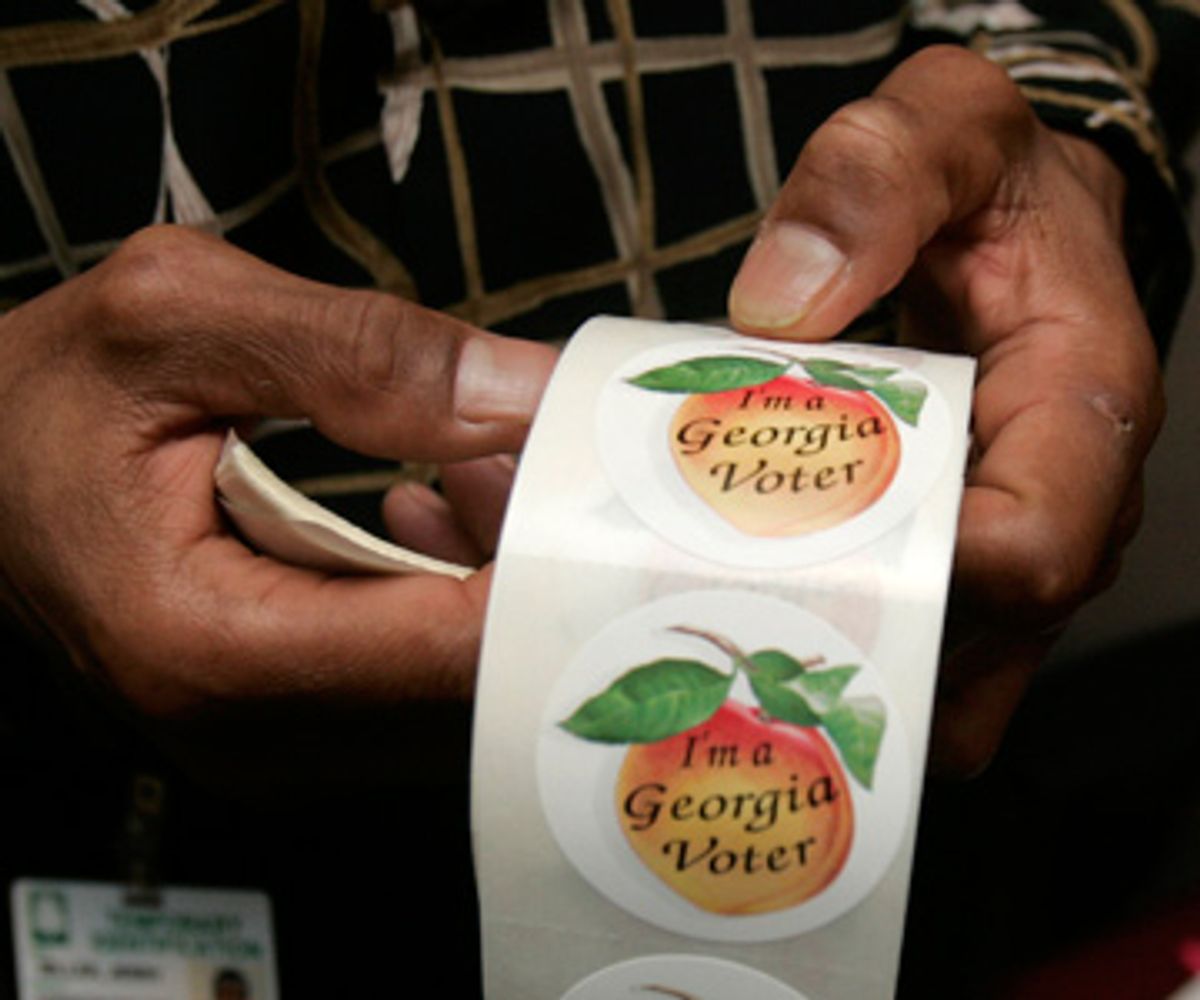 Forget soccer moms. Forget hockey moms. When it comes to this year's down-ballot races — Senate and House seats, state legislatures and beyond — the Democratic Party's most loyal voting bloc could determine the outcome. Assuming that early trends hold, a Democratic wave bigger than the one that swept Congress out of Republican hands in 2006 could be coming, and if it does, it will probably be powered by African-American voters.

The question is how much the African American vote will increase this year, and how that increase will be distributed. A fair number of vulnerable Republican candidates are in disproportionately black states and districts, and a substantial jump in black turnout — especially in the South — could mean that the Democrats could pick up a significant number of seats in those areas. Data from early voting suggests that this surge could already be happening, and that even some of the Republicans who were considered relatively safe despite being in competitive battles are seriously threatened.

By Salon's count, the black vote could swing as many as 17 House seats currently held by Republicans who are running in competitive elections. It could also play a role in three campaigns for Republican Senate seats and in one gubernatorial battle. With that in mind, the potential rise in African-American turnout could be devastating to Republican hopes.

"In the general election, I think you're looking at anywhere between a dozen to potentially 20 battleground House districts where the African-American vote is going to be key," Doug Thornell, the national press secretary for the Democratic Congressional Campaign Committee, says. "If our candidates can turn out a significant number of African-American voters in those districts, I think we're going to be in very good shape."

Thornell's count, which includes both Republican and Democratic districts, represents perhaps as much as a third of all the races the DCCC considers competitive.

It's no surprise, then, that Democrats have been working hard to ensure that African-Americans vote. Barack Obama's campaign has invested substantial amounts of money and energy in registering new voters in that demographic and in a get-out-the-vote operation focused on them. It's not just the Obama camp doing that, either; other arms of the party have been engaged in similar efforts, helped out by the Congressional Black Caucus.

That work appears to have borne fruit, at least judging by astounding early-voting numbers from states like Georgia, Louisiana and North Carolina. As of Oct. 29, and with two days still left in which to vote before Election Day itself, the number of people who'd voted in Georgia represented more than 40 percent of that total turnout from 2004. African-Americans have accounted for 35.2 percent of the early vote; they were 25 percent of the overall electorate in 2004 and make up 30 percent of the state's population. In Louisiana and North Carolina the numbers are not quite so striking, but they still bode well for Democrats.

"Normally we see Republicans using early voting at a much greater frequency than Democrats, and we see a much whiter electorate too. These numbers are a reverse on race and party identification," says George Mason University professor Michael McDonald, who's tracking early voting on his Web site. "Republicans are saying they're just picking low-hanging fruit, people who would've voted anyway. Well, yes, and no. In North Carolina, there are 100,000 voters who weren't even on the voter rolls, because North Carolina has one-stop registration." (In one-stop registration, voters can register and vote on the same day.)

David Bositis, a senior research associate specializing in black electoral politics at the Joint Center for Political and Economic Studies, says that judging from new registrations and figures from the Democratic primaries,  black turnout will be up 20 percent overall this year. Some places, he says, could see an even bigger increase. "In some of these states — like Virginia, for example — black turnout in the last presidential election was quite low ... there's going to be a big effort made to turn them out this time. In those places where turnout was low last time, I wouldn't be surprised if I saw a 25 and in some places even 30 percent increase."

In an interview, Bositis listed nine Republican House seats (including open seats vacated by a Republican) where he thinks African-Americans could give Democrats the win:

"I expect a majority of them probably are going to flip," Bositis said. "There clearly is a strong likelihood of a Democratic wave."

Republicans seem to agree. Of those nine seats, eight appear on the now-infamous "death list," a tally put together by GOP operatives evaluating competitive seats and the chance that they will flip. Only Rogers' seat was left off.

Another five districts that appear on the GOP death list feature a relatively high proportion of black voters. Those seats are:

House campaigns aren't the only ones that could be affected by an increase in the African-American turnout. The outcome of some pivotal gubernatorial elections in the South — not to mention the Democrats' chance to achieve a filibuster-proof majority in the U.S. Senate — might well hinge on the black vote.

In North Carolina, which the U.S. Census Bureau says is 21.7 percent black, there's a close race to replace outgoing Democratic Gov. Mike Easley, and Republican Sen. Elizabeth Dole's re-election campaign is in serious trouble. In Georgia, recent polls have typically shown incumbent Sen. Saxby Chambliss, a Republican, leading his Democratic challenger with a margin that's only in the low single digits. In both states, pollsters have been using a sample that assumes African-Americans will make up a decidedly smaller portion of the electorate than they have in early voting so far. And while Mississippi Republican Sen. Roger Wicker has a double-digit lead, his state is 37.2 percent African-American; a big surge in turnout could make him start to sweat.

The black vote could also knock off New England's last remaining Republican House member, Chris Shays. His district is only 11.15 percent black, but his margins of victory recently have been very close, and a swing of just a couple of points could make the difference. Michael Sachse, the communications director for Democratic challenger Jim Himes, sees a big surge in turnout overall — the number he provided Salon would represent more than a 15 percent increase over 2004. The Himes campaign is working especially hard on bringing out African-Americans.

"Democrats in all recent elections have always been talking about trying to find ways to increase black turnout in this district, and the focus of that has always been Bridgeport, which is the biggest city in the state, and has a significant African-American population. Obviously, one of our goals is to get a really good turnout in Bridgeport and in the African-American community in general," Sachse said.