Obama controls the vertical and the horizontal: From his 30-minute infomercial to his appearance on "The Daily Show," Obama took over the small screen on Wednesday to spread his message. 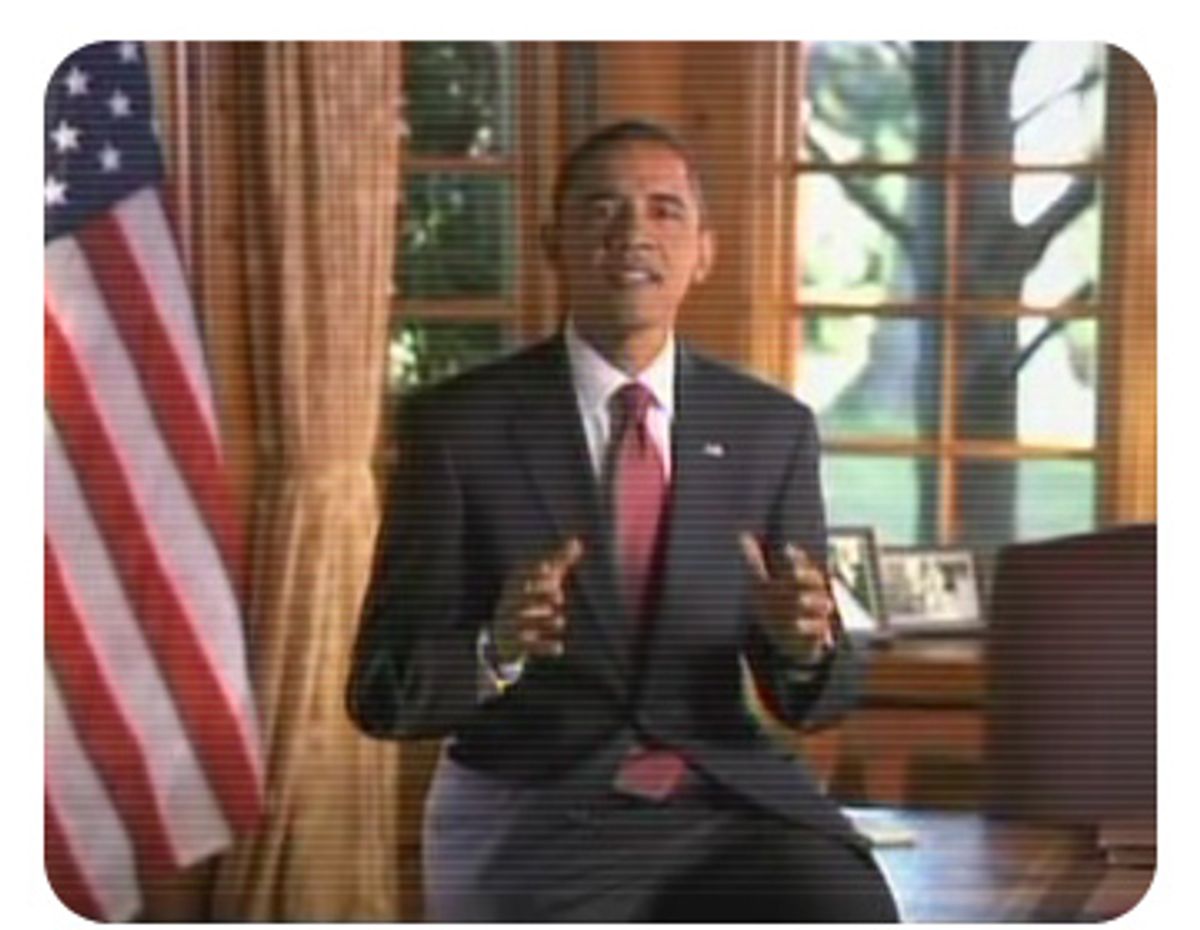 On Wednesday night, no matter what you were watching, you almost couldn't avoid seeing Barack Obama's face on your TV screen. First there was the coverage of his latest campaign stops in North Carolina and Florida on the local news, then an interview with Charles Gibson on ABC's "World News," then Obama's carefully produced 30-minute ad, which ran on CBS, NBC, MSNBC, Fox, BET, TV One and Univision at 8 p.m., followed by a taped appearance on "The Daily Show With Jon Stewart," and finally, a rally with former President Bill Clinton, timed to coincide with the 11 p.m. news on the East Coast. On top of it all, Obama launched a brand-new ad questioning the wisdom of John McCain's choice of Sarah Palin as his running mate.

Obama has already hit all of his talking points in every debate, and his face has appeared on our TV screens with clocklike regularity each night for weeks -- even in California, a blue state that's solidly in Obama's column. You would have to be hiding out in a cave somewhere not to be familiar with Obama's position on most issues. Even my 2-year-old has taken to shouting "Obama!" when she sees his face on our TV screen. (Last night, after we watched the news together, she added, "I want more Obama.")

So what could Barack Obama possibly accomplish with his very expensive 30-minute "infomercial" (as Sen. McCain had taken to calling it throughout the day), playing on so many networks at once? Isn't he likely to bore us, laying out all of the same old points to the camera in that professorial tone of his?

Or, as Jon Stewart put it in his taped interview with Obama on "The Daily Show," "Will it annoy us, or will we like it?"

After half-expecting to see Obama on a couch with Jessica Simpson and a bevy of skin-care products, the ad turned out to be a thoughtful, polished bit of television magic, a well-timed appeal to Americans desperate for some new direction during tough times.

We open on amber waves of grain, blowing in the wind, then widen to a big sky and an open prairie. Peaceful music. Waving hands. Smiling, inspired faces of average Americans.

Obama voice-over: "With each passing month, our country has faced increasingly difficult times. But everywhere I go, despite the economic crisis, the war and uncertainty about tomorrow, I still see optimism, and hope and strength." Hmm. I've been seeing more cynicism, doubt and panic, but do go on.

We cut to Obama in a very Oval-looking office. "We've been talking about the same problems for decades, and nothing is ever done to solve them." Well, Obama tells us, he's been traveling around the country, meeting Americans who've told him stories "that reflect the state of our union. I'd like to introduce you to some of those people tonight."

Cut to up-close and personal segments on the lives of Americans, just like those background pieces on "Oprah" but even more professionally produced. Here's Rebecca Johnston, a mother of six kids who's struggling to make ends meet. She lives in a nice house. Look at her kids, people! Her kids are adorable, just like yours. But with rising costs, it's getting tight. Amen to that, sister!

Obama voice-over: "All across the country, I've met families just like Rebecca's, getting their kids to school, meeting their mortgage payments, fighting for their families." Or just staring at their 401K statements, weeping inconsolably.

Obama, directly to the camera from his Ovalish office: "What happened in the financial markets was the final verdict on eight years of failed policies, and we're now going through the worst economic crisis since the Great Depression."

Next, we meet Larry Stewart and his wife, Juanita, an African-American family from Sardinia, Ohio (yes, a swing state). "We had our home paid for, so we just knew that retirement would be great." Uh-oh.

But then Juanita suffered from health problems including arthritis. "I take 12 different medications per day," Juanita tells us. "When Larry was working, all that was covered. When he retired, I did not have medical insurance, and each year it just got worse, worse, worse." To pay their bills, they had to take a loan on their house. Larry had to go back to work. Now he's 72 years old and he's working as a clerk at Wal-Mart. Lord help him!

But Obama gets it. Our troubles are his troubles. He feels our pain. He knows the importance of affordable healthcare and affordable, high-quality education.

"Barack is a problem solver who thinks big," Deval Patrick, governor of Massachusetts, tells the camera, then refers to Obama's "once-in-a-generation kind of leadership."

"This guy is special, because I think he can bring people together," adds Bill Richardson, governor of New Mexico.

After we meet some more struggling Americans, we cut to a live feed of Obama at a rally in Florida. The enormous crowd cheers loudly.

"In six days, we can choose hope over fear and unity over division, the promise of change over the power of the status quo," Obama shouts, sounding much more fired up and ready to roll into the White House than he has in months.

"America, the time for change has come!" (Rabid applause and cheering.)

Once again, it doesn't pay to underestimate this man. Instead of boring us to tears, Obama has managed to bring us to tears with a combination of heartstring-plucking stories, presidential poise and a good old-fashioned pep rally. And he doesn't even have to mention McCain or Palin, or even Bush, let alone attack them. The tone here is inspirational, after all: Americans are hurting, yes, but they're coming together to decide that the time for change has come.

At least the crowd at "The Daily Show" seems to agree. Obama is introduced to rousing applause, and Stewart has to remind everyone that Obama's not actually there, he's talking to Stewart from Sunrise, Fla.

This is the more professorial Obama --  but with a big smile on his face that says, "This is a comedy show! It's funny!" He's sporting his usual understated demeanor throughout the interview. On the 30-minute ad, which he himself mockingly calls an "infomercial": "You know, what I hope people will come away with is, I hope they'll say to themselves, you know what, this election is really important ... and I hope they'll have a better sense of what I want to do as president."

Stewart asks if Obama thinks McCain's attacks are working. "I think that there's a certain segment of hardcore Sean Hannity fans that probably wouldn't want to go have a beer with me," Obama says. "But I think for the average voter, they're saying to themselves, 'What's all this stuff about? I'm trying to think about hanging onto my house.'"

And what about this accusation that he's a socialist? "I said today that I think they found proof that when I was in kindergarten I shared my toys with some friends, and that's clearly a sign of subversive activity."

But the biggest audience reaction comes when Stewart brings up the Bradley effect, the notion that white voters will say they're going to vote for an African-American, but when they get in the voting booth, they won't do it. Obama responds, "I don't know, I don't think white voters have gotten this memo about the Bradley effect."

"Are you concerned that you may go into the voting booth and your white half will all of a sudden decide, 'I can't do this!'" asks Stewart.

Obama feigns trying to control his hand from voting for McCain. "I won't know what to do!" he says. "Yeah, it's a problem."

Meanwhile, McCain has already taken to mocking the "gauzy, feel-good" ad to crowds in Palm Beach, Fla., saying that it was "paid for by broken promises."

If so, Obama's first ad attacking Palin, which began airing on Wednesday, was paid for by the shortsightedness of McCain's campaign. Set to a hopeful, light guitar track, maybe designed to make the whole exercise seem a little less menacing, the ad begins with a McCain quote flashing on the screen: "I know a lot less about economics than I do about military or foreign policy issues." And next: "The issue of economics is not something I've understood as well as I should."

And finally, McCain is quoted as saying, "I might have to rely on a vice president that I select" for expertise on economic issues.

The words "His choice?" flash on the screen, then silently cut to video of Palin, smiling and winking at a crowd.

Finally, these words (in a font that should forever be referred to as "Obama"): "On November 4th, you get to make yours."

For all of the pundits decrying Obama launching an assault on Palin after months of restraint, this ad feels more like stating the obvious.

But will this enormous media blitzkrieg leave a bad taste in some Americans' mouths? After watching Democrats sitting on their hands for years now, carefully selecting their words, resisting the temptation to speak out, straining to sound polite, even in the closing moments of lost elections, Obama's huge last-minute push felt impressive and formidable. Not remotely content to rest on his laurels and watch the White House slip away again, the man is going into the homestretch with a huge, smart, polished political engine behind him. He's reaching out in every way he possibly can, and leaving no stone unturned.

As I was writing those words, a message popped up in my e-mail in box. It's from Barack Obama. Subject: "It's in your hands, Heather." Obama wants to know if I can make a donation of $250 or more as soon as possible, presumably so he can preempt the entire prime-time lineup on every network tomorrow night with a three-hour TV ad. What will he air this time? A variety show? A live fireside chat? A three-ring circus?

Unfortunately, I have a mortgage to pay. I think Obama will understand.