When the grim reaper takes time off, morticians reel and chaos ensues in Jose Saramago's funny, ravishing "Death With Interruptions." 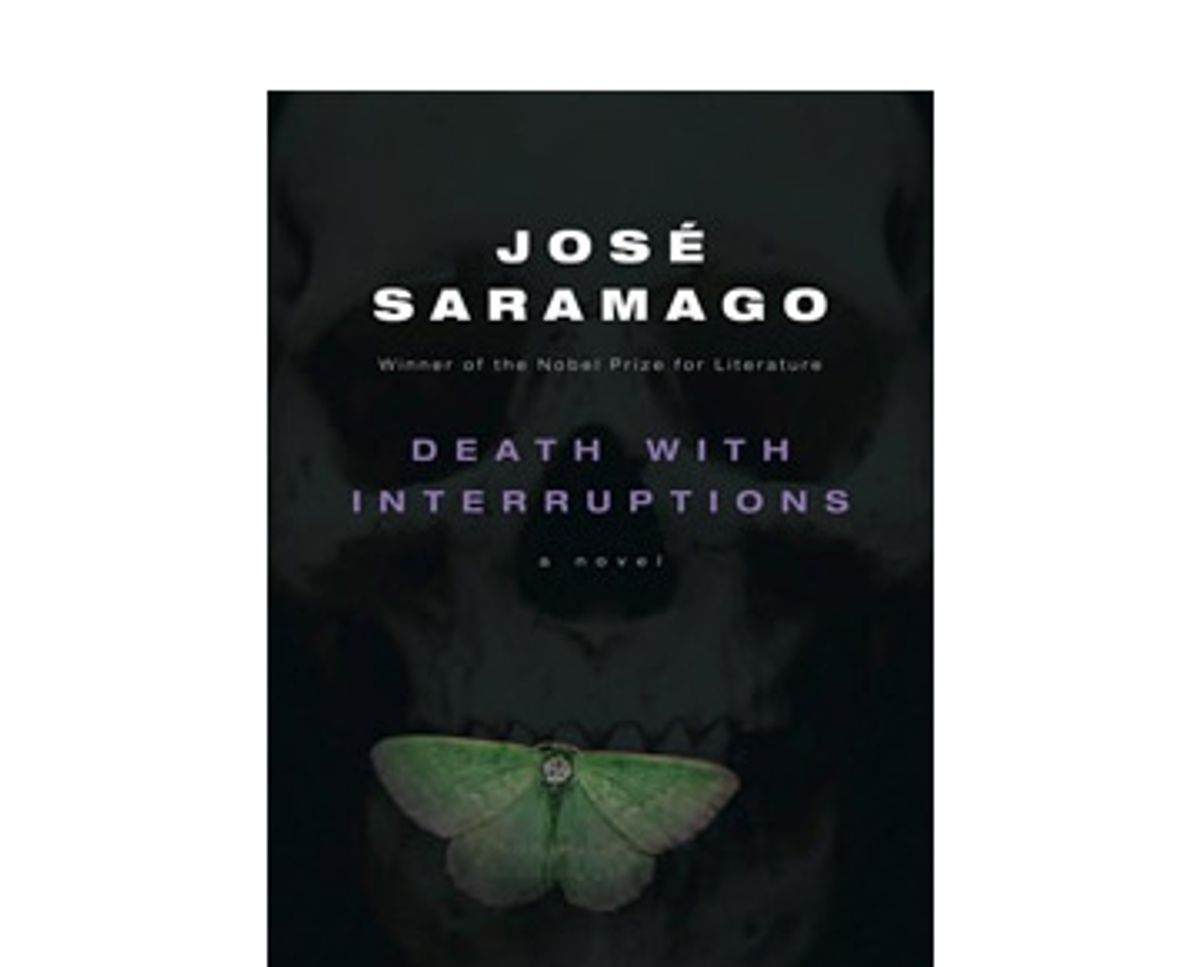 "Death Takes a Holiday" is a cinematic chestnut (based on a theatrical chestnut) that was remade into a Brad Pitt movie, "Meet Joe Black," in 1998. The premise is that Death decides to take a few days off in the form of a stilted but gentlemanly fellow, falling in love with a woman and -- as people are prone to do when caught up in a vacation romance -- deciding he doesn't really want to go back to his job. Despite the allegorical tinge of some of his novels, this material seems an unlikely choice for the Portuguese Nobel laureate Jose Saramago; it's dreamy and sentimental, rather than trenchant. Even unlikelier is the effectiveness of  "Death With Interruptions," a book that takes turns at being witty and ravishing before it embraces, at the last minute, the soft center of its conceit.

The first section of the book is the most original, told in the voice of an unknown and possibly plural narrator, describing the precipitous breakdown of the social order when Death decides to cease operations one year on New Year's Eve. This unexplained work stoppage takes place only among human beings and only within the borders of an unnamed, landlocked and predominantly Catholic constitutional monarchy. The result is what might be called an administrative satire, a droll, extended and highly enjoyable speculation on the chaos likely to follow on the realization of "humanity's greatest dream since the beginning of time." Emergency personnel, for example, are among the first to notice the downside, as even the most mangled bodies rescued from various fires and disasters refuse to expire.

Despite these drawbacks, an orgy of patriotism ensues, complete with the widespread and eventually obligatory display of the national flag. Then, "as one would expect, the first formal complaints came from the undertaking business." The morticians demand "non-recoverable loans that would help towards the rapid revitalization of a sector whose survival is now threatened for the first time in history." The life insurance industry reels as people cancel their policies en masse. Hospitals and nursing homes fill up with increasingly decrepit but nevertheless animate patients. The Catholic Church (which comes in for the most energetic scourging here) denounces the very suggestion of a revocation of death because without mortality, there can be no resurrection and "without resurrection there is no church." Fortunately, as the cardinal assures the prime minister, "We've done nothing but contradict reality from the outset, and yet we're still here."

In time, people discover that their aged and terminally ill relatives can be relieved of the burden of existence if they're transported across the border to a neighboring country. Such measures are publicly denounced, but covertly indulged, which leads to the rise of a lucrative human smuggling trade and the involvement of the mafia. Negotiations between the church, the government, the press, the monarchy and organized crime become ever more Byzantine, until the director of the state television ministry receives a mysterious letter on violet stationery announcing that Death -- or, rather, "death," since she signs her name in the lower case -- has decided to abandon her little experiment. From now on, however, everyone destined to die will receive advance notice, on violet stationery and via the postal service, so that they can put their affairs in order.

In one of the novel's funniest passages, a newspaper commissions the "authorized opinion" of a "grammarian" on death's missive, and publishes a predictable denunciation of the writer's "chaotic syntax, the absence of full stops, the complete lack of very necessary parentheses, the obsessive elimination of paragraphs, the random use of commas and, most unforgivable sin of all, the intentional and almost diabolical abolition of the capital letter" (much of which describes the actual style of "Death With Interruptions"). "If death," fulminates the grammarian, "who has had the priceless privilege of seeing the great literary geniuses of the past, writes like this, what of our children if they choose to imitate such a philological monstrosity." (This diatribe prompts possibly the scariest cease and desist letter in the history of journalism.)

In the last part of the book, we finally meet death herself, an undersupervised and titanically bored drone, stuck in a windowless office with a scythe that refuses to talk to her and a mountain of paperwork. She broods over her suspicions that "sectorial deaths" like herself "do the real work of removing any excrescences" but will probably be deprived of the credit when the inevitable end of the universe comes. Then, as she sits, addressing and sending off violet envelopes and "drumming on the desk with the bones of her fingers, or the fingers of her bones," one letter comes back.

The rest of "Death With Interruptions" relates what happens when death decides to follow up on this glitch, and it is more conventional and less hilarious than the first part of the novel. Nevertheless, it includes many genuinely lovely passages, including some unexpected ruminations on the nature of human-canine affection. The narration continues to slide gracefully between the chatty and the profound (well executed in Margaret Jull Costa's translation) until it tumbles to a creditable ending. Perhaps the closing paragraphs are a shade too comforting, but they do hit the spot, whether or not they ring entirely true. And besides, as the narrator(s) assure the reader at a crucial point, they can't be taken too seriously: "The many things that have been said about god and about death are nothing but stories, and this is just another one."