Ignore the GOP blame game: The only one responsible for John McCain's Palin problems is McCain. 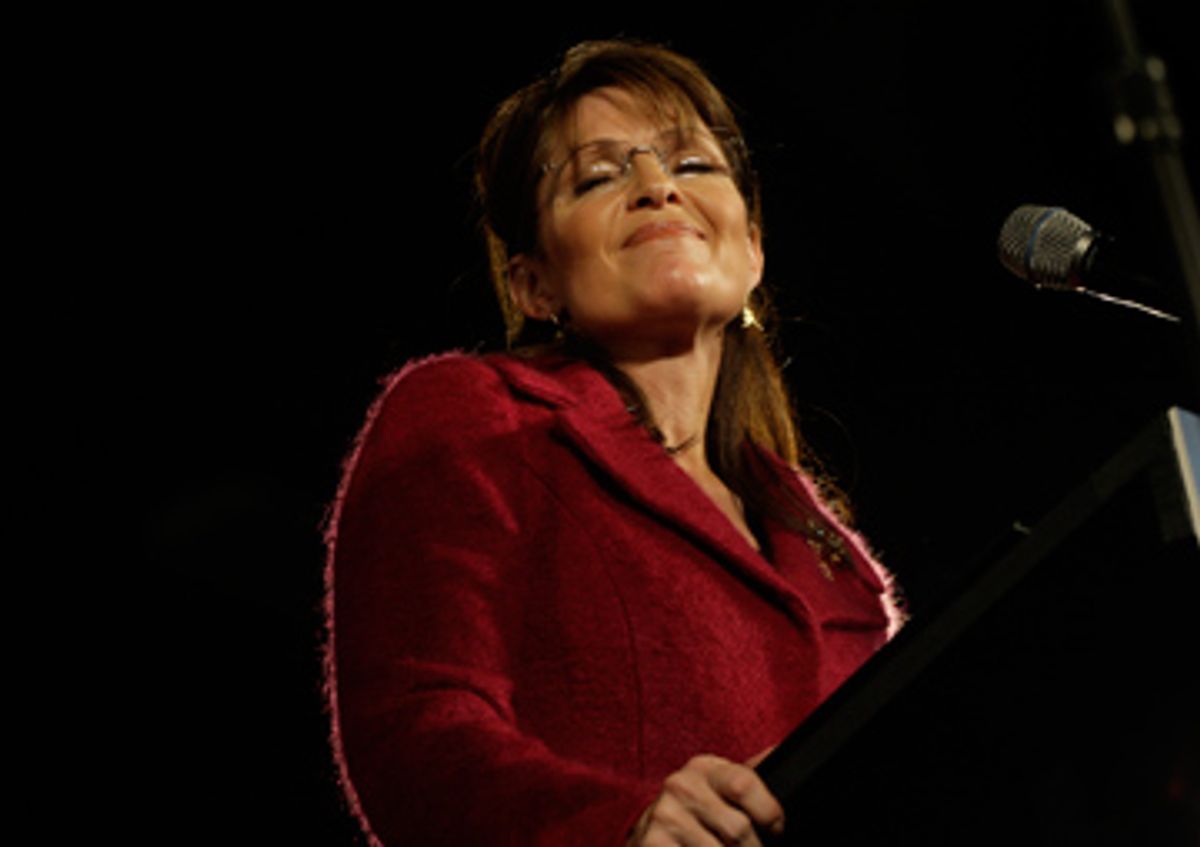 Gov. Sarah Palin at a rally at Shippensburg University in Shippensburg, Pa., Oct. 28, 2008.

The GOP circular firing squad kept blasting away on Tuesday, over the question of who's to blame for the cavalcade of bad Sarah Palin news. Come on, you know you're paying attention. It's a grotesque pileup on the political highway, and it's impossible to look away.

To recap: Palin went "rogue," and blamed the Republican National Committee for buying her $150,000 in clothing. McCain advisors then unloaded on their veepzilla, calling her a disastrously underinformed "diva" -- anonymously, of course. Palin supporters shot back, blaming the McCain camp for its poor handling of the talented Alaska political phenom. A "top McCain advisor" retaliated by calling Palin a "whack job" in the Politico. The RNC, meanwhile, kind of unbelievably, publicly blamed the McCain campaign for the clothing scandal. Ouch.

If you think all that's super-petty high school stuff, well, it gets worse. (I feel like I'm back to recapping episodes of "America's Next Top Model," but I love it.) Palin-lover Fred Barnes, of Fox and the Weekly Standard, came out and, without apparent evidence, named Nicolle Wallace as the John McCain aide who personally put the $150,000 in clothing on her credit card. Wallace struck back, telling Ana Marie Cox: "There's obviously an organized campaign to lay blame for things at my feet and I'm not going to engage before the campaign ends. I have a very long relationship with Fox News and the notion that someone would call me a coward on the air and accuse me of putting $150,000 on my credit card without a single person calling and checking with me suggests that something is going on."

Barnes and his buddy Bill Kristol are now, of course, completely, like, pissed, and they're spreading the skeeziest rumors about Wallace in between classes, and insisting nobody sit at her lunch table after Nov. 4.

When I posted about this late Monday night, I said all the Palin scapegoating was making me feel a little sorry for her. A little. The next morning, I assigned Tom Schaller to debate me, and frankly, he won. It's hard to defend Palin in this mess. But then I saw Joe Conason denounce the McCain campaign as sexist in the New York Observer, and I couldn't help coming back to the issue of whether Palin was being treated unfairly one last time.

The fact is, both of the following observations are true:

A) Palin is a nasty and very skilled political opportunist who is giving as good as she's getting, smacking Barack Obama, Joe Biden and now McCain (his staff, anyway) with savage glee. and

B) She's being scapegoated in a personal way that seems sadly familiar for female candidates, in very sexist terms:  First "diva," then "whack job;" next she'll be Glenn Close in "Fatal Attraction." Oops, sorry, that was Hillary Clinton.

We need to be able to hold such seeming contradictions in our minds, as we watch Republicans unravel. I vehemently disagree with fringe feminists like former Ms. Editor Elaine Lafferty, who use both Palin's gender and Clinton's defeat as a reason to back the anti-feminist McCain. Let's be clear: They're a tiny, eccentric minority of feminists. The fact is, Sarah Palin's pick made Hillary supporters who were still-grieving, lukewarm Obama backers into ardent Obama lovers, and sent most of those who, inexplicably, stayed on the fence when Clinton asked them to back Obama back to the Democratic Party where they belong. Palin has been an enormous boon to the Obama-Biden ticket, helping Democrats cement their standing especially with independent women. Lafferty is in a category of, if not one, very very few alleged feminists who use Palin as an excuse to support McCain.

Still, it's hard not to notice that a woman is being blamed and shamed yet again, when the real screw-up here is McCain himself, who presided over possibly the worst V.P. pick in modern history. (See "The Vet Who Did Not Vet" for more.) McCain's defenders had the bad luck to voice their doubts about Palin the same weekend Robert Draper published his awesome piece about the McCain campaign's messes, including her slapdash selection, in the New York Times magazine. Draper continued his story on his GQ blog Tuesday, where he revealed the McCain camp's dilemma: whether to send Palin out on the campaign trail as a "scripted robot or unscripted ignoramus." Draper also reported that campaign tensions are so high, McCain recently snubbed Palin on his campaign bus. McCain: such a … diva!

So: No pity for Sarah Palin. But much shame for John McCain, who picked her, and who is now letting his team tear her apart. McCain, who loves to gamble, made a big-risk, high-stakes bet, and lost, and now he doesn't want to pay up. It's bad behavior for McCain, but it's good news for Barack Obama: In the final week of a tough campaign his opponent's people are saving some of their sharpest knives for one another.