The Church of Latter-day Saints has pumped millions into Proposition 8 to ban gay marriage. But for one devout family, the politics are personal. 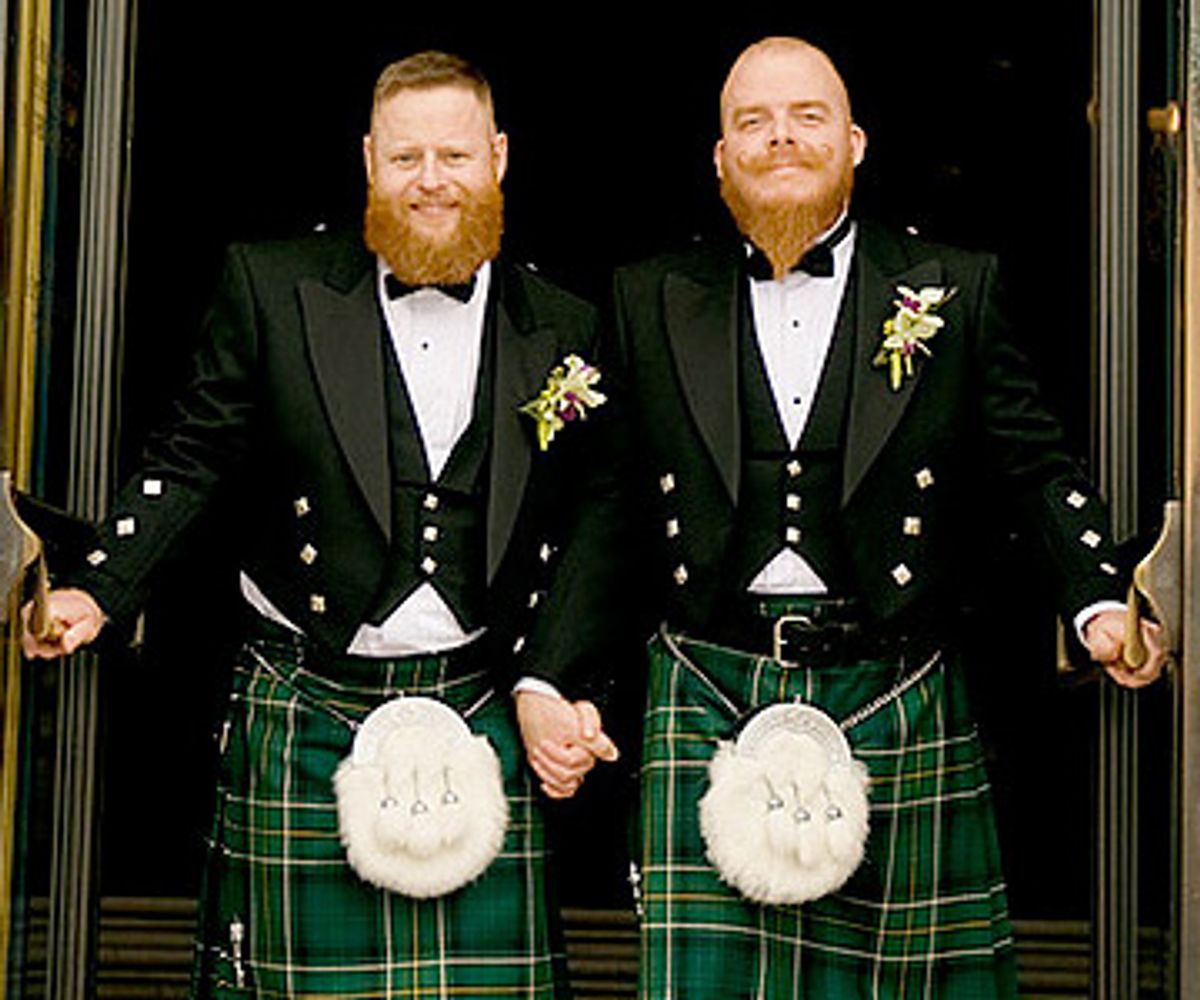 "Love each other, be selfless, negotiate," George E. Redd III said to his son Jay on his wedding day recently. Gazing at his 36-year-old son standing next to his beloved, in the Swedenborgian Church in San Francisco, Redd III quoted Paul, Ringo, John and George: "All you need is love, love is all you need."

It was hanky time inside the chapel, a cozy wooden Arts and Crafts building that could have been airlifted in from a village in Scandinavia, or perhaps the Shire. There's nothing like the father blessing the son at a wedding, with Irish folk musicians strumming in the background, to get the tear ducts flowing. Especially when the son's gorgeous spouse is another man.

A few weeks after the wedding, Jay, a movie director based in Los Angeles and San Francisco, told me that his father's Beatles reference had taken him totally by surprise. "When Dad said, 'And to quote the great Western philosophers,' I thought for sure he was going to read from Scripture," Jay said. But to his great relief, the advice his father doled out came from John Lennon and not John the Baptist. After all the pain Jay had endured, wondering whether his devout Mormon father would even attend his wedding, those Liverpool lyrics were music to his ears.

While same-sex weddings are daily events in California these days, especially since the California Supreme Court legalized gay marriage earlier this year, it's easy to overlook the fact that it's still a strained personal issue inside many families. With Proposition 8 on the ballot this Tuesday, which would amend the California Constitution to ban gay marriage (effectively overriding the recent Supreme Court ruling), the strain has taken on a renewed political intensity.

The Yes on 8 campaign has become a national conservative cause, with churches from around the country, led by the Church of Jesus Christ of Latter-day Saints, pumping millions into the Golden State in support of the measure. If it passes, Proposition 8 would throw Jay's marriage, as well those of the approximately 12,000 other same-sex couples who have married in the state since June, into legal limbo. As of Thursday night, polls showed the measure to be in a statistical dead heat.

But the story of Jay and George Redd shows that blood is often thicker than holy water. And as much as the Mormon church, or any church hierarchy, seeks to dictate how people live their lives, the heart won't be so easily chained.

For Jay, the right thing to do this year was marry the love of his life, Brian Dietrich. Jay met Brian, a 41-year-old psychotherapist, last year, and they immediately knew they wanted to commit to each other for the long haul. When Jay called his parents to invite them to their wedding, the line between Salt Lake City and San Francisco seemed to fizzle out. "Dear, that's nice, very nice," his mother, Marsha, said lukewarmly. "I'm not sure how your father's going to deal with this," she added. "I don't think your dad is going to come." Jay wasn't surprised exactly. But it still hurt.

When he spoke with his father directly, Jay's heart sank. "He didn't say, 'We're happy for you,'" Jay said. "Not, 'congratulations.' It wasn't passive-aggressive. It was just, 'Well, OK.'"

Jay was ripped up inside. "I respect and understand my father's position because I grew up in it," he told me. "I wanted to give him the benefit of the doubt for how far he's come all these years." But he was also angry and frustrated. His father had celebrated the marriages of his sister and brother, and he longed for the same paternal blessing.

He left an urgent message on his father's voice mail: "Dad, you always told me you just want me to be happy. This makes me happy to be marrying Brian. I'm asking you to be there to support us in our happiness."

The days were ticking away to the wedding on Oct. 5; his father still hadn't returned his call.

"I was anticipating that something like this might occur, just knowing what the times are and how things are moving," Jay's father, George E. Redd, told me when I reached him by phone at his home in Salt Lake City. George, a 62-year-old banker, who is active in the Mormon church, was a bishop when Jay was growing up. He kindly answered my question about how he might have felt a year ago if someone had told him he would be celebrating his son's marriage to another man. "I said, Well, I hope that doesn't happen, but if it does, I'm not sure how I would feel about it and react to it. Probably not very positively at the time."

When George got the call from Jay asking them to attend his wedding, he plunged into reflection, talking with his wife, praying, reading biblical and Latter-day Saints scriptures. Love for Jay was never a question, and they had met Brian "and thought he was a wonderful man as well." But the marriage was a conflict for him because of his Mormon beliefs. He was reticent to express it, but in an interview overflowing with positive words about his son, he admitted, "My ideal situation would be my son marrying a woman. That's what I believe the family unit is, the marriage of a man and a woman."

George and Marsha raised their kids inside the Mormon church in Utah in the 1970s. Jay remembers that there were four temples within about a mile of his house. As a young man, he served as a deacon and belonged to a young Mormon men's group where he learned that masturbation is an "abomination" that leads to being gay. According to the teachings, "It's a sin next to murder to be gay, which was really hard to hear," Jay said. When he came out to his father at age 23, "ironically, in a church parking lot," Jay felt so guilty that he agreed to go into reparative therapy to overcome his "same-sex attraction disorder." But he moved on quickly and grew to embrace his life as a gay man. Now the Mormon church acknowledges homosexuality, but says gays and lesbians must remain celibate.

After much contemplation about what to do about his son Jay's marriage, George realized that "the most important thing is to love and support our son in the decision he's made." He and the family would drive from Utah to San Francisco for Jay and Brian's wedding.

Jay recalls hearing the phone ring at 4 o'clock one morning. When he listened to the message later, it was his father. "I've been praying about this. I love you. You're my son. I want you to be happy, and if this marriage to Brian makes you happy, then I'm happy."

Later, he asked his mother what she had said to him to influence his decision. "I didn't say much," she said. "I only asked him one question -- what do you think Jesus would do in this situation?"

Mormons have poured over $11 million into supporting Proposition 8, or 40 percent of the total raised so far. When I asked George how he felt about the proposed constitutional ban on same-sex marriage, which would put the legal status of his own son's union in jeopardy, he didn't want to go there. "This discussion has been based on feelings of love, of concern for the happiness of my son and I'd just leave the politics out of it," he said gently.

"I'm not surprised at all," Jay said when I told him what his dad had said about Proposition 8. For all his life, George has "left politics out of it." But "based on his actions and his words at our ceremony," Jay believes in his heart that he supports equality for all.

When Jay's father agreed not only to attend the wedding, but to speak, Jay had "this weird Darth Vader moment," he told me, laughing. "No, he's not Darth Vader! But the analogy here is this spark of amazing grace in him."

Many of us at Jay and Brian's wedding were indeed deeply moved by George Redd that day. A man of medium stature, with close-cropped fine gray hair and glasses, he spoke eloquently and lovingly to his son and new son-in-law. We only had a small inkling of the journey he'd been on to reach that moment of accepting and blessing his son's union with Brian, but we knew he was reaching out across a cultural and religious abyss to do so. "Jay, who has blue eyes, red hair and a red beard, told me he met someone who makes him incredibly happy," he said, looking over at the grooms, who were seated nearby, fingers entwined. "And that man," he said looking at Brian and smiling, "has blue eyes, red hair and a red beard ..." It was hanky time again.

Jay does not feel the same kind of grace from the Church of Latter-day Saints, however. Regarding its aggressive campaigning for Proposition 8, he is sad and angry. "I feel cast out for who I am," he says bluntly. "Though I no longer identify as a practicing Mormon, it still burns. This is a church that has been persecuted for its flavor of Christianity, for its past marriage practices, for its past religious practices. And here they are turning around and persecuting another group of people. I feel like it's very shortsighted and it's not a very Christian way of treating people."

In the end, Jay's dad even helped them finance the wedding. Jay was worried about "how far to push the envelope with him." His ex, David, even told him, "It's good enough that they're coming out. Don't push it too far." But ask, and you shall receive.

"I feel like they really sacrificed," Jay said. "My father's not a big fan of freeways and big cities, but they drove for two days from Utah to come to our ceremony. They really went the extra mile."