The U.S. economy has prospered under Democratic policies, and the candidate knows it. But the real battle begins once Obama takes the White House. 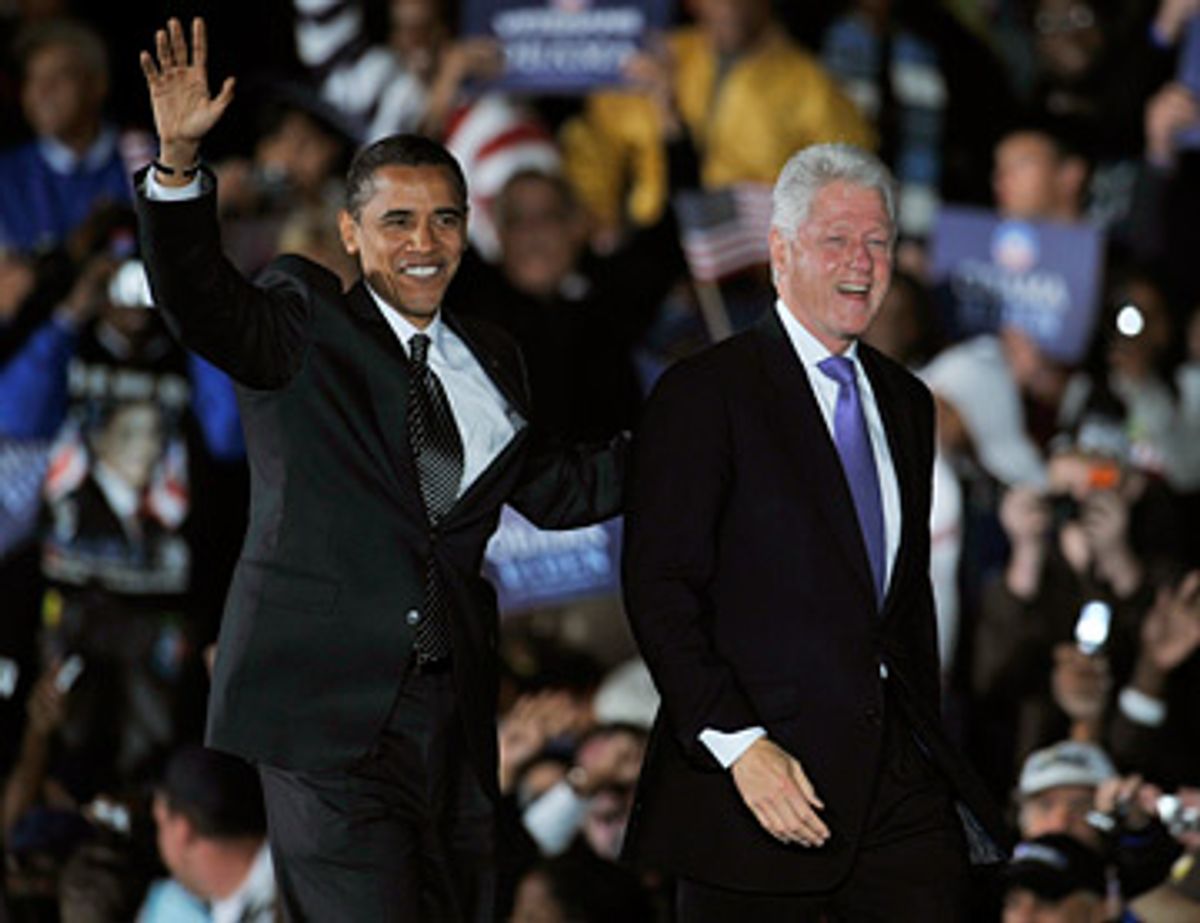 As Barack Obama delivers his closing argument, stumping across the battleground states, he seems increasingly confident in contrasting the success of Democratic policy with the failure of Republican ideology. During his Florida appearance with former President Bill Clinton as well as in other recent speeches, he has pointed to the bankruptcy of the conservative economic theories that he promises to discard. And he is utterly unfazed by the McCain camp's shrill cries of "socialism," perhaps because he knows the old red-baiting rhetoric has lost much of its power to bamboozle.

If Obama wins this election by a substantial margin -- the bigger the better -- then perhaps his presidency will mark the advent of a new progressive era in America. But the ideologues of the right won't simply disappear because their dogma is discredited. They will tell us, as McCain has repeatedly warned in his speeches, that "spreading the money around" is a bad idea that has been tried, as he put it, by the "far-left liberals." They will whine and moan about "tax and spend" and offer predictions of doom at every percentage increase in marginal rates on the very rich.

Unless Americans understand how the economy has worked -- and how this country was built in the past century -- it is entirely possible that those false prophets will once again block changes that the nation has needed for decades. That understanding should include a review of some very recent history, too.

When Bill Clinton and Al Gore entered the White House with a program for economic, social and environmental renewal, after the era of stagnation under Reagan and Bush, their plans were swiftly thwarted. A pitched battle over taxes and healthcare led to the historic Republican victory in the 1994 congressional midterm election. Clinton certainly was responsible for some of those failures -- and he eventually accomplished much nonetheless -- but universal healthcare, worldwide controls of carbon emissions, and many other profoundly important reforms were killed.

Is Obama destined to relive those experiences when he asks Congress to raise taxes on the wealthy and pass a huge economic stimulus bill? Perhaps not, but those are precisely the issues that led toward Clinton's confrontation with the Republicans and his party's historic defeat two years later. The Republicans refused to support his tax package, even though he cut spending to satisfy conservatives, and then persuaded gullible middle-class voters that he had inflicted the "largest tax increase in history" on them, which was untrue. ("We are buying a one-way ticket to a recession," whined Phil Gramm, the Republican senator from Texas who later became a top economic advisor to McCain -- and whose legislative gutting of financial regulation created the conditions that led to the current recession.)

Will anyone besides the pundits remember what happened then and why it is still relevant now? Not unless Obama himself educates the public -- as he alone now seems able to do. The country is undergoing a teachable moment that is certain to last for many painful months -- and if the new president doesn't seize that opportunity, then his adversaries surely will.

What Obama needs to explain, over and over again, is that Democratic economic programs have succeeded in promoting growth precisely because they distribute national wealth more widely than the Republican tradition of trickle-down. The numbers have told the story for decades -- and the statistics detailing the Clinton administration's success and the Bush administration's failure have only reinforced the narrative.

Consider the cumulative performance of the stock market. Until this year, the best data available showed that on average, equities increased in value by more than 12 percent during Democratic administrations, and by around 8 percent when Republicans were in power. The largest gains in the past 80 years occurred under FDR, Truman, Johnson and Clinton -- and when the awful declines of the past few months are factored in, the Democratic record will look even better.

Of course, stock prices alone provide an imperfect measure of national progress, especially from a liberal perspective. So Obama should point to similar statistics proving the superiority of the Democratic record on gross domestic product, job creation, unemployment, poverty, budget discipline, disposable income and inflation. His purpose should not be to score partisan points but to prepare the public for the struggle over spending and taxes that will mark his first two years.

For the moment, scaring voters is no longer so easy. The Republican administration is nationalizing financial institutions and Republican economists are demanding big federal spending initiatives. But if Obama wants to avoid the defeats of Clinton's first two years, he must consistently remind Americans what has succeeded and who has failed -- and why.