Is Barack Obama a socialist?

If he is, then so is John McCain. But the charge is just a racial dog whistle anyway. Can you say "welfare queen"? 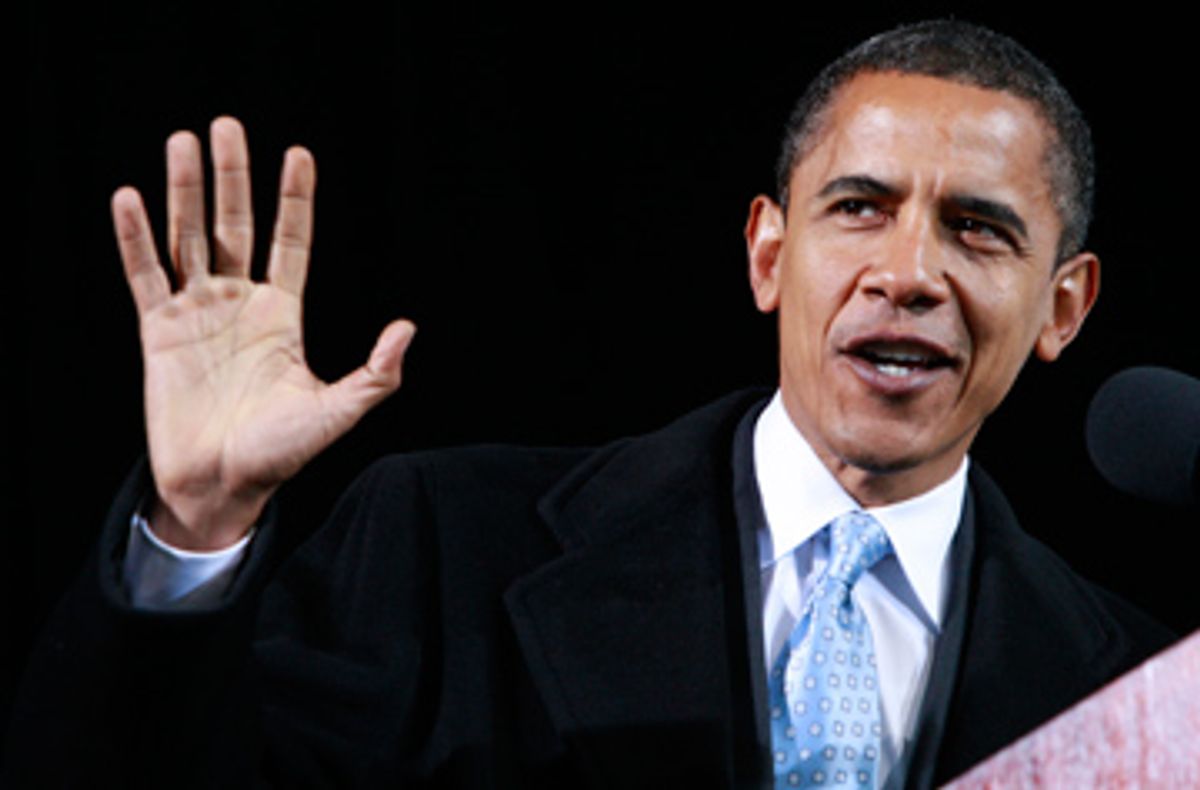 John McCain, struggling to catch up with Barack Obama in the last days of the campaign, has finally found a theme for a campaign that until now has lacked one. He is running for the White House to defend capitalism against socialism. Because Barack Obama in an unguarded moment to Joe the Plumber said he wanted to "spread the wealth," McCain and Palin are painting the senator from Illinois as a "redistributionist" or "redistributor" (they can't decide on the appropriate term), a subversive and sinister figure who is peddling "socialism." It's not enough for McCain to run against Obama as though he were George McGovern. McCain is trying to equate Obama with Eugene Debs and Norman Thomas, the socialist candidates for the presidency of yesteryear. Never mind that Jonah Goldberg has spent a couple of years denouncing liberal fascism. Fascists last week, progressives like Obama are now socialists. Which is to say, "commies."

McCain's desperate use of the socialist smear is particularly shameless, given the dubiousness of his own conservative credentials. The left's chant of "McSame" to the contrary, McCain and Rudy Giuliani were the (relative) moderates among the 2008 Republican contenders. Most conservatives in the GOP primaries voted against McCain, who won the nomination only because of the support of moderate Republicans and independents and the mutual annihilation of the real conservatives -- Romney, the business right's candidate, and Huckabee, the religious right's candidate. The radical right can be counted on to know its own. On March 12, 2007, the Club for Growth wrote of McCain, "his overall record is tainted by a naked antipathy towards the free market and individual freedom." Like George Herbert Walker Bush in 1988 and 1992, McCain, the rich and establishmentarian son and grandson of admirals, has had to overcome the suspicion of the Republican base. This dynamic explains the decisions of his campaign, from his choice of right-wing heroine Sarah Palin as his running mate to his charges that Obama is a socialist and redistributionist.

In a country in which substantial numbers believe that space aliens crashed at Roswell, it would be foolish for Obama supporters to let the socialist charge go unanswered. Fortunately, conservative and libertarian heroes like Friedrich von Hayek, Milton Friedman, Ronald Reagan and John McCain himself can be called by the Obama team as witnesses for the defense.

McCain and Palin claim that Obama's proposed healthcare system is socialist. It is nothing of the sort. It is a variant of the employer-friendly, insurance-friendly "play-or-pay" scheme discussed in the 1990s. Employers will be given the choice of providing tax-favored health insurance to their employees or being taxed to support a public insurance system. Over time the latter might expand, but for the foreseeable future our dysfunctional private insurance system will survive.

But what if Obama had proposed a single-payer system of "socialized medicine" instead? The bible of free-market libertarians is Friedrich von Hayek's "The Road to Serfdom" (1946), which, like the other Bible, few acolytes appear to have read. In his masterpiece, von Hayek attacked central planning, but made it clear that his arguments did not apply to government-run healthcare systems like that of postwar Britain.

Another champion of healthcare socialism was the late Milton Friedman, the Nobel Prize-winning libertarian economist who popularized free-market fundamentalism in tracts like "Free to Choose." While he favored individual health savings accounts for minor expenses, Friedman proposed that major costs be paid for by mandatory catastrophic healthcare coverage run by the federal government. Ronald Reagan -- yet another socialist like Obama, it appears -- liked this redistributionist idea so much he proposed its enactment.

Milton Friedman's socialism did not end with healthcare. McCain and Palin claim that Obama is a socialist because he supports various refundable tax credits for the poor. A refundable tax credit is a government payment to those who make too little to pay income taxes, in the amount of the credit they could have claimed against their income taxes if they were more affluent. In the 1970s, Friedman pushed the granddaddy of all refundable tax credits, the Negative Income Tax, which would have replaced most in-kind welfare benefits with checks to the poor. Friedman's Negative Income Tax was proposed by that well-known leftist radical Richard Nixon.

The negative income tax went nowhere, but another refundable tax credit became the favorite tool of Ronald Reagan and George W. Bush in combating poverty -- the earned income tax credit (EITC), which is paid to workers with low wages. Conservative Republicans favor the EITC because it is a subsidy to sleazy low-wage employers. They also believe it averts political pressure for a decent, which is to say much higher, minimum wage. In other words, the EITC so beloved by Reagan and Bush is not only socialism but also corporate welfare.

Obama favors more progressive income and capital gains taxation. In spreading this kind of socialism and redistributionism, he was until recently allied with his fellow member of the U.S. Senate, John Sidney McCain of Arizona. McCain was one of only two Republicans to vote against Bush's 2001 tax cuts and one of only three to vote against his 2003 tax cuts. McCain, sounding suspiciously Bolshevik, explained why: "I cannot in good conscience support a tax cut in which so many of the benefits go to the more fortunate among us at the expense of middle-class Americans who need tax relief." What a commie.

Finally, Obama has been attacked by the right for proposing to lift the cap on how much income is subject to the Social Security payroll tax. On July 23, 2005, John McCain, asked by Tim Russert on "Meet the Press" whether he could accept lifting the cap on payroll taxation, replied, "As part of a compromise I could ..."

Without exception, all of the policies supported by Obama belong to broad categories of public policies that have been supported, in one form or another, by conservative-libertarian thinkers like Friedman and von Hayek and conservative politicians like Reagan, George W. Bush and McCain himself. The differences between them and Obama are differences of degree, not of kind.

But while this is true it may not matter, if McCain's last-minute clarion call is really a racial "dog whistle." The McCain campaign may appear to be debating public philosophy, when in fact it is making a disguised appeal to white racism. If that is the case, then "redistributionist" and "socialist" may be intended to be understood by white swing voters as code words that function the way that "welfare queen" did for the Reagan campaign. A "socialist" or "redistributionist" is a politician who taxes white people like Joe the Plumber and gives money to ... you know who.

If this is the tactic, then it might be working. The polls are tightening in the final days of the campaign. Should McCain surprise the pundits and pull off a victory, historians may judge that it was because of his desperate insinuation that white people would be taxed to pay for welfare for Latinos and blacks. And if he should lose, conservative operatives planning for the next cycle may decide that this was the right tactic, pursued too late. Whether he wins or loses, by using "socialist" and "redistributionist" in an environment in which they were likely to be interpreted as racially charged smears, John McCain may have damaged not only his reputation but our society.