Facing gloomy predictions for Tuesday, the candidate turns up the fear-mongering in Pennsylvania. 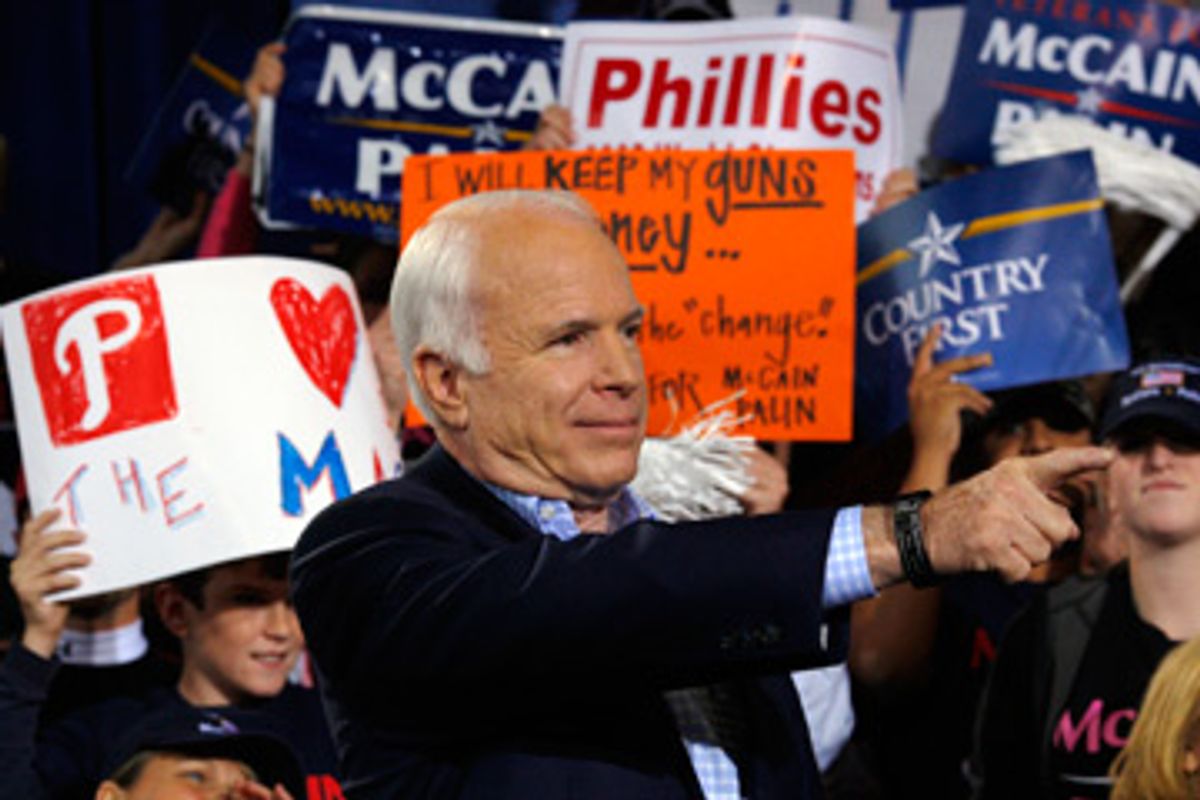 It was hard to believe he was actually saying it, but the words were really coming out of his mouth. Arlen Specter's, that is, at an afternoon rally for John McCain in Perkasie, Pa., a small town north of Philadelphia. Specter, the senior senator from Pennsylvania, was talking about his "sense" that Election Day in his state was going to be a rude awakening for Democrats, despite weeks of polls showing Republicans lagging far behind in this former swing state. That's when he let loose with his reason for optimism:

There are a "couple of hidden factors" in this election, said Specter. "The first is that people answer pollsters one way, but in the secrecy of the ballot booth, vote the other way."

Yes. That is what he said, to a chorus of hopeful affirmation. Arlen Specter was openly -- in public, into a microphone -- crossing his fingers, and hoping for racism.

Saturday's rally for John McCain put into perspective the previous two days of Pennsylvania gatherings for his running mate, Sarah Palin. The Palin rallies had been mammoth affairs -- 13,000 people in Williamsport on Thursday night -- shot through with fear, rabid social conservatism and xenophobia. But in comparison to the McCain gathering, the Palin rallies were upbeat, you-go-girl parties, undergirded by adoration for a candidate who looks like the future of the Republican Party, at least to her devoted base, and at which the fervent faith of religious supporters offered a comforting cushion in the face of predicted defeat next week: It is, after all, in God's hands.

In Perkasie, neither the speakers nor the jeering crowd of about 4,500 were planning to go so gently into that good night. This was a high-test rally, a tougher, meaner event, at which all the pent-up fear about the upcoming election, and the fact that John McCain was not the future, but the imperfect past, of a party possibly in crisis, was getting its loud, often thuggish release.

Specter followed Pennsylvania Attorney General Tom Corbett, who had blustered about his hunting down of thousands of drug dealers and defrauders of senior citizens, as well as those people who would "go on the Internet and try to touch our children in a way that should never be allowed." It was the same kind of fear-mongering that the Republicans have been doing all over Pennsylvania in these last weeks, but on Saturday it felt more shameless, more swaggering, more exploitative of those Americans perceived as weak -- the old, the very young.

Though the Pennridge Airport hangar was filled with far more men than had assembled for Palin's estrogen-heavy rallies earlier in the week, there were women here too, including former Massachusetts Gov. Jane Swift, who joked that for too long she had been the "only lonely member of the pregnant governor's club," until Palin came along. Swift assured the crowd that they could enjoy a privilege she didn't have in Massachusetts: "You can be responsible for putting John McCain on top," she said.

The rally got its cocky swagger back with Hawaii Gov. Linda Lingle, who managed to work the crowd into an anti-Obama lather with her heavily emphasized assertion that "people are looking for a person they can trust to lead America. They want to elect a president who is proud of their nation." Everyone able to crack the code on what Linda Lingle is saying here? She then turned to an argument that has mostly been heard on the Democratic side of the political spectrum for many months, imagining what supporters would say to their children and grandchildren down the road, when the little whippersnappers ask them, "What did you do when you had a chance to make a difference? What role did you play in that crucial election?" Surely, Lingle concluded, they would want to be able to say that they "worked every hour in those last few days to do everything [they] could to make sure this election turns out the way we know it should for the people of America."

Introduced by Cindy McCain (the McCains' daughter Meghan was also onstage), South Carolina Sen. Lindsey Graham played to the crowd of firearms enthusiasts, "The deer are glad you're here!" (Har! Dead deer!) Graham also had great fun at the expense of "the most liberal senator in the United States Senate," giving someone in the crowd the chance to yell, "He's more liberal than the socialists!" Graham then poked at "Joe the Biden," whom he called "the gift that keeps on giving."

By the time McCain began speaking, the crowd was good and riled, booing every time Obama's name was mentioned, and letting out random cries of "Obama sucks" and "He's a socialist!"

McCain worked them up further, talking about how the Illinois senator has recently said that this election has "vindicated his faith in America."

"I haven't been vindicated by anything," said McCain. Instead, he said, "I've been humbled and honored," by his campaign for president. McCain then began unloading on Obama, speculating that his plans to "spread the wealth" mirror foreign socialism, and that "the liberal left wants to try it here." Obama, said McCain, is "running to be redistributionist in chief," he's "running to punish the successful." By the time McCain got to the part about how the Obama campaign's "definition of rich has a way of creeping down," the crowd was thunderous in its booing and stomping and thundersticking.

Citing Obama's "massive new tax increase," and mentioning "higher taxes" as many times as his 20 minutes onstage allowed, McCain went even further, also reminding his admirers that "this is a dangerous year," and compared Obama, as others have, to John F. Kennedy, noting here that he had lived through the Cuban missile crisis, and didn't care to repeat it. "I know how close we came to nuclear war," leered McCain.

Outside after the rally, many of those who had hooted and hollered for McCain tumbled out into the early evening, still buzzing with pro-McCain, and anti-Obama, electricity. The most important message for the Republicans to broadcast, said 66-year-old Andy Roseweir, is "that we shouldn't turn our government over to the left wing," while 67-year-old Diane Jenkins said, "A Christian would never make the statement that someone would 'cling' to their faith." A 12-year-old boy dressed as a monster claimed to be Joe the Plumber a year after Obama's inauguration, and one man, whose name I won't use because he was genuinely confused, told Salon that he'd heard from his co-workers that Obama was raising 250,000 paramilitary troops to enforce his rule once elected.

Of course the crowd was filled with many reasonable, rational, kind people, people who simply prefer John McCain's economic policy, admire his war service, or believe that they are safer during wartime in his hands, but who also respect his opponent and the democratic process through which the choice will be made. After Betty and Bob Hart of New Hope, Pa., extolled the virtues of Sarah Palin and the patriotism of John McCain and worried about Obama's experience, Bob said, "I hope that all of us can recover after the election and be as one country." Would the Harts support a victorious Obama? "Oh, yes," they agreed immediately. "That's our president," said Betty with a warm smile.

But this rally, perhaps so close to the finish line, also brought out the anger in those less sanguine about Tuesday's outcome, those searching for an outlet for their ever-building fears. As he boarded a bus shuttling him back to the Pennridge High School parking lot, Eugene Davis Jr. confessed to being hoarse from shouting. "It was a way of letting off steam," he said. When asked what he was yelling, Davis smiled proudly. "One of the things I was yelling was 'No socialist, not now, not ever!'" he said. "If you heard that, that was me."