"My Lord, I feel something is happening"

Volunteering for an inspired Obama campaign in Pittsburgh, I couldn't help feeling that politics is being reinvented. 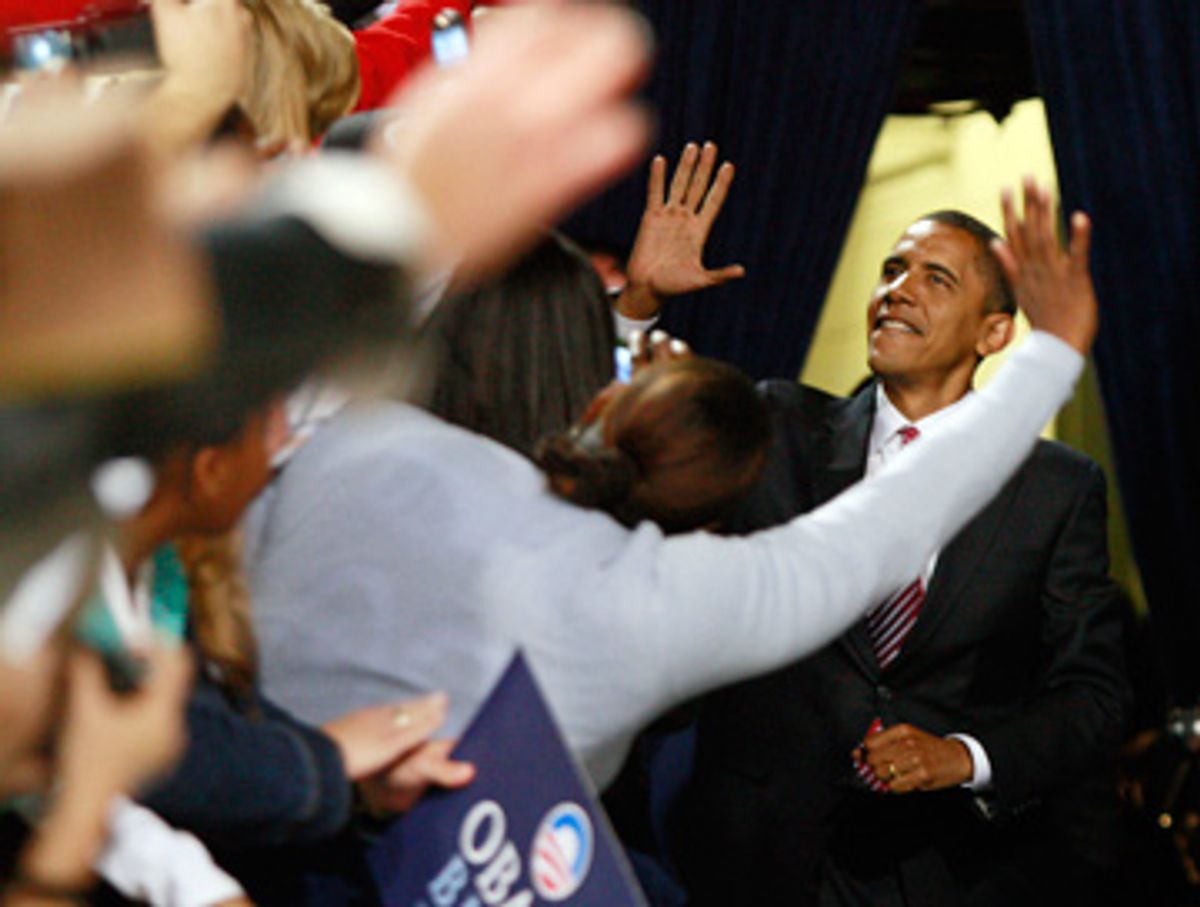 I am sitting at a call table at a Barack Obama campaign office with churchgoing black ladies. We are in East Liberty, a black neighborhood in Pittsburgh. The office sits on the same block as the county assistance center and a liquor store. Out on the street, old men are drinking out of paper bags and young kids are hanging out on the corner, watching a steady stream of volunteers with clipboards and Obama signs pour in and out of the office.

I am a 53-year-old white piano player and postal carrier from Oakland, Calif. I knocked on doors four years ago for John Kerry in swing-state Pennsylvania and just had to come back for Obama. This time, though, something feels different. The hubris of Bush and the neocons has brought about an inevitable backlash, and the ideological glue of the conservative movement has begun to melt. Evangelicals are beginning to embrace environmental and social issues and a few more working-class whites are coming back to the Democratic fold. Politics feels like it is on the verge on being reinvented.

Although a lot of the staffers at the East Liberty office are young and black, most of the volunteers are middle-aged black women. We are taking a break and chatting. Angela asks me if I watched "that Obama TV show" last night. "My Lord, I feel something is happening," she says. "I just want to throw up my hands! You know who we should be praising? We should be praising Barack's mama! She said he was born for greatness and she led him to it and believed in him."

Julia, sitting next to her, mentions that her church is getting together with two other churches for a prayer meeting. "We're going to pray for Barack's safety," she says. "We're going to ask God to open the doors of people's hearts for him, and to expose those who want to do evil to him before it happens. Before it's too late."

She tells me about racism in America today. She talks about traveling across the country not long ago and staying in a West Virginia motel, where she feared for her life when the other guests showered her with abuse. There was the time in Kansas when she stopped with her family for food at a diner. A little girl walked up to her and said she had never seen a black person before, and her mother yanked her away.

With U.S. Rep. John Murtha making news about calling Western Pennsylvanians racist, Julia tells me about her own awful experiences driving through those rural towns. "I will never go back there again," she says. I ask her what will change these people. "Prayer and love," she says. "It's hard to love these people. But Jesus didn't say it was easy. We just have to be firm and things will change."

"But these white voters are religious too," I say.

"Just because you get in your car and go in and out of your garage, that don't make you a car," she says. "These folks going in and out of church, but it don't make them religious. I have learned so much from Barack, the way he can just stand there and take it, and not get angry or lash out. I think that is the way."

Angela interjects, "I can't believe this is happening in my lifetime. The Lord has anointed him to be the bringer of change. I just feel it running through me." She begins to sway a little and raise her arms over her head.

In the past few days, the media has seemed to spotlight only bigots and religious right zealots in Pennsylvania, praising John McCain and Sarah Palin. But when I am assigned to assist in crowd control for the Obama rally at the Mellon Arena, I experience an entirely different Pennsylvania.

Outside the arena, lines stretch around the block. It takes over two hours for the lines to snake past the security and into the arena. Inside, the public address announcer declares, "And now I would like to introduce" -- a big breath goes up in the crowd -- "Dan Rooney from the Steelers!" A huge roar greets the owner of the Steelers.

The hall begins to stamp the floor and sing a Steelers chant. "Not now, not now," says Rooney, holding up his hands. "We are here for something else tonight." He says that he and his father have run a family business for 70 years, built on hard work and respect. If Wall Street would follow these simple rules, he says, we wouldn't be in the mess we are in now. "And here is a man who will bring these values back!" Rooney says.

Obama enters down the runway and up a set of stairs, shaking hands along the way, in no hurry to mount the podium. He is loose-limbed in person and walks on the balls of his feet like an athlete. Even his hands pump slightly like a boxer warming up as he climbs the stairs. The anticipation is intense. The two teenage black girls at my side are on their feet, straining to catch the first glimpse. I see their eyes tear when Obama appears out of the locker room gates. During the speech, they are on the edge of their seats, rapt and energized.

The candidate is totally at ease and completely confident. He is on tonight, sounding more populist and more incensed, as he speaks to the heavily union and minority crowd. I haven't been to a rally in 30 years and am amazed by how affected I am by it. Political rallies have always felt a little too much like pep rallies, building team spirit and locking in your identification with a party or a team. But here in Pittsburgh, the conflation of sports and politics seems innocent and unaffected in its affirmation of place, identity and political conviction.

As Obama speaks about keeping jobs here, about the tax cuts for working Americans and about the greed of Wall Street, the middle-aged remnants of the steelworkers union are standing on their feet. "Government doesn't work without you," Obama says. "Yes, government has to pay more for teachers, and yes, every child who wants a college education should have one. But teachers also should be accountable and parents have to take a lead in fostering an environment of learning at home. Turn off the TV," he yells. "Sit down with your kids and read." The crowd roars.

It does seem like a dream to see a black man speaking in front of such a wide cross section of America. "Our opponent says that there is a real America," Obama continues. "But I am sorry there aren't a real America and an unreal America. Soldiers in the trenches don't ask each other if they are red or blue. You can support the war and be a patriot, and not support the war and still be a patriot. We are tired of these old divisions and ways of separating Americans from each other. We are all Americans and what we share is greater than what divides us."

The big hall, reverberating with shouts and applause, feels small and connected. I am not sure I have ever said this: I am truly proud to be an American.

I leave the arena after the rally and join a stream of people walking through the Hill District to their cars and the bus lines. The Hill is the setting of many of August Wilson's plays chronicling the black experience. Poor and black, it figures in some of his plays as a metaphor for the intransigence of racism and the difficulty of change. I walk down its streets, past the old brick tenements, boarded up and derelict. Coming down after the high of the rally, people seem quiet and reflective. I stop and ask some of them what they thought of the event. With great pride, they all say the same thing. "I had to be here. I had to see history."

Jonathan Alford is a jazz pianist. He lives in Oakland, California