The end of a long journey for Obama

A final rally in the Virginia suburbs is the last stop in an epic campaign. 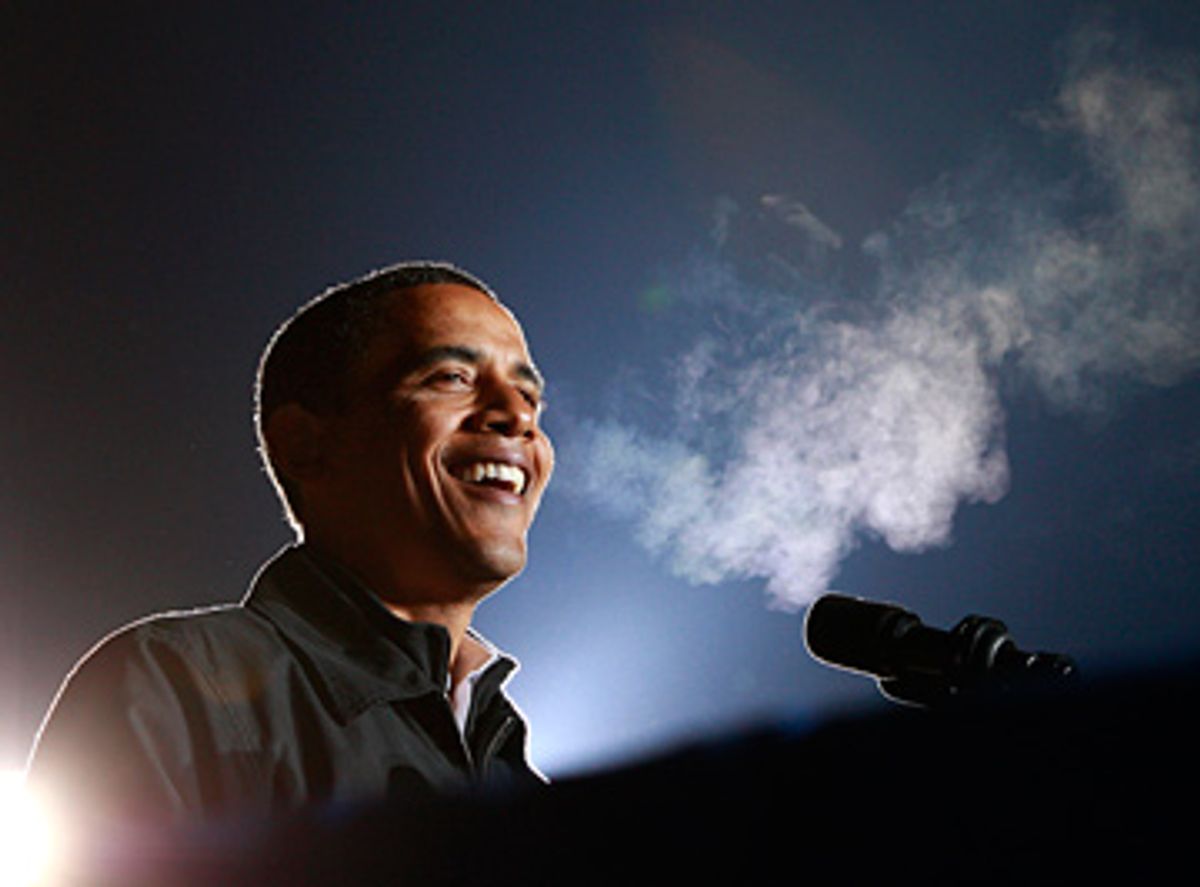 On a perfect autumn evening in this growing suburb of Washington, on the eve of an election he is favored to win, the Illinois senator and Democratic presidential candidate brought a crowd of 80,000 to cheers with a story of a long-ago rally attended by 20 hardy souls.

In his last campaign stop, Obama concluded his remarks with a story that was a staple of his amazing run-up to his pivotal Iowa victory the first week of January. It was the story prompted by a promise to a female state legislator from Greenwood, S.C., who said she'd consider an endorsement if he would make a trip to her small city. Though Obama and his staff drove out of their way on a rainy morning in late 2007 to attend a small gathering in the remote town, the trip turned out to be a useful diversion.

Obama's efforts to work the small room that day, he says, were no match for a small, boisterous old woman who "stole his thunder" by leading five minutes' chanting of "Fired up!" and "Ready to go!" Obama returned to this story to remind people how "one voice can change a room" and how that change can cascade to change a city, then a state, then a country and, eventually, the world. He closed his final speech by leading the massive crowd of supporters, many of whom had battled hours of traffic to stand outside for five hours to see him, in those same trademark chants.

Yet the overall mood in Manassas was strangely subdued. It's not that the crowd at the Prince William County Fairgrounds was reluctant or bored. You don't battle rush-hour traffic on I-66 to then stand shoulder to shoulder for hours -- and, for most, so far away that you can't see Obama without binoculars -- unless you are committed. It was, rather, the weight of the moment that hung heavy over the proceedings, the culmination of the longest presidential campaign in history.

It had been a long road for the press as well. As Obama was finishing his remarks, some members of the national media who had crisscrossed the country paused to take photos of one another. They know that somehow the pack will not be the same four years hence. So there was longtime Wall Street Journal fixture Al Hunt, now at Bloomberg News, pairing with Bloomberg colleague and writer Julianna Goldman, for a photo. Then the New York Times' Jeff Zeleny with Hunt. Then Zeleny and Goldman.

And then there was the guy in the brown leather jacket snapping some of the shots, none other than Obama advisor and wordsmith David Axelrod. Lest conservatives point to this as further proof of the cozy relationship between Democrats and the liberal media, keep in mind that these people have packed and repacked, filed and edited, piled onto and out of planes and buses, eaten expense-account dinners and stale doughnuts together for more than a year on a different, parallel journey that also came to a halt Monday night.

To be sure, there will be parties Tuesday night and, presuming the polls are correct, again during inauguration week. But tonight brought a journey to an end -- for Obama loyalists, for the media members who have seen him up close and the millions around America who watched him from afar. And so it was for the candidate himself, who regularly speaks of how the campaign has both humbled and inspired him.

"In this campaign, I've had the privilege to witness what is best in America -- in the stories, in the faces of men and women that I've met in countless rallies, town hall meetings, VFW halls, living rooms, diners," Obama said toward the end of his remarks Monday night, setting up the transition to his story about the fateful trek to Greenwood. "All across America, men and women shared with me their stories, spoke of their struggles. But they also spoke of their hopes and their dreams, their love for their children, their sense of obligations and debts to be paid to earlier generations." He spoke just hours after learning that his own grandmother had died.

The Greenwood episode brought Obama's message to a logical Election Eve conclusion, something Axelrod mentioned when I approached him just moments after Obama had delivered the last speech of his candidacy. "I think our closing message was very much our opening message," said Axelrod. "That's one of the strengths of this candidacy. We've been consistent, so I think people know [Obama] says what he means and means what he says. That's something people want in their president."

Asked if he could point to any one thing that worries him most on the eve of the election, Axelrod cited complacency. "I think people are being told we have a lead, but that doesn't mean anything if people don't vote." But you must feel pretty good, right? "I do feel good," he said. "How can you not feel good in a crowd like this?"

Afterward, the attendees marched back to their cars. Police on motorcycles and all-terrain vehicles worked diligently to keep State Road 234 clear so the campaign caravan of cars, security vans and media buses could make its way toward Dulles airport and the flight waiting to take Obama and his entourage to Chicago. People walked in two orderly streams on opposite sides of the road.

Because the remote section of 234 near the fairgrounds has no street lamps, the red and blue flashing police lights combined with a soft evening fog to blanket the road in an eerie, Technicolor mist. As Obama's noisy caravan approached from behind, people stopped, turned and broke into applause. It was a presidential moment worthy of a Lawrence O'Donnell script.