When the starry glow around his election fades, Obama will allow us to see ourselves in black and white. 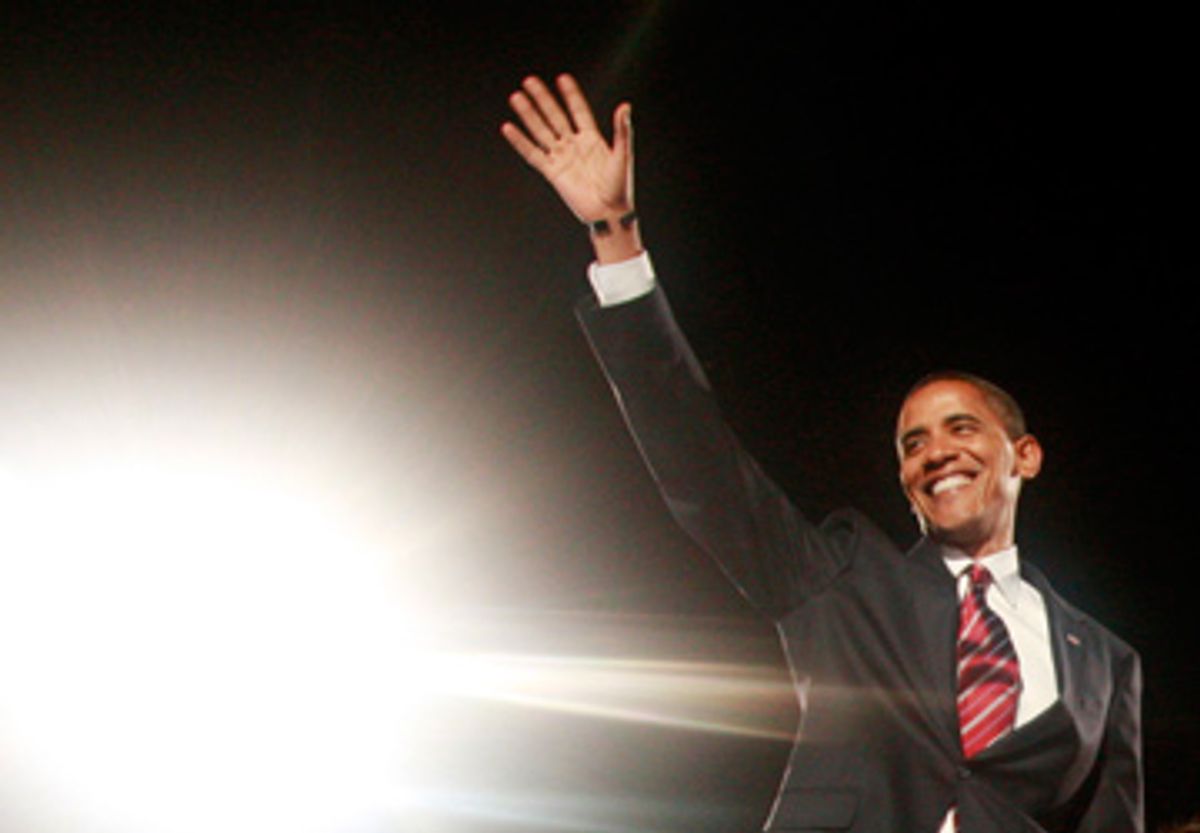 Voters across the United States and citizens around the world are calling the election of Barack Obama a historic moment, and it is indeed groundbreaking in many important ways. We have elected a man unashamed of his African blood into the nation's highest office. In historical terms, this is a milestone of race relations in the United States, a quantum leap unimaginable until this moment. For some cynics and paranoid supporters, it was impossible until the moment John McCain, in the most gracious and touching moment of his campaign, conceded.

Obama's presidency carries a huge burden of symbolic proof. As the president-elect's acceptance speech emphasized, his victory caresses America's image of itself as a place where equal opportunity exists for anyone who works hard enough. It helps erase a stigma against people of African descent that has lasted more than 500 years and included some of the lowest moments in our supposedly modern and enlightened age -- Jim Crow, apartheid, slavery. It allows people of all colors around the globe to point to Obama and feel as if their struggle may not be a dead end after all, and that someone who shares at least some of their experiences and perspectives can offer genuine respect and perhaps even empathy to millions who have so frequently been overlooked and despised. It is a sign to humanity that the United States can walk democracy like we talk it. This is no small thing.

But this big-picture vision of the Global Village as the Kingdom of Obamaland is too starry-eyed to hold sway for long -- maybe not even until he's sworn in. An Obama presidency by no means represents the end of racism, just a hopeful sign of the beginning of the end. To see it as proof that anyone can be president, no matter their origins, is ludicrous. It isn't as if Obama became president because the Electoral College has an affirmative action policy operating on a quota system. He is a man whose impeccable résumé, spotless personal history, elite education, leadership abilities, attractiveness, seriousness, sexual orientation, marriage to a woman of his own perceived race, whose gender, maybe even complexion and definitely choice of running mate have made him what some employers have a tendency to call "overqualified."

During his race for the presidency, many people had misgivings about Obama's supposed lack of experience, but few had anything to say about whether he had the appropriate qualifications to hold office, other than to wonder if America was ready for a president so suave he could play the first black James Bond. Perhaps if Obama were as inept as the man whose broken pretzels and hanging chads he will need to sweep up from the Oval Office carpet, yet still a contender for commander in chief, we could finally lay racial prejudice into its chilly crypt and be done with it. Because among other things, white supremacy has meant that unqualified but well-connected and rich white people's dreams have fallen into their laps, while overqualified people of color have striven their whole lives to get nowhere. Obama has cleared a path for fairness.

Still, privilege is no Death Star, and one Luke Skywalker can't obliterate it with a couple of lasers, no matter how well-placed. It did not vaporize last night, so in the Obama presidency we can look forward to some amusing and possibly infuriating contretemps that will arise from an African-American family leading the country. (Why was this never the premise for a sitcom?) The same battles will rage over affirmative action -- will we cheat ourselves out of the next Obama by cutting it back? -- and issues of discrimination in representation, education, housing, etc. For me, racism won't be over until a bunch of black people can move into a neighborhood and watch the property values rise.

Nevertheless, there are plenty of immediate, serious sighs of relief that we can now legitimately heave. The pendulum has swung the other way. Obama's long coattails have given Democrats a majority in the Senate and the House. Sarah Palin will have to return her expensive wardrobe and go study the Republican foreign policy playbook for at least four years. We will have the most intriguing first lady since, well, Hillary Clinton. Perhaps most important, Republicans will not choose the next couple of Supreme Court justices. The likelihood of a conservative majority overturning Roe v. Wade or other pieces of legislation important to the left has been severely reduced.

We are soon going to have an intelligent man in the White House, a literate guy who not only reads books but has written two himself. "That one" doesn't try to hide his background and attempt to broaden his appeal with a veneer of folksiness; instead he approaches others without pretense. He has a beautiful voice: calm, reassuring, persuasive, sexy. With just these superficial qualities, he has already done a great deal for America's image around the world. A McCain presidency, a Canadian warned me last night, would have made America "superfluous," the debt slaves of China. Already we've seen Obama's image on countless bootlegged T-shirts, chiseled into an FDR-like, constructivist symbol of progressive politics, creativity and open-mindedness. His election alone has rescued the world's opinion of America's ability to adapt and move forward.

But both radical leftists and radical right-wingers need to understand the same thing: Obama is not Malcolm X. He's not even Kanye West. His motorcade will not consist of souped-up cars with wheels that spin and bump up and down outside the White House; he will not sport a diamond grill that reads "PREZ." He's a moderate. The right has changed the definition of the liberalism over the last 40 years by hectoring Democratic candidates, saying that they will over-tax and -spend, even as the current administration chucks billions of dollars into the furnaces of Iraq and Afghanistan. It's hard to now imagine a president getting elected without claiming to be a fiscal conservative, certainly not as we climb out of the current financial disaster. As someone elected largely because of our failing economy, Obama will have to toe the line of fiscal policy pretty carefully and make a lot of practical and shrewd decisions fast.

On social issues, however, there's no comparison. John McCain's "health of the woman" air quotes could easily have lost him the support of even pro-life women. While there's no guarantee that Obama's brilliantly run, tech-savvy campaign will lead to a well-run White House, the decisions that we've watched Obama make have suggested reconciliation, sharpness, flexibility, ability to delegate responsibility to capable experts -- in short, a solid footing in the reality-based community. But one of Obama's great strengths can also melt into his most frustrating quality -- he tries to hear all voices without prejudice. His desire to listen to the Rev. Jeremiah Wright's claptrap surely cost him the trust of many Americans. There is a point at which a leader should be able to make a judgment about whether he's listening to a real viewpoint or just plain crazy-talk, and Obama's high tolerance for nut-job rhetoric may return to haunt him in the coming years. He may not want to waste too much time listening to lunatics, even if they happen to run foreign countries.

Obama's acceptance of his Caucasian genes is another quality that sets him closer to the center than to Malcolm X. I've said it before and I'll keep saying it: Obama's biracial. He's an African-American, certainly -- in strictly genetic terms, he's more literally African-American than other American black folks, whose veins are awash in various percentages of African, Native American and European blood. This is not to say that he hasn't received some of the same treatment as black Americans, or that he is not welcome among them, or that people should denigrate his need to make his background understandable to people who think that "biracial" means a type of airplane. It suggests something far less divisive. It means that black and white people (not to mention other ethnicities chained to the binary idiocy of American race relations) can share his victory equally.

As Obama gave his acceptance speech in Chicago, the media seemed to enjoy focusing on the elation of black communities in Harlem, in Kenya, and at Morehouse College, or on the tear-stained faces of Oprah and Jesse Jackson, as if black people had always been primarily invested in Obama's triumph. But we can't forget that the black political establishment and a big chunk of their constituency was initially very slow to warm to the candidate. (Well, except the Kenyans.) Here, he was the white man's black candidate, carefully vetted before winning the trust everyone seemed to think black people would lavish upon him based solely on his race.

Obama's Caucasian heritage has not evaporated just because he's the first American president to be unashamed to have a shot of espresso in his vanilla latte. By voting for him, whites have shown their acceptance on a major level, but if everyone continues to interpret his presidency primarily in terms of race, we're simply perpetuating the same old values. The Obama presidency gives us the opportunity to see more clearly into a future when the pain and injustice of the past, though it will not be forgotten, can be transformed into a shared purpose, and we can help the grand family squabble of American race relations to settle down. Like most American families, we'll have our differences, but we will be able to sit down at the same table and show each other some respect.