More than 125,000 witness history in Chicago 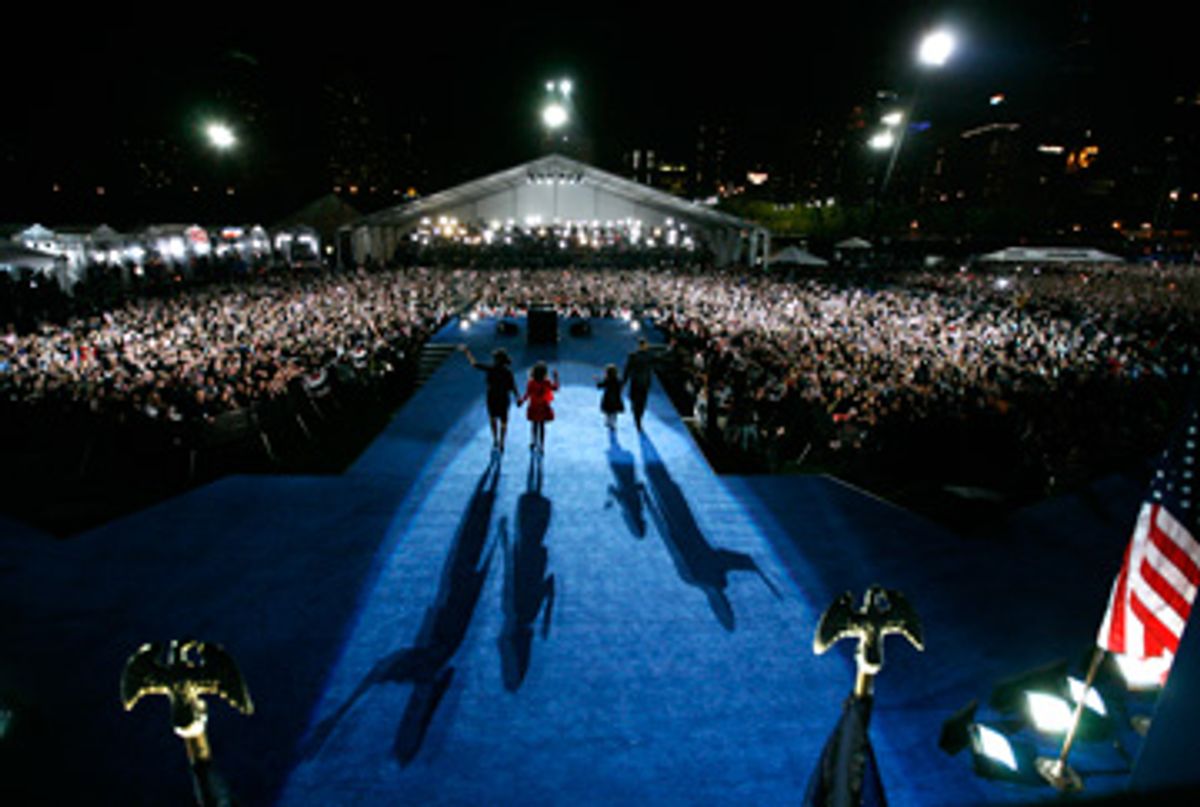 "Bliss was it in that dawn to be alive," wrote William Wordsworth of the French Revolution. "But to be young was very heaven!"

When the gates to Grant Park were thrown open at a quarter past 6 -- over two hours ahead of schedule -- the first of tens of thousands of Obama supporters cantered across the softball fields, as carefree as streakers, racing for a spot near the stage. It was festival standing for the final Obama rally of the 2008 presidential campaign.

"It's the transformative night of my generation," declared 26-year-old Mike Berenbom, who works in commercial real estate. "In the last couple elections, our generation talked a big game, but we didn't show up."

"Obama is the first post-baby-boomer president," Berenbom said. "He's getting us past the '60s. All this stuff about Bill Ayers and the racial issue, I don't give a shit. There's more important stuff out there, like the economy and alternative energy."

Berenbom had scored Chicago's golden ticket -- one of 65,000 Grant Park passes, distributed through Obama's Web site. Those who hadn't scored stood along Michigan Avenue, begging like Deadheads looking for a miracle.

"Anyone need a guest?"

Ultimately, at least 125,000 spectators, both ticketed and not, spilled into the sunken fields of Grant Park, which are walled in on three sides by skyscrapers. The Associates Center spelled out "VOTE 2008," using its windows as pixels. The CNA Building was a lite-brite American flag.

Even here in this Middle American city, the international following that this half-Kenyan politician has attracted was on display. Reporters from Italy, Hong Kong, Turkey and Norway packed the press pen, broadcasting the message that in the next four years, the world will see a different America.

"No matter how much I write, they want more," said a writer for a Danish newspaper. "On Sunday, we did 26 pages on the election."

"I bought it at Urban Outfitters," said Callery's wife, Kate.

Callery was absorbed in his BlackBerry. Back home in Dublin, his father was staying up late to watch the election, and texting results to Chicago. ("Give a mention to Paddy Callery," Eoin asked.)

"We'll have a black president someday," Callery promised. "Obama's got a third cousin just down the road."

A half-dozen Sudanese Lost Boys, all gangly 6-footers, stood together on a softball diamond. All first-time voters, they'd been guests on "Oprah" that morning.

"Everybody is just crazy in Sudan and Kenya," Kuek Garang said. "They are ready to beat the drum."

To Africans, "Obama is a bond, a bridge. There has been a gap between America and Africa for a long, long time. Obama, as a son of Africa, there will be a bond."

Of course, Obama's victory was a local triumph, too. Chicago Cubs überfan Ronnie "Woo-Woo" Wickers, who shows up at every big event, scored a ticket for this one, too. The back of his uniform read "OBAMA 08," and he'd altered his bleacher cheer for the candidate.

At 10 o'clock local time, CNN flashed "Barack Obama Elected President" on the Diamond Vision screen. There was an arena cheer, of course. But the personal moments were more important. Amie Sipp snapped open her pink cellphone and tried repeatedly to call her father, getting a busy signal every time.

"He's probably talking to all his friends," the 30-year-old public relations agent said. "I've had so many people calling me. Here's my mom calling."

Sipp's eyes pooled as she talked about the meaning of Obama's victory.

"It means change," she said. "Equal opportunity, no matter what color you are, you can do whatever you want to do, no limitation."

Couples stood with their arms around each other's waists, taking a quiet moment to absorb the fact that a black Chicagoan was president-elect of the United States.

But then, as he's been doing ever since his maiden speech at the 2004 Democratic National Convention, he expanded his message to encompass not only everyone on that field but everyone watching on every screen in every nation. The whole world was watching Grant Park, and Obama tried to reach each corner.

"If there is anyone who still doubts that America is a place where all things are possible, who still wonders if the dream of our founders is alive in our time, who still questions the power of our democracy, tonight is your answer," he began. "It's the answer spoken by young and old, rich and poor, Democrat and Republican, black, white, Hispanic, Asian, Native American, gay, straight, disabled, not disabled -- Americans who sent a message to the world that we have never been just a collection of individuals or a collection of red states and blue states. We are, and always will be, the United States of America."

But Obama's slogan wasn't meant to be fulfilled by a presidential campaign. It's an open-ended challenge -- for governing, for improving American life.

"We have new energy to harness, new jobs to create, new schools to build," the president-elect declared. "The road ahead will be long, the climb ahead steep. We may not get there in one year, or one term, but I promise you, America, we as a people will get there."