What does Obama's victory mean?

Responses from a platoon of reporters, bloggers, commentators, academics and policy wonks on the meaning of Obama's victory. 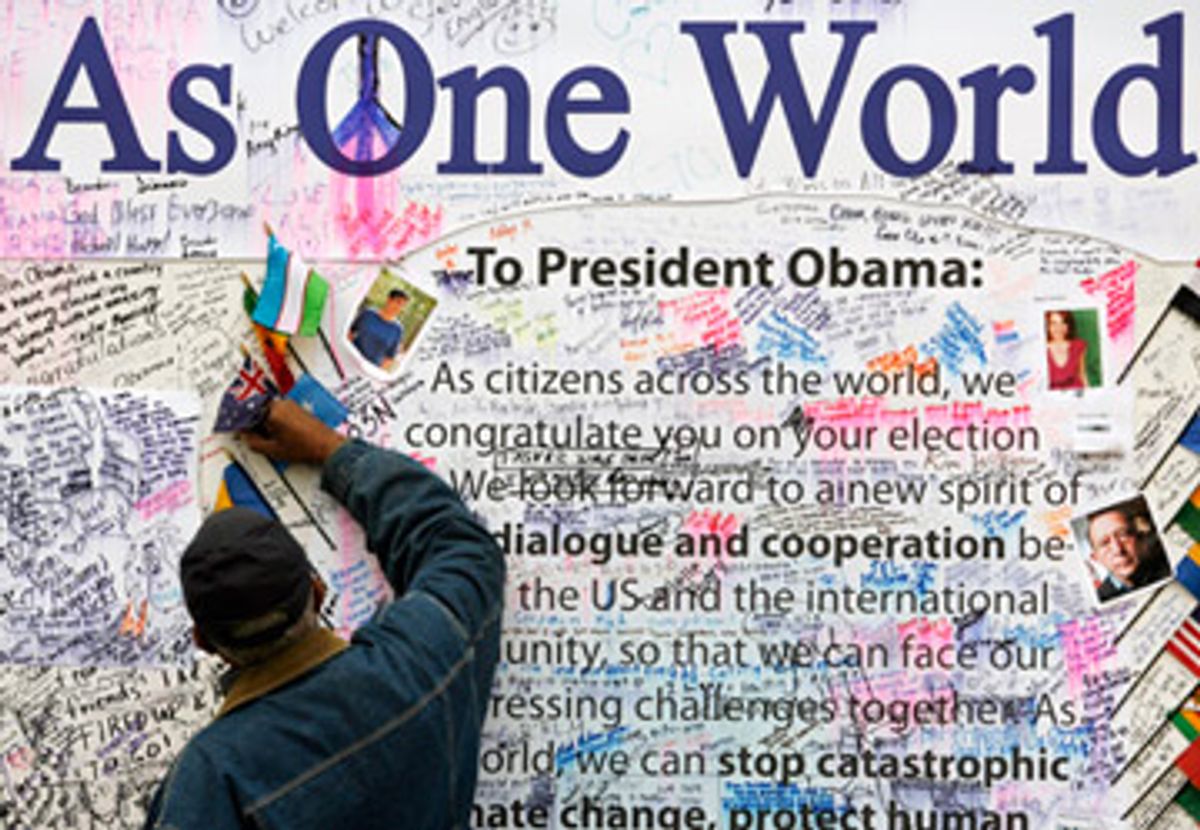 A man signs a message board dedicated to President-elect Barack Obama in front of Lincoln Memorial in Washington, Nov. 6, 2008.

Everyone agrees that Barack Obama's election sent a powerful message to the country and the world, that it was and is a meaningful moment.

But what, exactly, does it mean?

I solicited a platoon of reporters, bloggers, commentators, academics and policy wonks on what they think it means, forcing them to winnow down their answers to a single sentence that begins with the same two words: "It means ..."

Here are more than three dozen responses, sorted alphabetically. Some are funny, others serious; many are poignant, a few are edgy.

But all of them, I think, are pretty darn good. Here goes:

It means we can see the end of Nixonland from here.
-- Spencer Ackerman, senior reporter, the Washington Independent

It means "hope" is not a four-letter word ... but "Bush" is.
-- Sean Aday, associate professor of media studies, George Washington University

It means you can run for office no matter your name.
-- Kenneth Baer, Democratic speechwriter and principal, Baer Communication

It means the long national nightmare is over.
Dean Baker, economist, Center for Economic Policy Research

It means that after years of splintering divisiveness, we're back in this together again.
-- Jared Bernstein, economist, Economic Policy Institute

It means Americans are starting to realize that there's nothing compassionate about conservatism.
-- Brian Beutler, blogger, brianbeutler.com

It means the era of conservatism is over.
-- Michael Cohen, senior research fellow, New America Foundation

It means the 9/11 era -- of dealing with the world 9/11 created rather than using 9/11 as a political club -- has finally begun.
-- Brad DeLong, economics professor, UC-Berkeley

It means that my two sons will grow up in a country where everybody knows that an African-American can become president.
-- Henry Farrell, assistant professor, George Washington University

It means the Democrats have two years to show they can govern through effective, progressive policymaking … tick, tick, tick.
-- Tim Fernholz, writing fellow, the American Prospect

It means that, following the political equivalent of locusts, the plague, the trials of Job, and 40 years (more or less) in the wilderness, it is actually fun to be a Democrat again.
-- Kathy Geier, the G Spot

It means the world is ready to follow if America is ready to lead.
-- Mark Leon Goldberg, Undispatch.com

It means that we grabbed the steering wheel and pulled on the hand brake just before this bus called the U.S. of A. careened into the abyss.
-- Jaana Goodrich, Echidne of the Snakes

It means that the Republican Party has to give up appeals to coded racism and accept the reality that United States is a multiethnic democracy.
-- Jeet Heer, freelance journalist, Regina, Saskatchewan

It means that the conservative era is over, and a progressive one has a chance to begin.
-- Michael Kazin, professor of history, Georgetown University

It means Barack Obama now has earned the additional challenge of showing that he's not Bill Clinton, circa 1993, and that 2010 won't be 1994.
-- Ed Kilgore, managing editor, the Democratic Strategist

It means that the voters will punish incompetence, even at the cost of voting for intelligence and eloquence.
-- Mark A.R. Kleiman, professor of public policy, UCLA

It means that the 9/11 era is over.
-- Ezra Klein, senior editor, the American Prospect

It means the arc of the moral universe is long, but it bends toward justice.
-- Joe Klein, columnist, Time

It means the end of the great national nightmare that began on April 12, 1861, when Americans began the long struggle to determine what an American is -- that the hue of a citizen's skin does not determine their value to themselves and their fellow citizens of this great experiment.
-- Robert Mackey, historian and consultant, Washington, D.C.

It means that sometimes being "pro-America" means different things to voters than to politicians.
-- Mike Madden, Salon

It means that I will see a Latino president and Supreme Court justice in my lifetime.
-- Sylvia Manzano, political scientist, Texas A&M University

It means the North has won the Civil War.
-- Harold Meyerson, Washington Post columnist and American Prospect editor at large

It means market fundamentalism no longer has a veto and it is now possible to build an economy with widely shared prosperity.
-- Larry Mishel, Economic Policy Institute

It means America is not afraid!
-- Dayo Olopade, reporter, the Root

It means there is more to America than is dreamt in Karl Rove's philosophy.
-- Harold Pollack, public health researcher and writer, University of Chicago

It means that the term "proud conservative" is now more toxic than "San Francisco liberal" ever was.
-- Sarah Posner, columnist, the American Prospect

It means the Democrats have a once-in-a-generation opportunity to make good on some bold promises.
-- Eric Rauchway, professor of history, UC-Davis

It means national conversations about sexism and homophobia are up next.
-- Alyssa Rosenberg, staff correspondent, Government Executive

It means, as a friend in Tbilisi, Georgia, said to me today, that our nation managed to "push the reset button," and in one action, revived all the wonderful, idealistic overtones that go with the word "America."
-- Jeremy Rosner, Democratic pollster, Greenberg Quinlan Rosner Research

It means, as ever, that America is capable of surprising itself -- and the world.
-- Tom Schaller, Salon

It means I can start watching State of the Union addresses and presidential news conferences once again, without feeling embarrassed.
-- Gary Segura, political scientist, Stanford University

It means Barack Obama will be able to get a cab in New York anytime he wants.
-- Adam Serwer, the American Prospect

It means that some right-wing entrepreneur will be on the market with the "Obama Countdown Clock" within the week.
-- Walter Shapiro, Salon

It means that we can finally have someone represent the black community to mainstream America who isn't Jesse Jackson, Al Sharpton or wearing a summertime fur coat and platinum chains.
-- Jesse Taylor, founder and editor, Pandagon.net

It means sunset has arrived after Reagan's morning in America, and it's now the optimistic dawn of a bright new day.
-- Mark Thoma, Economist's View

It means the beginning of the end of a nightmare that began on Nov. 4, 1980.
-- Jonathan Weiler, political scientist, UNC Chapel Hill

It means that principled, visionary domestic and foreign policy need not come at the expense of morality and justice.
-- Patricia Weitsman, political scientist, Ohio University