Will Barack Obama have a honeymoon?

His mandate is bigger than any Democrat's since Lyndon Johnson, bigger than first-term Ronald Reagan's. But he won't get breathing room unless we demand it. 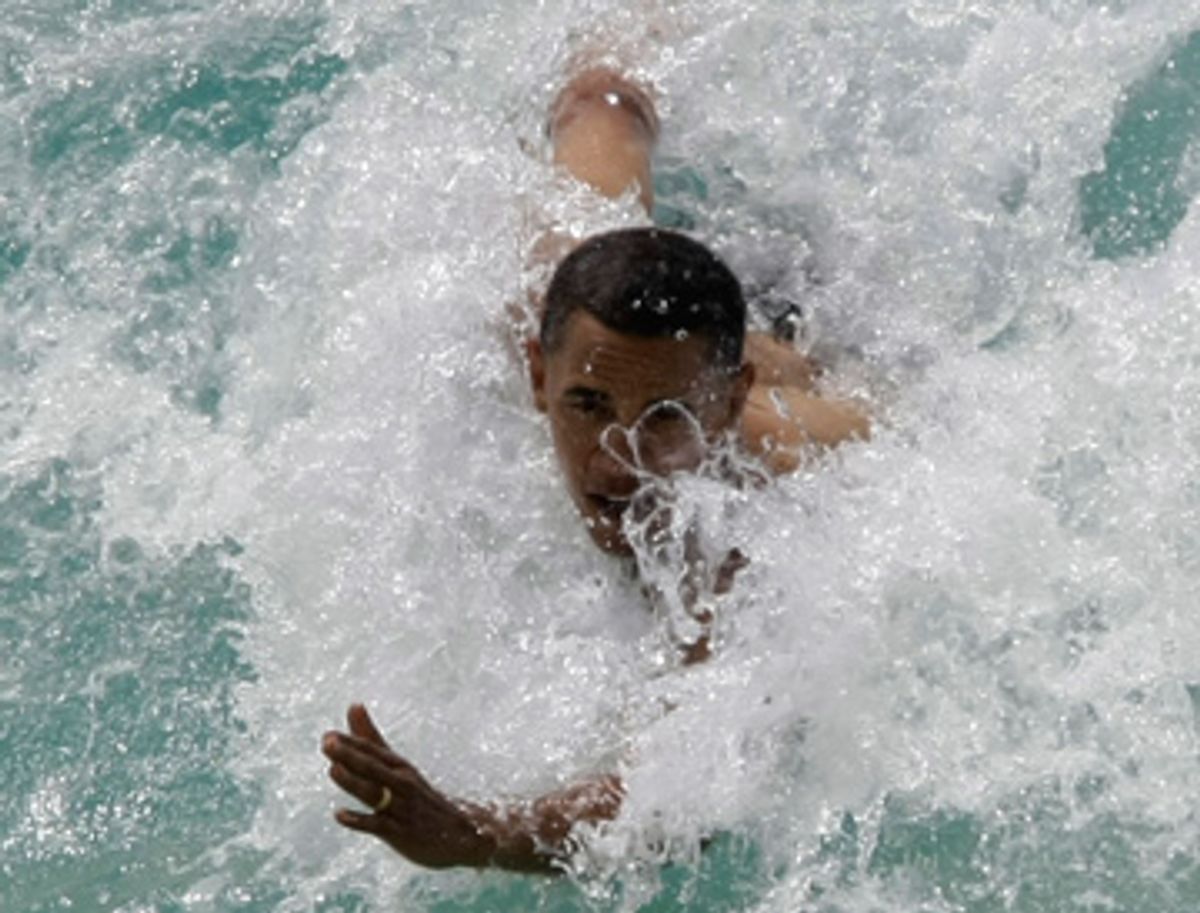 I woke up Wednesday morning after Barack Obama's inspiring victory to a chiron on MSNBC warning about "The Danger for Dems." Scary! They just won the White House and increased their majorities in Congress, so what could it be?

Well, that was the very danger, it seemed: overreaching, now that Democrats control two branches of government. Over on CNN a moment later, a poll was asking voters if they feared Democrats having that control, even though they just gave it to them.

So here we were: Just 12 hours after America joyously elected its first black president, with a popular-vote margin bigger than any Democrat since Lyndon Johnson in 1964, plus solid congressional Democratic majorities, we were back to equating Democrats with "danger" and "fear."

Wake me when it's over. Except, of course, it will never be over, as long as Obama is president.

I can't even aggregate the links to mainstream media stories warning that the Democrats have to ignore their liberal base because this is a "center-right" country -- there are too many of them, and only one of me. Salon group-blogged about that theme early Tuesday, and I took the role of "conservative" with Glenn Greenwald and David Sirota, saying I did believe Obama has to reach out to moderates and even willing Republicans to sell the country on his policies. I still believe that.

But I also believe he has to respect his own mandate, and govern in a way that honors those who voted for him, accomplishes what he promised and, hopefully, lets him get reelected to finish his work. Democrats just never seem to get around to doing that, which is something I'd like to see Obama change. That would be change I could believe in.

And let's be clear, Obama has a mandate. Not only did he win a bigger victory margin than any Democrat since Johnson, it was a bigger margin than that of first-term Ronald Reagan, and either-term George W. Bush. Yet those conservative Republicans wasted no time claiming a mandate. Obama, like Reagan, saw his presidential win accompanied by big Democratic victories in the House and Senate. I don't remember pundits warning Reagan and his GOP majority to reach out to Democrats. (I suppose it's possible I simply don't remember, I was just finishing college. Use the letters section to tell me if I'm wrong.) Even today, though, I never hear anyone say: Reagan really should have governed from the center.

So why are pundits saying that about Obama?

One reason is, even if you can get agreement on Obama's having a mandate, there's no consensus on what it means. Given that he ran and won against a guy who labeled him a radical Marxist socialist, I could argue that his mandate is quite far to the left.  I don't think that's true. I think it is fair to say, given the role the economy played in this election, that Obama has a mandate for a new dynamism on the economy, with a strong government role on the side of fairness, equity and creating wealth for many, not just a few.

Let's face it, when you have a Republican Treasury secretary essentially nationalizing  banks, it's silly to pretend we're still debating whether government should interfere with the free market. That's done. The question is different: Should the government only intervene to help rich people, hoping that help will trickle down? Or should it use its power to, well, spread the wealth, and make sure the economy works for everyone?

I think Obama's priorities are already clear. Luckily, what he has laid out as early priorities mesh with what the world is handing him. It's obvious he has to start with the economic meltdown -- figuring out whether the $700 billion bailout plan already passed can have real impact; whether he can get bankers to lend the money Henry Paulson gave them; overall, how to fix it so it works. He should also be driving whatever economic stimulus package the congressional leadership is proposing, whether it happens during the lame-duck Congress  or in January.

When it comes to the question of bipartisanship, I think Obama should a) remember that  Democrats elected him and b) reach out mainly to Republicans who reach out to him, who want to be about a new way of doing business in this country. He shouldn't reach out merely for the sake of bipartisanship; he can't afford the gridlock that would ensue by bringing someone who opposes his policies into his "team of rivals" to obstruct him. I believe there are Republicans and moderates out there who've had their hearts broken by Bush's mendacity and incompetence, and partly healed by Obama's vision. Colin Powell or Chuck Hagel might be among them. I won't go that far with Condi Rice.

As to governing from the center, I say, "Sure!" I'm a conciliator. But I'd stipulate that we need some help determining where the center is. The Reagan and Bush revolutions tore the center from its moorings and dragged it so far to the right, Sarah Palin is just a nice conservative mom instead of a Christian extremist. Can we get someone to locate the actual political center for us? Isn't this something that's kind of empirical? I'll ask our staff to get some pollsters and policymakers on it, and we'll get back to you. But in the meantime, I'd stipulate that the elections of 2006 and especially 2008 tell us that the country is center-left, not center-right. (Even Fox News agrees with me! That's scientific evidence!) If we all agree, I'm happy for Obama to govern from there.

One last problem with bipartisanship and working with Republicans. Um, the Republican leaders, at least in the House of Representatives, well, they just don't want to reciprocate. Here's angry John Boehner, the House minority leader, via Talk Left:

America remains a center-right country. Democrats should not make the mistake of viewing Tuesday's results as a repudiation of conservatism or a validation of big government. Neither should we. Instead of throwing in the towel, as our opponents demand, we must redouble our efforts to develop forward-looking solutions to the challenges Americans face -- solutions rooted in the enduring principles of reform that define us as a party. We need to focus on winning the issues, one by one, and presenting principled, superior alternatives that reflect the center-right priorities of the American people, rather than the self-serving priorities of Washington.

On "Hardball" Wednesday, Chris Matthews told me and BET's Ed Gordon that Obama deserves a political "honeymoon" to take his best shot at ending gridlock, enacting his promised policies and moving the country forward. Matthews named Bill Kristol as somebody who shouldn't get to control the debate and neuter Obama; boy, do I agree. But I told Matthews that he -- along with me and Gordon and everyone who appears on cable news shows -- could play an important role as well. We can focus on the issues: the best bailout plan, the best stimulus package, the best way out of Iraq. And we can ignore faux campaign or transition scandals, as well as the best GOP plot to turn Obama into Bill Clinton into Jimmy Carter into Michael Dukakis into Karl Marx. I hope Matthews agrees with me. We'll see.

The good news is, the Republicans have never done any of this without help from the media. And today, we are the media. I don't just mean we, Salon, or me and Chris Matthews; I mean you. The Obama campaign blurred the lines of organizing and media; it activated a new network of people not only giving their credit card numbers but starting blogs; talking back in the comments on anti-Obama stories, wherever they are; evangelizing on Facebook. (But can you all change your names back to your real ones now, without Hussein? I'm looking at you, Dwayne).

Seriously, though, if Matthews doesn't take up my challenge, thousands, maybe millions, of you will. It's a different world today. We just have to use the power we don't quite yet know we have.