How Obama won, by the numbers

The polls were right after all, and it was the economy, stupid, but there were still some surprises in the final results. 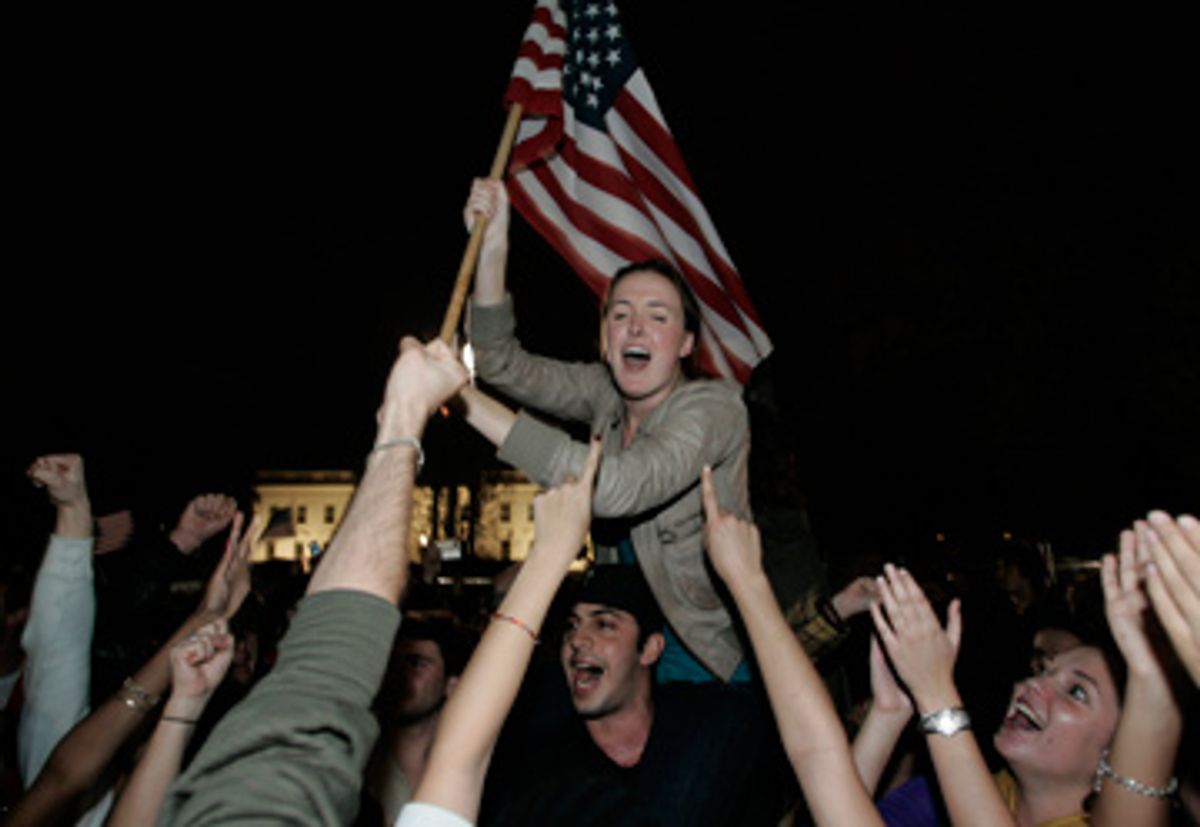 While some more mail-in ballots must still be counted on the Pacific Coast, it appears that Obama has won by approximately 6 percentage points (it may yet rise to 7), garnering just over 52 percent of the vote. And depending on the final outcome in North Carolina and the "rogue" Nebraska 2nd Congressional District, he may have won 364 electoral votes. Both the margin and the electoral count appear to be almost precisely what the average national poll result forecast and the compilation of state-by-state polls suggested as well.

First, the extraordinary support Obama won among young people and African-Americans. I speculated last spring in this space that these two factors alone would pretty much eliminate the Bush-Kerry margin -- I believe that to be exactly what occurred. The 18-to-29-year-old cohort supported Obama by a 2-to-1 margin (66-32), and while it is too soon to gauge precise turnout measures, their numbers clearly grew. Likewise for blacks, who responded to the history-making call of Obama with a 96 percent support level, dwarfing the margin earned by other recent Democratic nominees, and also apparently voting in higher numbers throughout most of the old Confederacy.

Second, the financial crisis. While I believe that without the collapse of Lehman Brothers and all the chaos that ensued from that September weekend Barack Obama would still have ridden the wave of change to victory, his margin was clearly enhanced by the dominant role played by the economy this fall. The Upper Midwest and Industrial Belt became a killing zone for John McCain -- as Obama carried every state between Boston and St. Louis, and apparently only narrowly missed extending that command west to Kansas City with a victory in Missouri. In my home state of Wisconsin, Obama's margin mushroomed to an extraordinary 13 points. Just look at any of the electoral maps of the Badger State and realize that all that blue was produced by nearly all-white rural counties and small towns that many thought would never support an African-American candidate.

Third, the actual performance of the two candidates. The flip side of a change candidate, particularly someone as new to the national scene as Obama, is always risk. And the McCain campaign signaled very early on that it would try to exploit its man's advantage on experience and national security matters against the untested newcomer. And yet the other axiom is that presidential debates are the province of the challenger, for they allow him (or her, though Palin didn't quite pull off her version) to pass through a credibility or acceptability threshold with the electorate -- to increase the comfort level, if you will. Obama did just that in the three debates, and it didn't hurt that for one critical period McCain seemed to come unglued, suspending his campaign, threatening to pull out of the first debate, and setting up shop in Washington to no apparent end. The supposedly risky candidate became the steady hand, and vice versa.

Here's what else we have learned from the dimensions of this victory:

1) Turnout rose, but only selectively. It may actually have dropped in California and parts of the Northeast, where the outcome was never in doubt and the candidates did not compete for votes. But there were large gains in Florida, North Carolina, Virginia, South Carolina, Texas, Alabama and Georgia, obviously a product of African-American voting, but also of simple population growth. And there were also large gains in Indiana, Missouri and Nevada, all testaments to the Obama organization as well as the late media focus on the close battle in each of those states. Actually, I am willing to guess that a couple of million or so Republicans who voted in 2004 stayed home this year -- Ohio's vote actually seems to have declined.

2) The map was pretty much what I laid out last May, with two big exceptions. Obama produced the predicted Western sweep, with impressive victories in Colorado, New Mexico and Nevada, buoyed by young voters but also 65 percent support among Latinos. Obama won impressively in Virginia and perhaps narrowly in North Carolina, an exacta I hinted at last spring but frankly thought would be limited to just the home of Jefferson. He dominated the supposedly close swing state troika of Michigan, Pennsylvania and Ohio. The surprises were the breakthrough win in Florida, and the narrow victory (as of this writing) in Indiana. The latter was an incredible feat that only those of us associated with Sen. Evan Bayh (I was his pollster in the run-up to his decision not to run) thought possible.

3) Within that map, there has been a lot of moving and shaking from 2004. Obama's national vote share will rise about 4 points from that earned by John Kerry four years ago, from 48 to 52 percent. Here are the current leaders in improved Democratic presidential vote, 2008 over 2004 (precise numbers subject to change by final vote tallies):

Hawaii +18 (this, not his margin in Illinois, was Obama's real home-state edge)

Delaware +9 (the other home-state edge)

Stop for a second. Look at the six states I've just listed (after Delaware) and realize one fundamental fact about all of them. There is no appreciable African-American population in any. These are gains that Obama registered among whites (and in the case of New Mexico, Hispanic voters), GOP turnout decline or no GOP turnout decline. And if you remember my "Northern" theory, it is not a surprise that the whites who would move toward Obama live in places with few blacks and therefore little intra-racial antagonism or perceived threat.

The single striking regional exception is the Deep South. One can certainly speculate that there Obama's gains among white voters were either nonexistent or negligible. But again it is the marvel of the Obama ground game that it produced huge performance increases in Indiana, North Carolina, Montana and Virginia, as well as the three crucial Southwestern states -- places the campaign clearly targeted as opportunity red states from the get-go. Some of the map expansion talk was a feint, trying to draw McCain's money away from key states, but most of it was real, and it paid off handsomely.

4) He only got half the congressional loaf. As of this writing the Democrats have picked up five Senate seats for certain, and very possibly another to come in Oregon, but have fallen short of the filibuster-proof majority some hoped for, as Alaska's Ted Stevens appears headed for a narrow victory, Minnesota's Norm Coleman leads Al Franken pending a recount, and the Georgia runoff would still appear to favor Saxby Chambliss. They were thus stopped well short of a filibuster-proof majority. And the gains in the House appear to be around 20 seats, and not the more bullish 25- to 30-seat gain that many were forecasting. Is this good or bad for Obama? Some might argue he got all the responsibility of a near-landslide win without the strongest possible team to execute that responsibility. Others might claim that the limits placed on Democratic power and hubris might be a good thing, and lead to more consensus building if not outright bipartisanship that will better preserve what, after all, is still a pretty fragile majority against the turmoil undoubtedly to come.

And finally, a personal note. Twice in my life I have found myself shockingly overcome with emotion when I least expected it. Once came at the end of what I had been thinking was a good, but not great, film about baseball, the sport I love, "Field of Dreams." Kevin Costner started throwing catch with the ghost that was his father and I lost it.

Last night a victory occurred that I had expected for months. After Sept. 15, the outcome for me was never in doubt and I chided fellow Democrats for their Nervous Nelliedom or suspicions about Republican high jinks or racist backlash. "He's going to win -- and pretty big," was my constant refrain. And as a hired gun who knows some of Obama's top command, of course I had mixed feelings. In part I was envious of their incredible success. That's the nature of a highly competitive industry. Ten minutes before 10 p.m. Central, I realized what was going to happen when the next hour hit and the West Coast polls closed, and I called my wife and told her to make sure our 16-year-old daughter, who had volunteered for Obama here in Madison, was watching. And then came the announcement, and the crowd shots from Grant Park, and tears just started to flow. My country had done something so extraordinary, so unthinkable just a few years ago, so inspiring. We didn't erase the stain of slavery and racism, but we sure did bury it -- at least for a while.