Gays in the age of Obama

For many, the jubilation over the new president is greater than the sorrow over Proposition 8. 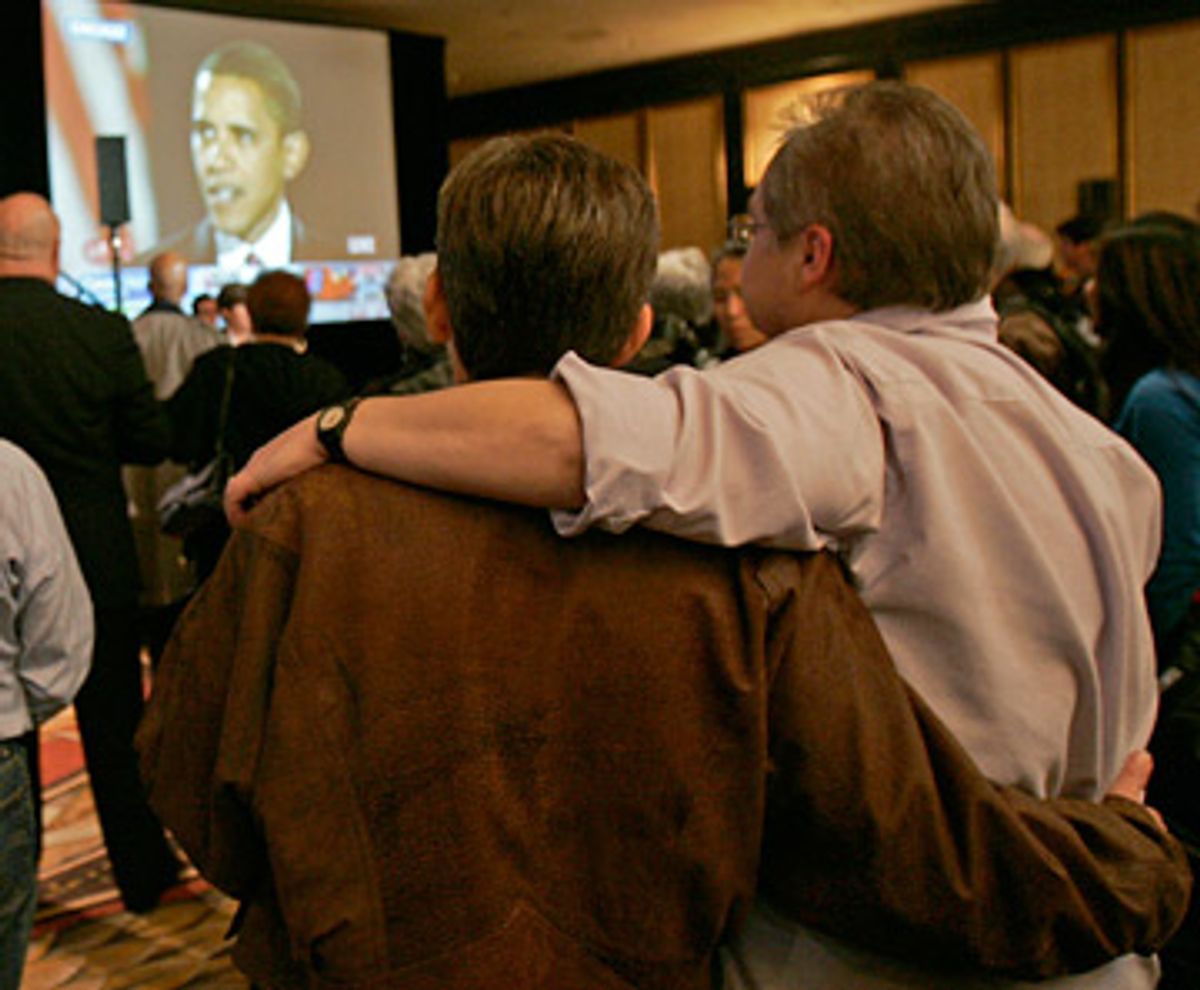 This is the image I'll always remember from Election Night 2008.

A gay man standing outside the grand ballroom of the St. Francis Westin Hotel in San Francisco. He had one finger to his ear to block out the hubbub inside, and an iPhone clamped to the other. "Honey," he was yelling into the phone, "I cried -- when Obama spoke, I cried."

Inside the ballroom it was bittersweet. Barack Obama was the president-elect. But same-sex marriage was being overturned by California voters. Proposition 8 was winning by a slim margin, but winning. In Arkansas, an adoption ban passed. In Arizona and Florida bans on same-sex marriage passed easily.

All this on a night when Obama swept the country in a landslide on a promise of change. On a night when pro-choice groups racked up victories. Even chickens had something to rejoice about in California.

In the end it seemed the gays were the scapegoats, the ones left behind at the back of the bus.

Had we asked for too much, too soon, from a country that was not ready to give us the full measure of our dignity?

It didn't seem that way in the ballroom of the St. Francis. In the heart of San Francisco's gay neighborhood, the Castro, it was New Year's Eve come a few months too early. But not any New Year's Eve -– a once-in-a-lifetime turn of the century.

"It was insane," texted a friend. He said the streets had turned into a giant party. People were hugging, kissing, shaking the hands of strangers. Even in the ballroom of the St. Francis, where the most committed same-sex marriage activists had gathered, the emphasis was on the sweet in the bittersweet.

I think for one very precious moment we were larger than ourselves. In a country beset by identity politics, we'd soon be analyzing the Latino vote and the Asian vote. Did the black vote tip the balance on same-sex marriage? What about the youth vote? All that would come later, in the dissection and redissection of the polls. But for one emotional, uncynical moment we were reveling in something that was bigger than all of our labels.

It's not a post-racial America by any means. But it was a moment when many of us could look at each other and after a long time say not "the president of the USA" but "our president." That feeling, however ephemeral it might be, is more powerful than any ban on any marriage ceremony anywhere.

Gay men and women are resilient. They had relationships before there was even a name for the movement. They had babies and families and didn't wait to ask for permission from the larger society. Their families are growing up all around us, marriage ban or no marriage ban. My gay friend's twin daughters went out this Halloween in matching skeleton outfits, collecting their treats with confidence and charm. They will not stand for their families being outsiders in America. Even now 61 percent of people under 30 supported same-sex marriage.

In some ways what was astonishing is that it had come this far so soon. Over and over again I heard on television people say, "I didn't think I'd see a black man become president in my lifetime." I must admit I didn't think we'd be voting on same-sex marriage, and coming within 500,000 votes out of 10 million, in mine. Even eight years ago, when Proposition 22 banned same-sex marriage in California, the margin was 61.4 percent to 38.6 percent. Now it's less than 5 percent .

The election of a black man to the presidency was a powerful symbol of a psychological change that had started with the legislative changes of the civil rights movement. The gay community knows that. It is fighting its battles in courts to change laws. The day after the election, groups filed a lawsuit asking the courts to invalidate Proposition 8 even if it passes. But the vote on Prop. 8 showed it has some ways to go in changing hearts and minds.

That might have to happen the hard way -- one person coming out at a time to their families, communities, co-workers.

But if the victory of Barack Obama shows anything, despite whispers of the Bradley effect and coded messages on robo-calls, it's that yes, we can.

My friend who had volunteered for the first time in his life in the same-sex marriage campaign was disappointed. He had stood at the turnstiles at the BART station in Fremont to hand out fliers. He said: "Tonight would be perfect if we could win this one too." That was true.

But still I say the man outside the ballroom summed it up best for me.

But for Barack Obama.