Despite its over-the-top raunchiness and preoccupation with "boobies," this comedy is more sweet than edgy. 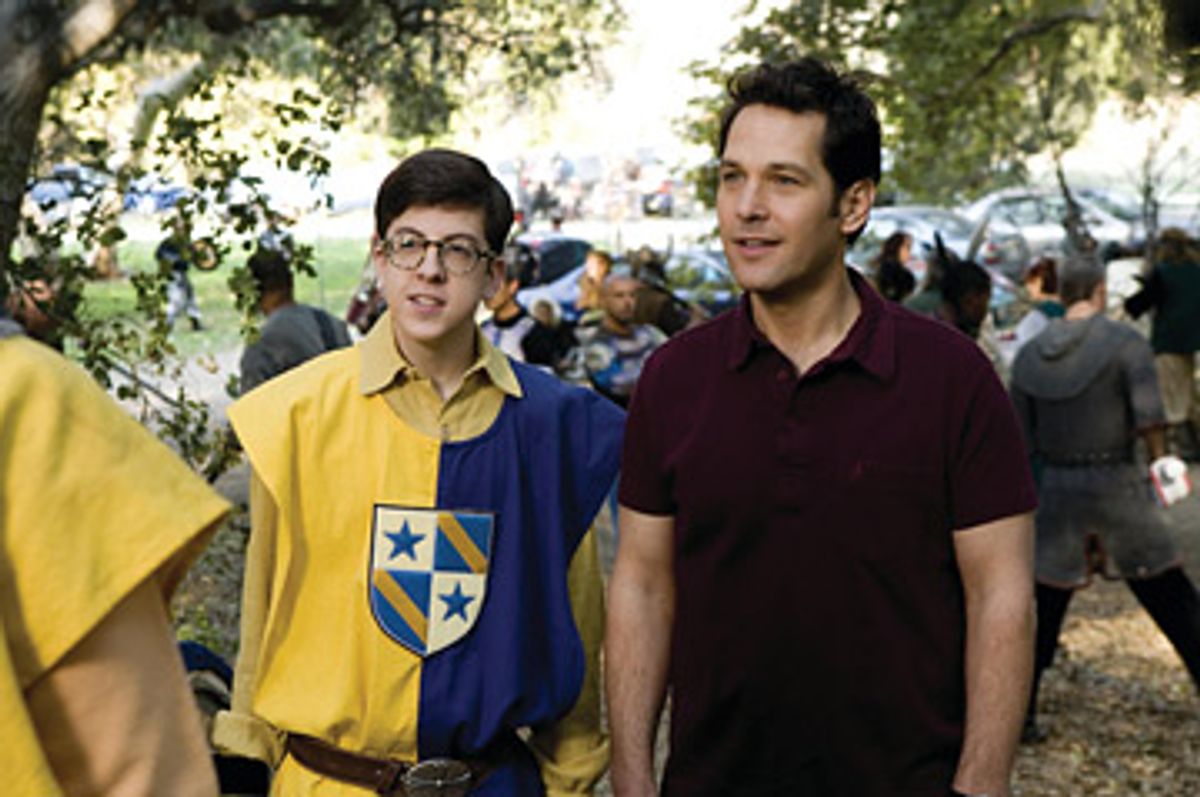 The problem with disreputable comedies these days is that just about every comedy that's released is disreputable: Now that every so-called funny movie is packed with crude humor and swear words, there's very little respectability to rebel against.

I say that not as someone who disapproves of raw language and toilet humor, but as someone who has spent a lot of time and energy defending them, and even more time enjoying them. So I had high hopes for "Role Models," in which Paul Rudd and Seann William Scott play, respectively, Danny and Wheeler, two guys who work as reps for an energy drink called Minotaur (it's Wheeler's job to dress up in the furry half-bull, half-man suit) and who haplessly end up on the wrong side of the law. As punishment, they're forced to serve as big-brother types to wayward, troubled and in some cases just plain nerdy youth, through a program called Sturdy Wings.

This wouldn't be such a bad idea, except Danny and Wheeler aren't so exemplary in the good-attitude department: All Wheeler wants to do is party, and Danny is so cynical that he barely seems to care about anything, which is part of the reason his girlfriend (played by Elizabeth Banks, in a small, thankless role) has just broken up with him. "She says I take no joy in life," he explains in a drab monotone.

Wheeler is matched up with a savvy, foulmouthed munchkin named Ronnie (Bobb'e J. Thompson); Danny's charge is Augie (the charming Christopher Mintz-Plasse, of "Superbad"), a gawky teenager who's obsessed with medieval role-playing. Ronnie likes to do things like draw obscene pictures in which Beyoncé Knowles figures prominently; he also says the word "boobies" a lot. Augie is just an awkward kid who's too scared to talk to the girl he likes and who's persisently bullied by the ruler of Laire, the invented kingdom that meets for swordplay and such in a lot across the street from a fast-food joint called the Burger Hole. (The potentate's name is King Argotron, and he's played by the ever-so-dry Ken Jeong.)

The misadventures that these four mismatched Musketeers stumble into are amusing enough. But "Role Models" -- directed by David Wain and written by Wain and Rudd -- isn't as uproarious as it pretends to be. The foul language, the constant repetition of words like the aforementioned "boobies" -- look, they've even got me doing it -- doesn't feel daring or cathartic, only canned. Even Jane Lynch (a veteran of the wonderful Christopher Guest movies "Best in Show" and "A Mighty Wind"), who appears as a ball-busting Sturdy Wings coordinator, just seems to be going through the motions of what she does best -- essentially, ball-busting. And even though she does it well, everything feels a little too much like business as usual.

A similar specter of averageness hovers over the whole movie: The over-the-top raunchiness of "Role Models" is now so commonplace that it ceases to register as being funny. In fact, the best parts of the movie are the ones in which the actors aren't working at all to be outrageous. Rudd, in particular, is lots of fun when he puts his almost mystically deadpan line delivery to work. His character tells Augie, with typical Rudd understatement, "People tend to avoid people in capes." In the end, "Role Models" is an essentially sweet picture -- one with swear words -- about two guys who find the best in themselves by helping others. But it's more conventional than it is dissolute -- the equivalent of trying to sneak an issue of Newsweek into the house, rolled up inside a copy of Mad magazine.