This corny comedy features Bernie Mac in one of his final roles -- and reminds us of how much we've lost. 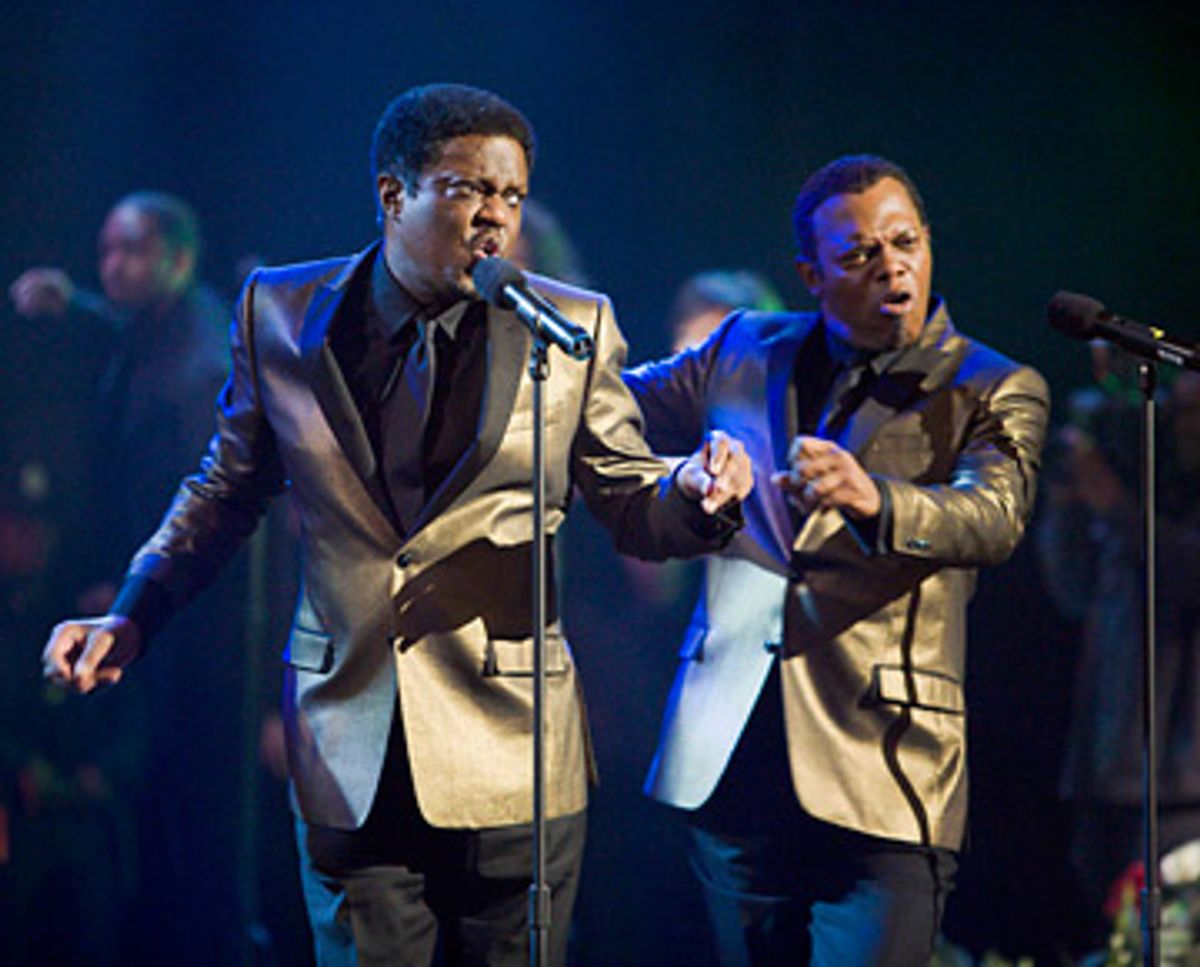 The only good reason to see the otherwise dismal comedy "Soul Men" is to have a look at the late actor and comedian Bernie Mac in one of his final screen roles. "Soul Men" was directed by Malcolm D. Lee, whose credits include the wonderful 2002 blaxploitation farce "Undercover Brother," a buoyant, smart picture with a sharp sense of style. But "Soul Men" couldn't be more unhip -- it just never hits the groove. Mac and Samuel L. Jackson play Floyd Henderson and Louis Hinds, two-thirds of a 1960s soul trio. The group's lead singer, Marcus Hooks (John Legend), long ago splintered off to build an enormously successful solo career. Floyd and Louis, after struggling along as a duo for years, eventually went their separate ways, too, and their bitter breakup was the beginning of a decades-long estrangement.

But when Marcus dies suddenly, Floyd and Louis have a chance to reunite. Floyd is bored, having retired from a successful car-wash business, and he wouldn't mind making some extra money; Louis, who's scraping together a living as a mechanic (and who also has a criminal record), has no interest in reuniting, but nevertheless allows himself to be lured into Floyd's scheme. The two set off in Floyd's green El Dorado (the license plate reads MUTHASHP), leaving Los Angeles for New York, where they're set to perform at a memorial show at the Apollo Theater. Somewhere along the way, the proverbial hatchet will have to be buried -- preferably not in anyone's head.

But before that happens, writers Robert Ramsey and Matthew Stone treat us to plenty of rectal-exam and Viagra jokes, gags about older women who don't look so hot (poor Jennifer Coolidge, in a small role, is shot from the most unflattering angles possible), and tired one-liners about ill-fitting old clothes. "Man, we sure are lucky I kept these threads," Floyd says after the two have packed themselves into some flashy, tight '70s stagewear, and before you can say "Midnight Train to Georgia," seams start splitting and buttons start popping. Almost nothing in "Soul Men" feels fresh or original, which isn't the worst sin. But even its recycling of old, familiar ideas comes off as tired and listless, as if no one involved in the enterprise could find a way to breathe any life into them. Jackson and Mac probably had an OK time making "Soul Men," but there's no crackling chemistry between them. Isaac Hayes, whom we also lost recently, appears in a tiny role; with that deep, satiny speaking voice, he brings a little class to the joint, but he's fighting a losing battle.

"Soul Men" isn't the last we'll see of Bernie Mac: Before his death, this past August, he'd completed shooting "Old Dogs" (a sequel to "Wild Hogs"), and he's one of the voices in "Madagascar: Escape 2 Africa." And even in the service of subpar material like "Soul Men," he's still good enough to remind us what we've lost. Mac could always deliver a line in a way that seemed laid-back and casual. But he knew how to sharpen the edges of his gags just slightly -- his unwillingness to suffer bullshit was always part of his charm.

"Soul Men" isn't a fitting goodbye for Mac. A better way to honor him would be to have another look at Charles Stone III's terrific, bracingly adult 2004 comedy "Mr. 3000," in which he stars as a pro ballplayer with a bad attitude. It's a shame Mac didn't have a more solid career in movies, but at least he found his share of success on TV. And in "Soul Men," often dressed in dapper, fluid trousers and crisp fedoras, he looks so handsome, and so vital, that it's hard to believe he's gone.