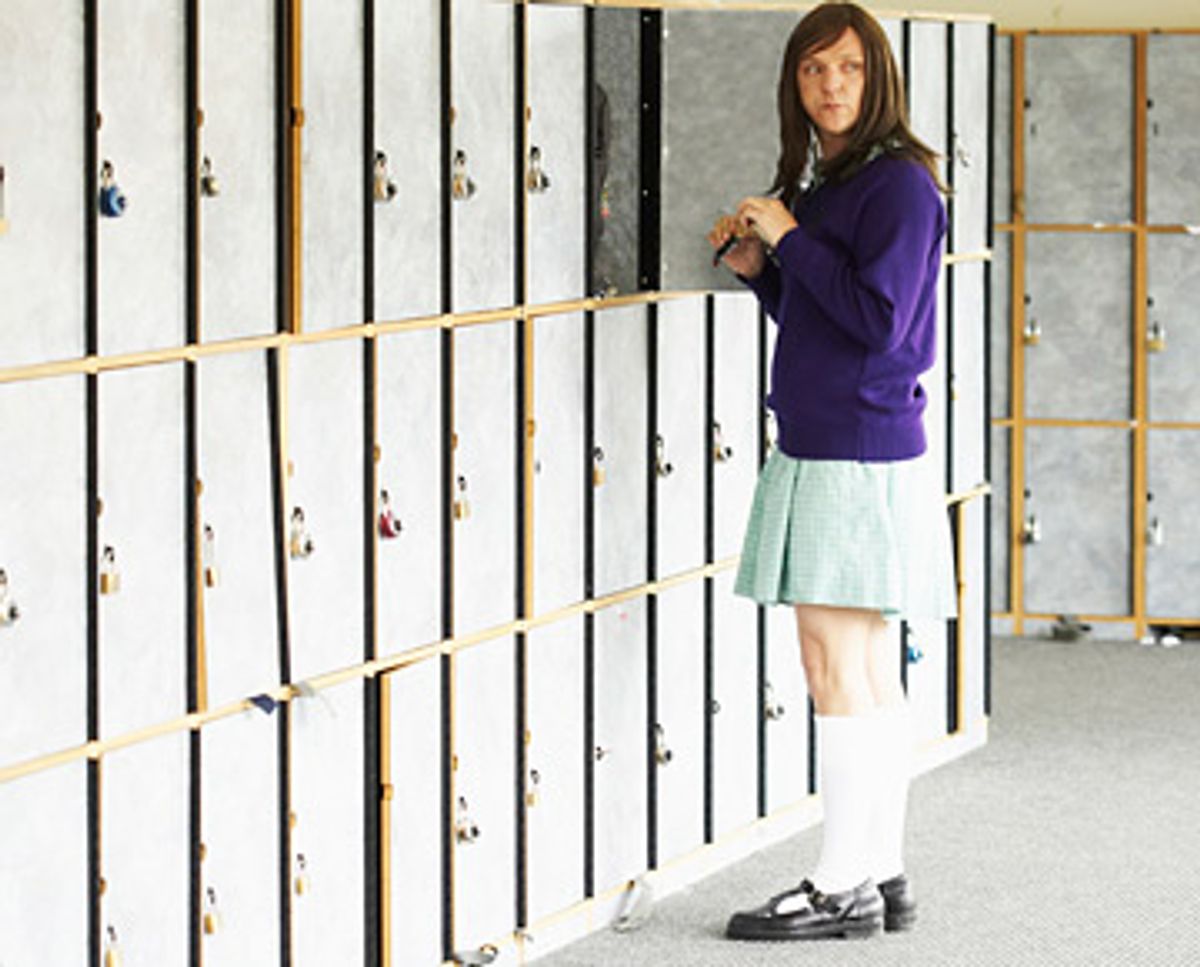 The small pond of high school is often filled with the most odd, colorful, unhinged fish you'll come across in your lifetime. Bizarre tics and antisocial traits that might get you ostracized, dumped, fired from a job or excommunicated in any other setting somehow thrive in high school's murky, provincial waters.

Ja'mie (pronounced Ja-MAY) perfectly embodies the know-it-all ignorance of the privileged popular girl in high school, from her faux-Valley Girl accent to her ridiculous knack for spewing a steady stream of empty non sequiturs. As she tours the sunny outdoor area of her new school (she's an "exchange student" from a private school, intent on spreading her wisdom with her new inferior, suburban, public school friends), she exclaims, "Oh my god, it's so kinda like not shady!" and "Oh, you've got wheelchair people. It's so cute!" and finally, "God, public schools are so random!"

It's hard to believe Lilley also plays the part of Jonah Takalua, the bad seed who disrupts every classroom and drives teachers out of their minds with his steady flow of back talk. He grumbles, whines, swears, makes excuses and leaves obscene graffiti everywhere. But like the most stubborn cases, he leaves the teachers feeling powerless, questioning just how many times they can send the same kid to the principal's office. Alternately grouchy and giddy, Jonah stumbles into bad behavior with that familiar blend of aggression and ambivalent moodiness we've all witnessed in troubled kids from our pasts. This isn't the stereotypical class bully, it's the mopey kid who's looking for new ways to keep the drudgery of school from boring him out of his mind.

Lilley captures Jonah's mumbling bravado perfectly, and demonstrates that no matter what the teachers do, Jonah has the upper hand. "Oh, Miss, you farted!" Jonah gasps, shocked, as his teacher is standing over his desk. When she makes him leave the room, he responds, "I don't want to go to time out! It's not my fault you farted!"

"Teachers at this school are so racist," he explains to the camera. "They're always blaming me for shit. If anything ever happens in school, teachers go, 'Jonah, he must've done it.' If shit goes missing, or any kids are crying or some shit, they go, 'Jonah must've done some shit.'"

The teachers don't seem all that racist -- except when they're trying not to seem racist. The principal brags about a program called Polynesian Pathways. "We're offering alternative pathways in life to the Islander kids to help steer them away from the spiral of unemployment, crime and drug abuse," he explains.

"When is this shit over?" asks Jonah.

But the best -- and perhaps most familiar -- of Lilley's characters is drama teacher Mr. G, who has exactly the sort of outrageous, tyrannical urges of every high school drama or music teacher in the known universe.

"I tend to do the more modern or cutting-edge productions," Mr. G brags in the first episode as the camera pans across promotional posters for "Ian Thorpe: A Rock Musical," "Downloadin'," "You Can't Skate, Mate!" and "Ikea: The Musical."

"I write my own stuff, original musicals, I've had a bit of acclaim from that!" Mr. G points to his sweat shirt. "This is a big show I did last year, 'Tsunamarama,' which was about the Tsunami tragedy, set to the music of Bananarama."

After the current head of drama leaves school for a family emergency, Mr. G assumes her position as head of the department and immediately throws out "Anything Goes" to write a musical of his own, based on a Summer Heights student named Jessica who died of an ecstasy overdose earlier in the year.

The musical mostly seems to feature songs about what a slut Jessica was. Meanwhile, Mr. G gives himself a prominent role as a mentor to the poor girl (he's played by a hilarious little high school doppelgänger with a castrati's high-pitched warble), even though he never met the girl in real life.

In auditioning students for the musical, Mr. G does a psychological assessment on them, asking them questions like "Does Dad ever hit Mom?" and showing them a teddy bear and asking, "If you had to choose below or above belly button, which direction would you head?"

All of Lilley's characters are exaggerations, of course, but their behavior is rooted in the very relatable absurdity of high school life. High school girls do say things like, "When I meet girls, they're usually so threatened straightaway, right?" -- how many times have you heard lines just that stupid on "America's Next Top Model"? Class bullies are sort of moody, confused guys who can't help screwing with the slow-moving authority figures around them. And drama teachers do tend to range far and wide, unchecked by their beleaguered supervisors, and with so much power in their hands, their egos swell to bizarre and freakish proportions.

The only bad thing about "Summer Heights High" is that it makes a lot of American comedies look pathetically unoriginal and lackluster by comparison. If only some of these American TV writers had Mr. G as a teacher back in high school. After telling a bunch of students that they didn't make the musical, he says to the camera, "I think for some kids, it's better that they know now than find out later in life that they've got no talent."