Voters want you to go big and go liberal -- and not channel Clinton-style incrementalism. 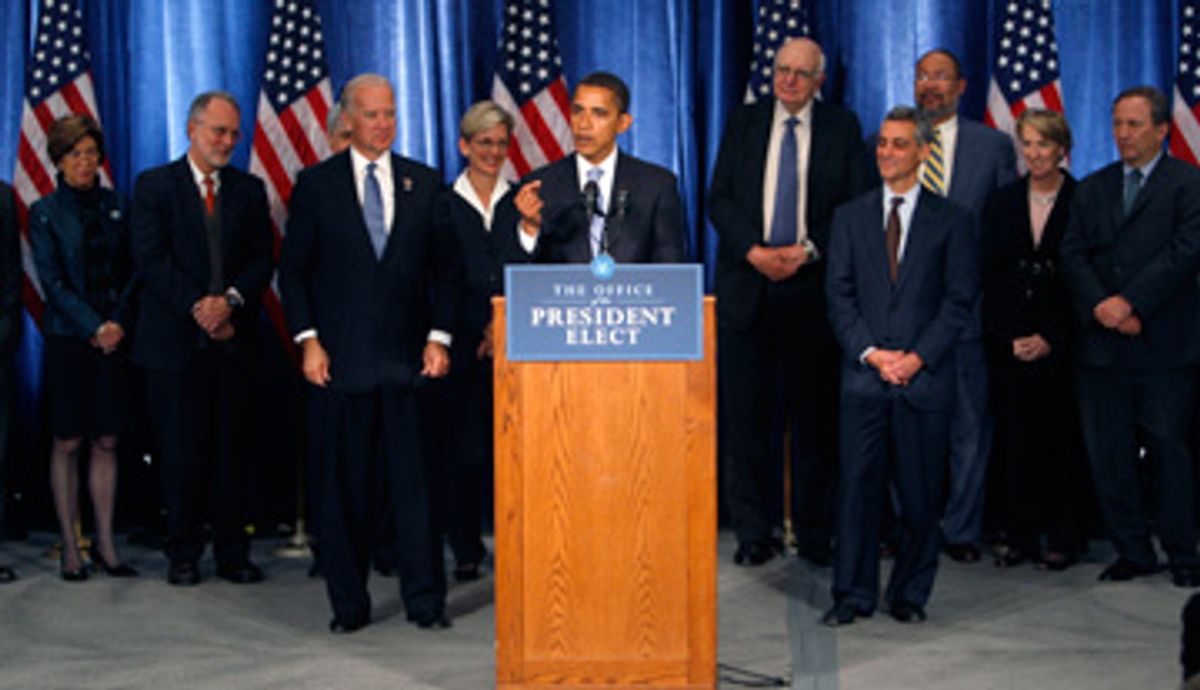 That's the question Bill McKay ponders in the classic movie “The Candidate” after he wins office promising "a better way." America will now ask Democrats the same haunting query following the historic election.

These are heady times for the party of Jefferson, Roosevelt and Obama. Only a few years ago, Democrats were almost relegated to permanent minority status by a Mission Accomplished sign and a flight suit. But since President Bush's 2004 reelection, they gained at least 50 House seats, 12 Senate seats, seven state legislatures and seven governorships. As Republicans used "socialism" attacks to make the election a referendum on conservatism, Democrats also registered their biggest presidential triumph since 1964.

So, while the president-elect talks of forming a bipartisan Cabinet, his victory wasn't the public's cry for milquetoast government by blue-ribbon commission. As Deepak Bhargava of the Center for Community Change says, Obama's win was an ideological mandate presenting "an opening for transformational, progressive change."

Maximizing this opportunity relies on Democrats understanding the parable from Spider-Man comics -- the one about great power coming with "great responsibility." In politics, that latter phrase is a euphemism for high expectations.

What the party gains in strength, it loses in a Republican scapegoat that previously justified inaction. On huge issues -- whether re-regulating Wall Street, reforming trade, solving the healthcare emergency, or ending the Iraq war -- America envisages enormous progress in the months ahead, and Democrats will have no one to blame for failure but themselves. After all, with more than 360 electoral votes, President Obama cannot credibly claim he lacks the political capital to legislatively steamroll a humiliated GOP and its remaining senators. The same goes for Democrats everywhere. Meeting expectations requires championing far-reaching -- even radical -- initiatives.

That was always 2008's theme. Amid lipsticked pigs, Joe the Plumber and Super Bowl-size candidate events, the election became a choice between continued conservative rule and a progressive agenda as far-reaching as the current crises. And as the defeated John McCain said, "The American people have spoken, and they have spoken clearly."

To meet the challenge, Democrats have to abandon their worst habits.

They must, for instance, acknowledge their progressive mandate, rather than denying it as Senate Majority Leader Harry Reid did on Tuesday. "This is not a mandate for a political party or an ideology," he fearfully told reporters.

They should also retire the Innocent Bystander fable about being powerless onlookers. Democrats first cited this myth as reason the Iraq war continued during their congressional majority -- expecting the country to forget that Congress can halt war funding. Today, Sen. Chuck Schumer, D-N.Y., said that "there's not much we can do" to amend the sputtering bank bailout. In 2009, such mendacity will metastasize from banal dishonesty into grist for scathing comedy-show punch lines.

Democrats need to discard other lies, too -- especially those about Bill Clinton. To hear the pundits tell it, Clinton's first-term pitfalls underscore why the next administration should avoid "governing in a way that is, or seems, skewed to the left," as the Washington Post's Ruth Marcus most recently asserted. History, of course, proves the opposite. Recounting Clinton's early years to Politico, a lobbyist correctly noted that the new president didn't move left -- he pushed conservative policies like NAFTA, thereby demoralizing his base and helping Republicans take Congress.

Obama rose on a promise to eschew those triangulations, and he won because America realized invertebracy and sail trimming will not solve problems. Voters rejected Clinton-style incrementalism in the primary, then scorned conservatism in the general election, meaning that the Democrats' best response to Bill McKay's "What do we do now?" question is a two-word answer: Go big.

That is not merely the better way -- it is the only way.