How did that realignment work out for you, Republicans?

Five years ago, overweening conservatives predicted they would dominate the future. Goodbye to all that -- for now. 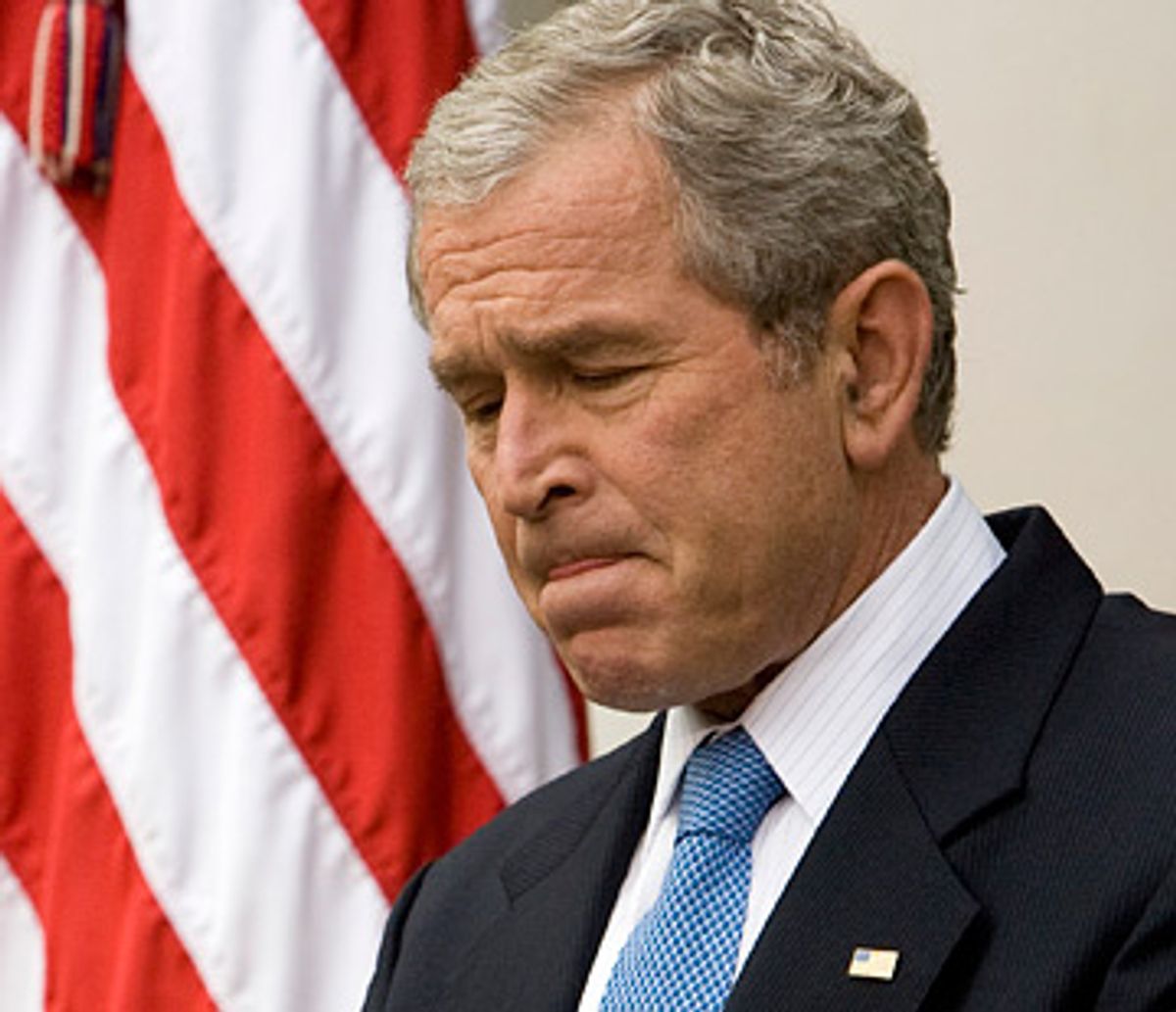 Five years ago the Republican Party and the conservative movement thought they were poised to monopolize power in America well beyond the political horizon. Epitomizing their hubris in those dark days was Grover Norquist, the conservative leader who liked to say that "the Republicans are looking at decades of dominance in the House and the Senate" and of maintaining regular control over the White House as well. Few commentators, pollsters or political scientists tried to quarrel with these confident prophecies from the right.

With the publication of "The Emerging Democratic Majority" in the late summer of 2002, however, John Judis and Ruy Teixeira spoke out directly against that consensus. (I'm happy to have recommended it as that autumn's most important book.) In that pathbreaking work (and on a Web site later christened Donkey Rising, which is now Democratic Strategist) they used a sharp combination of statistical research and political theory to undermine the assumptions behind a permanent right-wing ascendancy -- and to predict the rise of a progressive majority encompassing young people, women, ethnic minorities and professional workers.

This week marks their turn to claim the future (and that is what Judis does here). Following the first major rumblings of the leftward shift during the 2006 midterm elections -- which might just have been a normal response to a lousy president in his second term -- they have now seen the flowering of the coalition they imagined at the zenith of the Bush regime.

Election maps and exit poll data both suggest that this year's Democratic victories were grounded in that coalition. In the cities that Judis and Teixeira dubbed "ideopolises," those postindustrial metropolitan areas where tolerance and creativity rule, from Colorado in the Mountain West to Virginia and North Carolina in the Southeast, the Democrats displayed new and growing appeal. White voters with a college education used to vote Republican and still do, but the trend is in the opposite direction. Barack Obama cut George W. Bush's margin among this group from 11 percent to 4 percent, according to Tuesday's exit polls, and he won white voters with postgraduate degrees by a margin of 10 points.

Still more troubling for the Republicans is that the ideology of the ideopolis now seems to extend into the surrounding suburban areas, where the Democrats cut deep into traditionally Republican counties, racking up victories in places they have not won for decades. The same population groups that tend to be loyal Democrats have moved into those counties, contesting local elections that used to feature token opposition at best.

Meanwhile, the Republican coalition, if it still deserves that description, is increasingly constricted, with little space for growth. Not only is the GOP's power largely confined to the South, but the party's complexion displays an unhealthy pallor.

It is, in a word, white -- in an era when America is becoming more diverse, colorful and multiethnic. Nine out of 10 McCain voters were white, in fact, while the supporters of Obama had that more fashionable rainbow look: Out of 10, six were white, two or three were black, one was Hispanic, and the rest were Asian or "other" (perhaps biracial, like the president-elect himself).

Of course, Obama's sweep of African-American voters is hardly surprising. They have been the most reliably Democratic part of the voting population for nearly 80 years. But he also drew two-thirds of Hispanic voters as well, improving on the record of Democrats in the past two presidential elections and his own record in the primaries. Those groups represent the demographic future -- and the Republicans so far have no prospects or plans as the nation enters a period of ethnic change.

Equally ominous for the Republicans is the powerful Democratic preference of young voters, now expressed forcefully for the third national election in a row. Many political scientists believe that adult voting patterns tend to be established before age 30, which if true could lock in a new generation of Democrats. Again, it is not surprising that young minority voters supported Obama or chose Democratic candidates down-ticket, but they attracted a big majority of young white voters as well. Obama defeated John McCain by 10 points in that group, contributing heavily to the overall 2-to-1 Democratic margin among voters under 30.

Thanks in no small degree to the incompetence and corruption of the Republicans who have held power over the past decade or so, almost 40 percent of voters now call themselves Democrats. But just as important is the diminishing burden attached to the "liberal" label, which has been used to such great effect against Democrats over the past three decades.

Perhaps the most revealing post-election data on that question came from within the defeated McCain campaign. In an interview with Roger Simon of Politico, the Republican candidate's speechwriter and friend, Mark Salter, disclosed that in the campaign's own internal polling data, 60 percent of Americans regarded Obama as "liberal." The campaign thought that would be enough to defeat him, which is why it hammered on the "left-wing" themes.

Baiting the liberals didn't work this year. Disgusted with the Republican right, voters wanted something different and weren't afraid to look leftward. That is what "realignment" means.

But gloating only goes so far, as Norquist learned the hard way. On Thursday morning, he joined dozens of right-wing leaders in Washington to plan for a conservative comeback -- and what they hope will be the next realignment, without the burden of George W. Bush. Don't misunderestimate them.