Salon catches up with some of the also-rans, has-beens and future standouts from the 2008 election cycle. 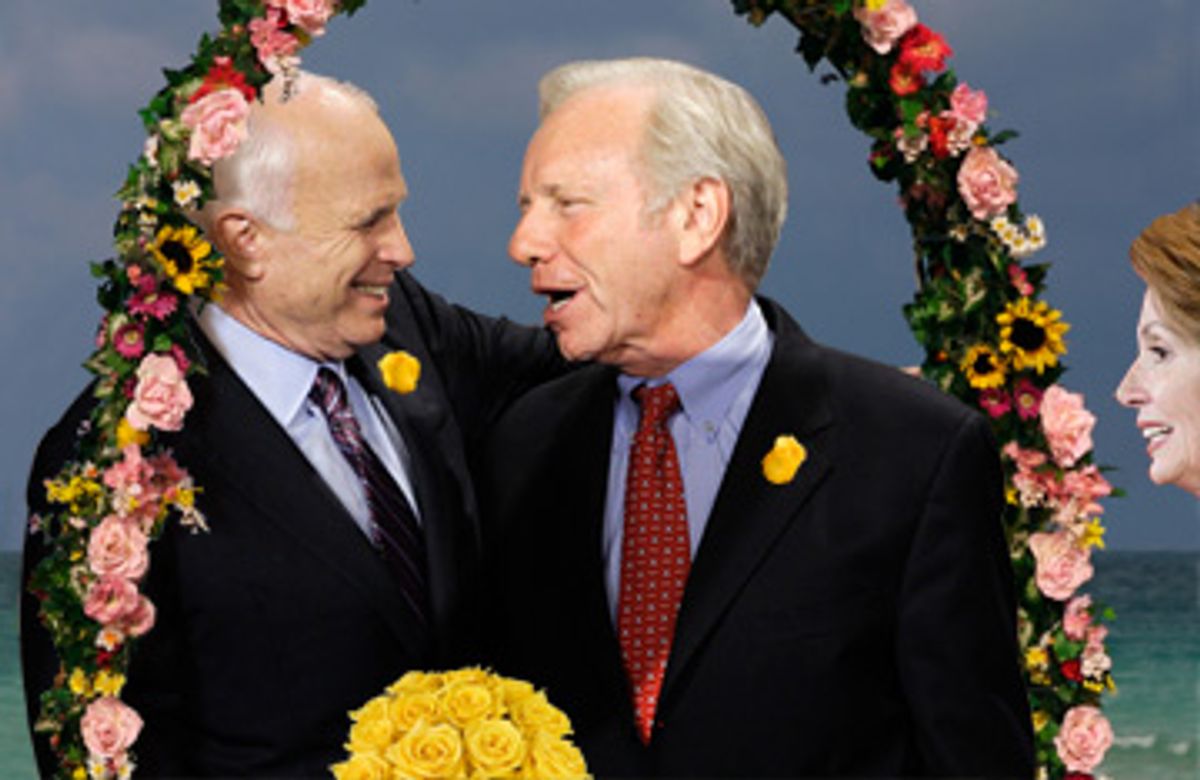 Sarah Palin appointed herself leader of a rebel faction of the Republican Party, exchanged her signature up-do for side buns, and now tours the country, appearing at state fairs as a CNN hologram and imploring, "Help me, Karl Rove, you're my only hope," to wildly enthusiastic crowds. She is a spokesmodel for Neiman Marcus.

Bill Clinton accepted an invitation to dine with the Obama family at the White House in early 2009 and refused to leave. He spends his afternoons at the kitchen table, talking to Sasha, Malia and the Obama puppy about micro-credit.

Joe the Plumber changed his name and unseated Todd Palin as snow machine champion of the world. He is studying for his plumbing license, but still refuses to fix the leaky sink.

Larry Johnson finally revealed the "whitey" tape. He was informed that it is actually a bootleg copy of "Coffy," starring Pam Grier. He blamed Lady Lynn Forester de Rothschild for "poor research skills."

John Edwards guards the castle at Isengard and hopes one day to run for president of Mordor.

After watching both of her older sisters go through with unwanted pregnancies and get married off as teens, Piper Palin attended Wellesley College and Harvard Law School, before returning to her violent, bankrupt hometown of Wasilla as a community organizer. Piper became the first female vice president of the United States in 2045.

As the secretary of the newly created Department of Intergalactic Peace, Dennis Kucinich became a valued member of Barack Obama's "Special Cabinet." He still supports gay marriage, getting out of Iraq, and saving the planet, just like you do.

Bill Ayers played a leading but secret role advising the Obamas on the choice of a puppy for their daughters.

A lovesick Rich Lowry followed Sarah Palin to Alaska, challenged First Dude Todd Palin to a duel over his wife, and wound up in a Wasilla hospital with a serious head injury. He woke up singing will.i.am's "Yes We Can," headed to Chicago, and began stalking leaders of the Obama transition trying to get a job.

After his loss to Barack Obama, John McCain wrote three best-selling tell-all books apologizing for abandoning his principles and dedicated his life to overturning Proposition 8. In a barefoot service on the beach at Malibu officiated by Gov. Arnold Schwarzenegger, and witnessed by Nancy Pelosi, McCain married Joe Lieberman. A year later, the major motion picture "Maverick Hearts," based on the McCain-Leiberman love story, won the best picture Oscar, along with a shared best actor prize for its stars, Clint Eastwood and Wallace Shawn.

Mike Huckabee and Chuck Norris led an armed insurrection in late 2011, securing territory in Des Moines and other key Iowa cities. They were captured and imprisoned by Blackwater commandos hired by Mitt Romney.

Shortly after the 2008 election, Bill Kristol began quietly lobbying members of the conservative intelligentsia to check out this Harriet Christian lady, because she is "going places."

Rudy Giuliani ran for Senate in New York in 2010. Following the advice of his mostly non-English-speaking Hungarian campaign staff, he decided it was not important to campaign in Albany, Poughkeepsie, Buffalo or Staten Island during the Republican primary, and was stunned when he was beaten soundly by underfunded opponent Willie Randolph. He retired to a gated community in Florida, where he spends his days mumbling, "Nine-eleven, nine-eleven."

Keith Olbermann is currently serving a seven-year prison sentence for accosting an 80-year-old on a New York street and shouting, "Suspend your campaign!" at her.

Kathryn Jean Lopez is in the bushes outside Mitt Romney's house.

Mitt Romney tied the dog to the roof and headed to Disney World.

Cindy McCain returned to her charity work. And her home planet.

Vicki Iseman is still not sleeping with John McCain.

Ron Paul lives in a bunker made entirely of "Ron Paul" signs.

Elwyn Tinklenberg used the $100 billion he raised in his unsuccessful race against Michelle Bachmann to fund research into whether or not Bachmann is a real American.

Hillary Clinton received wide acclaim for her rhyming musical slide show about the importance of universal healthcare. She won an Oscar, an Emmy and a Tony for it. She is raising money for her 2016 presidential run.

Mark Penn was hired to coach the New York Mets.

Steve Schmidt was hired to coach the New York Liberty.

Randy Scheunemann is helping the government of Iran win admission to NATO.

Ted Stevens is a senator from Alaska.

George W. Bush is totally more awesomely happy than he has ever been in his whole entire life.