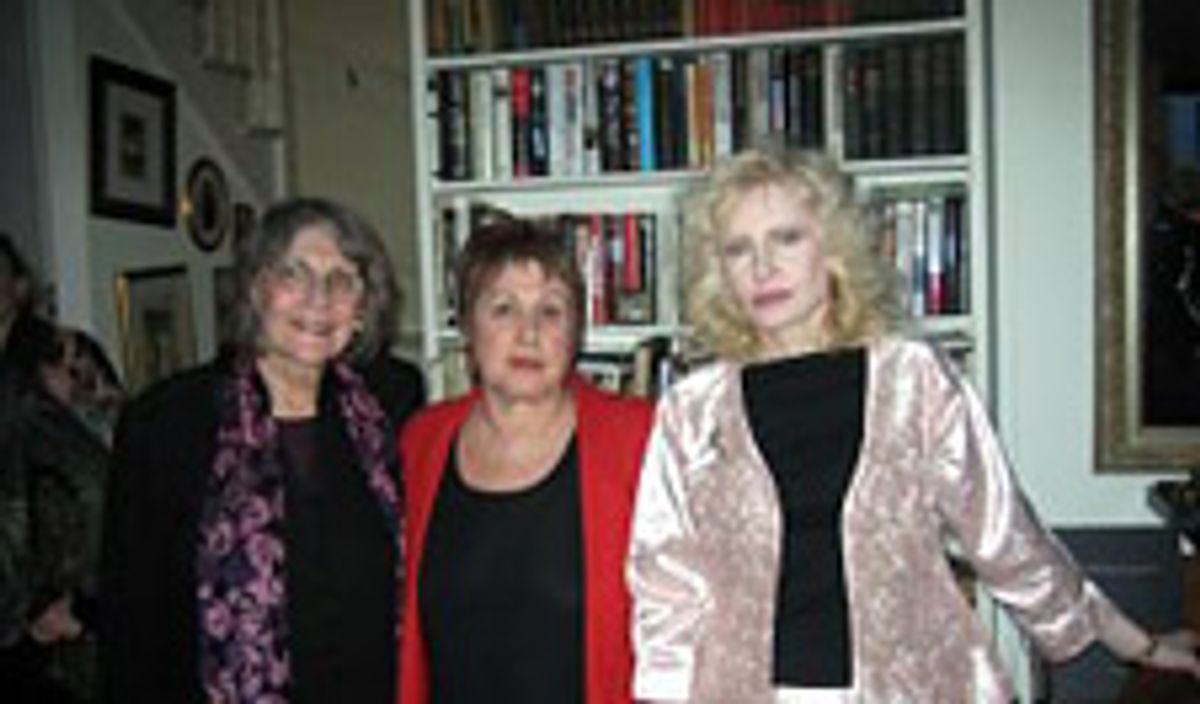 My late friend Babz, aka Barbara Seaman, who died of lung cancer on Feb. 27, 2008, would have loved the glamorous setting: The National Women's Health Network, which Barbara co-founded in 1976, had chosen lawyer Sybil Shainwald's Fifth Avenue apartment in which to give out the first awards in Barbara’s name. I was also a co-founder, but the network was really Barbara's baby. She grew it, her issues became the network's issues, and she personally encouraged and mentored the next generation of feminist healthcare activists.

Barbara always said that the "women's health movement was the healthiest -- maybe the only healthy -- branch of feminism." What she meant was that the trashing, betrayals and bitter battles galore that ground down so many other second- and even third-wave feminist activists (not to mention their embattled issues) did not quite happen among the health activists.

When Barbara first came on the scene, women were still being tranquilized by their physicians for the smallest complaint or for no reason at all, and women were taking birth control pills that would give them cancer, heart disease, diabetes, blood clots and strokes. Barbara changed all that, first by publishing her 1969 book "The Doctors Case Against the Pill" and then by insisting upon congressional hearings in 1970. The U.S. Senate did not allow women to testify about the Pill. In protest, women disrupted the hearings. Thereafter, birth control pills carried warning labels.

However, the drug companies found an easy way to punish Barbara. They refused to advertise in womens' magazines (Ladies Home Journal, Family Circle) that carried Barbara's work. This censorship hit her hard, and she almost always mentioned it when we were together. However, it did not stop her.

Barbara would go on to write many more books in the area of women's health: "Women and the Crisis in Sex Hormones" (1977); "For Women Only! Your Guide to Health Empowerment" (2000); and "The Greatest Experiment Ever Performed on Women: Exploding the Estrogen Myth" (2003). Her last book, published posthumously, with coauthor Laura Eldridge, is "Body Politic: Dispatches From the Women's Health Revolution" (2008).

But Barbara also envisioned a network that would function as a permanent "watchdog" on behalf of women's reproductive health. And so she created one, and it has lasted for 33 years. Now, only eight months after Barbara's death, this network was honoring her.

I came into the gathering with my dear friend Shere Hite (author of the influential "Hite Report" and many other books.) Shere, who lives in Europe, and I have now vowed, in Barbara's name, to spend more time together. In a sense, Barbara has bequeathed us to each other. Shere was here to accompany a friend who was working on the Obama campaign.

So, there we all were, veteran feminist health activists of all ages, in that 15th-floor Fifth Avenue apartment with views of Central Park. We were partying above the verdant green tree tops in a tastefully decorated adult treehouse decorated in muted colors and with Picassos on the walls. As I said: Barbara would have loved it. She was so at home in well-appointed, do-gooder settings -- perhaps a necessary consolation for a life devoted to the kind of muckraking that leads to particular punishments.

Sybil, by the way, has been chairwoman of the board of the National Women's Health Network and was the nation's go-to lawyer for diethylstilbestrol (DES) litigation. Sybil was co-counsel in the first DES daughter case, Bichler v. Lilly, and has written, testified and lectured about obstetrical malpractice, unnecessary hysterectomies and product liability litigation.

When I asked Sybil to remember Barbara for this article, she said, "It was Barbara who prevented so many injuries to women through her writings and speeches. I always called Barbara the 'Grover Whalen' of the women's health movement. She was the official greeter and supporter for all of her many, many feminist friends."

The assembled physicians, lawyers, authors, activists, professors, politicians and foundation heads assembled were nothing short of feminist royalty: Ninia Baehr, author of "Abortion Without Apology"; Rebecca Chalker, author of "A Woman's Book of Choices: Abortion, Menstrual Extraction, RU-486"; Laura Eldridge, who coauthored a book with Barbara, the recently published "The No-Nonsense Guide to Menopause"; Susan Love, the breast cancer surgeon and author of "Dr. Susan Love's Breast Book"; Susan Wood, the former head of the FDA's Office on Women's Health; and many other wonderful women (and some men!) of all ages.

Cindy Pearson, the director of the network, gave out the two awards. One went to lawyer Lynn Paltrow, the executive director of National Advocates for Pregnant Women, for her important work on behalf of the civil rights of pregnant women; the other went to AIDS activist Gina Arias of Housing Works.  Arias is working to defeat the twin plagues of homelessness and AIDS, a disease that now afflicts many minority women.

Paltrow, a longtime civil and reproductive rights lawyer, pointed out that when women become pregnant they increasingly lose their civil rights. For example, "Relying on fetal rights arguments, authorities in Utah arrested a woman for murder because she delayed a C-section causing, the state alleged, the stillbirth of one of her twins."

According to Paltrow, other women have also been charged with homicide because they took illegal drugs that the state alleged caused stillbirths.

"Recently, a unanimous South Carolina Supreme Court had to overturn Regina McKnight's conviction for homicide by [cocaine] child abuse. After Ms. McKnight had served more than eight years in prison, the court finally recognized that her conviction had been based on 'outdated' research and that her trial counsel had failed to call experts who would have testified about 'recent studies showing that cocaine is no more harmful to a fetus than nicotine use, poor nutrition, lack of prenatal care, or other conditions commonly associated with the urban poor.'"

When I asked Cindy Pearson at the reception what she thinks the network has accomplished, she said, "I was struck by how far the movement has come. Barbara clamored for women's questions about their health to be taken seriously -- by clinicians and by researchers. She and her allies have accomplished that and much more. There are no more quotas on women in medical school, no more bans on loved ones in the delivery room, contraceptives are much safer, patients have the right to written information about the drugs they've been prescribed, and there are literally hundreds of studies under way researching important women's health issues.

"And yet, as I looked around the apartment and recognized so many leaders and she-ros of the women's health movement, I was also struck by how far we still have to go. When Barbara, Belita [Cowan], Alice [Wolfson], Mary [Howell] and you founded the network, you described the goal 'to work for a health care system more appropriate for women as consumers and providers.' How I wish that healthcare system existed! We all know how far we are from a system that includes everyone, treats patients with respect and caring and is supportive of the humanity of clinicians."

What is Cindy talking about? For starters: Women still pay higher premiums for healthcare coverage than men do. Combine that with lower earnings and you have women at greater healthcare risk simply because they are women. And estrogen is not the only drug that bears close watching.

For example, the network is currently involved in a campaign about the drug Lupron, which is used to kill prostate cancer. Lupron has also been prescribed to treat women with endometriosis and fibroids and to aid assisted reproduction procedures. But it apparently also has devastating and disabling effects on women, such as headache, migraine, dizziness and severe joint, muscular and bone pain. It can also cause an early onset of menopause and a rapid and significant loss of bone density. A number of women so affected began contacting the network to describe these fairly alarming symptoms. And now the network has launched a public education and policy campaign to inform women about the dangers and misuse of Lupron.

Cindy told me that the network's "lofty" goals are "to ensure that women have self-determination in all aspects of their reproductive and sexual health, to create a cultural and medical shift in how menopause is currently perceived and addressed and to help establish universal healthcare that meets the needs of diverse women."

Barbara Seaman shocked me several times. First, when she took me to my first facial at Georgette Klinger's. I had not realized that a feminist leader was "allowed" to do this. (Please understand, this was in 1970-71, and I was very naive.) She shocked me again, and even more so, when, years later, she asked me to testify on her behalf about being battered by her third husband. I agreed to do so, but that meant I had to sit with her and hear all the details. They were agonizing. What shocked me was that one of our own, a leader, armed with feminist savvy, was still so vulnerable. Her death shocked me the most because I had not realized how much she meant to me, and how good a friend she really was.

So there we were, a lifetime away from when we first started out, toasting Barbara's work in Sybil's apartment, congratulating the awardees. Then someone said: "What a shame that Barbara cannot be here." I said, "But I think she is here," and everyone laughed and loved the idea that Barbara is, indeed, living on through her work and through us, her friends and her family.

Dr. Phyllis Chesler is an Emerita Professor of Psychology and Women's Studies and the author of 13 books including the landmark "Women and Madness." She is a co-founder of the Association for Women in Psychology and the National Women's Health Network. Her website is www.phyllis-chesler.com.