This magical French film captures the way people sometimes feel the most lost within the context of their own families. 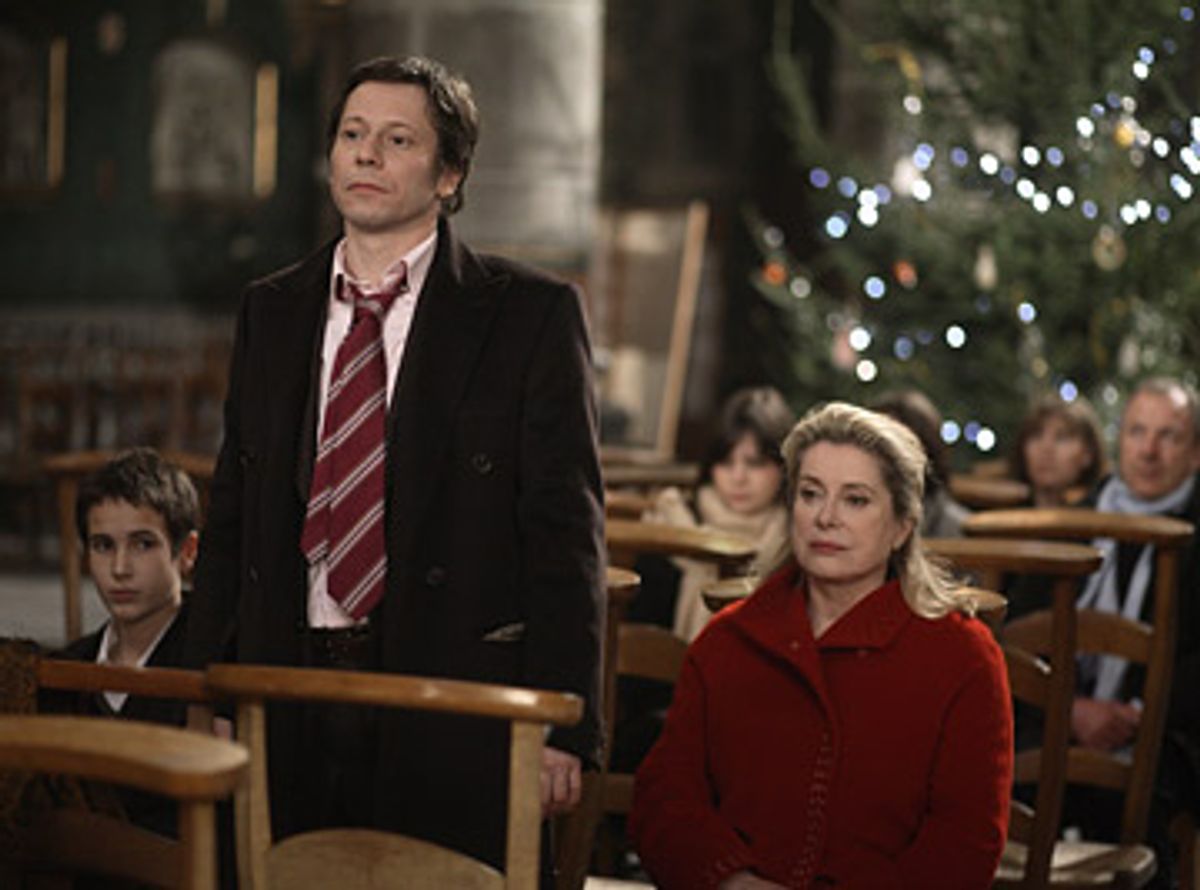 I can think of no other filmmaker who simultaneously bewilders and moves me in the way French director Arnaud Desplechin does. As I watched his latest picture, "A Christmas Tale" -- its French title is "Un conte de Noël" -- I felt the same degree of wariness and trepidation as I did watching his previous feature, the equally wondrous "Kings and Queen" (2005): Am I really understanding what's going on with these characters? Is any of this really connecting? Only to realize, in the seemingly uneventful thunderclap of the last sequence, that everything has come together with perfect clarity -- and that I want to burst into tears.

I've seen "A Christmas Tale" twice now, and both times, I had the same response to the ending. But I'm no closer to understanding how Desplechin works his weird magic. "A Christmas Tale" is the story of a family, and of the neuroses and resentments that vibrate within this not-so-comfortable familial cocoon. The movie opens with a narrator outlining the family back story, illustrated with quaint silhouettes that could have been lifted from a 1920s children's storybook: In the early 1960s a young couple, Abel and Junon Vuillard, give birth to two children, Joseph and Elizabeth. Joseph has a rare genetic condition, and only a bone marrow transplant can save him. But Abel and Junon, as well as Elizabeth, are incompatible. And so the couple conceive a third child, Henri -- but his marrow doesn't match, either. Joseph dies at age 7. The couple have a fourth child, Ivan. And as "A Christmas Tale" moves forward to the present day, we learn how each member of the Vuillard family has moved on, and away, from this initial seed of loss and sorrow.

Elizabeth (Anne Consigny, who played the translator in last year's "The Diving Bell and the Butterfly") is a successful playwright, living in Paris. But for some reason -- one that's never explained -- her relationship with her brother Henri (Mathieu Amalric, the extraordinary actor who played the stroke victim, Jean-Dominique Bauby, in "Diving Bell," and who also gave a superb performance in "Kings and Queen") has hardened into hatred. When Henri goes bankrupt as the result of a bad business deal, Elizabeth agrees to bail him out, on one condition: He is to have no more contact with her, ever.

The Vuillard family goes along with this inexplicable banishment, and Henri essentially disappears from their lives. And then Junon (Catherine Deneuve) learns that she has leukemia, the disease that took her firstborn son. And so she and her husband, Abel (the ebullient and charming Jean-Paul Roussillon), look for a suitable bone-marrow donor within the family's ranks -- at around the same time that they attempt to gather this splintered group for Christmas.

Even discounting the conflict between Henri and Elizabeth, this group is more disparate and sprawling than you can imagine: There's also Ivan (Melvil Poupaud, the appealing, doe-eyed actor who played Parker Posey's suitor in 2007's "Broken English"), the youngest Vuillard, who's married to the luscious Sylvia (Chiara Mastroianni, Deneuve's real-life daughter); together, they have two adorably oddball sons. Simon (Laurent Capelluto), Junon's nephew -- the Vuillards took him in after the death of his own parents -- is also part of the gang; he's the one family member who has maintained close contact with everyone, including Henri. And, as he makes his reappearance within the family, the hard-drinking, unmanageable Henri has brought a girlfriend with him: Faunia (played by Emmanuelle Devos, the brunet goddess whom Desplechin often features in his movies), a mischievous faunette who views the tangled family proceedings with detached amusement. (On meeting Faunia, Sylvia decrees her a "bombshell," noting that "she has Angela Bassett's ass.")

We accept it as a given that Americans are an extremely neurotic bunch, more so than other people of the world, and plenty of our filmmakers -- from Woody Allen to, more recently, Noah Baumbach and Jonathan Demme -- have staked their reputation on our reputation as a nation of maladjusted misfits. But Desplechin (who wrote the movie's script with Emmanuel Bourdieu) doesn't treat neuroses and suffering as any kind of national trait. Maybe, in movies made in other countries, those neuroses aren't as obsessively explored as they are by the Americans. But they're no less potent, and the damage they can wreak, if they go unchecked for too long, is just as great. Desplechin navigates the rocky terrain of the Vuillard family reunion in a way that's funny and strange -- not wholly uplifting, but hardly depressing, either. His storytelling style is a layering of emotional textures: He lays out a large, potentially incomprehensible story in tattered pieces that somehow come together into an extraordinary whole. Desplechin will try just about anything: Sometimes his characters address the camera squarely, in distressingly direct monologues that almost make you want to turn away.

But the painful, wonderful, freeing truth that Desplechin gets at in "A Christmas Tale" (as he did in "Kings and Queen") is that sometimes people feel the most lost within the context of their own families -- the very context within which they should feel most at home. His conclusion? That it doesn't have to be the end of the world. And it doesn't have to preclude, or even cloud, familial love. In one of my favorite moments in "A Christmas Tale," the characters played by Deneuve and Amalric -- the former, a formidable actor; the latter, one whose eyes are elfin, uncomprehending, as if the world were a perpetual puzzle -- sit in the family's garden to share a smoke. (Ah, France!) "Still don't love me?" Amalric's Henri asks his mother. "I never did," she replies flatly, and the two move on from there, discussing Junon's coldness, and their nonlove for each other, in terms that can equal only the fiercest kind of love.

Earlier, Junon has spoken of Henri with the kind of critical detachment that mothers rarely use when talking about their children. After learning his bone marrow is a good match for hers, she says, "Henri comes from my womb. I'm taking back what's mine." Is that selfishness in her voice? Is it pride? Is it a freakish version of the possessiveness many mothers feel for their sons? It's hard to say. The Vuillards are not an easy family, and "A Christmas Tale" is not an easy movie. But by the end, what Desplechin has given us -- in his own inexplicable way, which is sometimes meandering and sometimes piercingly direct, and sometimes both at once -- is a benediction. He doesn't let us go without reassuring us, "You were lost but now are found."