Daniel Craig is the scrappiest Bond ever -- and the most soulful. 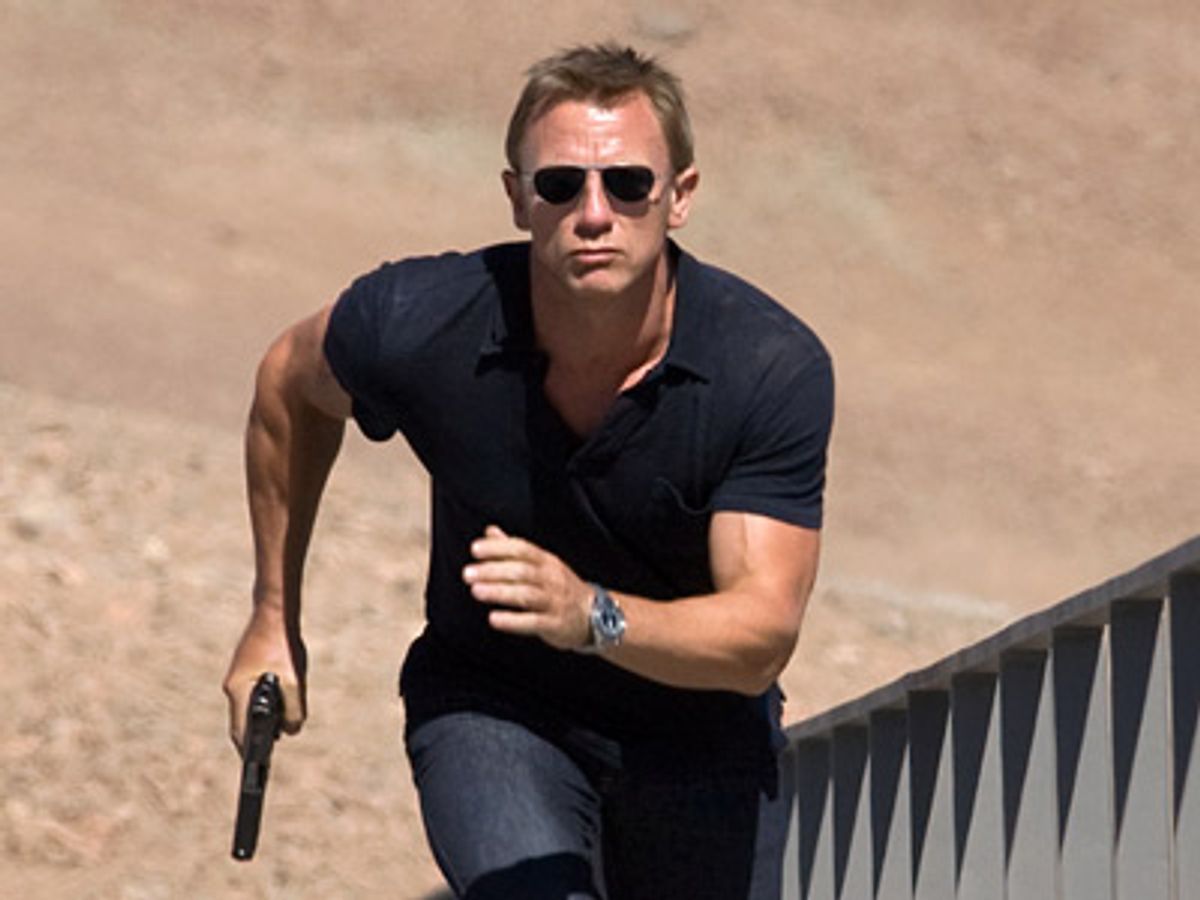 Daniel Craig's James Bond survives the opening scene of "Quantum of Solace" -- a car-chase sequence that's chopped up into so many jagged visual shards you could get hurt just by looking at it -- but he doesn't emerge unscathed. When we see him next, closed off in a chilly-looking stone chamber with Judi Dench's M and a few other agents, preparing to interrogate the prisoner he's just brought in, his street-fighter's mug is cut and battered, and even his eyes look spent. M has reminded him of the woman he loved and lost in the last Bond picture, the 2006 "Casino Royale"; she shows him a picture of that woman -- her name was Vesper Lynd, and she was played by Eva Green -- with her good-for-nothing Euro-villain boyfriend. Bond doesn't know if Vesper died for him or if she died in the midst of betraying him, which is why her image, thrust in front of him, unbidden, stings. He takes a swig from the glass of whiskey in his hand; his eyes are blue blanks that reveal nothing even as they say it all. When M isn't looking, he tucks the picture inside his jacket, a gesture that's too guarded to be sentimental, and yet Craig makes its very furtiveness seem somehow operatic. This Bond can, and does, take a beating; it's the emotional bruising that nearly kills him.

Craig is the scrappiest of all Bonds, but he's also the most tender. And "Quantum of Solace" is best when director Marc Forster allows his star the latitude to explore emotions that, until Craig stepped into the shoes of the character, we didn't know Bond had. In fact, "Quantum of Solace" contains one of the most moving sequences I've seen in any Bond movie -- including the devastating ending of "Casino Royale" -- an emotionally exquisite Pietà that's the kind of thing you get when you allow your actors to carry a scene quietly and instinctively.

"Quantum of Solace" is actually more successful as an actor's movie than an action movie: The story here -- the script is by Paul Haggis, Neil Purvis and Robert Wade -- is like a diamond broken into flaky little chips, rather than a pleasing whole set with polished gems. The action sequences are well conceived -- it's not a bad idea to set a chase-and-murder sequence against the climax of "Tosca," as Forster does here -- but almost all of them fall apart in the execution. Forster seems to think that fast cutting alone makes an action sequence exciting, and to that end he's ripped numerous pages out of the "Bourne" movies, only they're the wrong pages. The editing in the Bourne movies, no matter how fast it is, is always coherent. Forster, on the other hand, pays little attention to the space people occupy in the frame; in most cases it's impossible to know who's coming from where, and why, let alone what they think they're doing. And Forster is clumsy in other ways that are even more frustrating: He borrows one of the most enduring images of the Bond movies -- although this one has to do with black gold instead of the other kind -- and presents it so blandly that it means almost nothing visually. Talk about a waste of natural resources.

Forster is at least conscious that he's following a tradition here, and he shows some respect in mixing new elements with the old. But while Bond plots don't necessarily need to make sense, it's always more pleasurable to have one you can actually follow. "Quantum of Solace" features a plot that twists and turns but is essentially inconsequential: The terrific French actor Mathieu Amalric (who starred in last year's "The Diving Bell and the Butterfly," and who also appears in another picture opening in some cities this week, Arnaud Desplechin's "A Christmas Tale") plays Dominic Greene, a baddie who poses as an environmentalist so he can pull off crazy schemes, like causing a Bolivian drought that will allow him to barter a deal with a creepy exiled South American general (Joaquin Cosio). Greene is part of a network that's multi-tentacled and far-reaching, and Bond's pursuit of him may also help him untangle some of the secrets that Vesper took to the grave with her -- but piecing all of that together is something of a stretch, a task that Forster's filmmaking doesn't make any easier.

The greatest pleasures of "Quantum of Solace" come from watching the actors. Amalric makes a fine, subtle villain: He has the face and the carriage of a puppet who's just become a real live boy, eager to test the limits of what he can get away with. Olga Kurylenko plays Camille, a Bond girl who's so preoccupied with her own personal mission that she can't even be bothered to seduce the hero -- it's an interesting twist, and Kurylenko is self-possessed enough to pull it off. And the wonderful Giancarlo Giannini reappears as Mathis, the operative Bond wasn't sure he could trust in "Casino Royale"; here, the friendship between the two crackles with wary warmth. At one point Mathis catches Bond drinking the special martini variation named after his lost love (that would be the Vesper, and in the movie, a bartender helpfully offers the recipe so you can make your own at home) and sees the melancholy shadows in his eyes. Mathis asks his friend, with softhearted solicitiousness, if he might like something else to help ease his suffering. "I have pills for everything," he says. "Some make you taller; some make you forget."

But first and foremost, "Quantum of Solace" reminds us how lucky we are to have Craig as Bond. Sean Connery is certainly the iconic Bond, the actor most people automatically think of when they think of 007. And he's certainly the most elegant Bond; he set the bar, high, for the stylishness of the franchise. But he played Bond -- entertainingly -- as a self-conscious cartoon. Craig is going for something very different here, and one of the joys of watching him is seeing how many new layers he can bring to a character we already thought we knew. Craig is a much finer actor than Connery was during his term as Bond: Connery became a great actor later. But Craig is good now.

Part of his skill lies in his physicality, and I'm not just talking about those impressively molded pecs. Even in his trimmest tux, Craig walks with the purposefulness of a stocky tomcat. He has the look of a guy spoiling for a fight, and he usually finds it. But Craig is also the most romantic of the Bonds, the one who, despite his penchant for getting into some nasty dust-ups, sports most of his cuts and bruises on the inside. You can see that in the way he parries with his cool-as-a-cuke supervisor, M. As Dench plays her, M is a silvery presence whose inner core is all steel. She and Bond are wary of each other: She fears his tendency to act impulsively, not judiciously; and he chafes at the control she tries to impose on him -- he seems to know that his best instincts are rooted in his very impulsiveness. Still, he generally approaches her with the deference of a schoolboy who knows he hasn't gotten it quite right, and his humility is disarming. "Quantum of Solace" is a frustrating picture, an ambitious bit of pop entertainment that strives for lavish greatness it can never achieve. But Craig never overreaches, and yet he accomplishes the unthinkable. He's not the Bond we ever asked for or hoped for, yet he's reimagined the character in ways we never could have foreseen. He's Bond with soul.