These are a few of our favorite things. 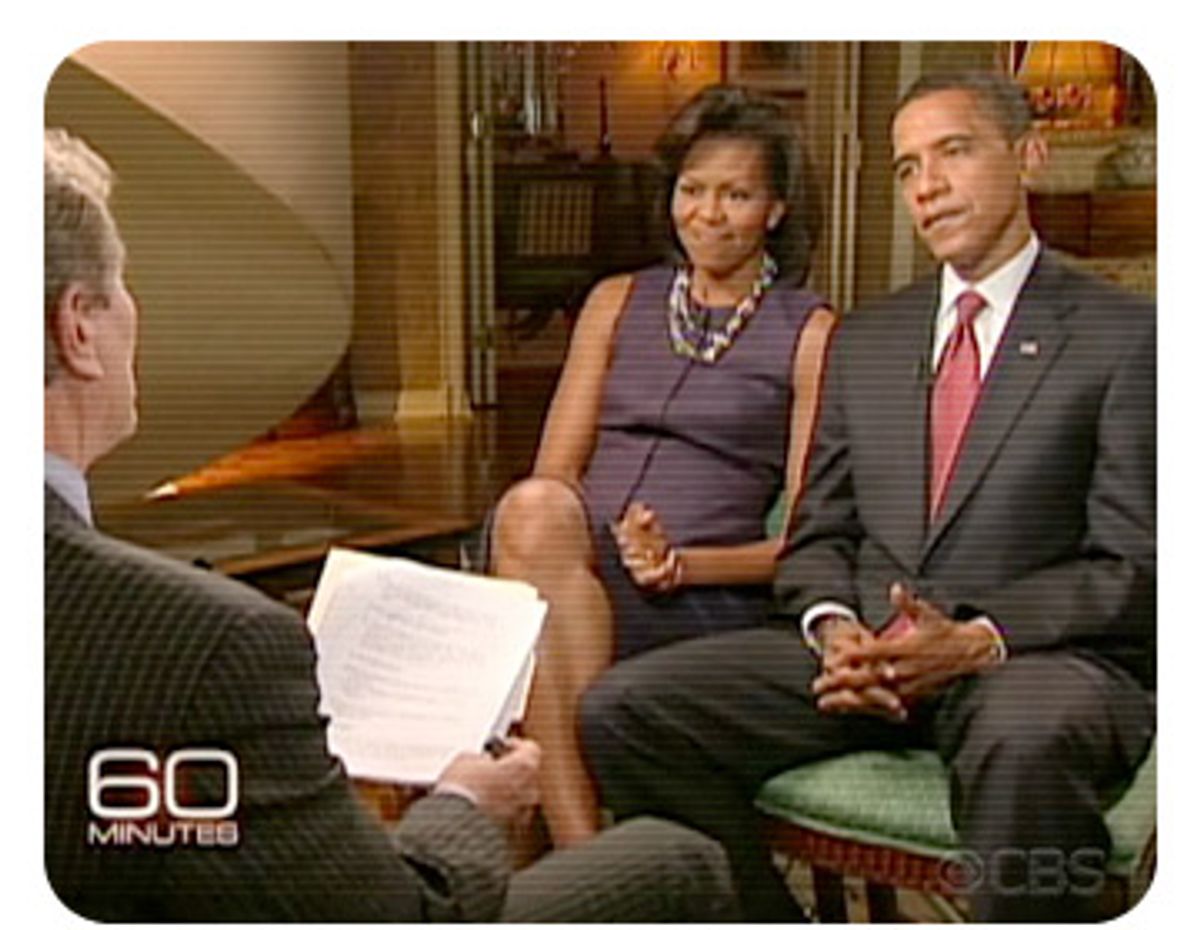 I hope everyone caught the Obamas on "60 Minutes" last night. It was a pinch-yourself interview with both the president-elect and his wife, during which it seemed far too good to be true that two such smart, relatable, incisive and direct people are just a few months away from taking up residence on Pennsylvania Avenue.

Below were some of my very favorite moments of the interview as well as clips so that you can watch (or rewatch). I will say off the bat that there was one regrettable, 1956-style moment at the very tail end of the sit-down, during which interviewer Steve Kroft asked Obama about his feelings on a national championship for college football, and as our next president leaned forward to discuss the topic with his interviewer, he glanced over at his wife and said, "Excuse me for a second," and she waved it off with "Don't mind me." Because girls don't like football. Or something.

But that quibble aside, here were some of the extraordinary, progressive, remarkable things said in the rest of the nearly hour-long conversation:

1. When Kroft asked Obama to compare the current financial crisis to the dire situation faced by Franklin Delano Roosevelt when he was elected in 1932, Obama made a very nuanced, compelling point, noting that in 1932, things were worse. "You had a third of the country that was ill-housed, ill-clothed, unemployed," he said. "We're not going through something comparable to that, but I would say that this is as bad as we've seen since then, and if we don't take some significant steps, it could get worse." The man is calm. And reasonable. And unwilling to be overdramatic, but he still manages to articulate exactly what we should be afraid of and why. His directness is remarkable, and incredibly confidence inspiring. Like a doctor who tells you exactly what he or she is about to do and whether or not it's going to hurt.

3. When asked about when he'll name his Cabinet, Obama just grinned and said, "Soon." How soon? Grin. "Soon."  Asked directly about the stories that he is about to or has already offered Hillary Clinton the secretary of state slot, the president-elect just said, "She is somebody who I needed advice and counsel from. She is one of the most thoughtful public officials that we have. Beyond that you're not getting more out of me, Steve."

Notably, however, a few minutes later, Obama said he'd been reading a lot of Abraham Lincoln's writing, and when Kroft pointed out that Lincoln put a lot of his political enemies in his Cabinet, Obama said, simply, "He did." Asked by Kroft if that was something he'd been considering, Obama said, "Well, I tell you what. I find him a very wise man."

4. Asked about the history he made by becoming the U.S.'s first African-American president, Obama immediately, and movingly, brought up the perspective of his mother-in-law, Marian Robinson, whose hand he held while watching the election results come in. "You think about Michelle's mom, who grew up on the west and south sides of Chicago," he said, "who worked so hard to help Michelle get to where she is, and her brother be successful. She was sitting next to me  as we were watching returns. And she's like my grandmother was, sort of a no-fuss person. And suddenly she just kind of reached out and started holding my hand, kind of squeezing it. And you had this sense of: Well, what's she thinking? For a black woman who grew up in the '50s, in a segregated Chicago, to watch her daughter become first lady of the United States."

5. When Kroft probed Barack about the list of household chores he's had and how many of those chores will now be done by other people, the former senator opined, "Sometimes it's soothing to wash the dishes." His wife, however, objected, looking at him like he was crazy, and saying, "Since when was it ever soothing for you to wash dishes?" "When I had to do it," Barack replied, a little lamely, "I'd make it into a soothing thing."

7. Kroft questioned Michelle about her stated goal of being mom in chief in the White House, noting that she, like her husband, is a Harvard Law School grad and a Princeton grad and a high-powered executive, wondering to Barack, "How long do you give her knocking around that big house before she wants to start putting an imprint on the job of being first lady?" Thank you, Steve Kroft! Barack responded that his wife is going to "design her own role, set her own path," but that she is very serious about her priority on motherhood, which I believe. For her part, Michelle noted, "the thing we've learned as we've watched this campaign is that people, women, are capable of doing more than one thing well at the same time. I've had to juggle being a mom in chief and having a career for a long time. The primary focus for the first year will be making sure the kids make it through the transition. But there are many issues I care deeply about."

8. Everyone needs to chill about the dog. It's not arriving until the family is ensconsed in the White House, sometime in late winter or early spring.

9. And as for the White House, perhaps the best part of the whole interview was something Michelle said about her tour of it. "The White House is beautiful," she said. "It is awe-inspiring. What I felt walking through there is that it is a great gift and an honor to be able to live here, and I want to make sure that we are upholding what that house stands for."

So far, the Obamas are on track to uphold what the White House stands for better than many of their recent predecessors.