Republicans have flooded the airwaves with baseless propaganda to discredit the Coleman-Franken recount in advance. 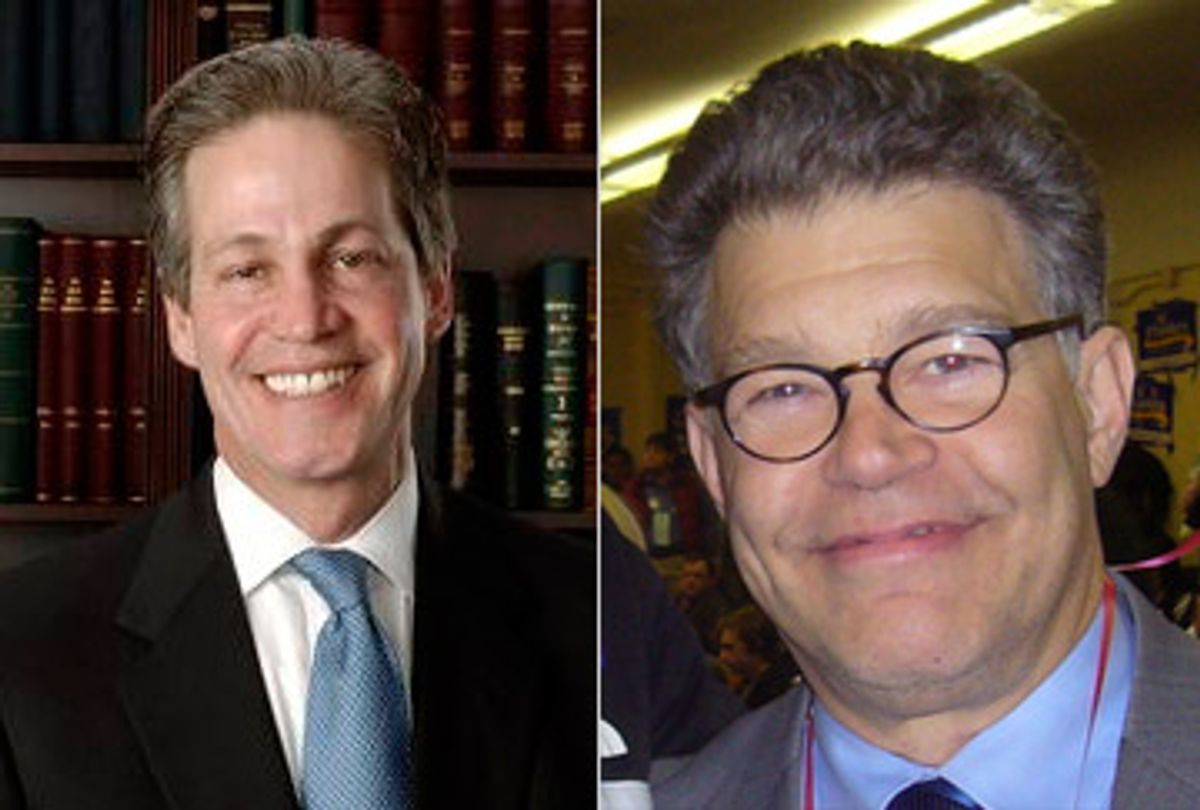 Rebuked and humiliated by American voters on Election Day, the right-wing noise machine continues to blare as loudly as ever, currently devoting special attention to the Minnesota Senate recount. From the Wall Street Journal editorial page to Fox News Channel, the message echoes the post-election strategy of incumbent Republican Sen. Norm Coleman by discrediting the recount in advance. The National Republican Senatorial Committee issued a disgusting, McCarthy-style press release that sought to connect Mark Ritchie, the state official who will oversee the recount, with the Communist Party -- not exactly Minnesota nice.

Evidently Coleman and his allies fear that his notional lead of less than one-tenth of one percent will evaporate if all the votes are counted. The stakes are high, of course (although perhaps not quite as high as conventional wisdom insists). That is why the barrage of propaganda about the aftermath of the Minnesota race has intensified and expanded far beyond its borders.

Coleman's opponent Al Franken, the writer, comedian and former radio personality also happens to be a friend of mine. So readers should take that acknowledgment into account as they assess the facts and views presented here. Certainly I don't see any reason to stand by and let the likes of Sean Hannity bulldoze Franken and the voters of Minnesota when my perspective is no more slanted than theirs.

As soon as the initial election results came in, showing that the race would be close enough to trigger the automatic recount mandated by Minnesota law, Coleman began campaigning to stop that normal and fair process. He claimed to be concerned about the cost of the recount and publicly asked Franken to "let the healing begin" by waiving the recount and conceding the election.

The recount has yet to begin, but the ordinary post-election precinct canvassing has already reduced Coleman's putative lead from more than 700 votes on Election Night to 206 votes as of yesterday. It remains to be seen whether Coleman will follow his own advice should Franken take the lead when the canvass is complete -- or whether his worries about healing and expenses were pure smarm.

In any case, the Coleman camp is clearly worried and has turned up the noisemakers to discredit both the canvass and the recount. Nearly every movement of a few votes into Franken's column has elicited shrieks of "fraud" from the incumbent's friends. In each case, those shrill complaints have been thoroughly discredited by independent observers.

On Fox News and on the Journal editorial page, much was made of 32 absentee ballots allegedly kept overnight in an election official's car and then counted the next day. Nothing of the kind occurred, as Coleman's own attorney later admitted after apparently inventing the story himself. But the purpose of the false tale was clear enough -- and those spreading it didn't mind smearing innocent people whose characters are superior to theirs.

Impugning the integrity of Minnesota's post-election process is easier when context and history are blurred. The suggestions of "mischief" outlined in the Journal editorial make no sense otherwise. For instance, the Journal editorial whines that the "lopsided bleeding of Republican votes is passing strange considering that the official recount hasn't even begun."

But that insinuation of cheating is utterly wrong, as Minnesota Public Radio, one of the state's most respected news organizations, discovered in a review of election results from the past 10 years. On average, the MPR analysis showed that vote totals in statewide elections changed by well over 1,000 votes -- so the "lopsided" difference in the Franken-Coleman race so far is below normal. It is also typical for the Democratic candidate's vote total to increase, no matter which party controls the state election apparatus (although the MPR analysts didn't try to explain why).

According to the editors of the Minneapolis Star-Tribune, the state's largest daily newspaper, the "conservative statistics" differ starkly from the reality-based data used by everyone else. The paper's editor in charge of computer-assisted reporting compared the actual numbers and found that "58 precincts changed their Obama totals for a net gain of 1,121 votes (46 precincts added another 1,268 votes for Obama, 12 precincts took away 147 votes)." while "48 precincts changed their Franken totals for a net gain of 459 votes (37 precincts added 569 votes for Franken; 11 precincts took away 110 votes)." In short, the Lott accusation, originally featured on Fox, was "simply wrong." Perhaps the old aphorism should be changed to "lies, damned lies, and conservative statistics."

What is really happening as the votes are canvassed has little to do with the dark fantasies of the far right. When a Star-Tribune reporter visited a county office where precinct totals were under review this week, observers from both the Coleman and Franken campaigns endorsed the process as careful and fair. "I'm just watching like everyone else. It all seems pretty straightforward to me," said Democrat John Stiles. A Republican volunteer named John Nygaard concurred: "It's very transparent -- I'm impressed. I didn't realize how much work went into this."

Neither does Gov. Tim Pawlenty, who has lent his good name and image to the false accusations on Fox. Perhaps the governor ought to simply do his job, which is to make sure that all the votes in Minnesota are counted and recounted accurately and fairly in accordance with the law. That is the least we should expect from a state with a reputation for decency and clean politics.