On Sunday the president-elect told "60 Minutes" he wants to capture or kill bin Laden. Is he setting himself up for failure? 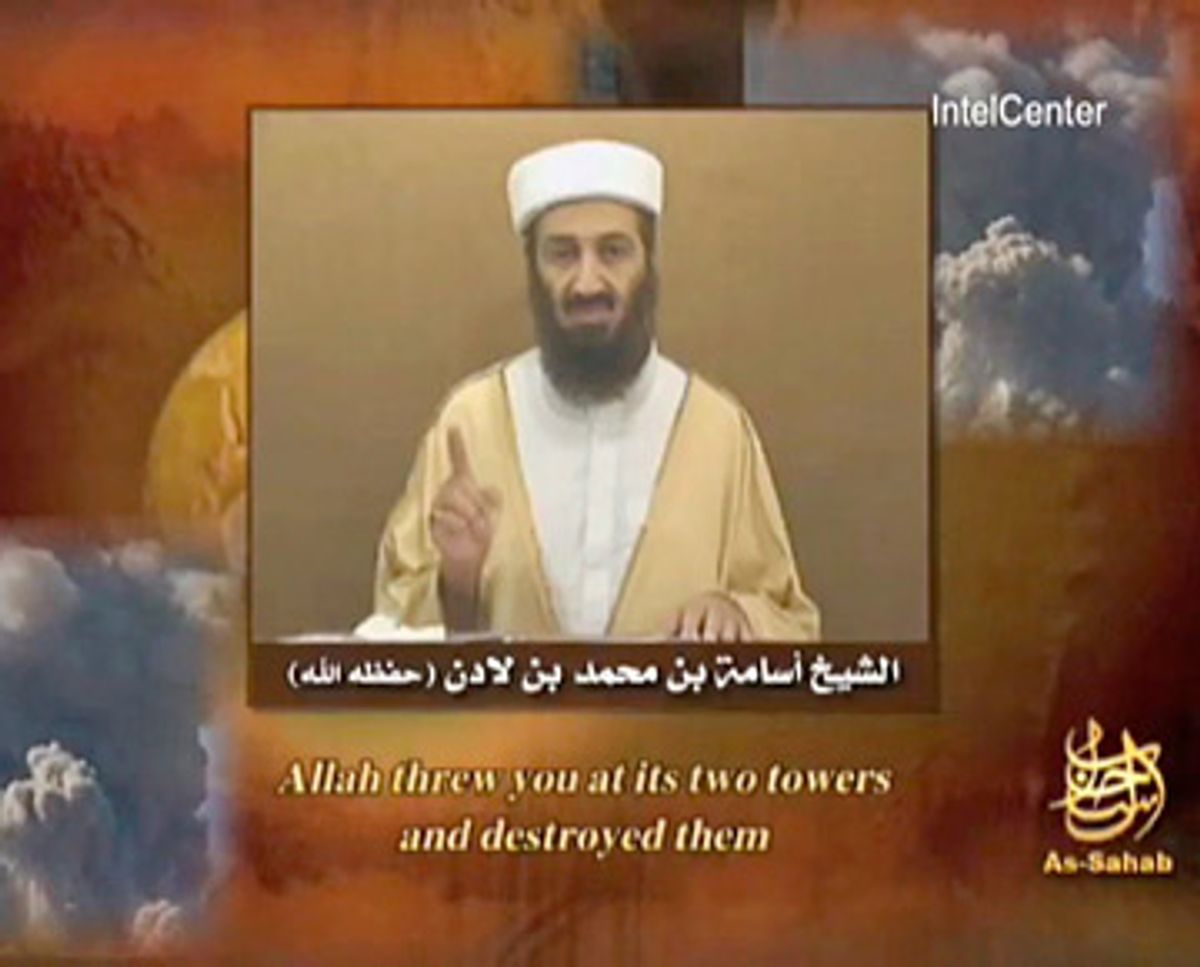 In Sunday's interview with "60 Minutes," President-elect Barack Obama reaffirmed that "it is a top priority for us to stamp out al-Qaida once and for all," adding, "and I think capturing or killing bin Laden is a critical aspect of stamping out al-Qaida." Obama argued that the Saudi terrorist "is not just a symbol" but is rather "the operational leader" of the organization, which he said is still planning attacks against U.S. targets.

Obama's quiet seriousness of purpose is a welcome contrast with George W. Bush's swaggering pronouncements about bin Laden being "wanted dead or alive," or his darkly comic standard answer to the question of why bin Laden has not yet been caught. "He's hiding," Bush likes to say.

And for those who believe Bush, obsessed with Iraq, has either not tried very hard or has secretly avoided capturing bin Laden, Obama's words are probably reassuring. Now American attention will return to the real author of 9/11, and a more determined effort might yield fruit. But the question is whether the new president should really focus his attention on bin Laden, and spend his political capital in a renewed attempt to bring him to justice. There are many reasons why a stepped-up and publicized pursuit of bin Laden may prove costly to Barack Obama.

The first is the danger of failing, just like his predecessor. After the bravado of the early post-9/11 period, and vows to catch his quarry, Bush came up empty. An enemy who struck at the beginning of his first term is still at loose in the Pakistani-Afghan borderlands at the end of his second.

Some in the region believe that Bush never caught his nemesis on purpose. A secular-minded newspaper in Afghanistan said in October that French troops in that country as part of the NATO contingent had for some time alleged that they were on the verge of capturing bin Laden when their American counterparts stopped them from doing so. The paper referred to a French documentary that featured interviews with the troops and that maintained that the Bush administration needed bin Laden to be at large in order to justify its military expansion into the region.

This theory is a more sinister variant of the view that capturing Osama was simply not very high on Bush's list of priorities, and that he put all his resources instead into destroying Saddam Hussein. Already in spring of 2002, as his administration geared up for what was supposed to be a swift and stunning victory in Iraq, Bush was trying to deflect attention from his failure to capture the author of 9/11. Bush downplayed bin Laden's importance, and said he didn't seem to be at the center of any command structure. He decried the supposed fallacy of focusing on "one person" and admitted, "I truly am not that concerned about him."

Should the next president now be playing up bin Laden's importance? Does bin Laden merit such attention? In a speech at the Atlantic Council last week, the head of the Central Intelligence Agency, Michael Hayden, largely concurred with the points Obama has been making about the continued centrality of al-Qaida in its Pakistani haunts to U.S. security concerns. Contrary to Republican politicians who still speak of Iraq as the central front in the "war on terror," Hayden forthrightly announced, "Al-Qaida in Iraq is on the verge of strategic defeat."

In contrast, Hayden said, nowadays "all the threats we have to the West have a thread that takes them back to the tribal region along the Af-Pak border." He also underlined that he considers capturing the organization's leader a top priority.

But Hayden stressed bin Laden's symbolic importance more than his operational role, observing, "Because of his iconic stature, his death or capture clearly would have a significant impact on the confidence of his followers." Unlike Obama, Hayden said that bin Laden "appears to be largely isolated from the day-to-day operations of the organization he nominally heads."

Rumors swirl in the region about the whereabouts and activities of Osama bin Laden. It is held by some observers that the world's most wanted man is no longer with us. In September of 2006, a French newspaper carried a leak from that country's General Directorate for External Security to the effect that Osama bin Laden had died that summer of typhoid fever. French intelligence had received the report from Saudi intelligence, which should have good sources on al-Qaida. The Saudis backed off the assertion, apparently because they could not locate the grave site. But it should be underlined that the puritan Wahhabi creed of Saudi Arabia forbids headstones and stipulates that the body should be wrapped in a shroud and buried by sunset of the day of death, so that a Saudi grave in a wilderness might never be discovered.

The speculation about bin Laden's demise has been fueled by his failure to issue any further videotapes after his intervention in the 2004 presidential election. Audiotapes would be easier to forge or to splice together. Even his recent audiotapes, such as the one last May threatening Europe, may have been recorded much earlier. Obviously, Obama will not be able to catch his man if he is in an unmarked grave in South Waziristan.

More recently, however, the Pakistani Geo satellite television station has reported that its sources say bin Laden is still alive. According to a report from late October, he is hard at work on a book about al-Qaida. He is said to blame the United States for the world's present financial crisis and to be exercised about what he calls U.S. "atrocities" against Muslims.

If bin Laden does remain healthy and active, it still won't be easy to find the terrorist mastermind. Saddam Hussein was only found because one of his own associates informed on him to the Americans. Bin Laden, in contrast, appears to retain the loyalty of his own retinue. The Saudi terrorist is widely thought to be hiding in one of the tribal agencies in the mountainous wilderness that stretches along the border of Afghanistan and Pakistan. The Pakistani government estimates that 60 percent of the land area in these Federally Administered Tribal Areas (FATA), which are analogous to the Native American reservations in America's Southwest, are administratively inaccessible. Others have sometimes argued that bin Laden is inside Afghanistan itself, where he built safe bunkers over the decades.

Terrorism experts differ on whether the remnants of al-Qaida in Pakistan's tribal agencies pose a dire threat to the U.S. Even Hayden admitted last week, "The truth is, it's not all that easy to build a worldwide terrorist network and manage a global fight from an isolated outpost in northwestern Pakistan." It is not clear what exactly the few hundred Arab expatriates in places such as South Waziristan could do from there to the United States. The attacks on Sept. 11 were largely planned by European-trained engineers resident in Europe, and all they got from al-Qaida was ideological direction, training in camps in Afghanistan, money and some extra muscle. Despite Hayden's fears that training camps are being reestablished in Waziristan, it is not plausible that nowadays well-educated fanatics based in the West could come to them for high-powered training, be provided with money and colleagues, and leave them to come attack the United States. The militants are besieged by the Pakistani, Afghan and NATO militaries. The old al-Qaida seems to have little or no command and control structure left (as Bush admitted already in 2002). Terrorism analyst Marc Sageman, who was a CIA field officer in Pakistan in the late 1980s, maintains that the old al-Qaida organization is gone. What is left is loose networks of wannabes and hobbyists around the Muslim world, mainly linked by the Internet. Sageman's interpretation is challenged by Bruce Hoffman, who insists that al-Qaida survives as an organization that can make things happen. If Sageman is right, then a further siege of the FATA regions is a fool's errand.

Part of the reason for this debate is that the term "al-Qaida," like the label "Taliban," is used inexactly by many analysts. The technical definition of al-Qaida is the fighters, mainly Arabs, who pledged fealty to bin Laden and undertook an operation for him. Few such individuals have not either been killed, captured or forced to retire from the field. But the label is still being applied to militants whose links to bin Laden are either distant or nonexistent.

The Pakistani military attacked some clans of the Mamund tribe in Bajaur recently, on the grounds that they had melded with the Pakistani Taliban. A general breathlessly announced that he had found al-Qaida elements with the defeated tribesmen. Then it turned out that they were Tajiks and Uzbeks, probably fundamentalists persecuted in their own Central Asian countries by post-Soviet commissars, who had taken refuge with the Mamund. They were not what most Americans would think of as al-Qaida, exactly, but that is what the Pakistani military called them.

The practical question of how the United States would get at Osama bin Laden if he is in the FATA regions of Pakistan is hard to answer. Certainly, no American troops will be allowed to operate there. Pakistan was born in the struggle to escape British colonialism, and is all about not having foreign troops on its soil. There is already an extensive intelligence cooperation between the U.S. and Pakistan, with CIA and FBI field officers covertly on the ground.

The Bush administration has been targeting Arab fighters with predator strikes. Occasionally, however, they have killed Pakistani civilians in these attacks, and the Pakistani public is increasingly angry about this violation of their country's sovereignty. There is some danger that the democratically elected Pakistani government, which came to power in February, will be undermined if the public views it as authorizing or allowing the U.S. to attack their country at will.

It is risky for Obama to focus so much on killing or capturing Osama bin Laden. If he does not succeed soon, his critics will constantly throw it in his face. If such domestic criticism begins to sting, it could impel him to rash actions. The danger of mounting a major U.S. military campaign to kill or capture Osama bin Laden and destroy al-Qaida is that it risks alienating further the local Pashtun tribes who suffer collateral damage, as well as the Pakistani public in general. Gaining the trust and friendship of the Pakistani public and political elite is far more important in the long term to the struggle against al-Qaida than any limited military operational success could be.