This 3-D animated tale about a canine superhero is clever and action-packed -- but is it too culturally savvy for its own good? 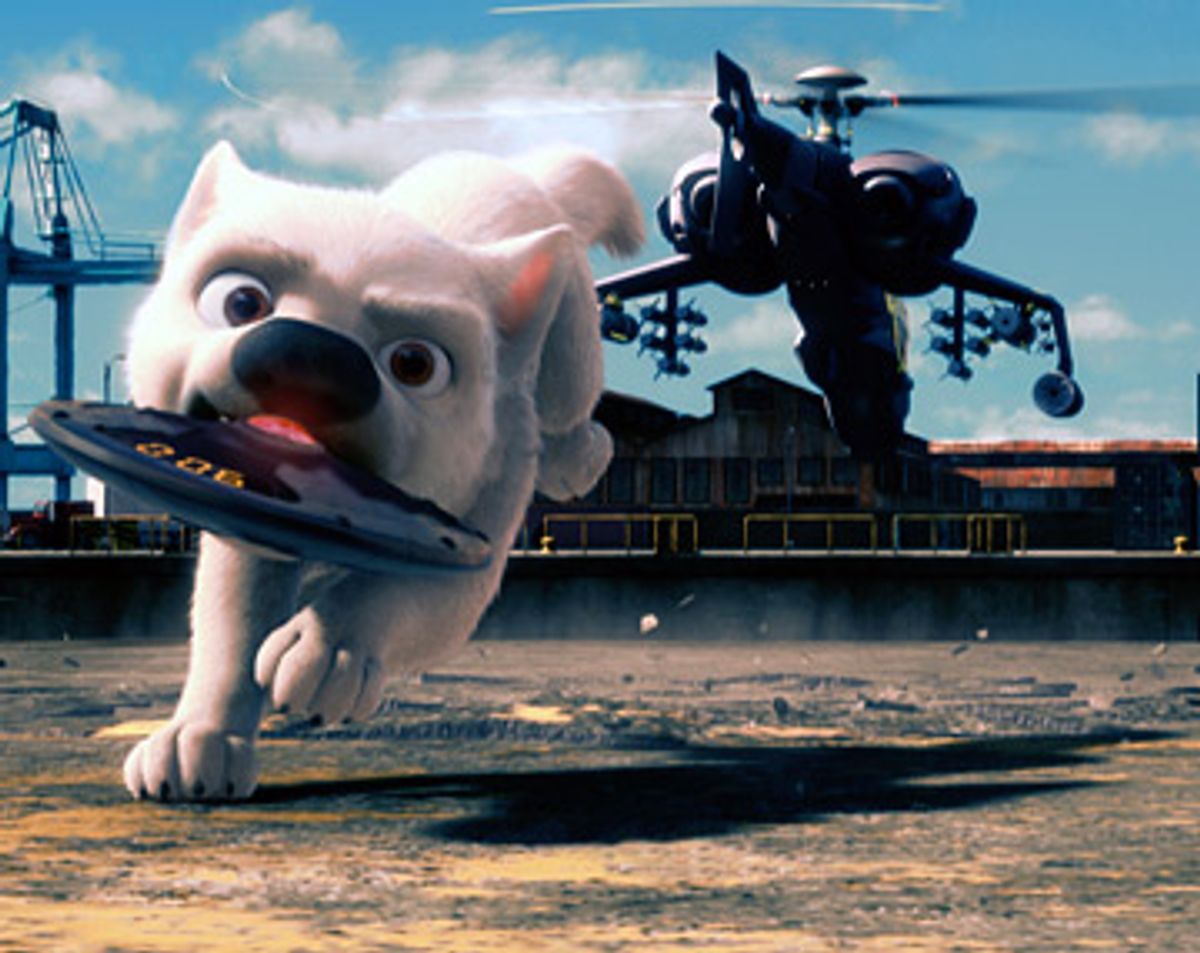 The 3-D gimmick has been heralded as the future of movies at least since 1953, when good old one-eyed André DeToth gave us "House of Wax," a novelty picture that wowed audiences with special effects like a paddle ball that appeared to be bouncing straight out of the movie screen. The technology has gotten more sophisticated since then, but that doesn't necessarily mean it's been better used. The recent live-action adventure "Journey to the Center of the Earth" was fun partly for its innovative use of 3-D effects -- I still remember vividly that flock of phosphorescent birds fluttering toward me from the screen -- and partly for the fact that it had a sense of humor about itself; its lack of pretension was refreshing, and rare, in movies these days. But I remember almost nothing from Robert Zemeckis' cumbersome, self-serious, computer-generated 3-D "event" (to call it a movie would be giving it too much credit) "Beowulf," except for a few primitive, pointy swords jabbing at me from the screen. Thanks, but unlike poor André, I've got two good eyes and I'd like to keep them.

Supposedly, 3-D movies are still the wave of the future, but 3-D effects should add value to a work, not just distract us from its problems. And in the case of the Disney feature "Bolt," 3-D technology doesn't add -- or even distract -- enough. This is an excessively clever little tale (directed by Byron Howard and Chris Williams, and written by Dan Fogelman and Williams) about an extremely cute white shepherd (his voice is provided by John Travolta) who leads a fulfilling, event-filled dog's life with his human, Penny (Miley Cyrus). Except it's not any kind of normal dog's life: Bolt is an actor-dog, the star of a hit TV series in which he's a superdog with superpowers who's repeatedly called upon to save Penny from the clutches of an evil mastermind and cat lover known as Dr. Calico (Malcolm McDowell). Bolt the superdog doesn't get hit by cars; he can stop them, and crumple them, with his stocky body. His patented "superbark" is strong enough to turn a highway into a pile of crumbled concrete.

But Bolt can't really do those things: He's only made to believe he can, thanks to the behind-the-scenes machinations of the show's cast and crew, as well as its director (voiced, unctuously, by James Lipton). That's because in order to perform, Bolt needs to believe he's really saving Penny. He doesn't know it, but he's being abused as an actor, if not as a dog. Bolt's director is using scare tactics to get a performance out of him, taking his purest doglike quality -- his loyalty -- and turning it into a corrupt version of method acting. But for Bolt, saving Penny isn't acting; it's life.

Big drama ensues when Bolt escapes from the set and finds himself in the real world, a world in which he has no superpowers -- he just doesn't know it yet. And that's when "Bolt" lost me. I know, I know: This is an essentially harmless and uplifting little story from the Walt Disney company, a monolith that would never do anything to prey on a child's worst fears. ("Bambi," anyone?) The directors have at least taken some care to keep the tone mostly light: There's lots of hip, winking dialogue, and a number of nicely designed and conceived supporting characters, including a sassy, streetwise cat named Mittens (Susie Essman, of "Curb Your Enthusiasm"), and a fat, TV-obsessed hamster named Rhino (Mark Walton) who can't tell reality from fantasy, and who turns his cluelessness into an advantage.

But "Bolt" is just too knowing; it keeps reminding us, loud and clear, of how culturally savvy it is. "TV and movies aren't reality -- any kid knows that!" is the movie's constant refrain, always accompanied by an invisible roll of the eyes. At the same time, "Bolt" engages in plenty of stock animal endangerment, ostensibly to keep us interested in the story. I guess animal endangerment is supposed to be less overtly manipulative if we're talking about animated animals. Still, I got no pleasure from watching Bolt (he's a marvelously designed character, with expressive eyes and a fireplug body) trying to free himself from a metal compartment on an animal-control officer's van: With unswerving belief in his superpowers, he bangs his head against the door so many times, he gets punch drunk.

I guess Bolt's frustration is supposed to be cute or funny or incite pathos, or something, but the charm was lost on me. Bolt's seemingly bottomless, and exceedingly doglike, capacity for love is appealing; it's hard not to root for him. But I'm not sure we have to be fed through the emotional wringer to do so. And what about those 3-D effects? I recall a few particularly interesting ones: Rhino gets around by scurrying inside a clear plastic ball, which gave the movie's designers the chance to pull off some groovy point-of-view shots. Of course, we all know that ultimately, everything in "Bolt" is an illusion: Hamsters don't talk, and dogs can't destroy roads with a "superbark." But like Bolt, we want to believe in the fantasy, and belief takes more muscle than eye rolling does. "Bolt," with its numerous winks and nudges, reminds us how attuned we are to the falseness of pop culture, which isn't the same thing as connecting us with its truths.