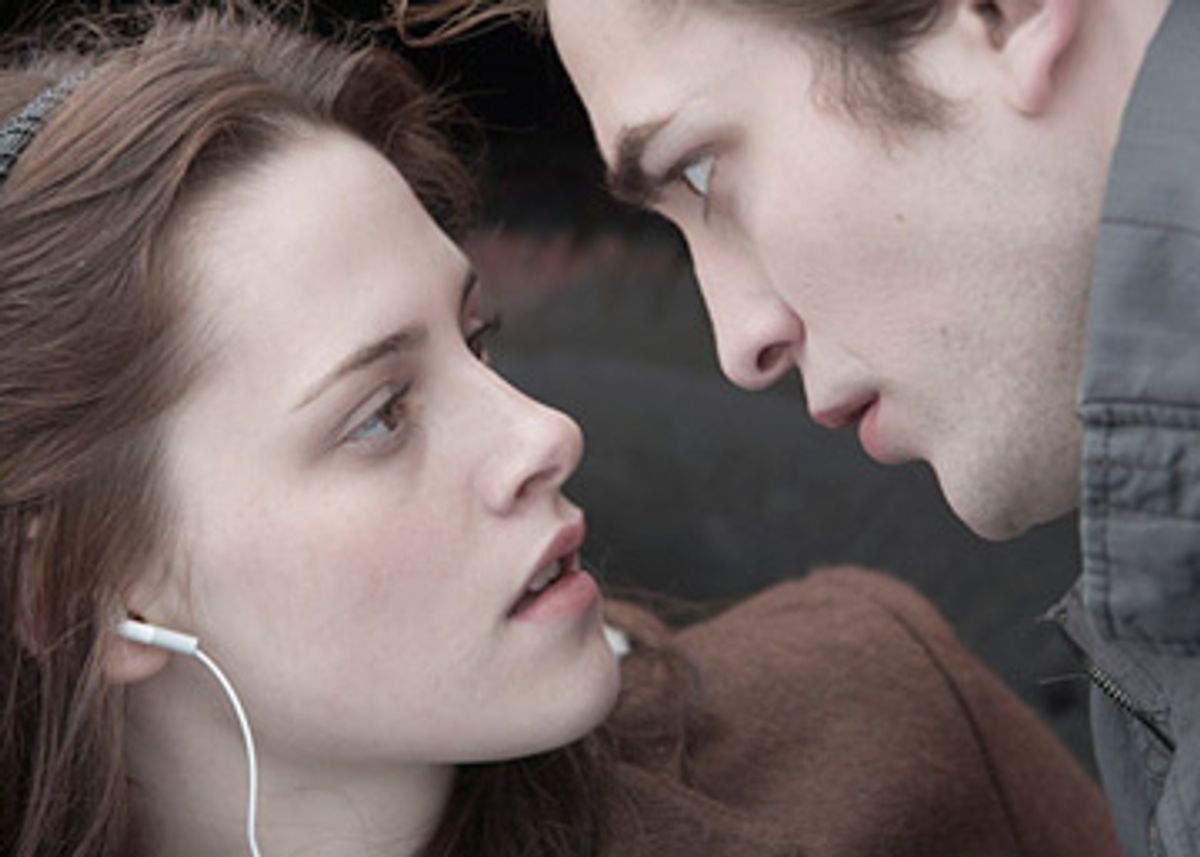 While the DVD revolution has its merits -- for some, the big advantage is not having to rub shoulders with actual human beings in a movie theater -- there are certain movies that need to be seen with a crowd. If you care about pop culture at all, you owe it to yourself to see "Twilight" -- Catherine Hardwicke's adaptation of the first volume of Stephenie Meyer's blockbuster vampire-romance saga -- with an audience full of teenage and preteen girls. I saw it at a promotional screening that included a mix of critics (not fun) and the aforementioned teenage girls (totally fun), and I think I need to see it again in a critic-free zone, if only to experience, once again, the wave of embarrassed titillation that rippled through the crowd when the movie's vampire heartthrob, Edward Cullen -- played by English actor Robert Pattinson -- strode into view, a vision of erotic suspended animation.

Did the girls giggle because they found Edward impossibly good-looking? Or because he looks flat-out ridiculous? I couldn't tell you, because this Edward Cullen, with his brooding eyes and mile-high blond quiff, is both. Part Elvis, part Simon Le Bon, and a direct descendant of both Heathcliff and the Leader of the Pack, the movie version of Edward Cullen -- who's 17 going on 1,700 -- is a pure pop creation, a fantasy who's taken up temporary residence in the body of an actor. When this Edward speaks haltingly to the love of his (eternal) life, new girl at school Bella Swan (Kristen Stewart), his diction is stiff, Victorian. Yet it's the opposite of mannered: "I can read every mind in this room except yours," he tells her, in what would be the hokiest line of this or the last century, if he hadn't painstakingly removed all the quotation marks from it. Edward Cullen doesn't care if he makes you LOL or say OMG. He's a miracle of early 21st century cinema: He's completely irony-free.

Note that I didn't say what Pattison does is good acting. But the performances in "Twilight" -- some of which, most notably Stewart's, are admirably solid -- are beside the point. What's more, for the trillions of teenagers and their moms who have read every book of the "Twilight" series, there will be many issues of adaptation to discuss, but I'm staying out of that mess: I confess I'd gotten through only the first hundred pages of "Twilight" before seeing the movie, and even though I plan to continue (I like the plain-spoken vividness of Meyer's characters), the nuts and bolts of comparing the intricacies of the book to the inevitable shorthand of the movie version -- a task I generally dislike, anyway -- will have to fall to someone else.

Hardwicke's vision of the book stands by itself, anyway. "Twilight" is a slightly awkward picture: Sometimes Hardwicke hits a sweepingly majestic groove, only to stop short before she reaches the peak of go-for-broke swooning. In other places, she's too heavy-handed with the honey dripper -- some of the movie's creepy romantic goop is ladled out in sticky puddles. Steel yourself, too, for some howlingly bad makeup: The vampire characters sport a marble-toned pallor that looks as if it was applied with a spray gun.

But Hardwicke still manages to find the sweet spot where Gothic literature and the iPod meet and make goo-goo eyes at each other. Without embarrassment, she and screenwriter Melissa Rosenberg dig right into the almost generic simplicity of the story: Stewart's Bella, the child of divorced parents, has just left her home in Phoenix to live with her dad, sheriff Charlie Swan (Billy Burke), in Forks, Wash., a place with much gloomier weather. (The movie was filmed in Oregon, and Hardwicke and her director of photography, Elliott Davis, make great use of the landscape, giving us an owl's-eye-view of misted pine trees and moorish gray skies.) A place that doesn't get much sunlight is, naturally, attractive to vampires, and Forks has its own resident clan: There's the vampire dad, Dr. Carlisle Cullen (Peter Fascinelli), and a vampire mom, Esme (Elizabeth Reaser), and a number of adopted teenage vampire children (one of them played by Nikki Reed, who also co-wrote and starred in Hardwicke's "Thirteen"). Most of the Cullen kids, a mix of guys and girls, are conveniently, if a little incestuously, paired off into romantic couples. Edward is the loner, and when Bella, a pale, thoughtful-looking girl with unfussy but glossy brunet hair, attends her first day at Forks High School, he smells love right away -- and literally recoils.

Bella's pheromones are more than he can bear; she, in turn, believes he's the most beautiful creature she's ever seen. Eventually, the two acknowledge their mutual attraction to one another, and begin to navigate the tricky business of teenage love. The big problem is that Edward doesn't even dare to kiss her. If he gets too excited, he'll want blood, and once he starts sucking, he won't be able to stop. His honesty is admirable: He's one of the few guys on the planet who knows that the old "I swear I'll pull out in time" is a promise that's impossible to keep.

Hardwicke has already made one movie about teenagers who grow up too fast ("Thirteen") and another about a teenager who gets pregnant without even trying ("The Nativity Story"), so teenage vampires aren't such a stretch. She keeps the story moving briskly, adding touches of dry wit here and there. (When one of Bella's new schoolmates asks her, "Aren't people from Arizona, like, really tan?" she responds, deadpan, "Maybe that's why they kicked me out.") Most significantly, she's in tune with her lead actress: Stewart is an intuitve, appealing performer (she's given sturdy performances in pictures like Barry Levinson's recent "What Just Happened" and Jonathan Kasdan's "In the Land of Women"), and here, she manages to be a believably sexual presence -- that is, a young woman who's just starting to reckon with, all too painfully, the nature of sexual desire -- in a movie where there is, decidedly, no sex.

But even though I was only about 7, I don't think the meaning of the line -- a line that walks right up to the tiger's cage of romantic obsession -- was completely lost on me: Even then I could see that love was a danger as well as a pop daydream. Similarly, "Twilight" isn't about sex in the way we, as adults, usually think of it: It's more about the things you want before you know you want them, which is what makes it different from another recent vampire-themed phenomenon, Joss Whedon's beloved series "Buffy the Vampire Slayer." "Buffy," with warrior boldness, faced up to the danger and messiness of sex. "Twilight" acknowledges that danger, but only as a murky shadow.

Still, the movie hits one of its most exhilarating beats when Bella, in voice-over, utters the movie's (and the book's) thesis statement: "About three things I was absolutely positive. First, Edward was a vampire. Second, there was a part of him -- and I didn't know how dominant that part might be -- that thirsted for my blood. And third, I was unconditionally and irrevocably in love with him." Then she looks out her bedroom window and sees Edward below, standing next to his car. He's come to pick her up for school.

I saw "Twilight" with a male colleague, who was disappointed in it: Unlike me, he'd finished the book, and he wanted to see a more gradual and nuanced development in the romantic relationship between the two characters. "Whaddya mean?" I asked him, waving my arms. "He picked her up in his roadster! I mean -- that's awesome!"

Mars wants more development, Venus is perfectly content with the romantic gesture: Let's call the whole thing off. But then, "Twilight" is, by its very nature, all about unfinished business, the story of a brooding, caring romantic hero and the woman who cannot -- although she wants to -- yield to him. Only his eyes penetrate her. For now, that's enough.