Tuning out the brain-dead megaphone 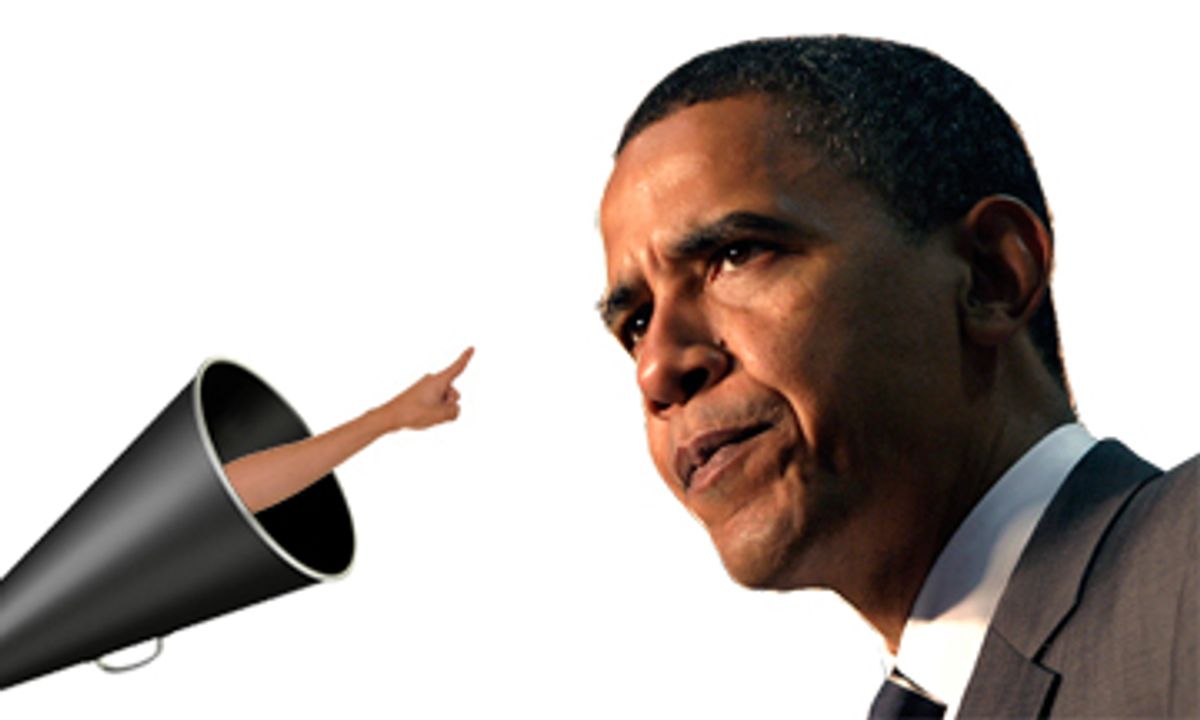 If you’re having trouble remembering what the recent election was all about, rest easy: You’re probably not going senile — you’re likely experiencing the momentary effects of brainwashing.

For weeks, your television, newspaper and radio have been telling you that America is a "center-right nation" that elected Barack Obama to crush his fellow "socialist" hippies, discard the agenda he campaigned on, and meet the policy demands of electorally humiliated Republicans.

This is the usual post-election nonsense from the Braindead Megaphone, as author George Saunders famously calls our political and media noise machine. When George W. Bush wins by 3 million votes, the megaphone blares announcements about a conservative mandate that Democrats must respect. When Obama wins by twice as much, the same megaphone roars about Democrats having no mandate to do anything other than appease conservatives.

It's confusing, isn't it? We hazily recall backing Obama and his progressive platform. Yet, the megaphone's re-educative shock treatment aims to wipe away that memory and conjure eternal conservatism from our spotless minds.

Luckily, we have polling to maintain our sanity.

Public opinion surveys show that most Obama voters knew the Illinois senator was a progressive when they cast their ballots — and that those votes for him weren't just anti-Bush protests; they were ideological. According to a post-election poll by my colleagues at the Campaign for America's Future, 70 percent of Americans say they want conservatives to help this progressive president enact his decidedly progressive agenda.

And Obama seems ready to back a "big bang" of far-reaching initiatives. "We can't afford to wait on moving forward on the key priorities that I identified during the campaign," he said in his first radio address as president-elect.

Judging from his advertisements, Obama identified a no-more-important priority than guaranteeing healthcare for all citizens. The Campaign Media Analysis Group reported that he devoted more than two-thirds of his total television budget to ads that included healthcare themes. In mid-October 2008, a Pew Poll found 77 percent of Americans said healthcare would be a decisive concern in their presidential vote.

The moral case for universal health care is obvious. In the world’s richest country -- in a country that builds lavish sports stadiums and showers Wall Street with trillion-dollar bailouts -- 18,000 people die each year because they lack health insurance. We permit this annual massacre while our wasteful system exacerbates our debt and saps our economic competitiveness by forcing us to spend more money per capita on healthcare than any other nation.

That said, if morality alone prompted solutions, this problem would have been addressed long ago.

Overcoming inertia on such a thorny issue requires budget pressure -- which Obama definitely faces. While some claim the deficit should preclude bold healthcare legislation, it’s the other way around. The Congressional Budget Office says America’s fiscal gap is “driven primarily by rising healthcare costs,” meaning a fix is an imperative.

Additionally, as with everything in Washington, a political motive is needed for action – and even conservatives acknowledge that Democrats have such a motive when it comes to healthcare.

Fifteen years ago, Republican strategist William Kristol warned that the Clinton administration's universal healthcare proposals represented "a serious political threat to the Republican Party" because, if passed, they "will revive the reputation" of Democrats as "the generous protector of middle-class interests."

As we all remember, Democrats failed to capitalize on the healthcare opportunity. But Kristol's prophecy was correct then, as it is now. With huge Democratic majorities in Congress come 2009, only the Braindead Megaphone is in Obama's way.

Please contact your local newspaper editor if you want to see the David Sirota column in your hometown paper.