In an exclusive Diane Sawyer interview, we're told that Spitzer's call girl is just like us. 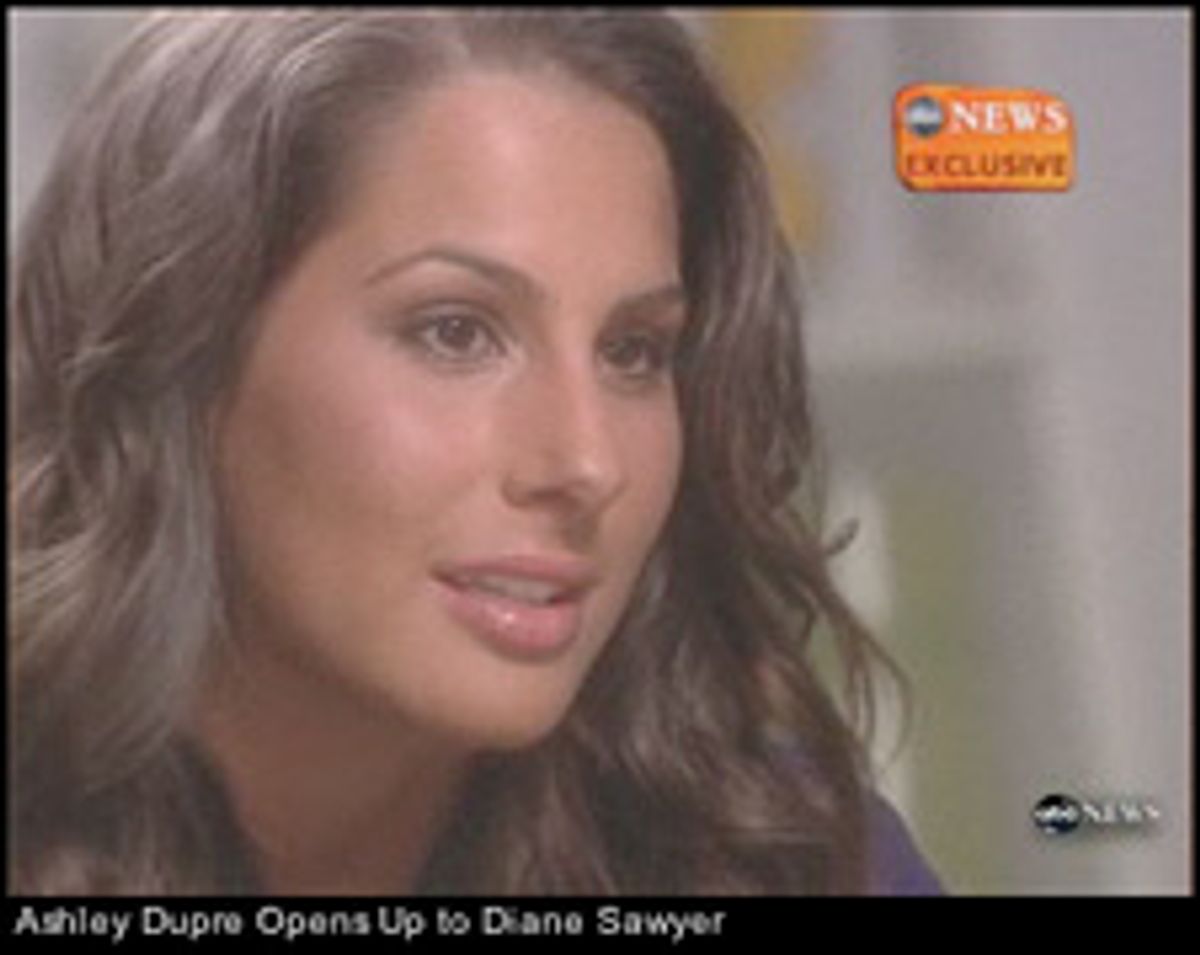 If a biopic were made based solely on 20/20's exclusive interview with Ashley Dupré, former Governor Eliot Spitzer's famed call girl, it might be called: "The Whore Next Door." Diane Sawyer asked plenty of questions of Dupré during the special, which aired Friday night, but there was one question at its heart: How does a normal all-American girl end up selling her body for cash?

At the beginning of the special, we're shown images of average young women -- who, pssst, are actually call girls -- walking around town and drinking wine in high-end restaurants, as Sawyer intones: "Most mystifying are the girls who came from nice homes, nice neighborhoods." Sawyer later says of Dupré: "She started out in a neighborhood probably like many of ours." In case you aren't quite getting her point, she later asks Dupré, "Do you think it could be anybody's daughter, anybody's friend?" Her response: "Yes."

Dupré's story is a familiar one, and one we have come to expect from female sex workers (and symbols): Her father was absent during her childhood, and her older brother ran away from home when she was just 12. She explains, in a little-girl voice reminiscent of Britney Spears: "I think by not having my father and my brother around, I really ... I felt like I missed something," she says, choking up. "To have a certain level of respect for yourself, how to carry yourself. Have that father that, you know, if I'm dating a guy and he can't stand him, you know, stick up for me and say, 'What are you doing?' The unconditional love feeling ... I just couldn't find it." She turned to work as an escort as a way to "emotionally disconnect myself, rather than be in a relationship and get hurt and be vulnerable." Sex with clients required being "emotionally disconnected -- like from your heart to your head," she says.

The most -- OK, the only -- riveting part of the short interview comes in a moment of courtroom style tension: Sawyer says, "You say 'the work' but you haven’t said the words …" With a grin, Dupré responds simply: "The work." Sawyer offers a rebuttal: "Prostitution." Dupré's face is steel; she does not flinch at the utterance of the word. She pauses for a moment and then widens her eyes as she says: "Escort." Sawyer: "What's the difference?" She darts her eyes to the left and says through a smile: "Escort." Again, Sawyer asks, "What's the difference?" At this point I am half expecting Dupré to break her calm and storm out of the room. Instead, she utters an "um" and then pauses. "I think it's um" -- she closes her eyes -- "the same." Her eyes pop open and she adds: "Perhaps." Sawyer asks Dupré whether there is a difference in her mind, and she responds, "Prostitution is only about sex whereas an escort is more … it's time spent ... and, you know, most of the time you go in and you're just someone to talk to." (Let's be real: Sex is hardly ever "only about sex." I've heard many accounts similar to Dupré's of intensely emotional conversations with clients from self-proclaimed prostitutes who do not travel in high-class circles.)

The special's intended take-away was clearly that any girl -- your daughter, sister, friend or neighbor -- could be, or become, a prostitute. There was every early indication that ABC would choose that narrative. In promoting the interview Friday on "Good Morning America," Sawyer teased viewers: "Tonight, she talks about her choices and why she thinks it could have been any girl next door." The subtext is not so far from the promise of a late-night "Girls Gone Wild" commercial: Watch a good girl go bad! The Web site also provided "Ashley Dupré's Photo Album," with family pictures of her as a baby, an innocent schoolgirl, an adolescent cheerleader and a "pretty popular" high school student. It's an illustrated guide to Dupré's journey from sweet little girl to call girl.

So, what was there to be learned from the 20/20 interview? Not much, considering that ABC leaked much of the goods in its weeklong promotion of the special -- but they could afford to. I suspect that, more than the particulars of Dupré's narrative, we wanted to hear, once again, the story of how good girls go bad.