Get over it, Clinton haters

Obama's choice of rival Hillary Clinton for secretary of state shows his political wisdom. And the vetting suggests the Clintons -- surprise! -- have little to hide. 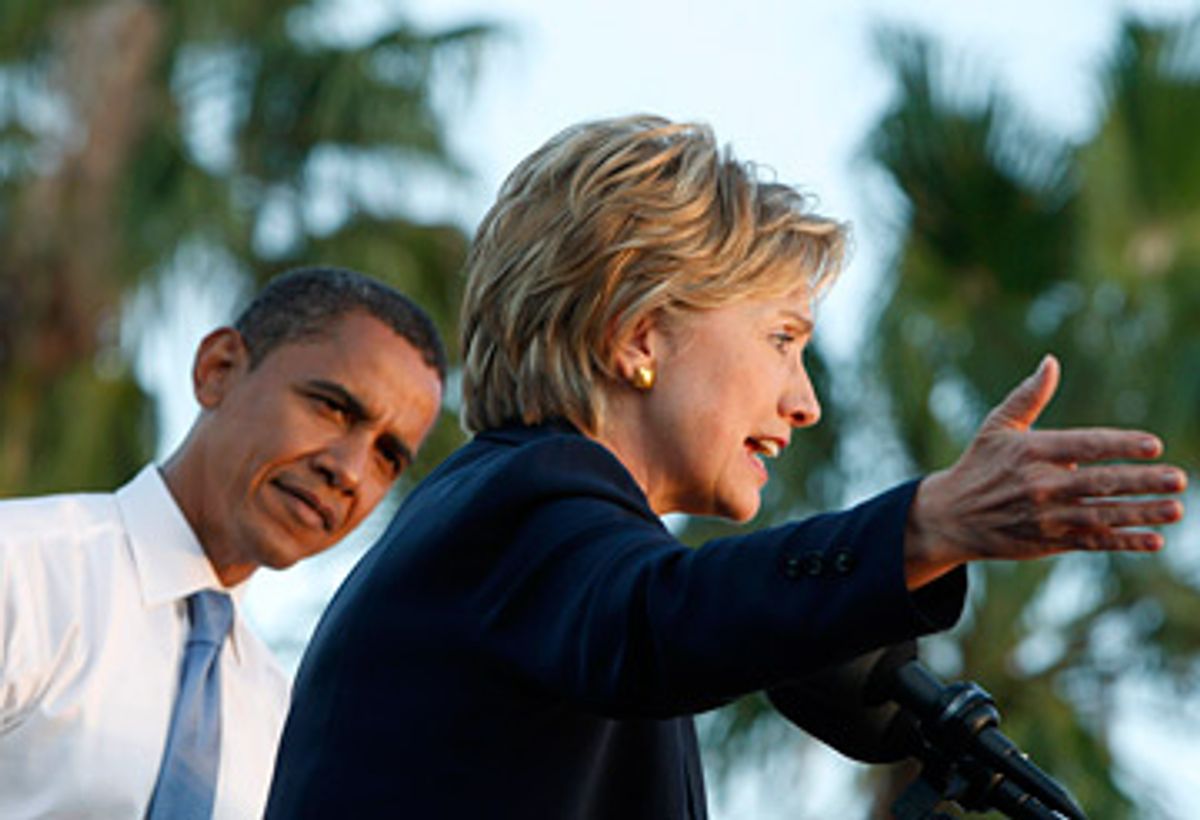 For a broad array of editorialists, pundits and kibitzers, as well as anybody else still obsessed with old resentments against the Clintons, the weeks since Election Day have inflicted a profound sensation of cognitive dissonance, as Barack Obama kept naming the friends and allies of his former rival to run his transition and his government. Now with reports that Hillary Rodham Clinton will indeed be appointed secretary of state, those feelings may even induce a stroke here or there.

Wasn't Obama the One who would exorcise the Clintonite demons from our midst and cleanse the capital of their sins?

Whatever the merits of any of the president-elect's particular personnel choices, he has hardly betrayed the faith of his supporters -- and in fact has displayed the very character and maturity that they always attributed to him. To say the least, he has showed that he cannot be swayed from exercising his own judgment by the petty backbiting of Washington at its worst.

During the process that led up to this moment, Obama no doubt understood that he would be courting disappointment or worse among those whose measure of him depended on his supposed distance from the Clintons. Having encouraged those assumptions as a matter of political necessity, he must have realized within days of his election that if he made selections based on merit, he would inevitably recruit many of the best and brightest of the last Democratic administration.

In the appointment of Hillary Clinton, he has proved as well that he is a supple thinker, capable of changing his views according to experience. To elevate the junior senator from New York into his Cabinet, Obama had to set aside the criticisms of her that he and his surrogates had voiced during the campaign.

If her experience in national security and foreign policy were as shallow as advertised back then, after all, on what basis could he offer her the position of top diplomat? If her judgment were as poor as charged by him and others over the past two years, then why would he place such heavy responsibilities on her shoulders? If her honesty were as questionable as his campaign sometimes claimed, then how can he trust her now?

The answer is not necessarily that his campaign rhetoric was false or insincere, but that he developed respect for her over the difficult months of that harsh contest -- and came to believe that she would be as formidable at his side as she was in his face.

The same contrast between then and now applies to Clinton as well, of course. To be willing to sacrifice her Senate seat -- and an apparent offer to join the Democratic leadership -- she must have come to a very different view of Obama's potential than the skepticism expressed by her and her supporters in the heat of the primary. In accepting this appointment, she will fully endorse his fitness to lead and the soundness of his worldview, without reservation. That acknowledgment goes far beyond the speeches of the general election campaign, which she delivered over and over on his behalf.

Whether Obama's appointments make sense can only be judged when those he has chosen have an opportunity to perform -- a caveat that applies to Clinton along with all the others, from Rahm Emanuel as White House chief of staff to Eric Holder as attorney general. But it should now be clear that the president-elect does not share the jaundiced view of the Clinton administration -- or the Clintons -- held so insistently by some of his own supporters.

For one thing, it should be plain that the exhaustive "vetting" process brought to bear on Bill and Hillary Clinton, and especially on his foundation and his business dealings, must have revealed nothing of grave concern to the Obama transition officials assigned to examine him. If it is true, as reported, that he will no longer accept certain speaking engagements that might pose an appearance of conflict with his wife's position, that would be appropriate. It is equally likely, however, that the good work of his foundation will continue, since the Obama administration could scarcely wish to deprive a million or more impoverished people of the medicine and care that the former president has brought to them.

It will be interesting to see whether those who have raised the darkest suspicions about the former president will accept the benign assessment conferred on him by Obama.

Then again, perhaps this momentous transition will offer a chance to reopen the discussion of various canards about the Clinton years. Insinuations abound, as always, in such matters as the Holder nomination and his role in the pardon of Marc Rich, to take one example. But has anybody noticed that almost eight years later, the infamous financier has yet to set foot in the United States -- or to ask why? When Holder's name comes up for confirmation in the Senate, will anyone examine the real reasons that Clinton gave clemency to Rich -- and who asked him to do so? We shall see.

Meanwhile, the president-elect in his wisdom has repudiated the Clinton-bashing mythology of the '90s. Perhaps that is what he meant when he promised to say goodbye to all the partisan poison of the past.