Barack Obama wants you (to spill your secrets)

Prospective White House employees must cough up an unprecedented amount of detail about their online activity. Is the new administration being smart -- or scary? 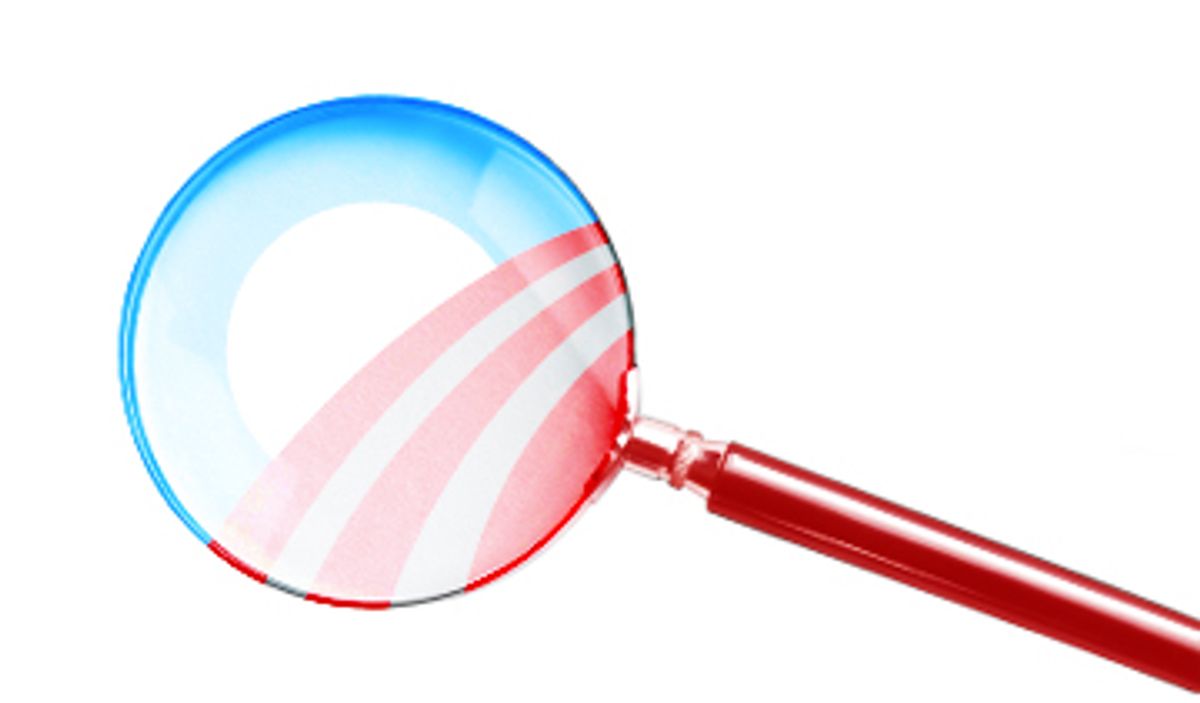 In his first press conference after the election, Barack Obama cracked a joke about Nancy Reagan holding séances in the White House. (It was factually inaccurate; the former first lady was into horoscopes, not "Hellraiser.") This provoked the administration’s first apology, but not the first bipartisan critique. That came a week later, with the release of the administration’s job application.

In 63 questions over seven pages, prospective White House employees are being asked — in addition to questions about finances, gun ownership and, possibly, flossing habits — to list “all aliases or ‘handles’ you have used to communicate on the Internet,” everything they’ve written, “including, but not limited to, any posts or comments on blogs or other websites,” links to their Facebook or MySpace pages and any potentially embarrassing “electronic communication, including but not limited to an email, text message or instant message.”

Three, two, one, controversy! “Mr. Obama has elevated the vetting even beyond what might have been expected,” declared the New York Times on Nov. 13. TV commentators, giddy with White House puppy speculation only hours earlier, expressed concern. The words “intrusive” and “most extensive” were frequently used. Rachel Maddow raised her first eyebrow at the new administration. In a commentary on ABCNews.com, Sam Donaldson wondered if Obama would pass his own vetting (citing question 20, about association with controversial characters).

By now, it’s conventional wisdom that Obama’s transition team intends to “avoid the mistakes” of the Clinton administration, whose early Cabinet appointments were under-researched and ultimately sunk by scandals involving untaxed nannies and undocumented housekeepers. In that view, the prospect of a little rigor seems reassuring. The wounded right is almost certainly coiled to pounce on the first sign of indiscretion. And Sarah Palin — that improper gift that kept on giving — was propelled onto the national stage largely by lazy vetting.

But something about those Internet-usage questions caused a lingering shock. The idea of listing every blog comment you’ve ever made? Laughable. But the imperative to disclose every Internet alias you’ve ever used? Uncomfortable. Unexpected. And more than a little ironic. The grassroots campaign that was incubated — and largely won — on the Internet has now assumed the role of moral groundskeeper, parsing and judging the online behavior of the generation that launched it.

“It reflects, in a strange way, the relatively clean record the president-elect has,” says Paul Ohm, an associate professor of law at the University of Colorado. No one was really able to dig up dirt on Obama. Starting at the very top, you have someone who has laid it all bare and lived to see the next day. So maybe it doesn’t seem exceptional to ask those who want to work for him to do the same thing.” Obama did, after all, confess to drinking, doing drugs and engaging in other youthful indiscretions in his 1995 memoir, "Dreams From My Father."

But how clean will Obama’s staffers have to be? Today, everyone has an extensive Web trail, and young and old alike have embarrassed themselves online, either by accident or an ignorance of potential repercussions. How many members of Generation O, newly roused to the idea of government participation, will be judged unfit because they were playing against rules they didn’t foresee? Will the application have a chilling effect, discouraging potentially qualified candidates? Will the administration be staffed with an army of flavorless Tracy Flicks, resulting in a more conservative White House than we bargained for, at least from a human-resources standpoint?

We don’t know. Clues will become evident only down the road — if and when thwarted applicants choose to blog about it. But, for now, privacy experts don’t agree that the application is all that intrusive. “It may not be a good thing or a comfortable thing, but I think it was to be expected in today’s information age,” says Anita L. Allen, a professor of law and philosophy at the University of Pennsylvania. “If it’s a little bit awkward, it’s because we’ve never had to do this before. In history, there’s never been so many different ways in which embarrassing, salacious or inappropriate conduct can go viral. It shouldn’t be surprising that an administration that’s raised so much money by using the Internet also understands, better than most, the dangers the Internet poses for revealing embarrassing facts about people’s lives. ”

In the application, the words “controversial” and “embarrassing” appear several times. But how do you define either, and what is a disqualifier? An impulsive rant in a comments section? An ill-advised foray into Second Life? Holding a beer in a Facebook photo? Who among us has not sent a text message — or a hundred — that might not embarrass us in retrospect, much less an entire presidential administration? In this sexy, Web-savvy new political era, must individuals with even a cursory interest in future government service comport themselves online like traditional politicians?

“One concern is: Is requesting this information a substitute for a moral vetting?” says Allen. “There are issues to be discussed there, and it might be very troubling, especially to liberals, to think that someone has to have led a conventionally squeaky-clean, perfect life in order to be qualified to work for a new administration. My guess is that this isn’t about morality. It’s about appearances. The Obama administration does not want to appear to be full of people with salacious backgrounds, nor does it want to have to waste time dealing with media publicity around an embarrassing past. There are way more important things to worry about right now.”

Marc Rotenberg, the executive director of the Electronic Privacy Information Center in Washington, says the questionnaire’s level of vetting is appropriate. “I’m not necessarily against intrusive questions,” he says. “What I’m concerned about is the absence of any notable privacy protection that would prevent the subsequent use of the information. It illustrates a larger problem that the United States has: We don’t have good privacy safeguards for the collection of personal data in the private sector. The Obama administration should be credited for the good job they’ve done so far in setting a high bar for ethics in government. But the transition team has dropped the ball in not establishing similar high standards for the privacy of the very detailed information they’re gathering from this questionnaire.”

In some ways, the application is merely an extension of corporate background checks that have been going on for years. “What’s being asked is not qualitatively different from the kind of highly personal information that’s been asked in the past: medical exams, drug and alcohol tests,” says Allen, who is accustomed to being interviewed by the FBI about the suitability of former students for government posts. “Background checks are nothing new. It feels new because the questions are different, but my guess is we’re going to get used to asking these kind of questions.”

In fact, the questionnaire may be ultimately more old school than it seems: Because any disclosures about online behavior are voluntary, they promise to be as effective as other voluntary disclosures usually are. If given a questionnaire about inappropriate online behavior, Mark Foley probably wouldn’t have owned up to his definitely embarrassing chat sessions with teenage boys. “I think asking the questions is more about setting the tone and justifying the later punishment,” says Ohm. “The administration would be fooling themselves if they think they’re immunizing themselves from scandal. Almost every applicant is going to withhold the truly, truly, devastatingly embarrassing thing that’s out there.”

The question about online handles disturbs Ohm a little more. “There, they’re starting to tread on personal, private anonymity in a way that is kind of without precedent,” he says. “I can’t think of another situation where someone had been compelled to give up all of their handles. There are very good reasons you might have an email address squirreled away that no one knows about, and it doesn’t seem fair to have to reveal that to get a job like this.”

Back to Nancy Reagan for a second. In the 2002 story collection "Things You Should Know," A.M. Homes published a short story that envisioned the former first lady leading an elaborate secret life on the Internet, logging on to the Psychic Friends Network as "Starpower," flirting with a middle-aged biker under the name "Lady Hawke" and joining an Alzheimer's support group as "Edith Iowa."

Like the fictional first lady, most of us have found community and enlightenment in anonymity. (Well, in concept.) In recent years, legal scholarship has held that one of the benefits of privacy is one’s ability to try on different masks, to be different people at different times. “There are quite a few very smart people who think this is very essential in self-development as a human being,” says Ohm. “This application is asking you to list all of those different masks next to one another, and link them all to one another: The person who did X is also the person who did Y and also sent e-mail V. That’s a real powerful unmasking. Now the administration has that document, and that may get into the public someday. In some ways, it is forcing us to violate some trust we had — it was the one thing we didn’t think we’d ever be asked, and to get this job we desperately want, this is what we have to do.”

But not all of us, not yet. “This is a fairly rarefied category of people. We have, regrettably, watched celebrities lose a fair amount of privacy over the years. This is the same sort of thing,” says Ohm. “On the other hand, if Obama starts asking this question of the fourth-tier appointees or, God forbid, career appointees, then nothing I’ve said would be true, and I’d be much more alarmed.”

What is clear: The release of the Obama application is the latest, and loudest, in a series of wakeup calls about the conflict between online socializing and professional opportunity, and even those who've never aimed a tourist's camera toward the White House -- much less a lifetime of ambition -- could be forgiven for taking a personal inventory. None of us truly knows which parts of our online selves we'll be asked, or expected, to proffer in the future -- or that no opportunity is worth that revelation. This marks a turning point in what online privacy is, or what we can expect it to be, and our ongoing negotiations between online self-expression and self-care.