The first season of HBO's "True Blood" ends with fried vampires, Bible thumpers and -- of course! -- even more unsolved mysteries. 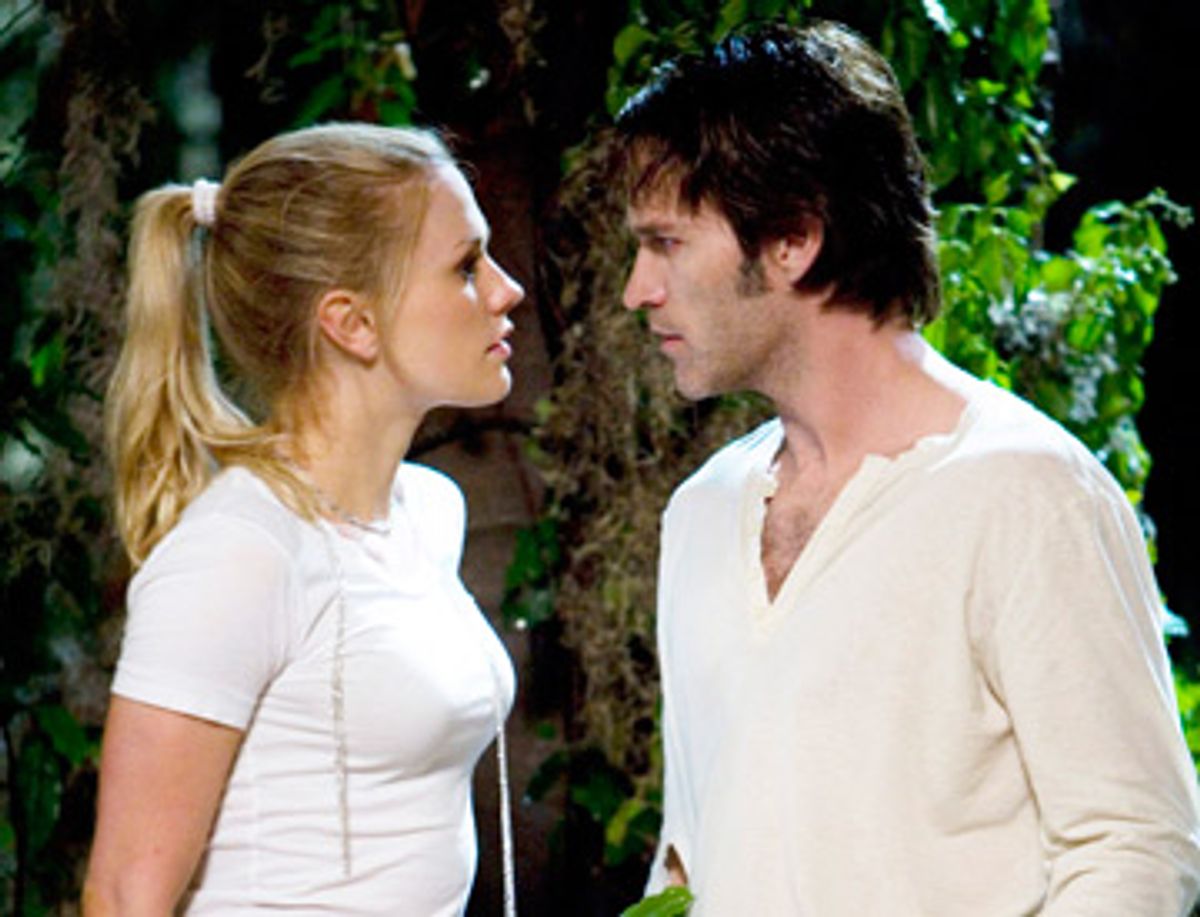 Now at least we know what happens to a vampire when he ventures out into broad daylight: He starts to fry like bacon! His head turns red and black and oozes and smokes! But could Bill (Stephen Moyer) end up disfigured forever, thanks to his efforts to save Sookie (Anna Paquin) from that vampire-hater Rene (Michael Raymond James)? Would Sookie merely pity poor charred Bill, then set her sights on Sam (Sam Trammell) -- who actually saved her life, after all, instead of falling to the ground, a smoking, crispy shadow of his former self?

Personally, if I had to choose between a nice guy who owns a bar and can turn himself into a really cute dog, and a guy who sucks my blood, talks in a creepy accent, has no sense of humor whatsoever, and looks pale and sickly most of the time, I think I'd stick to the dog-man.

But then, if we learned one thing by Sunday night's finale of HBO's vampire series "True Blood," it's that no one knows Sookie Stackhouse's mind except for Sookie Stackhouse herself. So when Bill returned from the grave yet again looking just like his usual ghoulish self, it was no surprise that Sookie embraced him and left poor Sam to lick his wounds -- literally and figuratively.

Put yourself in her shoes, though. If you could read the minds of mortals, like Sookie can, an immortal with a taste for human blood and no annoying thoughts in his head might just look like your dream man, fangs or no fangs.

And while we're at it, if you were a bitter, homeless, drunk woman who's alienated her mom, her best friend and her lover like Tara has, you'd happily take shelter in a rich lady's house, snack on her fresh fruits, wear her pretty outfits and suspend your disbelief over her strange "I just like to help people" story.

The question is, what is newcomer Maryann's (Michelle Forbes) real story? Where did she come from, and why does Sam seem to know her already? Is she some other variety of magical being, a new species that's neither vampire nor shapeshifter?

And what does Sam plan to do with all that cash from his safe? Who attacked Lafayette (Nelsan Ellis) and are those his painted toenails in Andy Bellefleur's (Chris Bauer) car?

Yes, Sunday night's finale ended with just as many cliffhangers as there were resolutions to season-long mysteries. But what else would you expect from a series that's based on Charlaine Harris' "Southern Vampire" series of page turners? If the answers to the big questions felt a little predictable by the show's final episode, that was quickly solved  by introducing a whole new set of questions.

Alan Ball's perverse, off-kilter series has leaned heavily on this formula from the start. Just when one plot point seemed exhausted, a new wrinkle arises, whether it's seemingly nice Sam sniffing a dead girl's sheets or Sookie's grandmother showing up dead on her kitchen floor. Sure, there's something a little dissatisfying about the mystery-around-every-corner format, but whatever "True Blood" lacks in substance, it makes up for in flair. From Jason Stackhouse's nefarious hippie girlfriend to Lafayette's colorful assortment of clients to Bill's good Christian girl turned impatient, bloodthirsty vampire-slut, "True Blood" has paved its own, sometimes rocky path as one part vampire mystery, two parts campy, foolish fun.

The only upcoming twist that looks a little less than promising is Jason Stackhouse's apparent transformation into a born-again Christian intent on snuffing out the evils of vampires from the face of the earth. Enduring the terrible Southern accents on this show is bad enough, without a clichéd herd of Bible-thumping fundamentalists to drag us through every worn-out stereotype in the book. The nice thing about Sookie and Sam and Tara and Bill, after all, is that they're new to us. We're not sure what drives them or what they're capable of just yet. In contrast, those old familiar saccharine smiles and cries of "Praise Jesus!" are just a few clicks away on TBN at all times. To most of us in this country, evangelical Christian shenanigans are old news. When it comes to the second season of this sultry, suspenseful vampire tale, let's hope Alan Ball sticks to some fresh blood.