Hugh Jackman is soulful and strapping in Baz Luhrmann's crazy mess of a movie -- but why won't Nicole Kidman's face move? 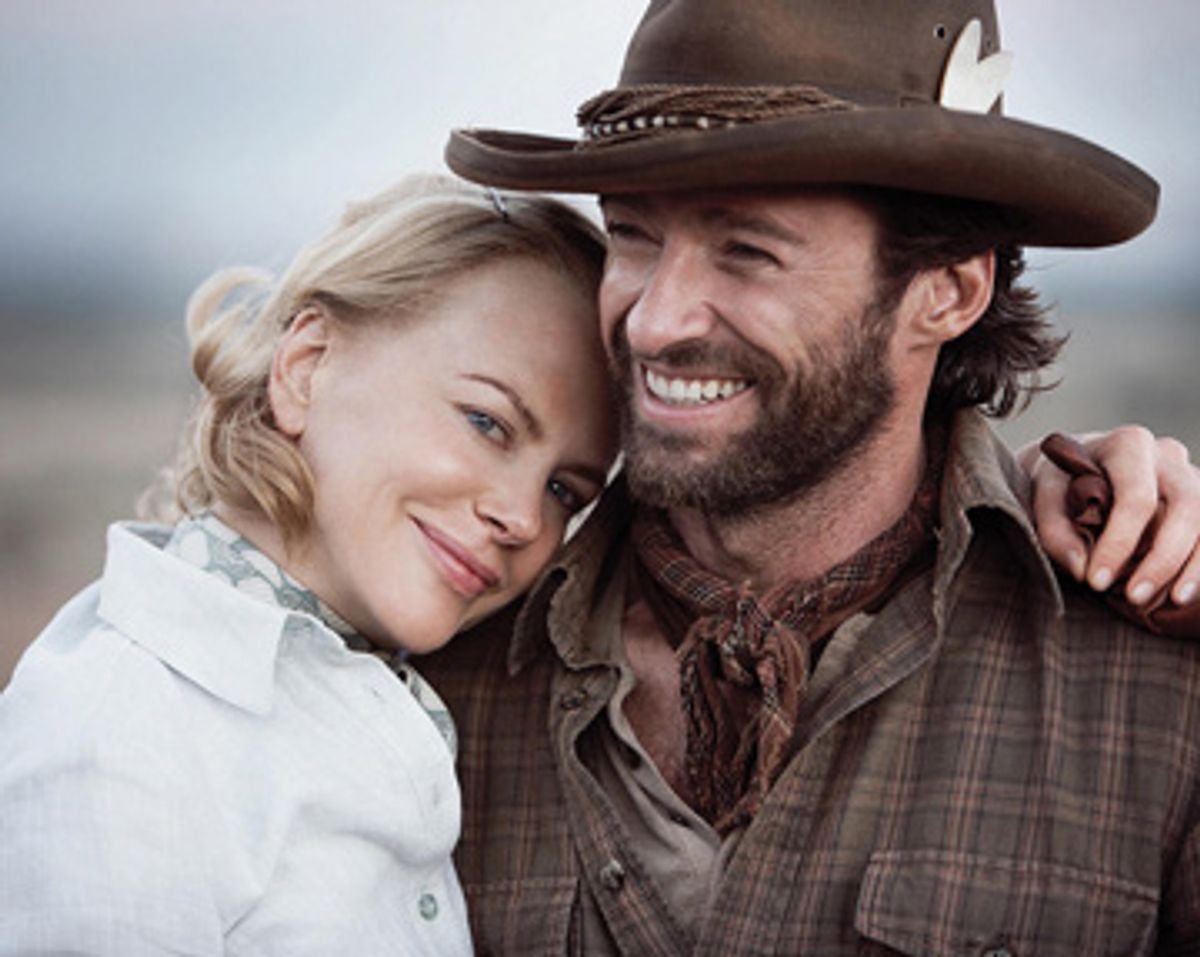 Calling a Baz Luhrmann movie a crazy mess isn't necessarily a damning statement. But it isn't an automatic compliment, either, and "Australia" is the type of crazy Luhrmann mess that needs to be approached with caution and a degree of patience. "Australia" is an ambitious scramble, a sometimes dazzling, sometimes ludicrous epic that strives to meld history, politics, religion and morality into a fat, engrossing story, with two reasonably attractive movie stars -- Nicole Kidman and Hugh Jackman -- at the center.

Luhrmann -- the good-crazy Luhrmann -- has a taste for lavish spectacles, and he places an elaborate set piece smack in the middle of "Australia" that, as I watched it, made me believe the movie had completely recovered from its wobbly beginning and would only get better. Boy, was I wrong: The second half of "Australia," Luhrmann's attempt to pull off a wartime weeper, is so aggressively sentimental that it begins to feel more like punishment than pleasure. I left "Australia" feeling drained and weakened, as if I'd suffered a gradual poisoning at the hands of a mad scientist.

It's possible Luhrmann's movies always have at least a little bit of poison in them: With the exception of Claire Danes' performance, I disliked "William Shakespeare's Romeo + Juliet" the first time I saw it, only to find myself later haunted by it, yearning to see it again. Whatever time-release drug Luhrmann had slipped in there, it worked. Similarly, "Moulin Rouge" drove me nuts with its aggressive romantic excess, but kicking and struggling against it proved futile: In the end, I fainted into its arms.

"Australia," Luhrmann's ode to his homeland, is a much scrappier, dustier movie than his previous pictures (the three of which, beginning with 1992's "Strictly Ballroom," have come to be called the "Red Curtain Trilogy," which pretty much sums up their stylized, colorful, mildly insane qualities). It's also far less focused -- if "focused" is a word we ever want to use with Luhrmann, and we probably shouldn't. Still, when Luhrmann's at his best, his sheer determination and will at least give his movies the illusion of making sense. "Australia," on the other hand, is just a bunch of things thrown into a giant pot. The picture -- whose first half is set in 1939 -- opens with a voice-over, a young boy explaining how he fits nowhere: Nullah (played by an appealing 13-year-old actor named Brandon Walters) is half-Aborginal, half-Caucasian. He appears to possess certain magical attributes, taught to him by his Aboriginal grandfather, a shaman known as King George (David Gulpilil), but he's not yet in control of his powers. His opening dialogue tells us that he mostly feels like a helpless little kid, and the country he lives in is less a haven than a place that threatens to destroy him. For more than a hundred years in Australia -- the practice ceased only in the early 1970s -- children of Aboriginal descent were taken from their parents and put under the care of government agencies and church missions, supposedly for their own welfare, although you don't have to look hard to see blatantly racist motives at work. And so Nullah constantly finds himself having to hide from law enforcement, lest he be taken away from his mother. He lives with her on a spread called Faraway Downs, a stretch of parched, Godforsaken land in the Northern Territory, where she works as a servant. Faraway Downs is owned by an Englishman, and one day his trim whippet of a wife, Lady Sarah Ashley (Nicole Kidman), decides to leave London and join him in Australia. Her guide through this cruel territory is the Drover (he's played by Hugh Jackman, and that definite article is part of his name), a rustic loner who's none too pleased to have to escort some prissy Englishwoman around.

But when they reach Faraway Downs, Sarah finds she needs his help more than she thought: Her husband has been killed (the circumstances are mysterious), and the ranch's scheming station master, Neil Fletcher (David Wenham), is in cahoots with the country's big-cheese cattle potentate King Carney (Bryan Brown) to take over the property. Sarah trades her smart little pumps and slender skirts for (slightly) more practical riding outfits, and, with the Drover's at-first-reluctant help, sets out to save her land.

And that's all in the first 20 minutes. (Did I mention that "Australia" also opens with a flurry of old-style maps, screens full of text giving us helpful historical background, and a nearly incomprehensible section, cut together from meaningless scraps, showing Lady Sarah jumping horses back home in England?) "Australia" is credited to a raft of screenwriters (Luhrmann, Stuart Beattie, Ronald Harwood and Richard Flanagan), and, not surprisingly, the story is something of a mangled entity, with arms, legs and elbows all sticking out the wrong way. Saving the ranch is a big problem only until the Japanese bomb Pearl Harbor, and then Australia: That's when things really get rough for Sarah, the Drover and Nullah, and at that point Luhrmann, too, loses his way. The first half of "Australia" is a celebration of stalwart movie conventions and big movie emotions. But in the second half, Luhrmann gets reckless with his story's sentimentality -- he's loaded for bear, when a lighter touch would be more effective.

That's a shame, because Luhrmann made it nearly halfway to the goal of giving us a grand, entertaining, emotionally enveloping epic. The picture's sense of scale is impressive: Shot on location by Mandy Walker, "Australia" shows the Outback as a kingdom of beige that stretches as far as the eye can see, dotted with the occasional scrubby tree -- it really does look like the edge of the world. The movie's centerpiece is a magnificent cattle-driving sequence in which the Drover and his mates struggle to keep 1,500 head of cattle in check, even as the beasts stampede toward certain danger. The sequence is thrilling, bordering on overwhelming: It's here that the movie reaches its peak of nutball grandeur. It's here that I wish it had ended.

But it didn't. Luhrmann can't control the tone of "Australia," and it's little wonder that early test audiences in the United Kingdom railed against the movie's original downer of an ending: In "Australia," Luhrmann puts us through the paces, emotionally speaking, but he seems to be at least partially aware that he's making a giant cartoon -- his original ending only would have broken faith with the audience. But the ending he's got now is another problem altogether: Luhrmann pieced it together quickly, at the last minute, and it shows -- to the extent that a major character looks to have been literally pasted into one of the movie's final shots.

And then there's the Nicole Kidman problem. Jackman is marvelous in "Australia": Strapping, soulful and frequently perched on horseback, he's an adequately larger-than-life figure in a movie that's trying to be larger than God. But Kidman is something else again. Her line readings are convincing; her voice has a pleasing, bell-like tone; her body is a willowy, graceful marvel. (The production and costume designer, Luhrmann's longtime partner Catherine Martin, does it justice with one killer dress in particular, a dream of a cheongsam made of red printed chiffon.)

But what about that forehead? The colleague next to me asked me what I thought it was made of. I said it might be Melamine -- whatever it is, you could break an egg against it with no trouble. In Luhrmann's vision, "Australia" is a grand, sweeping nation with a rugged history of joy and heartbreak, a land with mystical, magical properties. It is, he suggests, a place where miracles can happen -- but not even it can make Kidman's forehead move.