As Washington clashes over a Big Three bailout, it's ignoring the best cure to the automakers' ills: Universal healthcare. 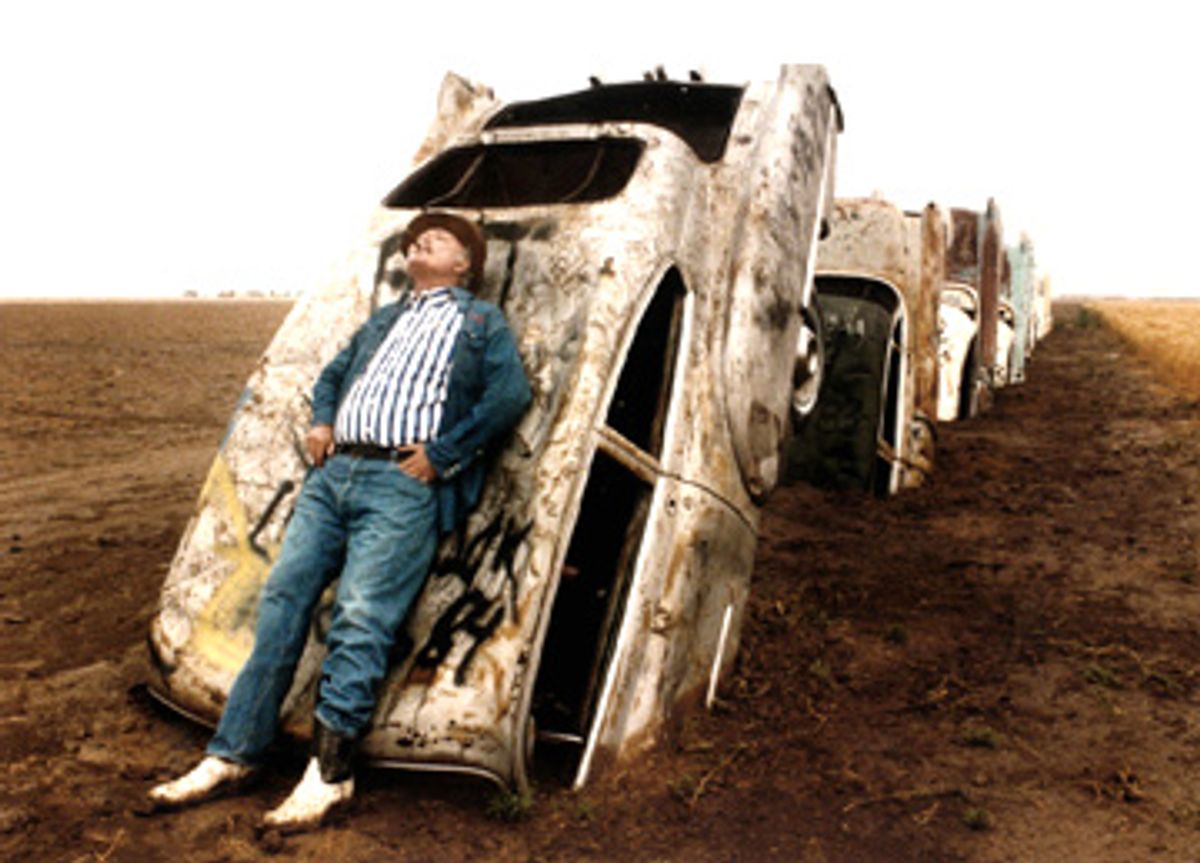 Everett, a longtime family friend, is 94 years old, which means he's been collecting his pension and his health insurance far longer than GM's actuaries counted on paying. If you don't think GM needs help, let me tell you something: they're going to have to keep supporting Everett for a while. He still drives his own car. And he's going steady with a woman half his age.

As the company once known as Generous Motors is learning, that's the bitch of providing workers with great medical care: They live longer, and use more of it.

Everett is also one of the last survivors of the 1936 Flint Sit Down Strike, which forced GM to recognize the United Auto Workers. Factory work has been good to him. He bought a house in the suburbs, across the street from a college professor. Even in retirement, he's loaded. A widower, Everett likes to flirt with waitresses. He always wondered why a server at his favorite diner never smiled at him. When he found out, he gave the woman $14,000 to fix her teeth. A columnist for the Lansing State Journal heard the story and dubbed Everett "The Dental Man."

There used to be a saying: "What's good for General Motors is good for America." It was certainly good for workers like Everett, who grew up in a small town in northern Michigan. Without his GM salary, he could never have bought that house. And without the company's healthcare plan -- among the most comprehensive of any private employer -- who knows if he'd still be around for his 95th Thanksgiving. As politicians hurl abuse at Big Three executives for building gas guzzlers, here's a snap back at Washington: If you'd passed a universal healthcare plan, Detroit wouldn't have had to pay such steep premiums for its workers, leaving more money for innovative research in small cars and fuel efficiency.

Henry Ford liked to boast that he invented the modern era. But he also invented the middle class, when he began paying his workers $5 a day, unheard-of money in an era of cheap immigrant labor. Ford was no liberal, but he figured if he paid his workers well, they'd be able to afford Model As. Thus began a century-long spiral of bigger wages, and bigger cars, that has finally brought the American auto industry to the brink of bankruptcy. Last year, GM -- the largest private purchaser of healthcare in the U.S. -- spent $4.75 billion a year on retirees' medical coverage. That included full benefits for families of workers who took their place on the assembly line right out of high school, and took the 30-and-out before they turned 50. It's one reason the company is $48 billion in debt.

There's no doubt that The Big Three have had a tough time getting over the era when gas was 24 cents a gallon and Vince Taylor and His Playboys were howling "Brand New Cadillac." But they kept building that huge iron because it was the only way to maintain another legacy of the 20th century, the idea that blue-collar workers should live as well as white-collar workers.

GM spends an average $72 an hour on labor, including wages, health benefits and pensions. Non-union Toyota plants spend $42 an hour. Toyota hasn't been building cars here long enough to be stuck with the hospital bills of nonagenarian retirees. The company has plenty of elderly veterans back home -- the Japanese are the longest-lived people in the world -- but guess who pays for healthcare in Japan? The Japanese government. As a result of providing its workers with health benefits that everyone in this country should be getting, American automakers pay over $2,000 more in labor costs on every car they make. The best way to overcome a nut like that is to build big vehicles that you can sell for a big profit.

Were Detroit automakers shortsighted? Absolutely. As shortsighted as a 21-year-old who drops out of engineering school and takes a job in a warehouse to support his ailing parents. American automakers sacrificed innovation to keep building SUVs and trucks that would pay their legacy costs right away.

The strongest opposition to an auto industry bailout isn't coming from environmentalists. It's coming from free-market conservatives who see burying Detroit as an opportunity to bury the United Auto Workers and the entire union movement. Sen. Richard Shelby of Alabama called the auto industry a "dinosaur" and suggested government aid would only delay its well-deserved demise. "Companies fail every day and others take their place," Shelby said. "I think this is a road we should not go down."

The companies that would take GM's place -- Mercedes-Benz, Hyundai, Honda -- all have plants in Alabama, where they benefit from a hostility to organized labor. None of Alabama's automakers are unionized. Do we want to go down Shelby's road? Alabama ranks 46th in household income. Not coincidentally, Shelby has consistently opposed universal healthcare. In 1993, he denounced Bill Clinton's health plan as "ill-conceived, unworkable and unwanted by the American people."

If one Congress member has forever seen that universal healthcare could have been a boon to the U.S. auto industry, it is Michigan Rep. John Dingell. Rooted in the New Deal and the industrial heartland, Dingell embodies the auto industry's traditions. Stocky, block-headed, with safety-glass eyewear, he looks like he should be inspecting the paint job on a Buick. And every year since he came to Congress in 1955, Dingell has introduced a bill for a single-payer national health insurance system. It's the same bill his father began promoting in 1933.

But the political tide has clearly turned against the old Detroit champion. Last week, he was unhorsed as chairman of the Energy and Commerce Committee by Rep. Henry Waxman. Waxman is a Watergate Baby. A resident of Beverly Hills, he is more concerned with air quality in his overpopulated state than with the plight of Midwestern factory workers. (Dingell tried to prevent California from adopting its own auto emission standards, arguing for a nationwide plan.) The 82-year-old Dingell left the meeting on crutches, aptly demonstrating the infirmity of his state and the industry he has defended so vigorously.

It was a clash between liberalism's most powerful wings -- coastal progressives and Rust Belt union brothers -- and it was unfortunate because between them, the two have the solution for saving the auto industry. And neither of them can get there without the other.

Waxman needs to realize that healthcare, environmentalism and the labor movement are intertwined. He would do well to work for a single-payer plan that relieves the burden of healthcare costs on automakers. That may be more difficult now that he has antagonized conservatives by overthrowing Dingell. (Republicans immediately condemned Waxman's election, while secretly relishing the prospect of kicking around the Hollywood liberal.) Even Waxman's hometown paper, the Los Angeles Times, admits its congressman lacks the bipartisan touch:

"There is no doubt that he will pursue Obama's top objectives, such as expanding health insurance coverage and renewable power, much more quickly than Dingell," the Times editorialized. "The only question is whether he will be able to do it as effectively; widely disliked by conservatives and business interests, Waxman might have a tough time reaching consensus with the other side of the aisle."

GM, of all companies, is already looking for ways to reconcile labor and the environment, the Third Coast and the Left Coast. During last year's two-day strike, the company negotiated an agreement that will transfer retiree healthcare to an independent trust fund, maintained by the UAW. GM is expected to contribute $36 billion to the fund -- 70 percent of its liability to retirees. Ultimately, it will save the company $2.5 billion a year. The agreement also allows GM to start new non-assembly workers at $14 an hour, half of what current employees earn.

And GM's pet project these days isn't an SUV. It's an electric car. The Chevy Volt is a plug-in hybrid that will run emission-free for 40 miles on an electrical charge, before switching to a gasoline engine. GM dismissed traditional hybrids as a publicity stunt, and watched Toyota get the green halo. American automakers could use some good publicity, so GM is determined not to repeat that mistake. It's already advertising the Volt on NPR, the station of choice for environmentally conscious drivers who'll pay $40,000 for the first models. (Chrysler also has a line of plug-in hybrids. It introduced them at last week's Los Angeles Auto Show, figuring Californians would be first in line.) The Volt will be a loss-leader, at least at first, but it will demonstrate to consumers and politicians that rock-headed GM is enlightened enough to build a car that Back to the Future's Doc Brown might have driven right out of 2015.

Unfortunately, GM is what you'd call a late adopter. None of its last-minute moves -- the healthcare fund, the new labor contract, the electric car -- will get going until 2010. In the meantime, sales are down 45 percent, and GM is trying to stay alive as it shovels into its savings for $5 billion a month to meet its obligations. The question is: Will the company last that long?

Everett hopes so. I have no doubt he'll last that long. Two Thanksgivings from now, I want to hear him talking about how much he likes his new Volt.