Vince Vaughn and Reese Witherspoon help us make it through the holidays with this funny, gently subversive Christmas movie. 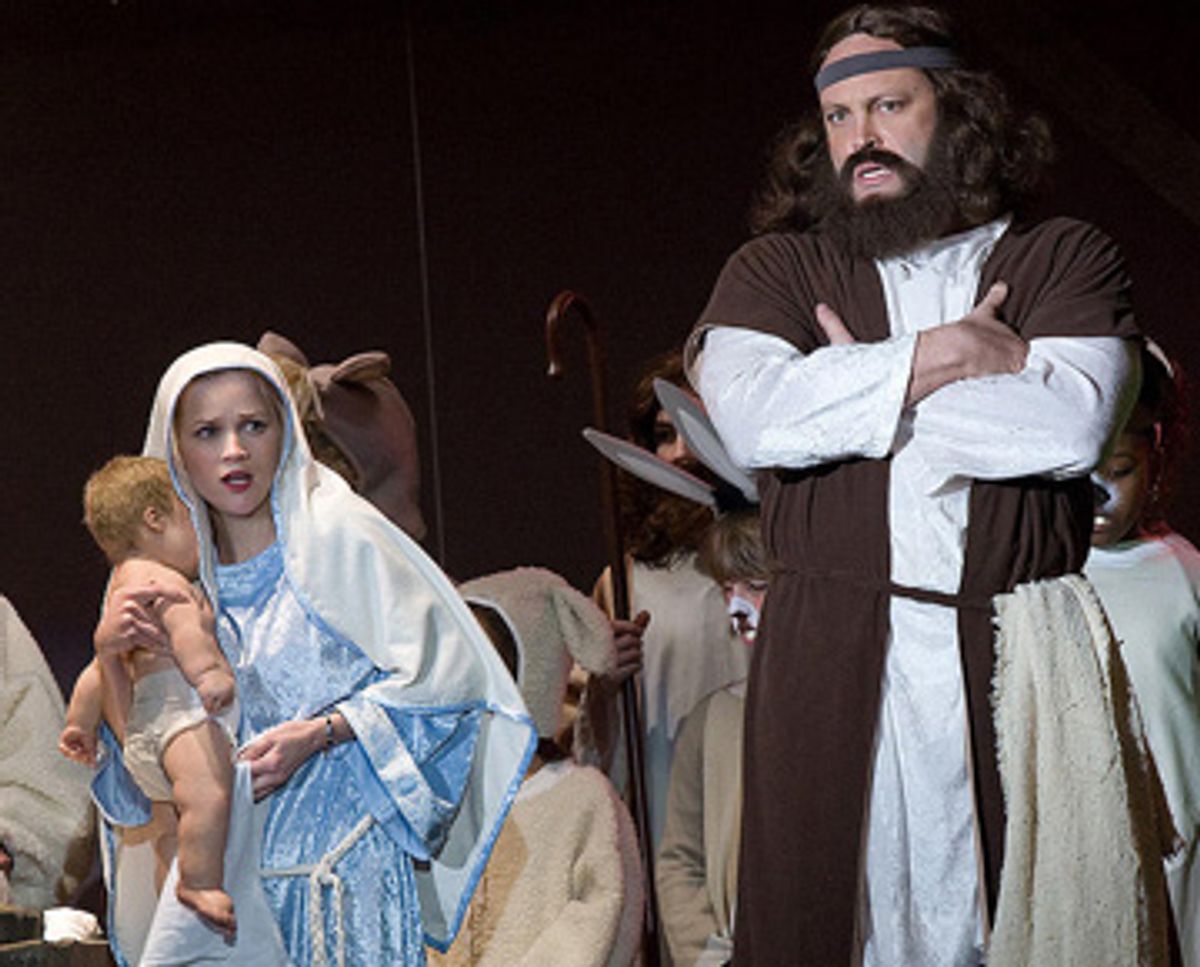 "Four Christmases" shouldn't be mistaken for one of those dismal holiday comedies that gets foisted upon us each year, those slapdash numbers in which subpar gags lead, like a trail of stale gingerbread crumbs, to a falsely heartwarming conclusion. Don't get me wrong -- this is no "Bad Santa," a Christmas picture whose go-for-broke disreputability warms my heart like no other. But "Four Christmases," which was directed by Seth Gordon (who made the Donkey Kong doc "The King of Kong: A Fistful of Quarters"), has a pleasingly cranky quality, particularly for the way it recognizes that at holiday time, the people around us are more likely than usual to remind us that they think we're conducting our lives all wrong. This isn't a "Bah, humbug" holiday movie so much as a "Mind your own business" one -- the kind of movie that many of us can use around the holidays.

Vince Vaughn and Reese Witherspoon play Brad and Kate, a happily coupled couple with no plans to get married or have children. They take dance lessons because they enjoy it: When the other youngish, engaged twosomes around them ask when their big day is -- the assumption being that no couple would want to take dance lessons unless they were planning a wedding -- Brad and Kate reply that they take dance lessons just because it's fun. The other couples press on ever more nosily with their questioning: Don't Brad and Kate ever want to get married? To have a family? Brad replies that they're happy just the way they are, and that they enjoy each other's company -- why ruin a good thing? And no, they don't want to make babies. The other couples' disapproval and dismay hangs in the air like heavy fog.

But it isn't as heavy as the actual fog that ruins the Christmas getaway Brad and Kate have planned. Brad and Kate have been dating for several years, and at Christmastime, they always sneak away from their home in San Francisco to some exotic locale, avoiding the obligatory visits to their respective homesteads by telling their families they're doing humanitarian volunteer work in a foreign land. (Brad gets on the phone to his mother and, wearing that classic Vince Vaughn poker face, tells her that he and Kate are on their way to Burma to inoculate babies.) But this time, the fog prevents their plane from taking off, and a reporter from a local television station pounces on them, shoving a microphone under their chins and asking them how it feels to have their holiday plans ruined. Outed -- there's no doubt their families have seen them on the news broadcast -- Brad and Kate are forced to spend Christmas day with their blood relatives. And since both sets of parents are divorced, that means reckoning with four families instead of just two.

Gordon and writers Matt R. Allen, Caleb Wilson, Jon Lucas and Scott Moore (from a story by Allen and Wilson) sometimes go for the too-obvious gags, like putting off-color language in the mouths of senior citizens. But largely, the movie works because the performers (including Sissy Spacek, Jon Voight, Mary Steenburgen and Robert Duvall) appear to be having great fun with the material. Gordon's best not-so-secret weapons, though, are his two stars: Vaughn and Witherspoon are an inspired pairing, not least because they're such a mismatched set of salt-and-pepper shakers. Vaughn stands tall, a good-looking lug who's reached the age where he's developed a slight gut that makes him all the more human and believable, and his laid-back prickliness is a great contrast to Witherspoon's mighty-mite can-do perkiness. Witherspoon gets to do more here than be the tiresomely winkly, twinkly America's sweetheart she's been playing for years now (in her comedy roles, at least). She stands up to Vaughn, even though she needs 4-inch heels to do it.

And Vaughn plays beautifully off Witherspoon's slight prissiness, deflating it every chance he gets. There's a little of Bob Hope in him: He has an impatient, snappish quality; he has no patience for morons. And in general, he seems to have a fine time sending up the vanity of the characters he plays: Here, Kate and Brad get drafted into playing Mary and Joseph in a Nativity pageant, and Brad willfully upstages not just her but the baby Jesus himself. (He hogs the spotlight by stealing the swaddling clothes.)

But mostly, Brad and Kate are partners in crime, united against the expectations of their respective families. (That's particularly important considering the way Kate's sister, Courtney -- played by a pneumatic, demented-looking Kristin Chenoweth -- looks upon her as an inferior being because she hasn't yet popped out any babies.) The movie's ending is funny and gently subversive, an acknowledgement of the way life often hands over the damnedest surprises. It's also a reminder that every couple has the right to forge their own way forward -- and maybe doing it your own way is the only way. "Four Christmases" is about the joy of freeing yourself from the tyranny of the family you're born into. There's nothing wrong with making up your own family as you go along.