Damned for all time

In its last episode, "The Shield" drops the curtain on its groundbreaking dirty-cop tragedy. 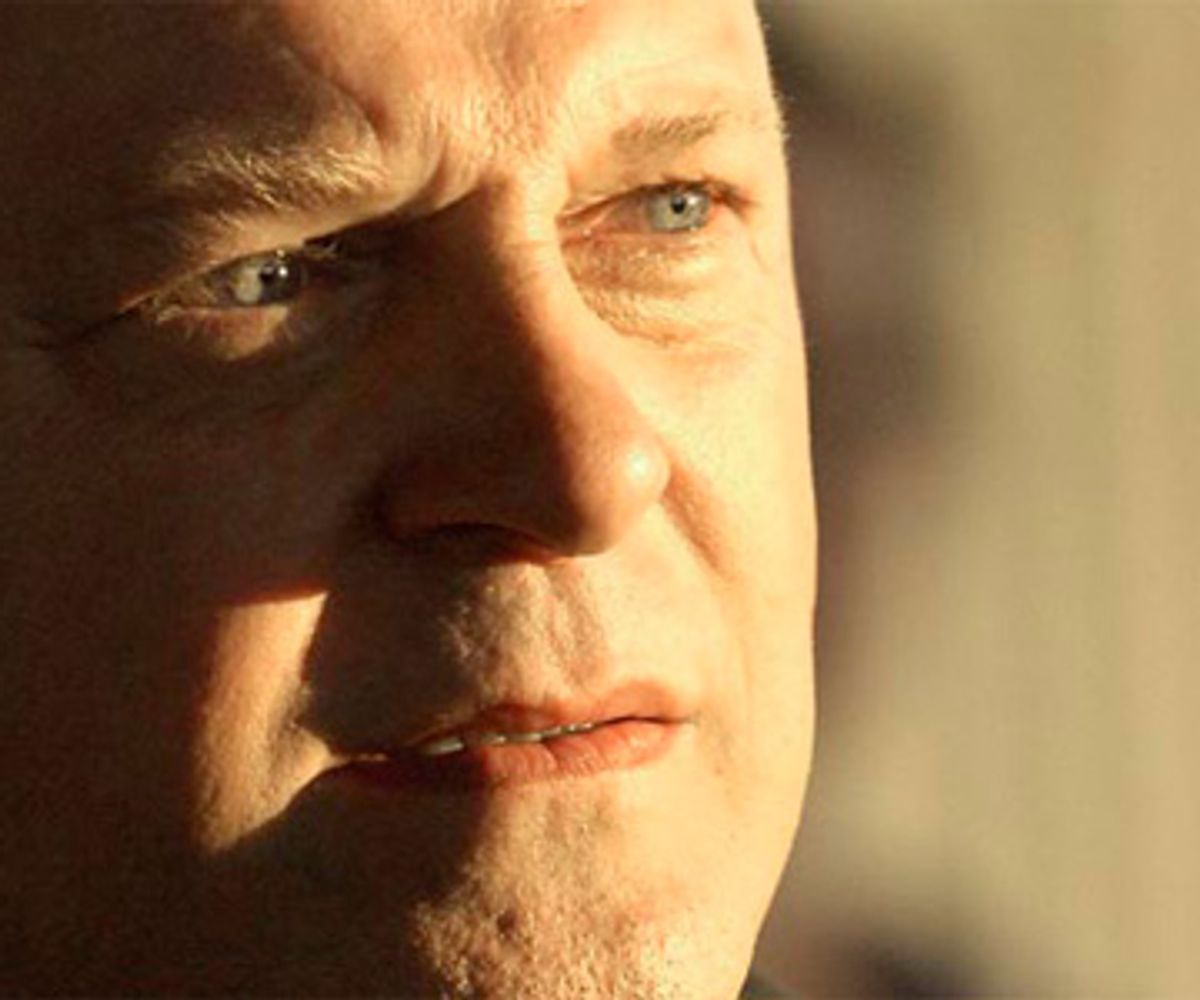 Holy mother of all finales!

So Vic Mackey finally goes down. But not in a hail of gunfire from Claudette's troops. Not in a prison cell, beaten to death by longtime foe Antwon Mitchell. Not in a bloody explosion rigged by the Mexican drug cartel. Not in a deadly standoff with former sidekick and current coked-out desperado Shane Vendrell.

No. Instead, Vic lands in his own version of purgatory, an infernal pit of computers and ergonomic chairs, imprisoned by the fuzzy gray walls of his cubicle cell. He sold out his last friend, Strike Team member Ronnie Gardocki. He drove his prodigal son, Shane, to kill himself, his pregnant wife and their 2-year-old son. He caused his ex-wife, Corrine, to flee and join the witness protection program so that she and their three kids would never see Vic again. And thanks to Vic's unnervingly arrogant confession in the penultimate episode of the series, loyal fans weren't hoping to see Vic snake out of his dirty dealings after all.

But in that last scene of the finale, where Vic looks as neutered and out of place as an angry bear stuffed into a white-collared shirt and a suit, we had to wonder: Is Vic Mackey really going out like that?

Those final moments were almost unbearable. Vic sits in his cubicle and places his framed photographs of his children, one by one, across his desk, his bloodshot eyes skittering about in misery. Could this really be Vic's fate, the ultimate karmic payback, demonstrating that, sometimes, snaking out of prison and death for the trillionth time isn't all it's cracked up to be? Is it even physically possible for Vic to spend the balance of his days playing by the rules and quietly doing his job to avoid incarceration?

Then Vic unlocks a safe beside his desk and pulls out a gun. Suddenly, it all seems clear: He's going to kill himself!

Vic stares at the gun for what feels like a long time. Then he tucks it into the back of his shirt, gets up and walks out of the office. Yep, that's right. This guy is going to wriggle his way back into the action, just like he always does.

The same can't be said for Shane Vendrell, of course, whose downfall in the finale served as a telling counterpoint to Vic's: Whereas Vic made a series of smart (although in many ways self-serving and tragic) decisions to keep himself and his family safe from prosecution, Shane made one terrible choice after another, from hiring an untrustworthy thug to kill Ronnie several episodes ago to sticking around L.A. conspiring to nail Vic (whom he should know by now is far too cautious to get caught like that, even when he's in the dark about his ex-wife cooperating with a wiretap) to clumsily attempting to scam a couple of sleazy gamblers for some quick cash.

Shane's worst move of all, though, was his failure to keep his pregnant wife out of his ludicrous schemes. There were countless points along the way where Mara could've simply claimed to have been held hostage, thereby keeping their toddler and their unborn child safe. Even as Mara irrationally scrambled to keep him from going to jail, Shane should've recognized that the second she got involved in one of his sloppy crimes, they'd both go to prison and their children would be in danger of being thrown into foster care.

Of course, that was the final nail in their coffins, the ultimate unbearable thought for two hopelessly self-centered parents. Theirs was the kind of thinking that compels controlling, desperate fathers to kill their entire families when they're bankrupt or about to go to prison. Self-centered, egotistical men like Shane would rather kill their kids themselves than to think for a second that their offspring would view them as failures who served them up to an unforgiving world.

In contrast to impulsive, confused Shane, Ronnie was prepared to stand by Vic to the end. What made Ronnie's downfall so heartbreaking was that it had nothing to do with his own bad decisions. He was following Vic's lead, trusting his longtime partner to protect him. He even had a very rational plan to skip town a few episodes back, but Vic talked him into sticking around, in the hopes of securing an immunity deal for both of them. That's why Ronnie's arrest and realization that Vic had betrayed him constituted the most grueling moment of the whole finale, more grueling even than seeing Shane and his family dead, since Shane's short-sightedness seemed to seal their ugly fate a long time ago. Unlike Shane, Ronnie was smart and practical, but he was done in by his trust in Vic, who finally proved that he was willing to sacrifice almost anyone for his own survival.

Anyone but his kids, that is. In fact, just as Vic and Shane represented opposite decision-making styles in the face of disaster, Corrine's story may have served as the perfect corollary to Ronnie's. Instead of trusting Vic as Ronnie did, Corrine began to worry that Vic would not only bring his family down with him, but he'd be willing to hurt her in order to avenge her betrayal in collaborating with the cops to get him convicted. By failing to believe that Vic would put his family before himself, Corrine struck the worst blow to Vic that anyone could've: She whisked their kids away, never to see their father again. But Corrine's fate may be as tragic as Ronnie's, for opposite reasons: She was forced to turn her life and her kids' lives upside down, when realistically, she may have been better off trusting that Vic would never hurt them.

Losing contact with his family will undoubtedly be the great tragedy of Vic's life. Even so, the guy is a survivor, not a martyr. He may be fiercely protective and loyal to his ex-wife and kids, but he's not a hopeless romantic like Shane is -- and a fat lot of good that romanticism did Shane's family, in the end.

These contrasts between the main characters in "The Shield's" nerve-rattling finale underscore the elements that have made this show so head-spinningly fantastic from its first season forward. Because, while casual observers wouldn't necessarily sum up "The Shield" as a character-driven drama -- what with the frenetic, shoot'em-up pace and the rotating procedural story lines -- the action on-screen always turned on the very distinct strengths and flaws of its lead characters. Shane was romantic but unpredictable. Ronnie was steadfast and patient and trusting. Corrine was loyal and willfully suspended her disbelief, but when the veil was finally lifted, she became fearful and irrational. Each of Vic's associates was doomed by his or her most essential traits as a human being.

But then, when it comes to dealing with the devil, no mortal human can expect to win.

And what of the devil himself, Vic Mackey? As he said in the show's penultimate episode, of his ability to commit murder and double deal on the streets without getting caught, "I was too good." (Nice word choice, by the way -- the bad, bad cop with so much swagger that he'd dare to marvel at how good he was.)

But ultimately, it's Vic's incredible skills as a scheming, double-crossing bastard, his uncanny ability to remain untouched, to sidestep prison and death, to keep his family out of harm's way that lands him, tamed and emasculated, in a sterile, static hell of his own making. He can brandish his gun on the sly, he can dodge death at every turn, but will this haunted man ever be truly happy again?

More likely, he'll spend his days chained to a desk, mourning the loss of his family, and spend his nights skittering around like a cockroach, always keeping an eye over one shoulder, waiting for one of his countless enemies to finally get revenge.

Yep, that's probably an appropriately torturous fate for the dirtiest, nastiest, most arrogant, merciless, self-serving cop in the book.

But man, we're gonna miss that sorry son of a bitch!